Polly debates whether to boycott Christmas and celebrate the Summer Solstice instead.

Last week we stayed with a couple who’ve decided to turn their backs on Christmas Day celebrations. Despite both growing up in households that lauded the event, the staunch pair doesn’t feel they’re depriving their three young children of festivities.

‘We celebrate other things,’ their mum told me. ‘Like Matariki. They get gifts for that.’
Christmas is coming, but up here in the Far North, several families I know have abandoned December 25th as their big day, feeling it’s been hijacked by commercial interests. Some choose to celebrate the Summer Solstice instead. We’ve been to a few of the local gatherings held to mark this longest day – dawn ceremonies held in dewy fields as the sun’s first rays strike the lightening sky; afternoons of merriment and music-making; still evenings made magical by candle-lit circles. Down at the Bush Fairy Dairy, everyone’s invited to dance around a rainbow-ribbon pole. 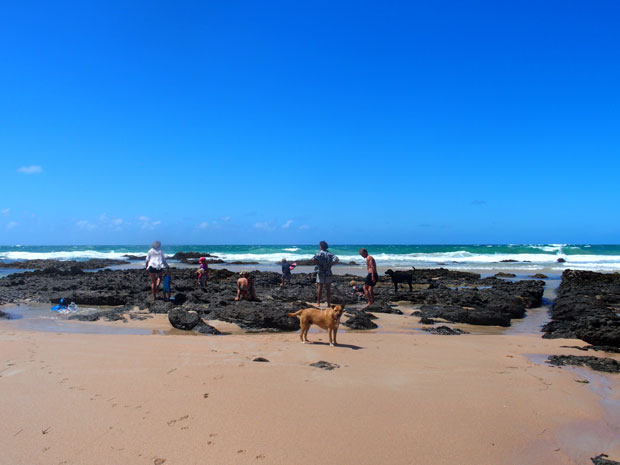 Christmas Day at the beach

‘Bloody hippies,’ some might say, but there is something quite special about observing our side of Earth swinging as close as it gets to the sun before beginning its long journey back towards winter’s long nights. Another nice feature of Midsummer’s Day is that it flies under the retailers’ radar. There’s no advertising assault, no merchandising and no directives as to how the day should be spent. Feast or fast; it’s up to individuals to insert the meaning and traditions according to their personal creativity and spirituality.
When five-year-old Vita was a baby, I was all for our family saying sayonara to Santa and adopting the Pagan day instead.

‘It’s not like we’re Christians,’ I said to James, enthusing how we could weave a new mythology around gift-bearing fairies in place of the fat man in the red suit. I wanted to get away from a day that seemed increasingly synthetic, artificial and contrived.

Yet although our Far North forest home is isolated, we’re still tethered to a society that embraces Christmas Day and as Vita grew, she very quickly tuned into its tradition of tinselled excess and candy-cane indulgence. The Solstice Fairies visited, but it was Santa she wanted to leave a cookie for.

I was not resolute in the face of festive frivolities. Indeed, denying my daughter yuletide cheer made me feel decidedly Grinch-like as I recalled all the magical memories generated during Christmases of my own childhood.

‘Oh for god’s sake! Stop being so earnest, pour a glass of bubbles and enjoy the damn day,’ sighed a voice in my head. And so we cut the pine; hung the stockings; sang the carols and ate the feast.

This year Santa’s in disgrace; angrily banished from Vita’s imagination ever since last Christmas Day when he failed to leave her a longed-for unicorn, but she again wants the tree and its trappings; the laden table, the gathering of loved ones, and the plethora of presents. 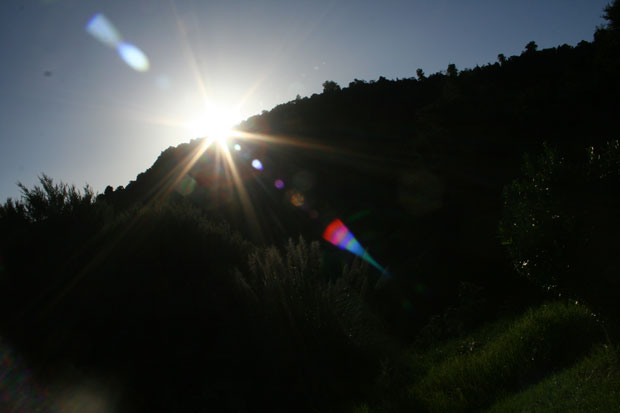 Celebrating the dawn rising on the Summer Solstice.

My mum has informed Vita about it being Jesus’s birthday but what I’ve realised is that it’s up to James and me to give the day meaning. Yes, there’s a tree. The reason we decorate it, I tell Vita and two-year-old Zen, is to honour how important trees are for the health of our planet.

The star on top reminds us to keep making wishes while the Christmas Angel says there is magic about if we choose to believe in it. There are gifts to unwrap, but Vita also chose a present she really wanted, and we gave it to a charity distributing supplies to the homeless.

Giving is a tradition to cultivate, as is togetherness. We’ll be doing that with a beach picnic for whanau and friends who like to share fun, food and laughter. In the afternoon, Vita has asked if we can create a group artwork on the sand. Maybe that too, can become a custom.

If December 25th isn’t going to be just another day, I want it to be a celebration of things we value. I’m holding onto the Solstice celebration as well. The way I now see it, opportunities to weave a little magic into the ordinary and make days extraordinary are to be embraced.
Happy Solstice, and best wishes for a joyous Christmas Day. x x x