Buller: What to do, places to eat, where to stay on the West Coast 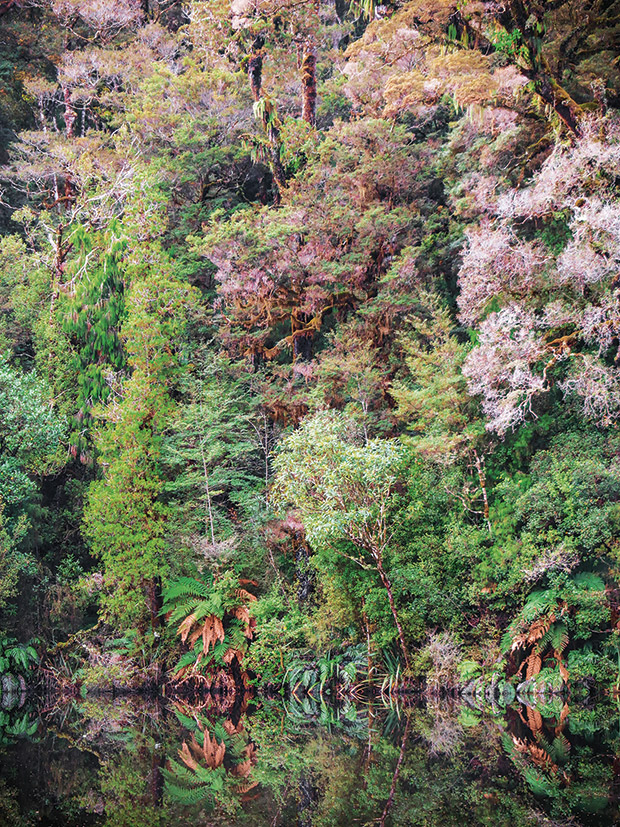 From the cathedral-like limestone passages of the Ōpārara Basin to small, well-worn coal towns, the isolation of the Buller district feeds the soul.

Entering the Buller district north of Greymouth and west of Murchison is like popping through the wardrobe into Narnia. At some point, one begins to notice the genuine greetings of “Morning cobber” and the welcoming can-do attitude.

This prized local trait, grown in isolation and coal dust, is passed down the generations. Being local in this part of the world means having been in residence for at least 30 years. Until then? Nope. Not a local. 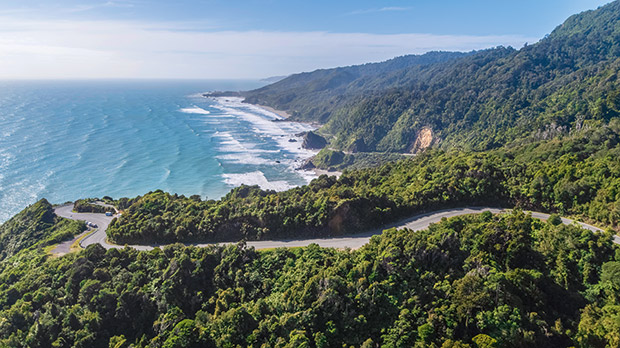 Approximately 10,000 people today call the Buller district home and half of them live in Westport. That leaves the outlying areas, in which case, companionship often comes in the form of the plucky native wildlife.

Buller covers a large area, so getting from one place to another can take time. Remove the watch and turn off the phone – there’s driftwood to collect from beaches, tunnels to creep into, arches to discover, pubs with warm fires and locals with stories to tell.

MUST DO: THE ŌPĀRARA ARCH

Every step on the short walk to the Ōpārara Arch is magnificent, so by the time the arch comes into sight, it seems fair to assume that all astonished breaths will have been taken. Not true. This towering limestone formation will always steal just one more gasp. There’s a shiver of magic in this remote part of the country and photos, frustratingly, do not do it justice.

The Ōpārara Basin is an isolated (almost untouched) area of the Kahurangi National Park. The forested land consists of 350-million-year-old granite, covered in limestone and mudstone, which time has shaped into staggering formations of caves and arches. The area is home to many native species, including the rare short-tailed bat, the giant land snail, and it is a sanctuary for great spotted kiwi. There are two arches accessible from the lower Ōpārara car park; the 43-metre-high Ōpārara Arch (a walk of one kilometre each way), said to be the largest limestone arch in Australasia, and Moira Gate (a 1.2 kilometre, or a four-kilometre loop walk to Mirror Tarn). Moira is the smaller of the two at 19 metres but no less picturesque. Despite the river’s cola colour, the water is crystal clear as it wanders through the cave.

The water of Mirror Tarn, surrounded by thick native bush, is so still it’s hard to see where bush ends, and reflection begins. It’s 600 metres from the parking area (drive over the bridge and turn right). The sandflies can nip through jeans, socks and jackets so be warned as they will make a meal of walkers stunned into immobility at the view. There is an upper car park 2.5 kilometres further along the road where a short walk leads to the family-friendly Crazy Paving and Box Canyon Caves. 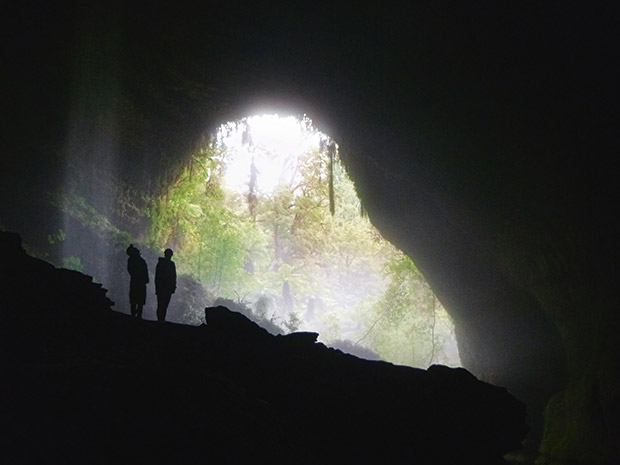 The “crazy paving” is the result of thousands of years of dried mud deposits; this is a happy home for spiders and wētā, so take a torch to keep one eye on their movements. The rock-hard walls of Box Canyon are just as intriguing with nooks and crannies to explore — shuffle along narrow sections to discover shells on the cave floor. Don’t forget a torch but do turn it off occasionally to coax a small beam from the resident glow-worms.

This 100-kilometre section of road is witness to an eternal tug of war between the elements. On a good day, the blue ocean and green bush on either side are blindingly pretty, and on a rough day (never bad), mist, cloud and spray combine in a grey temper tantrum. 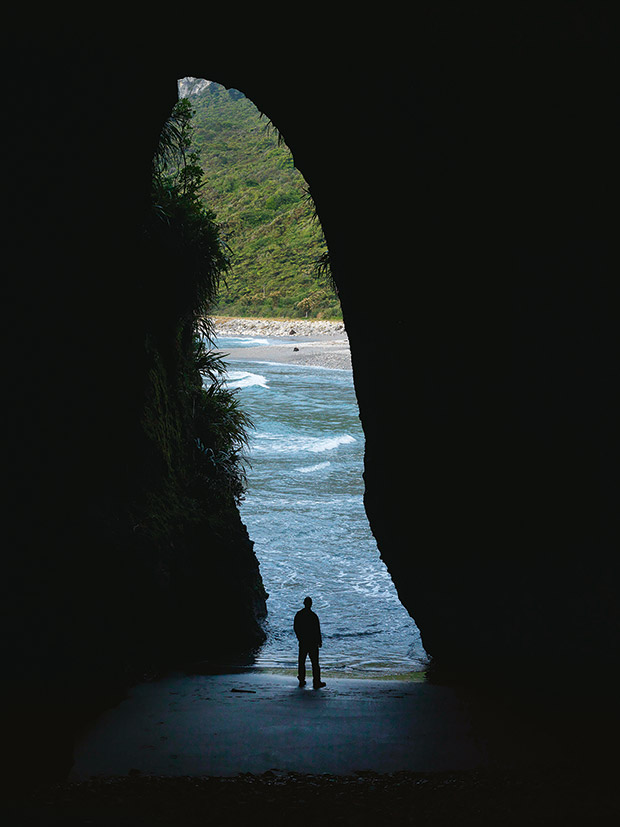 Rocky fingers reach from the sea to the sky, while the constant friction of sea against land carves the limestone cliffs. The Great Coast Road between Westport and Greymouth has been well-traveled over the past 150 years and asphalt may have replaced horse-trampled tracks, but this slice of coastline remains a land of intrigue and hidden potential.

Pull over where the Fox River meets the coast for a two- to three-hour walk that leads to limestone caves (see image above) and the Ballroom Overhang. The walk starts at the Fox River car park.

Double-layer toasties. That’s all that needs to be said, really. Vinnie’s Café in Karamea may be one of the few options in town, but that doesn’t mean that the food is anything other than worthy. Vinnie first visited the West Coast two decades ago for a weekend but made it home 10 years later. He honed his skills in cafés along the coast before settling in Karamea to sell coffee from a yurt. As his popularity grew, he expanded inch by inch. “We began with a panini press and a tiny fridge, and have got bigger each year. It’s a local haunt; the Bush Lounge [part of the space] hosts music and events, plus there’s a gallery upstairs for local artists.” The community radio station also runs out of Vinnie’s, with the locals taking turns to spin the decks (and perhaps a yarn or two). Tune in at 107.5FM. Vinnie’s whitebait sandwiches are famous in Karamea — what can beat whitebait and white bread?

Give glamping a go

Nature paints a masterpiece each time the sun sets below the horizon of the Tasman Sea. Woodpecker Hut and Fox Hut are two glamping stations managed by Jed Smith, a long-ago Fox River local. Jed grew up at Katajuta, a commune based at Fox River, and knows everything possible about this remarkable part of New Zealand. 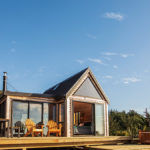 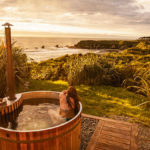 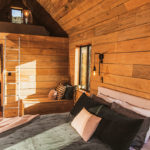 Fox River has long drawn dreamers, wanderers and thinkers, and many still call it home. Time a glamping stay with the Fox River Market, held on Sunday mornings during summer. Food, creativity and crafts abound.

This is an excerpt from The Insider’s Guide to New Zealand 2020. Click here to order your copy.