Ōamaru: What to do, what to eat, and where to shop along the town’s quirky Harbour Street 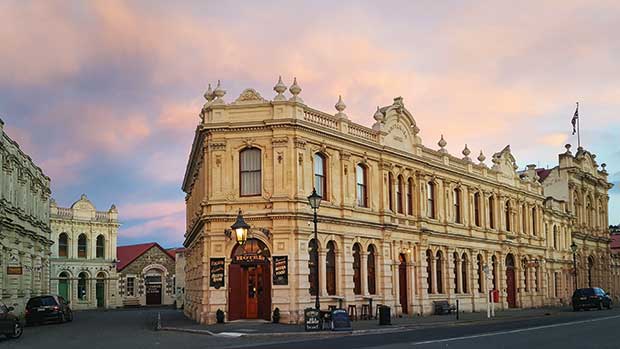 This is an excerpt from The Insider’s Guide to New Zealand 2020. Order now for the special pre-order price $15 (delivery last week of Nov). *Offer expires 24 November 2019

There is no such thing as a typical day on Harbour Street in Ōamaru. With residents including artists, painters, bakers, brewers, creators and steampunk experts, anything is possible. A magical sense of wonder and “what if” has transformed this once rundown street into one of New Zealand’s great attractions.

Although considered magnificent today, the use of limestone arose as a straightforward solution to a problem – the land had been largely deforested, leaving the settlers without timber for building. Instead, they turned to the now-famous white stone. 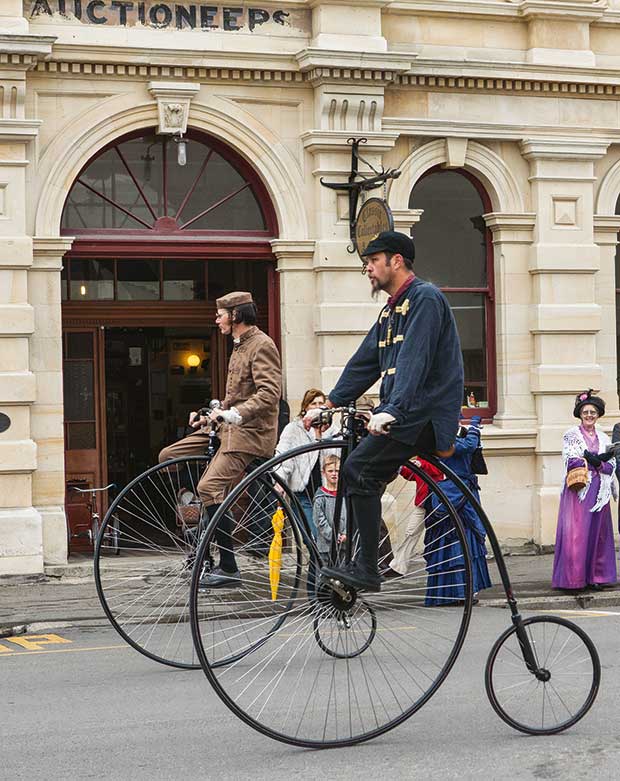 As tough economic times hit Ōamaru, many of the buildings fell into disrepair, and some were demolished. What remained was destined for a similar fate before a group of like-minded people intervened.

The Ōamaru Whitestone Civic Trust was established in the late 1980s to preserve and protect a then-derelict street. It now owns 17 of the historic buildings around the precinct.

“It was set up by people who believed in it. Our heritage is Ōamaru’s future, and people have a real passion for it,” says chair Graeme Clark, who himself has a penny farthing in the garage and a wardrobe of Victorian garb. What is steampunk? It’s Victorian-meets-steam-powered mechanics, with a dash of sci-fi, a touch of class, and the frenetic, creative energy of a mad scientist. The genre is a little bit strange, a little bit weird and incredibly fun. Not to worry if it’s a bit of puzzle – that’s part of its charm.

The origins of steampunk are slightly ambiguous. Many creative works have nods to the aesthetic. But the honour of coining of the name goes to writer Kevin Jeter, who wrote in a 1987 letter: “Personally, I think Victorian fantasies are going to be the next big thing, as long as we can come up with a fitting collective term… something based on the appropriate technology of the era; like ‘steam punks’, perhaps?”

Steampunk is more than a look or “costume” but a way of viewing the world. There are no constraints on imagination, which must be thrilling for those spending their days in a traditional nine-to-five job. 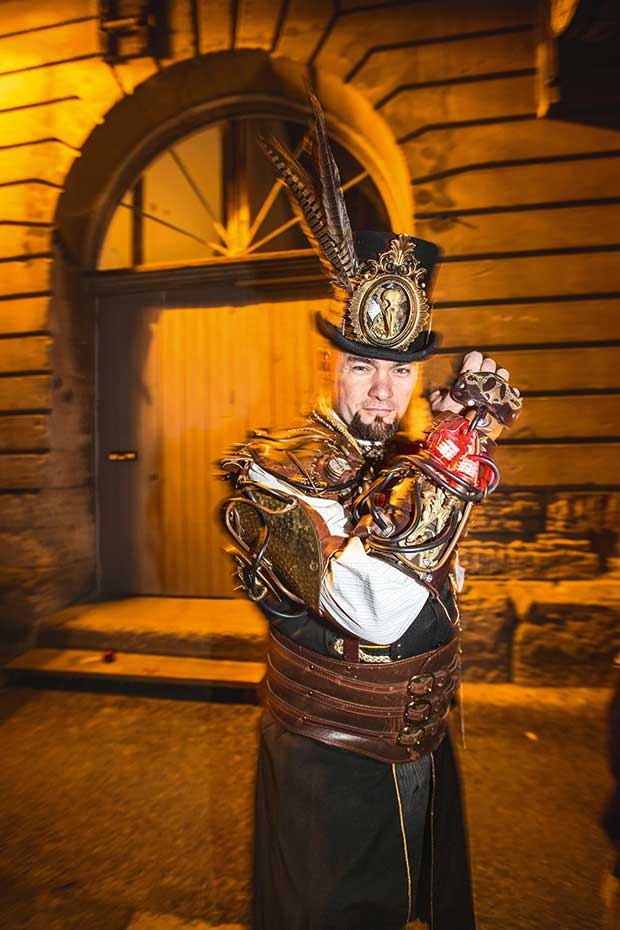 In the past decade, Ōamaru has become an internationally recognized steampunk hub. The town appears to have wrapped it in a copper-clad, top-hatted, cogs-and-gears-decorated embrace.

Locals have run with it, with credit coming back to one in particular: Agent Darling, AKA Iain Clark, a manufacturing jeweller whose handcrafted steampunk beer mug kickstarted a revolution. One cup turned into an exhibition, which became the most important and longest-running steampunk festival in this hemisphere.

Nothing is quite what it seems, which may be just as well in the case of the Doomsday Clock. Described as an “exhibition space and art gallery”, Steampunk HQ is slightly mad but wildly fun. Just don’t expect to be able to answer when the kids ask, “What’s that?”

Miss Purple is a school-bus driver by day and steampunk queen by night. She was introduced to steampunk at a ball in 2011, and as she drove home to Cheviot with cheeks sore from grinning, she knew she had found her place. 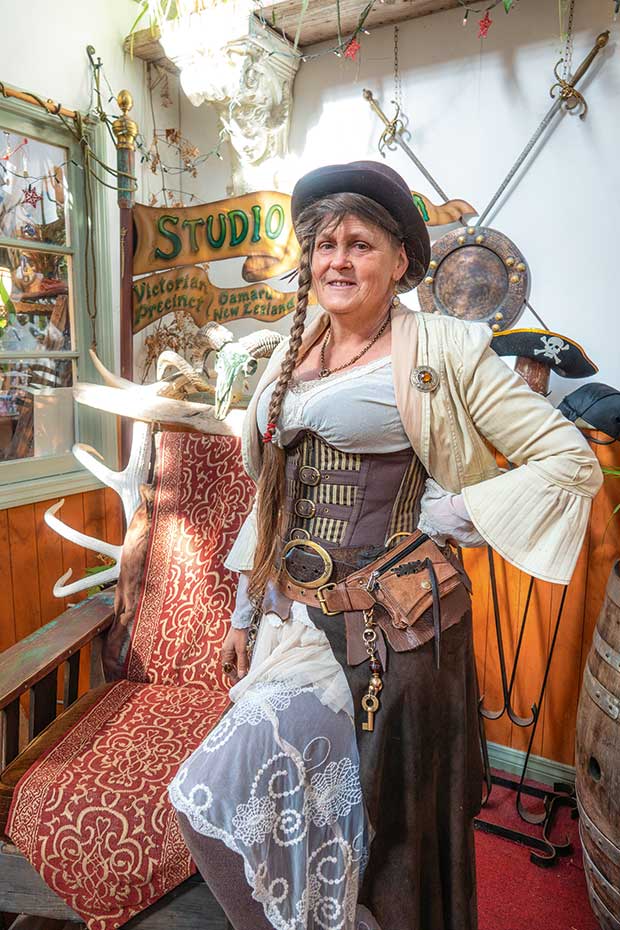 “I didn’t have a house or a job, but I knew I was coming back to Ōamaru.” She started by trading her handmade wares from a truck but has since moved into Studio Realm, a store/studio dedicated to all things steampunk. Miss Purple makes steampunk-inspired jewellery and leather goods, and also stocks “whimsical art” from a range of local and national like-minded artists.

To feel the part, one must look the part, so a stop at The Wardrobe is non-negotiable. Every imaginable piece of clothing, footwear (even underwear) needed to capture the essence of Victorian dressing is here. 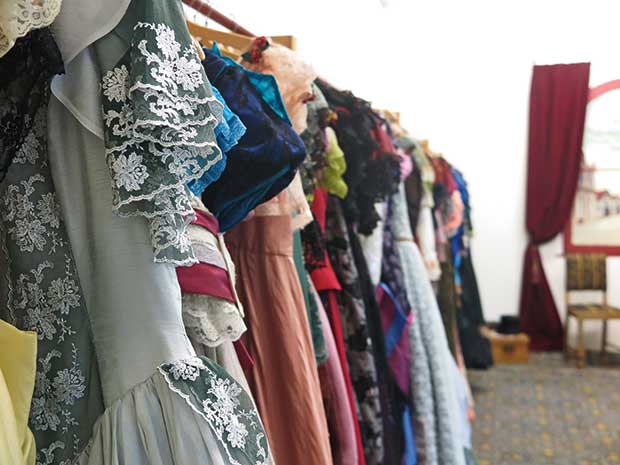 Items are available for hire so visitors can pop in, hire a costume, and snap a Victorian-style selfie. Open Thursday 10am to 4pm or by appointment.

Never fear, slow crafts are making a comeback, according to Catherine-Joye Truman. “It’s become a real movement — younger people are learning to knit or crochet through YouTube.” It’s a blessing for sewing collectives such as The Ōamaru Textile Emporium (TOTE), which sells the creations of the region’s talented craftspeople. Wool has a long history in Ōamaru, and the legacy of early sheep farmers lives on through those who appreciate beautifully spun and dyed yarns.

Jewellery-maker Debra Blackgrove finds herself humming as she makes her steampunk-inspired pieces. “I discovered making jewellery when I was recuperating from an illness, and it just made me happy.” Her shop can also dress an enthusiast from head to toe, with traditional undergarments, luxurious coats and mechanically inspired accessories. “Steampunk is a Victorian-themed future – a future that never was,” she says. A 1920s recipe and an active imagination is the secret to perfect ice cream, or at least that’s the case at Deja Moo.

More stories you might like:
The Old Ghost Road takes hikers through historic terrain on a 85-km, multi-day tramp Owner and ice-cream magician Shaun Osborne worked at most of New Zealand’s big-name ice-cream companies but has now opened his “imaginarium” in the heart of the precinct. Flavours change often but have included Baileys, lemon meringue pie and sugar-free ice blocks for every man… and his dog. Yes, ice blocks for dogs. 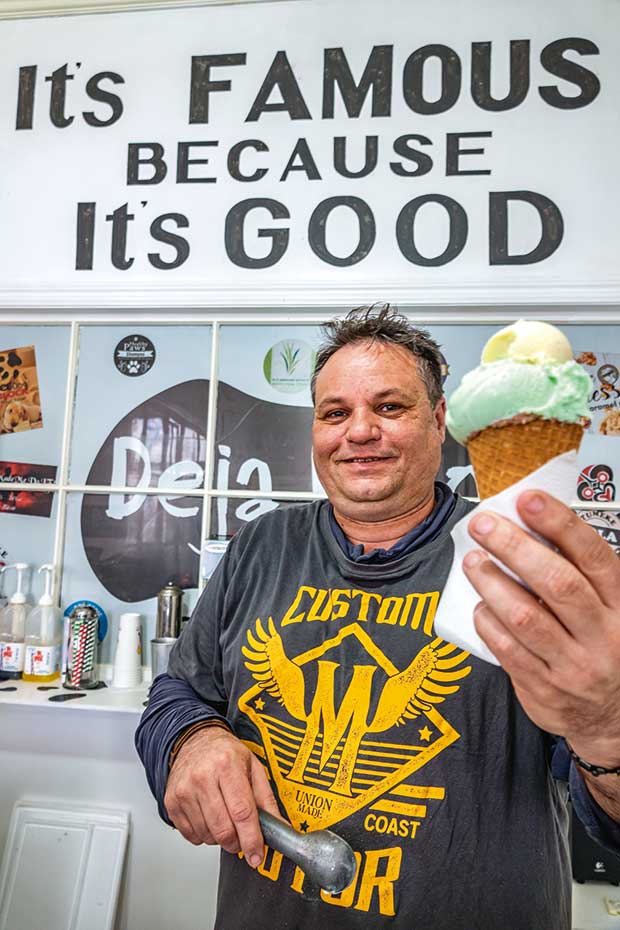 What is it exactly that attracts makers, creators and thinkers to Ōamaru? It’s a town that buzzes with creative energy, and Crafted is one of the best places to stand back and appreciate the local talent. Crafted is home to potters and painters, photographers and sculptors, leather artisans and weavers — and a range of traditional English-style trug baskets. 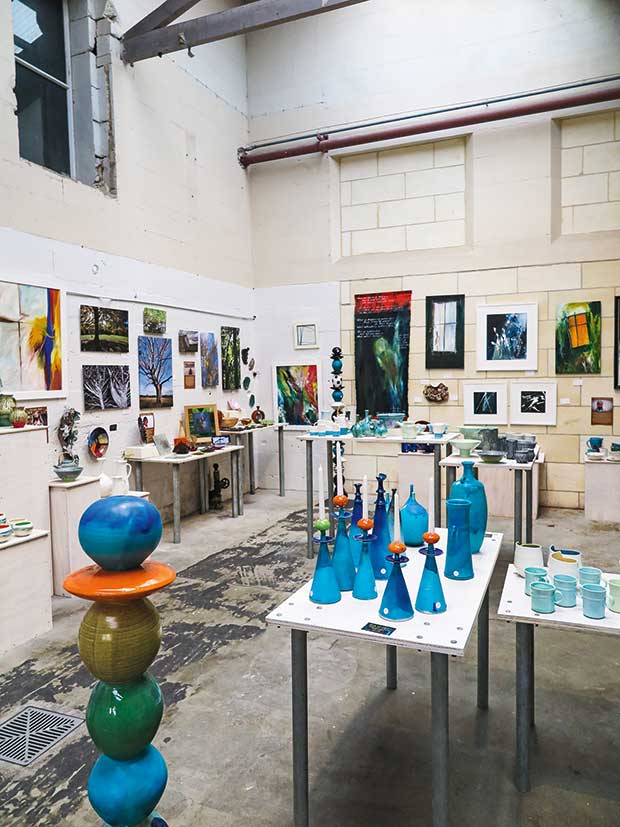 Crafted is a collective of 15 artists, so the friendly face at the counter is most likely also one of the talented creators of the works on display.

There’s something magic about Donna Demente’s Grainstore Gallery. Perhaps it’s the hundreds of pairs of eyes, always watching? Maybe the eclectic combination of astrological, Renaissance and Victorian influences has something to do with it or the many masks and figures that decorate all surfaces? Donna is a well-known Ōamaruvian and former winner of the World of Wearable Art Award, and her gallery is part of the fabric of the Victorian Precinct’s soul. The gallery comes to life at night when it plays host to a traveling cast of interesting, exciting and sometimes unexpected musicians and singers.

Is there any better winter afternoon combination than a toasty potbelly stove, knowledgeable company and a seemingly never-ending supply of second-hand books? Kahren Thompson is a matchmaker of sorts – her shelves are full of once-loved books waiting for their second act. Librarian Kahren and her mother Jenny opened Slightly Foxed in 1995. She moved from the 23rd floor of an Auckland skyscraper to Ōamaru’s Victorian precinct after falling in love with the whitestone buildings at an exhibition of Ōamaru architecture. Now her little booklover’s paradise, with titles on a wide range of topics – from New Zealand literature to local Māori and natural history – is housed in the town’s heart. 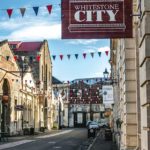 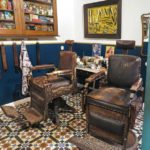 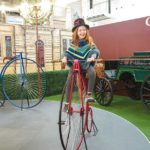 More stories you might like:
Video: Get a bird’s eye view of Queensland’s Lake Dunn Sculpture Trail

The highest mountains, deepest oceans and most frigid temperatures wait within the doors of Adventure Books. The entire world is within reach without having to leave the comfort of the Victorian Precinct. 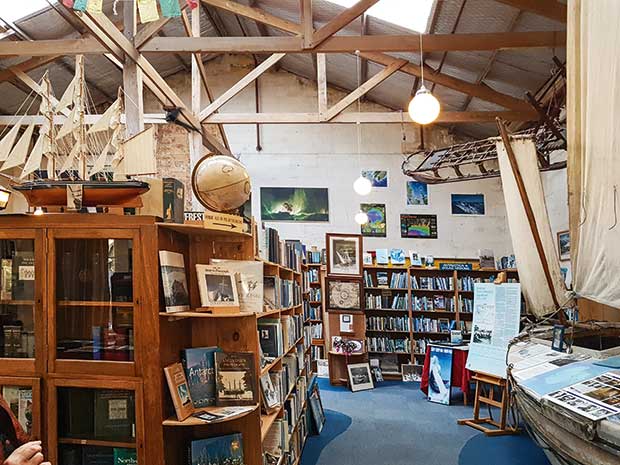 Adventure Books trades in the rare, the thrilling and the dream-evoking; its books tell tales of mountaineers, adventurers and explorers, with a particular focus on Antarctica and icy worlds. There is also a vast online store, so dreamers from overseas and beyond can rummage through the depths.

The Harbour Street Jazz & Blues Festival, 20 to 22 March. The streets of Ōamaru are filled with song, sound and soul as the annual jazz festival comes to town. Festival-goers can take part in workshops, listen to talks or sit back and enjoy the various performances. harbourstreetjazz.com

Steampunk Festival NZ, 28 May to 1 June. The longest-running steampunk festival in the southern hemisphere is a spectacle replete with markets, quirky events (2019 had tea-dueling and monster-pot racing) and a majestic gala ball. Even those too shy to don the garb will find themselves swept up in the delightful dotty-ness of it all. steampunknz.co.nz

Victorian Heritage Celebrations, November. If seeing a penny-farthing race just so happens to be on the bucket list, then Ōamaru is the place to be. Every November, the town celebrates its Victorian heritage with a long list of activities and events that give a little glimpse into its lively past. vhc.co.nz

PLACES TO VISIT NEAR ŌAMARU 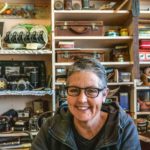 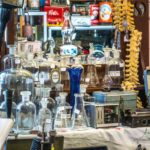 Hampden Stores
There are ghosts in the back rooms of Hampden Stores. They don’t bother Michelle Clarkson. The occasional bump, bang or creak is just a reminder that everything in her store of tools, collectables and antiques has a story. “The store’s full of happy memories, with a few ghosts who’ve kept their hands tight on their tools.” The building has a rich history; it first opened in 1867 before burning down in 1905 and being rebuilt. It’s always been a store of some kind, and when Michelle was looking for a new challenge almost six years ago, something felt right. “I’d always worked in retail, and this store brings everything together.” Michelle’s vintage tool collection may be the largest in the country. She has entire rooms dedicated to garden and hand-tools; however, there are also toys, books, porcelain and art.
1 Liverpool Street, Hampden. (03) 439 4802, hampdenstores.co.nz