How to buy a wheelbarrow that will last 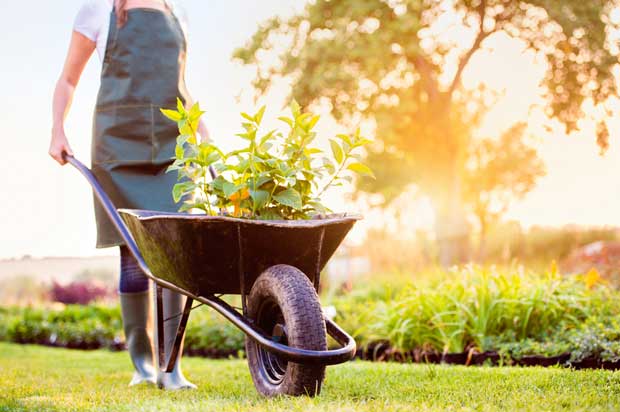 It used to be that when you wanted to buy a wheelbarrow, there was only one choice. Now there’s wheels for every occasion.

The wheelbarrow has now evolved to become a range of very useful additions to your garden shed, but there are barrows, and then there are barrows.
Some things never change. A good barrow has to be strong, preferably with a galvanized steel frame.

In the old days the barrow tray was also made of steel but now they’re made of plastic, making the whole entity lighter and more maneuverable.
The change from steel to plastic brought with it a few changes in design. The old steel trays were usually welded to the frame, leaving a smooth bottom that could be easily cleaned out. The down side is they tend to be very heavy, making it hard for weaker people to move around, or to recover the balance of the barrow if it began to tip.

Barrows with plastic trays have the advantage of being light and are able to be moulded to include a pouring lip at the front. However, the slight disadvantage is a plastic tray must be attached by bolts to the frame, leaving you unable to completely clean out material from the bottom of it because the bolt heads are not flush. It may also be a likely rust-point in years to come, allowing the tray to loosen.
If you intend to carry heavy loads in your wheelbarrow, like concrete, rocks etc, pay the extra money and get a sturdier barrow with a reinforced undercarriage. All wheelbarrows are rated for their load capacity, so check out the weight a barrow is meant to take before buying.

More stories you might like:
Why willows are a flexible tree choice: growing willows for animal fodder, weaving with willows, how to coppice willow

If you intend to do a lot of tipping with your barrow, choose one with a tipping bar across the front wheel, making it easier to stand up on its end, and a pouring lip, especially if you know you will be directing the flow of material ie concrete, small stones, crushed shell etc.

The other stand-out feature of the traditional barrow is the pneumatic tyre that allows for easy turning, even under a heavy load. There are tyres available that won’t puncture but the downside is they tend to be heavier and are very hard to push on soft surfaces.

WHY DO WHEELBARROWS WORK SO WELL?
The wheel barrow is a second-class lever, with the wheel as the fulcrum. The input force is at the handles and the output force is the load in between.
What makes the wheelbarrow such a great piece of engineering design is it allows a person to easily move a heavy load, far beyond what they could move just using their hands and arms.

For those who don’t need a heavy duty wheelbarrow, or who find it hard to lift loads, there are now a variety of two-wheel yard carts.
These tend to be cheaper and lighter, not for holding heavy loads like a wheelbarrow but useful for moving equipment and garden rubbish around your property. Most still allow you to tip them over so it’s easy to unload rubbish, without need the strength to keep it balanced.
Plastic carts are built to carry bulky loads but are still fairly lightweight, and have a much lighter weight-bearing capacity than a wheelbarrow, so check it out before you load it up with heavy materials. You could end up bending the cart or even breaking it.
Another option is a four wheel utility-type cart pr wagon. This is more like a kid’s trolley on a larger scale, making it easier to carry new plants, rubbish and other garden material around your lawn. Some even come with sides that can be folded down if you need to carry anything over-sized.
Again, these tend to be lighter and easy to pull and should be able to carry a heavier load than a cart but again, check the weight-bearing capacity before you buy.
The other drawback is you can’t tip a cart like this, so it will have to be unloaded.
Check before you buy that the cart is not too wide that it won’t fit through your gates or fall off garden paths. Wider tyres will give more stability.
If you want to do some serious earth moving, especially over rough terrain in a confined space, you can now consider the motorized wheelbarrow. These run on a track system like army tanks and can carry large weights easily.

More stories you might like:
How this Upper Moutere couple turned their boggy paddock into a native wetland

FOR THOSE WITH A BAD BACK

If you have a bad back or aren’t particularly strong, look for the wheel placement on the cart or wagon you are contemplating buying. If the wheels are located directly under the load, little or no lifting is required. Compare that with the traditional wheel barrow, where the wheel is at the front meaning much of the weight is borne by whoever is pushing it.

The wheel or wheels on a barrow, cart or wagon are also important. A good tread is important, especially if you need to use it on a slope.
Size also matters – some retailers now offer the option of carts or wagons with large wheels, meaning it can easily roll across soft lawn or garden beds. Others will allow you to carry heavier loads.
EASY WHEELING
• Always test drive a wheelbarrow. Roll them along the aisle, check how they turn while empty and under a load – take a bag of compost for a walk up and down and check out how comfortable you feel using it. A good wheelbarrow can cost over $200, so you should check carefully.
• Keep your wheelbarrow under cover when not in use. Even non-rusting plastic wheelbarrows have steel parts that will go rusty. Make sure you grease the joints on the wheel every so often to avoid it seizing up.
• Clean out your barrow after use and let it dry out. Again, this prevents rust caused both by water and the corrosive nature of plant materials like lawn clippings.
• Load 2/3 of the weight toward the front of the wheelbarrow to help balance it by keeping weight off the handles.
• Take partial loads when moving heavier materials.
• Maintain recommended tire pressure.
• Finally, if your old wheelbarrow has finally given up the ghost, use it as a planter box!