What was once a silly dream has been whipped into a business churning out refreshing blues.

When Justin Topzand and Buffy McNicholas bought their first lifestyle block in the Far North back in 2003, they knew they wanted to grow something. They just didn’t know what.

They dabbled with Samoan misiluki bananas before trying blueberries.

“We went through a few years of them dying,” Justin says. “We didn’t know anything about horticulture when we started, but we realised it’s a science and an art.” 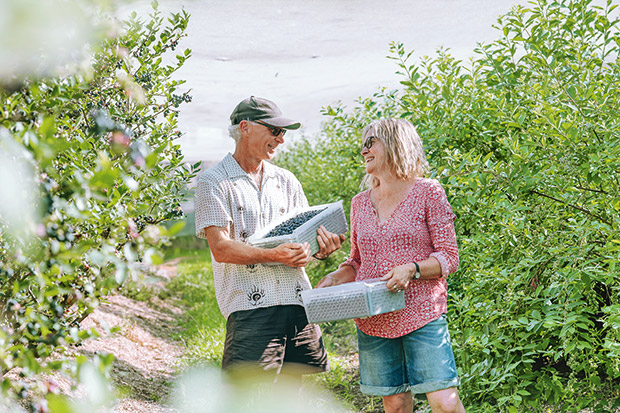 The couple had previously been living in Wellington while Justin worked as a camera operator on the Lord of the Rings movies. They’d often escape the stress of work and take their two young sons to a pick-your-own blueberry farm in the Akatarawa Valley, at the northern end of the Hutt Valley.

“We used to dream – we had the idea of growing blueberries, bananas, or feijoas,” says Buffy. “We wanted to do something different. We scouted the whole country and looked at Golden Bay and here (in Kerikeri) for a block of land. “It was a bit of a silly dream that became a reality.”

Ten minutes’ drive north-west of Kerikeri, they found what they were after: a well-proportioned property with sun, shelter, soil, and water.
Initially, Buffy kept her day job as a physical therapist while Justin looked after their young sons Reuben and Jack.

Within five years, they’d ripped out the bananas, and the blueberry orchard had taken root. At the time, blueberries were starting to become popular as the new ‘superfood’ for their high antioxidant levels. 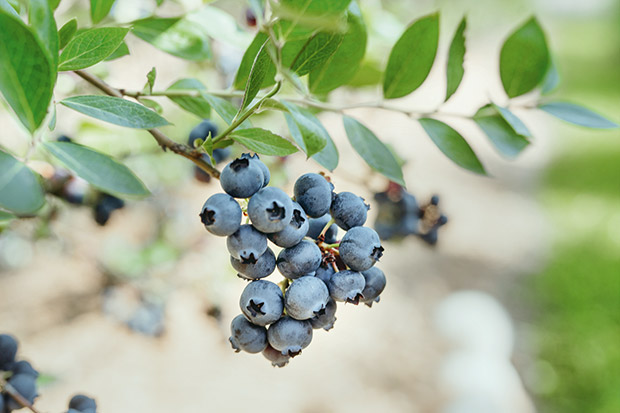 It was a steep learning curve. The couple joined Blueberries New Zealand, which represents grower members nationwide, and found its advice to be a huge help. The association also promotes the health benefits of the blue fruit, which is rich in antioxidants, vitamins, minerals, and fibre.

“We noticed they were becoming a health trend and saw there was a possibility to get into a crop that was just starting in New Zealand, as opposed to one that was well established. If you want to grow citrus or avocados, you’d need more land (than we have), but blueberries are a more intensive, smaller crop.” 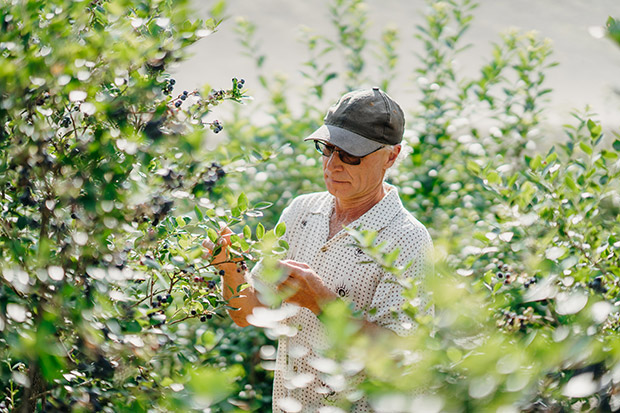 Blue River Orchard is now a full-time business for the couple, who describe themselves as “small, but serious growers.” A third of their south-facing, sloping 6ha block is dedicated to around 2000 blueberry plants. The rest is used for grazing livestock. 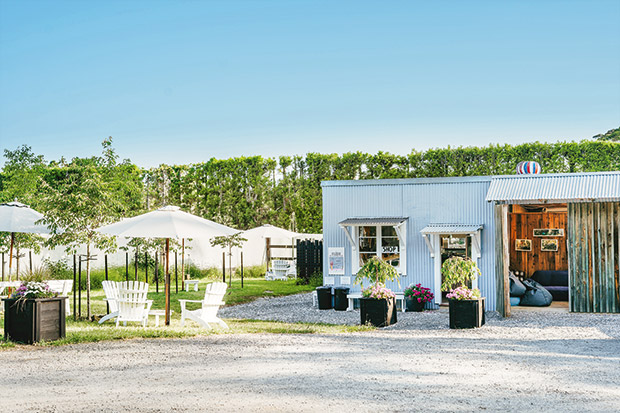 Their annual harvest starts around Labour weekend and lasts until early April. A quaint little shop on their block sells fresh and frozen berries, their other products, and good coffee. To find it, you follow the large, ice cream-shaped signs that pop up along the roadsides in November, which lead you down their rambling driveway just off the main highway.

The couple also takes a retro caravan to local markets, festivals, and events, including Waitangi Day and the Bay of Islands Show. While their biggest sellers are fresh blueberries and ice cream, Buffy loves customer requests and is keen to try different products. Her 100% natural jam – packed with berries, lemon, and cinnamon – has proved a hit. 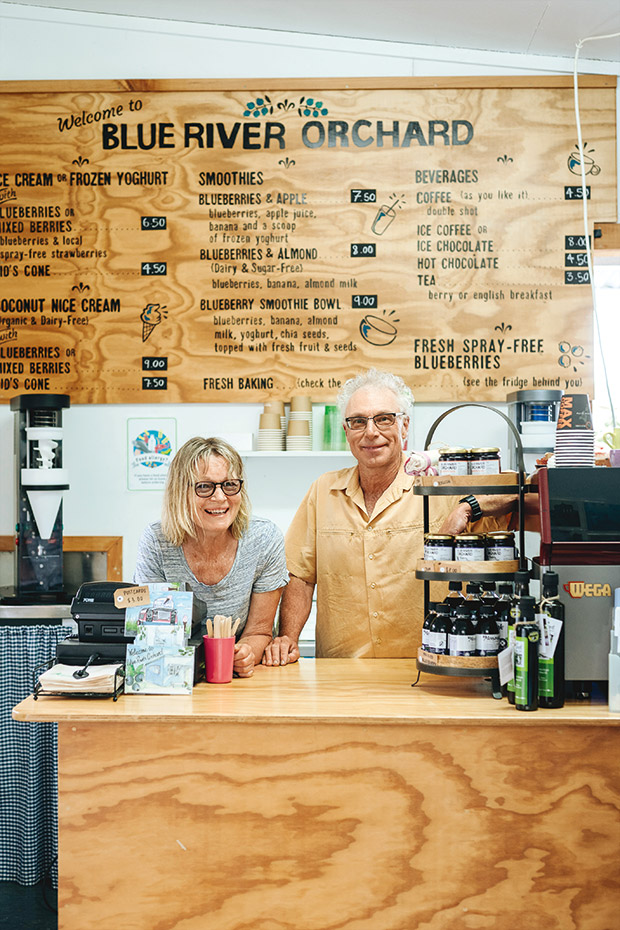 Another good seller is blueberry relish, made with balsamic vinegar, muscovado, rosemary, and orange zest. A lot of people buy a year’s worth of berries.

“People want (to freeze) berries for winter, and they want them locally grown.”

Their sons helped Justin and Buffy in the early days. Now the boys have grown up, several high school and university students are employed to help run the orchard, shop, and caravan over the summer. The couple also opens the orchard at the end of each season to let customers pick their own. 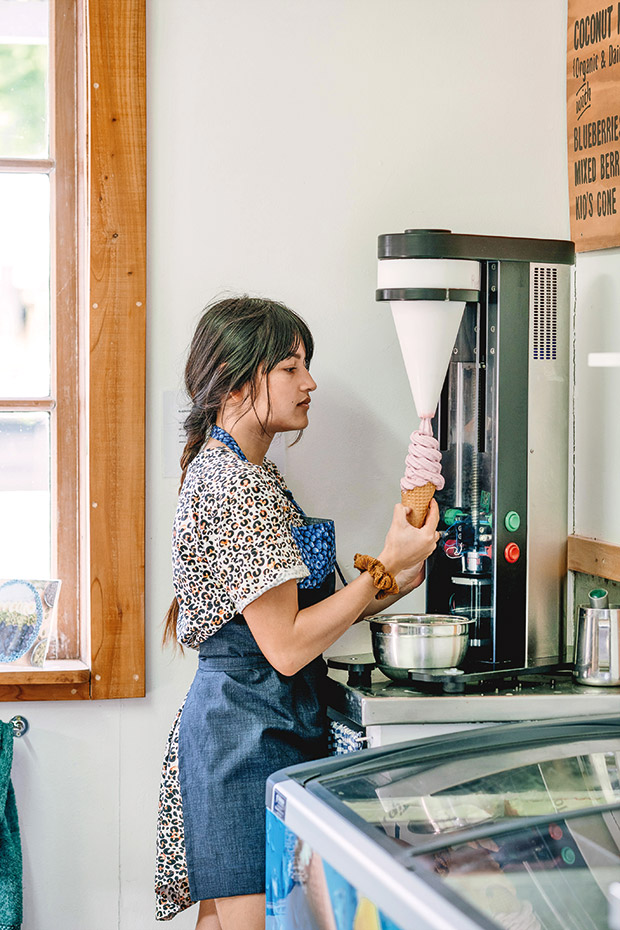 What started as a hobby is now a profitable business. “Even though we’re tied to the orchard, we love it,” Buffy says. “And we just love seeing our customers happy.

“There’s something about growing something yourself and making a living from it. A lot of people didn’t think we’d pull it off on such a small property, but we did it, and we’re quite proud of that. 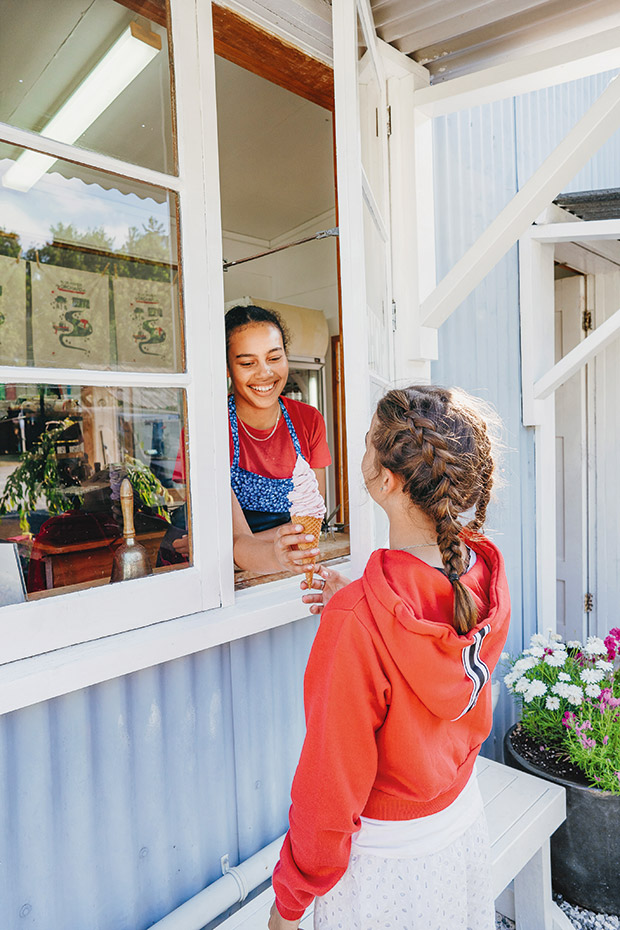 “Most people go big on orchards and say you’ve got to be big to succeed, but we’ve proved otherwise.”

It’s taken a lot of hard work and horticultural know-how to turn Blue River Orchard into a thriving business.

Justin and Buffy initially planted three varieties of southern highbush, one northern highbush variety, and five rabbiteye (the main variety available in New Zealand). The different bushes ripen one after the other, each producing fruit for several weeks until the next one is ready. 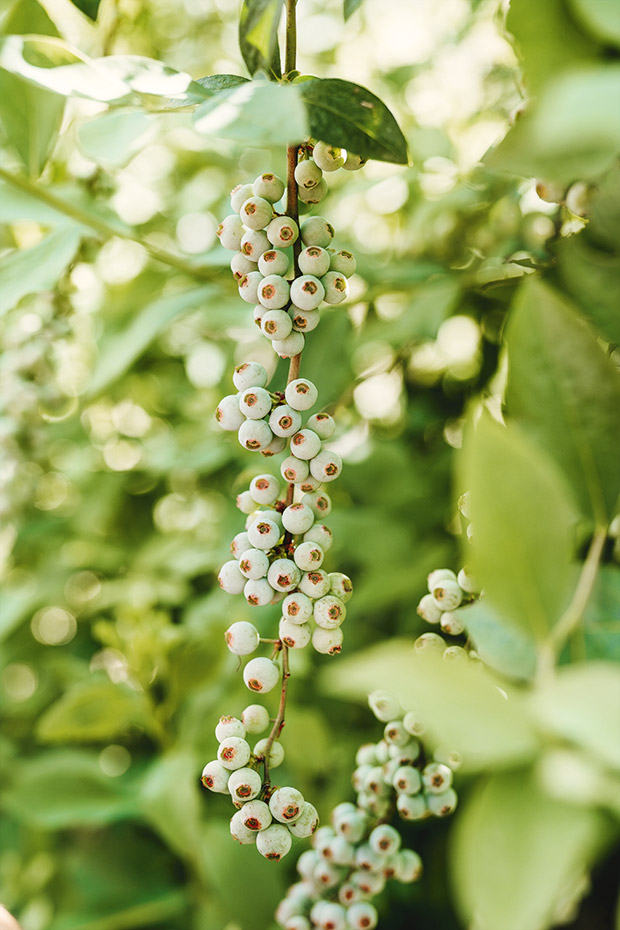 In the last decade, they’ve found the rabbiteye blueberries – Vaccinium ashei – are most suitable for their block’s subtropical climate and soil. They’re “rampant growers,” says Buffy, and the couple is planting more.

“Blueberry bushes are very particular; they don’t like wet or dry feet and are susceptible to phytophthora, a pathogen from the same family that’s killing kauri.”

The couple buys cuttings from Tharfield Nursery in Katikati and Annton Nursery near Cambridge. These are transplanted into their on-site nursery – a large sawdust bed – where they grow for a year before they’re planted out in the orchard. 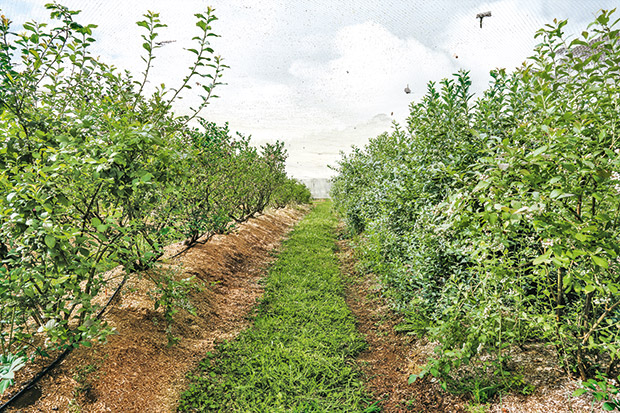 To get the most from the plants, Buffy initially removes the flowers to allow the roots and foliage to develop. For the next two years, half the flowers are taken off.

More stories you might like:
Inside the Dunedin’s Robert Lord Writers Cottage, the small home where writers get big ideas

It’s not until the fourth year that they harvest the first crop. Buffy says there are two challenges to growing blueberries in their area. One is the birds, which are kept at bay with netting.

The other is the soil. Blueberries thrive in free-draining, peaty forests, and acidic soil conditions (pH 4.5-5.5). The couple’s orchard sits on volcanic soil where the pH levels are naturally high. They artificially adjust the pH levels down using sawdust as mulch. They also mound up the soil to encourage drainage and avoid disease. 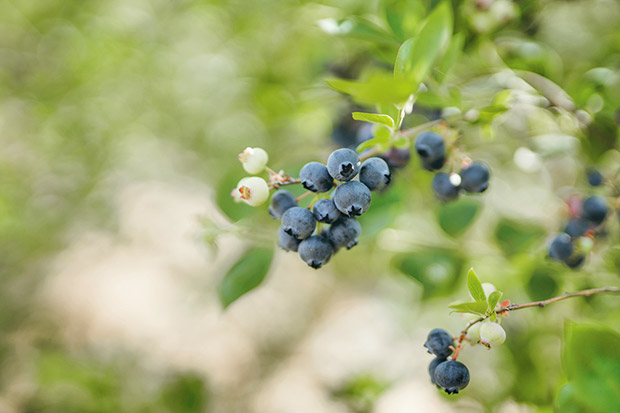 “In the early days, we used sulphur and lots of sawdust from untreated pine to make conditions more suitable for the blueberries,” says Buffy. “We had to feed them artificially with chemical fertiliser.”

These days they ‘fertigate’ (fertiliser is fed through irrigation) every two weeks during the main growing period, from spring until the end of summer. They also use liquid seaweed two to three times per season. 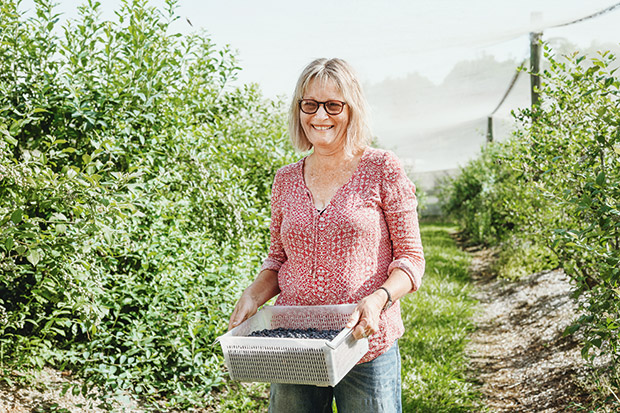 Every summer, they send leaf samples to Hill Laboratories and have detailed conversations with horticultural consultant Lynda Hawes to help them figure out what they should be feeding the plants next season.

Soil tests in winter ascertain what nutrients and minerals are missing. Although not certified organic – their soil is too high in minerals to allow them to grow organically – Buffy and Justin try to avoid spraying their bushes with anything other than copper for blueberry rust and seaweed for plant health.

Weeding and pest control is done by hand, with the couple squashing beetles and aphids as they pick. Comfrey and salvia are planted through the orchard to keep weeds down and attract bees. A local beekeeper has 20 hives on the property, which are crucial for pollination. 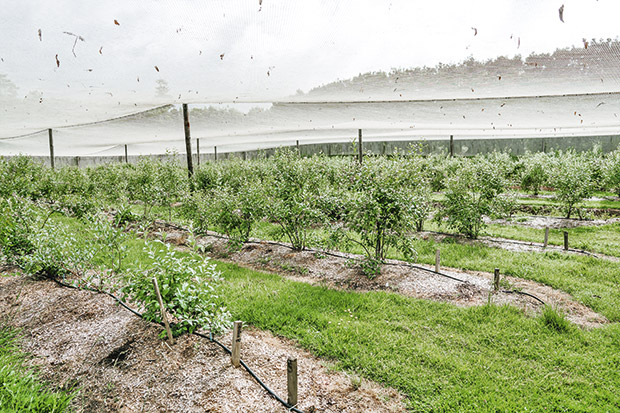 The entire growing area is covered with netting to prevent birds from stealing the crop.

The high-nutrient comfrey is also a valuable food crop for their cattle and chickens.

At the end of picking, Buffy starts pruning. It’s always a challenge in the ‘winterless’ Far North as there’s only a small window of opportunity. Buffy tip-prunes the rabbiteye varieties, which tend to grow wildly. The highbush varieties get a lighter prune because they don’t come back so readily.

In winter, she takes another 20-30% off the base of the rabbiteyes. She then applies an antifungal copper spray to prevent disease in the cuts and blueberry rust.

“We somehow manage to get it all done within days of the flowers emerging in late winter, early spring.”

THE 3 TYPES OF BLUEBERRIES

The perennial, shallow-rooting blueberry shrub is native to North America and Canada. It’s part of the Ericaceae family, which includes azaleas and rhododendrons. There are three different types grown in NZ, and dozens of varieties of each. 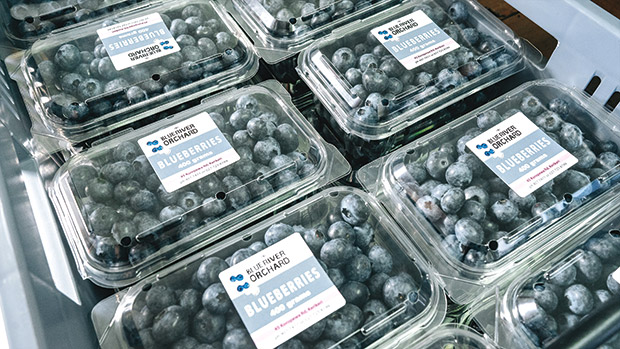 • plant near rhododendrons and camellias – they like the same soil conditions, and you can feed them a similar acid fertiliser mix;
• mound up the soil to aerate it;
• don’t plant too deep;
• mulch with sawdust or pine needles;
• cover bushes with netting to keep the birds out.

Justin is an innovator. He’s made a sawdust-spreading machine out of an old conveyor belt, and a powered dumper for prunings to make their working life easier. 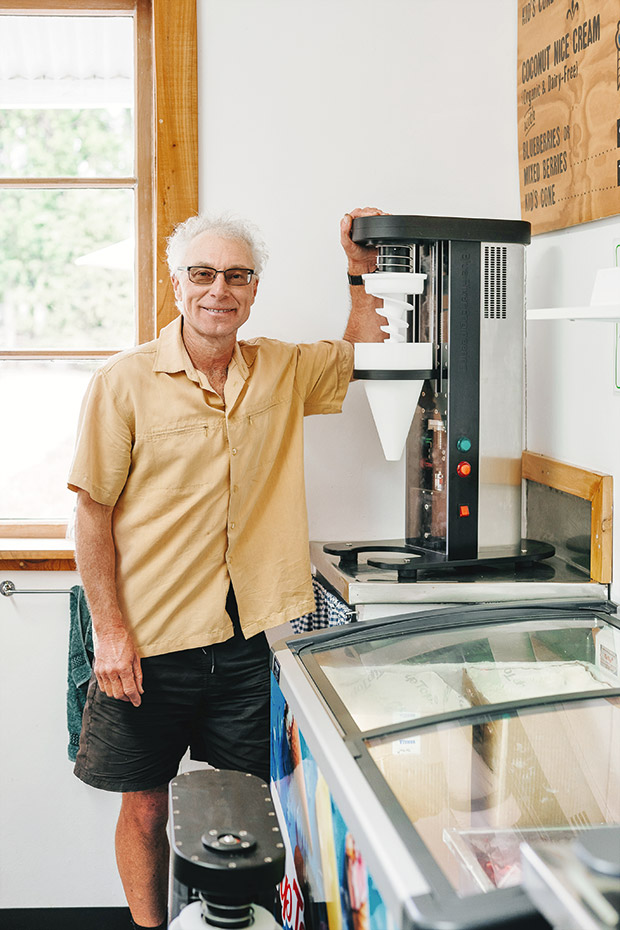 “We’re now figuring out ways to do things smarter, using more machines rather than relying on the strength of our own backs.” But his biggest success has been the bespoke machine he calls the Whip It, which creates their berry fruit ice cream.

“We started with a 1980s ice cream blending machine which we constantly struggled with – it was slow, messy, and unreliable.”

What they wanted was a machine tough enough to mix masses of frozen berries with vanilla or coconut ice cream, or plain yoghurt.
Justin teamed up with friend Chris, a mechatronic engineer. 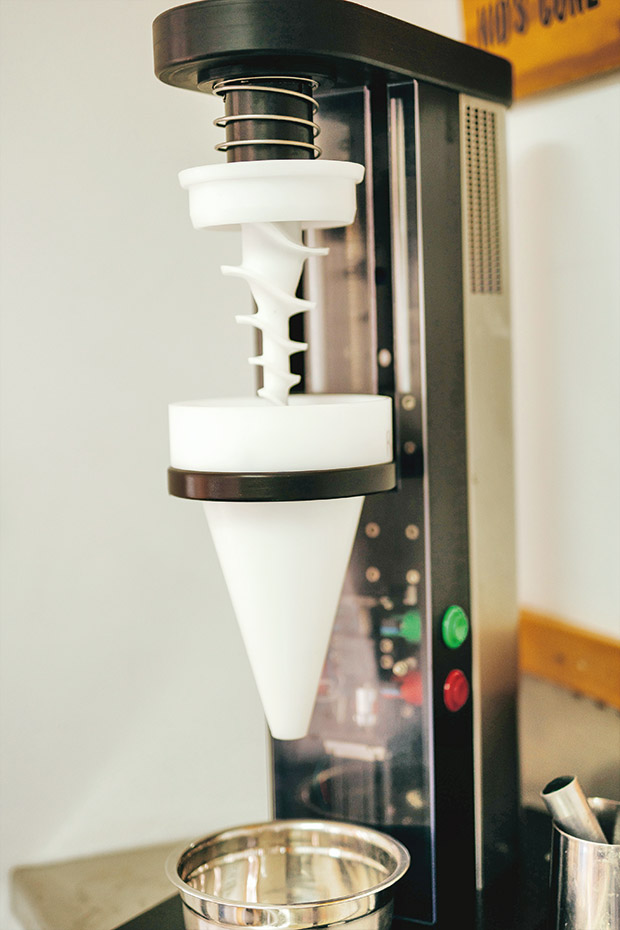 “We thought of alternative ways of doing it and came up with some rough drawings of what we wanted.

“We were able to develop something that could cope with far more variables: soft ice cream, hard berries or soft berries, hard frozen yoghurt, or hard coconut ice cream and hard berries.” 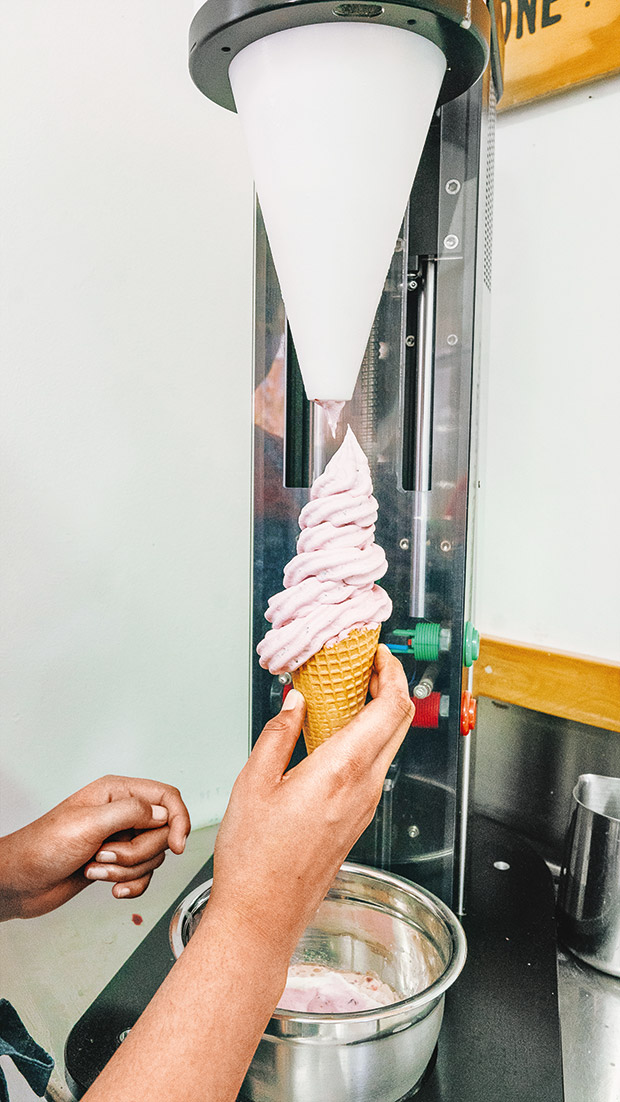 The Whip It mixes up one portion of ice cream at a time. You tip a measure of berries, then ice cream into a plastic funnel. When you hit a button, the funnel moves up to the mixing screw, which blends the two. The now pink-purple ice cream is pushed out of the bottom of the funnel into a waiting cone. The whole process takes just 16 seconds; about half of that is a gentle whir as it combines berries and ice cream.

“Our machine uses intelligence to mix ingredients faster and better,” says Justin. “Blending ice cream and frozen berries fast is quite an art, and technology can help. We call it performance art, and the customers want to see the creation.” 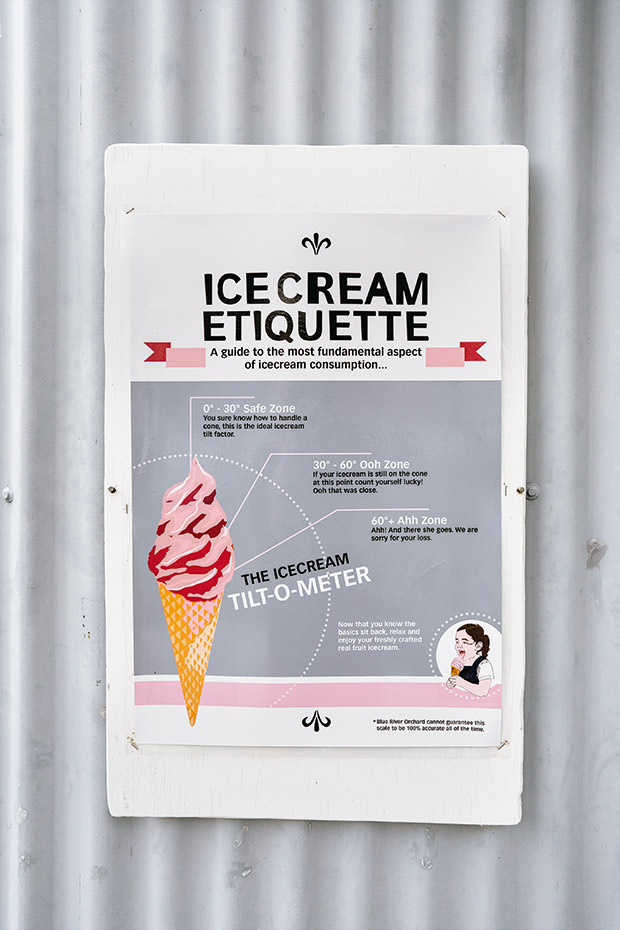 The machines are developed and tested in Northland and built in Auckland. During the off-season, Justin travels around the North Island, giving presentations to the berry industry and selling machines to other growers.