They say the only way to conquer a fear is to confront it, but Lisa Scott discovers singing “la la la” and completely ignoring it might be less psychologically damaging in the long run.

Even though the bit where the robot head eats the boat was patently ridiculous, I’ve feared sharks ever since, aged 9, I stayed up with the babysitter to watch Jaws.

A surfer friend recently told me there’s an average of one shark per kilometre of ocean. It didn’t help. By ‘sharks’ I mean great whites as opposed to nurse sharks and basking sharks, the couch potatoes of the ocean. It is completely sensible to be afraid of sharks, I think. One, you’re in their ocean. You wouldn’t just rock up to Road Knight headquarters, plonk down on the sofa and flip over to Tiny House Hunters on HGTV.

Two, they sometimes eat people. Yes, yes, by accident I know. I eat things by accident all the time, but it’s not the same as munching a handful of potpourri at a party because you thought it was bhaji mix. When a shark attacks a human in a case of mistaken identity, there are consequences. He doesn’t just spit your bits into his hand and hide it behind the sofa. Sharks don’t have hands.

Sharks live for up to 100 years and travel thousands of kilometres in that methuselah lifetime. That’s one of the many shark facts I learnt when I travelled to Bluff this week to meet great whites face-to-face with Shark Experience Ltd. 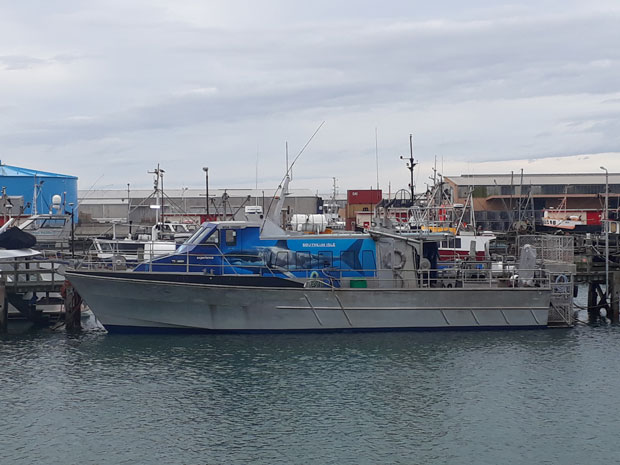 A 22-foot great white hung above the barmaid’s head at the Anchorage pub, the photo bleached pink. The shark had been caught off the coast of Australia in the 1980s. I didn’t sleep very well after that.

More stories you might like:
'The caravan chooses you': A Wānaka family on their camping-keen lifestyle and 1979 Oxford caravan

Next morning, as oyster boats dredged the orange horizon, we headed for Edwards Island (shark Ibiza) where up to 100 great whites congregate, eating fatty seal pups and tap-and-gap-ing. No-one has ever seen sharks have sex because sharks are intensely private, needing a personal space distance of 1.5 kilometres to not feel crowded. 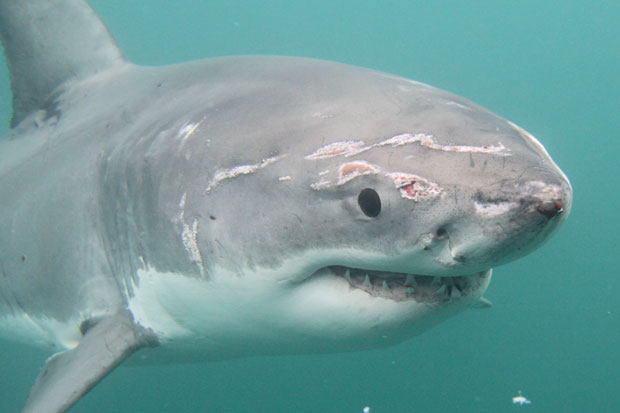 Male sharks gouge each other in a bid to be the best mate for a female. Photo: Mike Bhana

Here the ‘little boys’ (2-4 metres) fight over the right to mate with the ‘big girls’ (4-7 metres), their sides gouged and raked. A shark won’t bite another shark near the mouth because they have a bite force of two tonnes, something which is nice to know when you’re getting into the water among them in a cage that looks like it’s made from old security cage doors.

Sharks are shy. They build up confidence, get closer and closer, then use their teeth like we do our fingers, hence the misunderstandings. Terribly sorry old chap, whoops-a-doodle. They can also smell a drop of blood from miles away.

Captain Mike and Tiddles, the dive master, chummed (a practice of luring fish by throwing bait in the water) with ground-up tuna making an oil for the sharks to smell. Albatross landed flat feet first, folding up DeLorean wings, sooty shearwaters bobbed. 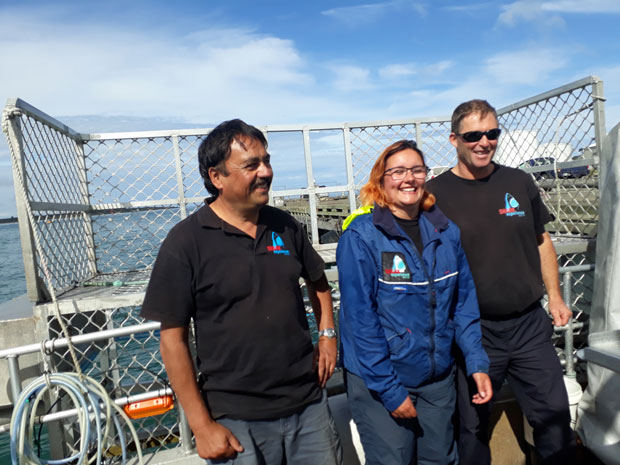 More stories you might like:
The Coastal Arts Trail: Discover hidden gems on this art-filled roadie through Taranaki, Whanganui and the Manawatū

“Are you breathing through your nose?!” asked Tiddles.

The cry of “shark!” went up again followed by “divers in the water!”, a sequence of words only ever heard in this context. I climbed down the ladder and hooked my feet under the rope to keep me from floating up. A massive bulk appeared out of nowhere. I suddenly urgently needed to go to the toilet, but I had one hand on the ladder and one on the rail below a sign that said, “Keep all body parts inside the cage”. 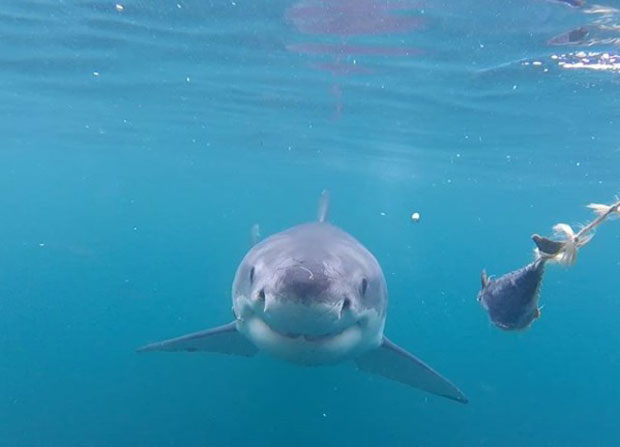 A shark approaches, attracted a tasty bait floating at right in this picture.

Sharks are pale underwater, graceful, effortless swimmers with an evolutionary design so perfect it remains unchanged after millions of years. Their crowded mouths (300 teeth in seven rows, all constantly renewing) give them a slightly gormless look. Barracuda and mackerel swim around safe in the knowledge they aren’t a big enough meal, compared to me. It is like peeking into someone’s living room, if that someone is capable of tearing off your arm at the elbow. 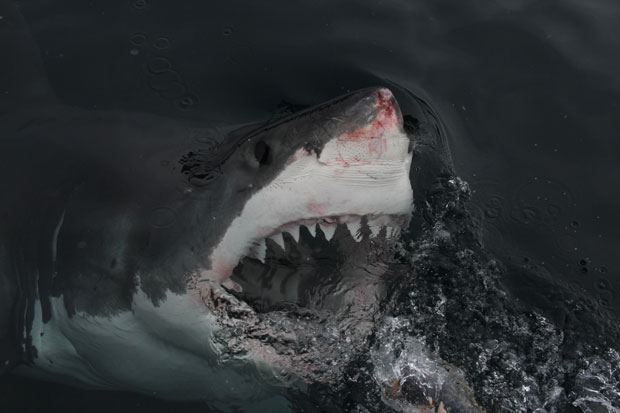 Scarred like a prize fighter, chunks taken out near his tail, he looks right at me, his black button eye flat and blank. If I want to, I could stretch my hand out through the gap in the cage to touch his gills, vulnerable-looking where the grey is speckled with white. I don’t, though.

I got out of the cage and climbed back into the boat and chatted about how awesome it was and put my jeans back on with shaking hands and waited to be taken back to the lovely safe land.

Lisa was scared witless thanks to Mike, Maddie, Nikki and Tiddles at Shark Experience Ltd, email mike@sharkexperience.co.nz, and Emma Hunter at Venture Southland