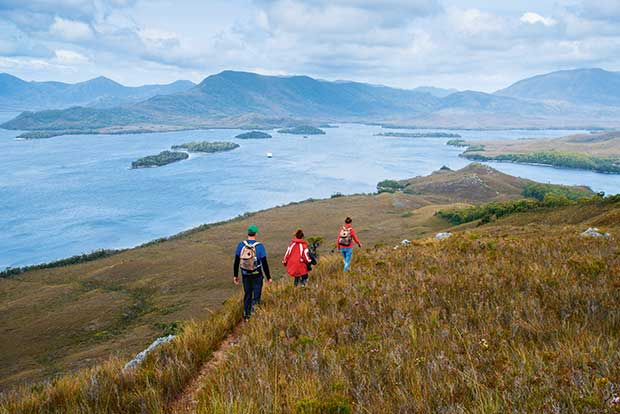 Walking through a world-heritage landscape is one of the real joys of the cruise. Guests on board the ship included all ages and stages – from a company CEO to an 84-year-old. All were adventurous, fit, curious and not shy of getting dirty.

Whales and wild waters, sugared beaches and dramatic landscapes, kangaroos and convict chronicles are all wrapped into the story of this isolated coastal stretch made accessible when explored by small ship.

Cruising the exposed south coast of Tasmania is a photographer’s dream – and today,  a captain’s too. “A gentle swell,” says master of the ship Nathan Clark. “Ideal conditions,” enthuses marine biologist Mike Sugden. We all agree.

The surface is oily, there’s no wind, and everyone is on deck as a large pod of dolphins plays in the bow wave.

We are cruising along in remote waters, passing the promontories of the South Cape. Ahead are the Maatsuyker Islands, bastions of rock in an ocean known for its fury and foul weather. The last image I take that day is of De Witt Island in the fading light, dwarfed by dramatic, dark clouds, their fringes glowing pale orange.

The next morning, I wake up surrounded by pristine wilderness. During the night our ship has entered sheltered Port Davey in the World Heritage-listed Southwest National Park. After breakfast we set off to shore. The dolerite cliffs of Tasman Island soar almost 300 metres out of the Tasman Sea. An automated lighthouse and a weather station are located on top of the island.

Low grey clouds swallow colours on this cool morning. Forbidding wasteland or glorious wilderness? For Alex Dudley, discovery ranger on board, there’s no question: “It’s magnificent and deservedly on the World Heritage list for wilderness value, its diversity of plants and landforms.”

Most of the passengers make their way up Mt Milner to enjoy tremendous views over the sheltered body of water and the mountains behind.

We are on an expedition-style voyage to explore some of Tasmania’s spectacular coastline: soaring sea cliffs, a multitude of islands, hidden bays and waterways, glorious beaches, safe anchorages, and untouched wilderness overlayed with testimonies of history.

The Coral Discoverer is a 63m sleek white dream of a vessel with room for a maximum of 72 passengers. It is intimate and very comfortable but without the flashy trimmings of the big cruise ships. The destination is the focus, not life on board. 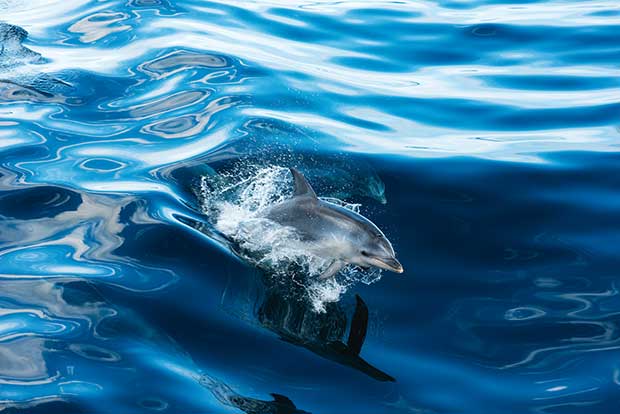 Dolphins came right alongside the boat and this shot was taken with a 70-200mm lens on a fast shutter speed to capture them. While you had to guess where the dolphins would surface, the water was so clear you could see them approaching.

The beginning of the cruise is benign: The Derwent River, the D’Entrecasteaux Channel, Recherche Bay, Cockle Creek and plenty of excursions along the way. Cockle Creek, the southern-most point on Tasmania that can be reached by car, sits on the edge of the Southwest Wilderness.

It is the last outpost before what feels like the end of the world. Where cars must stop we can continue – and head straight into the open ocean swell.

A day later, we are in Port Davey. After shore excursions we penetrate deeper into the wilderness with Master Nathan Clark guiding the ship slowly through the Bathurst Channel and The Narrows into Bathurst Harbour. Although he doesn’t find it particularly challenging to navigate these remote waters, deep concentration is written on his face. That afternoon, we are treated to a display of Southwest splendour.

The monotonous cloud cover breaks up and colour floods the landscape: blue sky, interspersed with photogenic clouds, distant hills awash with warm sunset hues, a period of coffee-book light for those with cameras.

It is a brief glimpse into what could be but seldom is. This area lies in the path of the Roaring Forties and low pressure after low pressure slams into the exposed landscape. There is almost always climatic drama here. 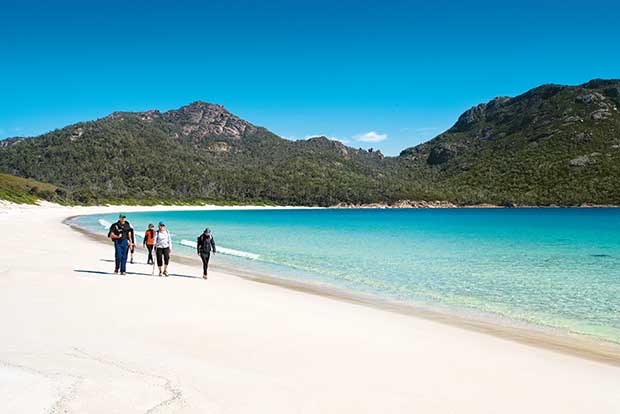 Rambling along the empty beach at Wineglass Bay in Freycinet National Park on a rare blue-sky day.

Unexpected movement wakes me the next morning; short buffs make the ship sway gently. Up on deck, fierce wind gusts are chopping up the ink surface of the water. The islands and surrounding mountains are just starting to get texture in this overcast morning.

After breakfast we follow a narrow river-like waterway to the outpost of Melaleuca and take an exhilarating walk to a spectacular lookout high above Bathurst Harbour.

As soon as we return, the master orders the anchor lifted and the return journey to Tasmania’s east coast lasts through the night. The wind has turned to a nor’westerly and shortly past the Breaksea Islands that guard the entrance to Port Davey, the Coral Discoverer steams into a heaving sea. 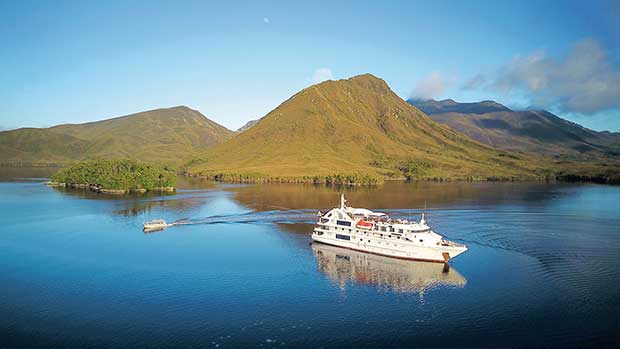 Coral Discoverer drops anchor in Port Davey on the wild south-west coast of Tasmania while its tender is on the way to Mt Milner, a prominent peak on the shores of the natural harbour.

I flee into my cabin. Looking out through the window I see a world in motion, with sharp rock pinnacles rearing out of grey water. I manage to nod off despite the bumpy ride and wake up in the calm waters of Adventure Bay on Bruny Island.

A huge breakfast beckons – last night’s missed dinner must be compensated for. Besides, the skills of the gifted ship’s chef, Travis Scarr, must be honoured. Then it is terra firma again: a delightful amble to the lofty top of Fluted Cape and a visit to the small Bligh Museum followed by an afternoon cruise in calm conditions across Storm Bay towards Tasman Island.

For Alex Dudley this is a highlight of the cruise. “Tasman Island at sunset is extraordinary,” he says. 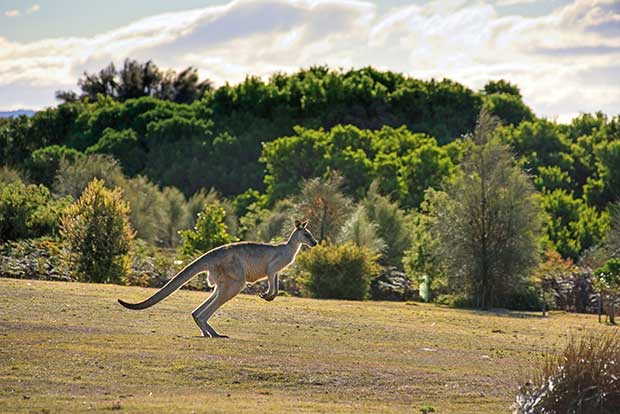 Lying in the grass is sometimes the best place to photograph kangaroos and wombats who come so close you can smell them.

The cliffs are lit up in warm orange then the colours slowly fade, turning it into a stark, black silhouette. As the Coral Discoverer passes the forbidding cliffs, a humpback whale with its playful calf joins the views; the excitement and distractions are so powerful dinner is postponed. Only the fading light drives us back inside.

Overnight our ship passes the eastern side of Maria Island and enters Great Oyster Bay. We are dropped off on the shores of Freycinet National Park for a walk through the granite peaks of The Hazards to glorious Wineglass Bay. 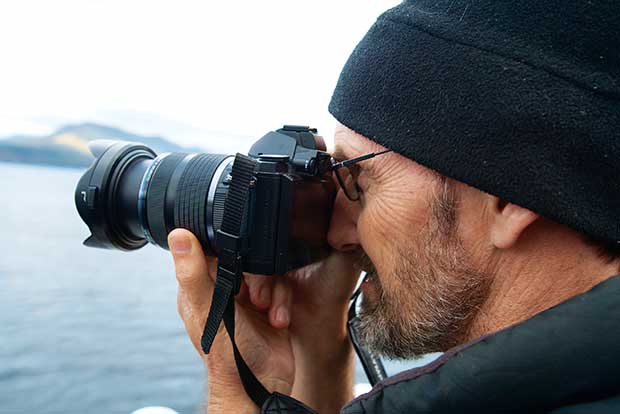 This offers a chance for naturalist and discovery ranger Alex Dudley to shoot up close.

We tramp across the blinding white sand as the water sparkles. There is a faint smell of sea weed and salt. We have the beach to ourselves. While we are walking, Nathan steams the ship around the tip of the Freycinet Peninsula and drops anchor off what is one of the most beautiful beaches in Australia.

From Wineglass Bay the ship heads south again. In his logbook, Nathan notes: “Approximately halfway to Maria Island is Ile des Phoques (Seal Island) where I was able to bring the ship to within half a boat length off the rocks for a fantastic view of a colony of seals basking on the rock ledges.” 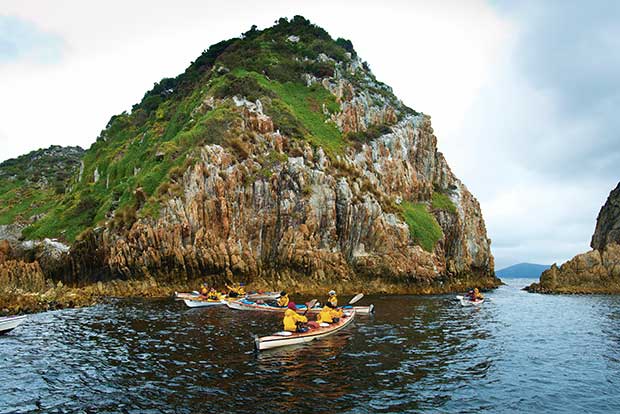 Although no sea kayaking is on offer on the cruise, other hardy souls were exploring the coves at Port Davey. Experience is a must as these are treacherous waters.

In the distance, mountainous Maria Island is already visible. It is a pleasant traverse, with blue skies and sunshine. But when we arrive, exposure to 20-knot winds make the planned anchorage in front of the historic settlement of Darlington impossible, so the anchor drops in Fossil Bay on the other side of the island.

As sheltered as the anchorage is, it throws a challenge at the crew. Instead of an easy landing at the jetty in Darlington, we go ashore at Fossil Bay. Wind and a steep climb from the rock shelf add a little adventure. Cliffs on Maria Island are one of the premier fossil sites in Australia.

The island lives up to its reputation: wildlife abounds with kangaroos, Cape Barren geese and tame wombats roaming the grassy areas.

Port Arthur is one of Australia’s premier historic sites, but before exploring, it is once again nature that grabs the spotlight. After breakfast, we head through the Mercury Passage towards the Forestier Peninsula before passing the magnificent sea stacks of the Tasman Peninsula, this time in full sunlight. Then the master steers the ship through the narrow passage between soaring Cape Pillar and Tasman Island – right into a heaving cauldron.

Fully exposed to the wind and the swell (W/SW 20-25 knots, swell 3-4m is noted in the captain’s log), I’m on the top deck, riding out the bumps, watching waves crash into the rocks, as large swells roll towards the ship. It is exhilarating. 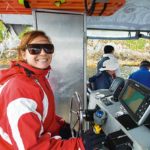 Ever-smiling Shana Kessell is on the wheel of the tender, bringing cruisers close to the rugged Breaksea Islands. 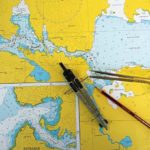 charts of the remote Port Davey and Bathurst Harbour within the Southwest National Park are essential tools for Captain Nathan Clark. 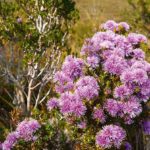 Flowering swamp honey-myrtle adds a splash of colour to the vast moorlands of Southwest National Park.

Then we reach the sheltered fjord that leads to a most beautiful and idyllic location with a most brutal past: Port Arthur. We arrive, as the convicts once did, by ship. Our welcome, however, is a different one: no shackles but a knowledgeable guide and a behind-the-scenes tour. And we can leave.

The next morning, we are back in Hobart. 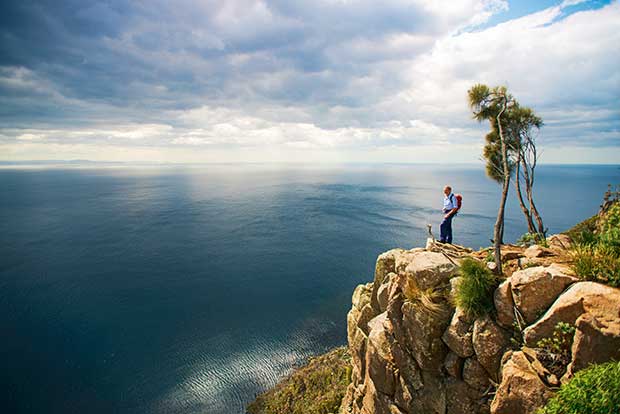 It’s quite a climb to reach the exposed lookout at Fluted Cape on Bruny Island and not for the faint-hearted.

What to expect: Coral Expeditions’ Tasmania cruise is a sophisticated adventure with a focus on the natural and historic attributes of the destination. The itinerary contains easy to moderate walks in wilderness areas so, to enjoy the full programme, a reasonable level of fitness and mobility is helpful.

The ship: Coral Discoverer is a small but very comfortable cruise ship that accommodates  a maximum of 72 passengers.

Getting there: Air New Zealand flies daily to Sydney. From there catch a connecting flight to Hobart with Qantas, Virgin or Jetstar.

When to go: Cruise season in Tasmania is between January and April. There are three departures in January, four departures in February and March, and one departure
in April.

What to bring: Tasmania’s climate, like New Zealand’s, is changeable and can range from hot to cool, wet and windy – all in the same day. Bring functional outdoor clothing including sturdy walking boots and comfortable, smart-casual clothing for your time on board.