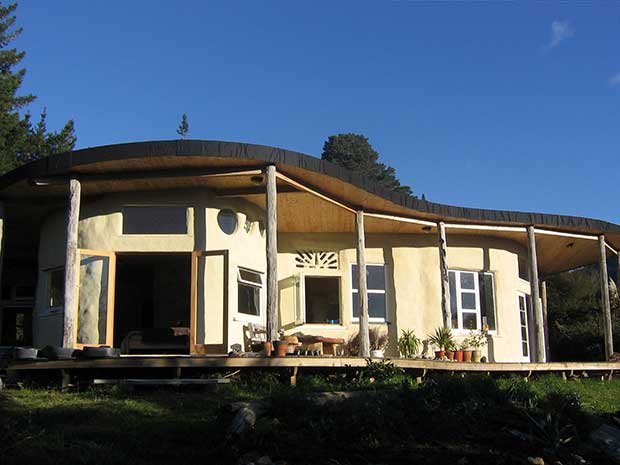 Rather than burning your seasoned firewood, with a tight budget and some time, you can use it to build a home.

It was a bathroom block at the local Tui Community farm that inspired Golden Bay naturopath Carolyn Simon to consider cordwood as a building method when she was planning her dream house back in 2002.

“I had my bit of land and I wanted to build a house, and I’d always had this idea of getting away from straight walls and right angles, and I really liked the idea of form following function using natural lines.”

“I’d looked at mud brick and straw bale and they seemed complicated and looked quite expensive. I was almost going back to using wood – which I love – and building a house with straight walls when a friend (and builder) Chip Williams introduced me to cordwood.”

Chip had used the cordwood method to help build the Tui Community bathroom a few years before. Once Carolyn saw it, she knew cordwood was what she had been looking for.

“The building was really just free-form walls that didn’t quite go up to the ceiling, but they’re plastered cordwood around structural poles.” 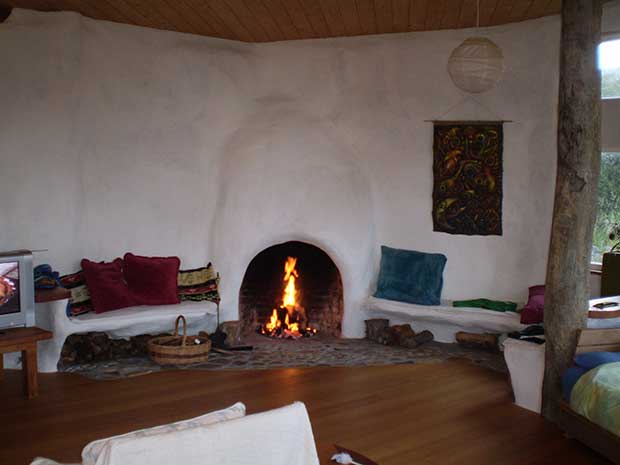 “Chip showed me that and I said ‘build me a house like that!’ I fell in love with the whole concept.”

She borrowed a book about Rob Roy’s cordwood building methods in the USA, and the more she read about it, the more she loved it.

“Part of the reason was finance, I didn’t have a lot. And I wanted to be able to build a house that wasn’t just a box, that I could express myself in I suppose, so this type of building really appealed to me.

“Also, it could be done reasonably inexpensively, the materials aren’t expensive, we used a lot of recycled things, and you could do it yourself. It’s a simple kind of building method, you don’t need building experience to construct the walls yourself. 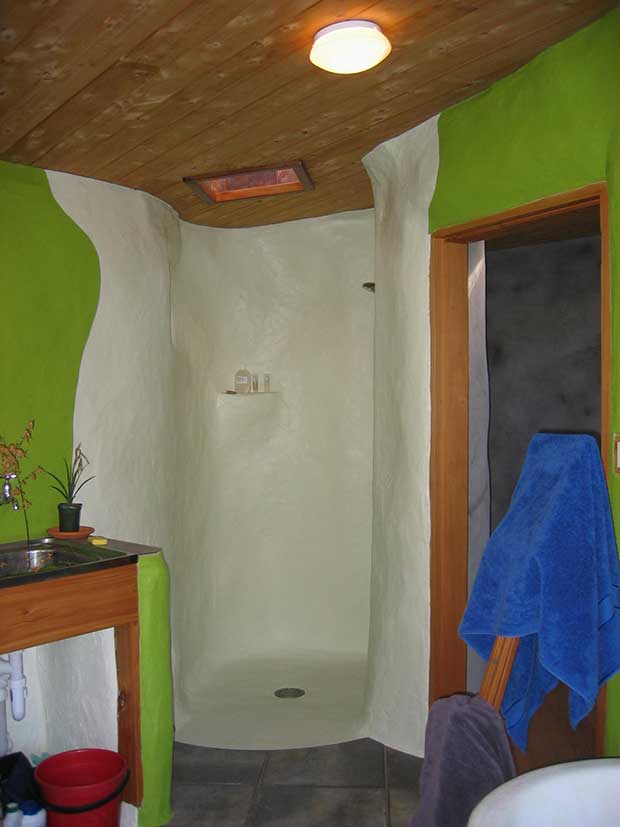 “And I had a builder who had dreamed of building a cordwood home and all he needed was a guinea pig – someone naïve and willing,” she jokes.

When it came to the design, Carolyn knew conceptually what she wanted in her dream house, so she designed it and drew up the floor plan herself, including profiles.

“I had a real vision for the kind of house I wanted. I designed it with a lot of input from Chip – he helped me with details, concepts and lots of encouragement to be creative – and when it got to the point where I needed structural stuff done, I sent my basic hand-drawn plan to an engineer who was familiar with cordwood buildings.

He produced three pages of professionally drawn plans and that was what I put into council, along with lots of my own supporting details and drawings. 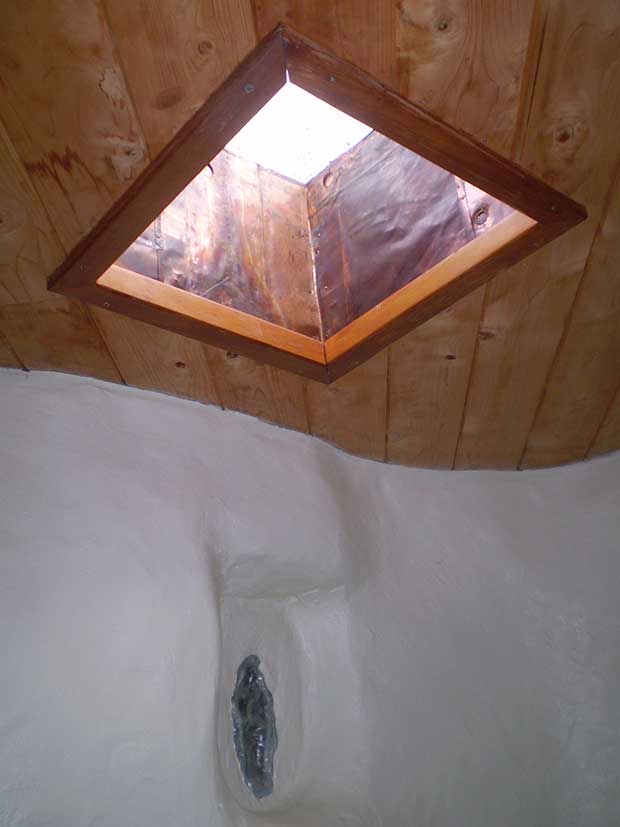 “The council said ‘go ahead’. They did scratch their heads a bit, and wanted the engineer to do the inspections rather than their building inspector.”

It was at about this time that ‘leaky homes’ were hitting the headlines and before building regulations began to be tightened up in the mid-2000s, but Carolyn says her home’s fundamental design doesn’t fit the profile for a leaky home design. One example is its over-hanging eaves: while her home’s floor area is 142m², the roof is 210 m². 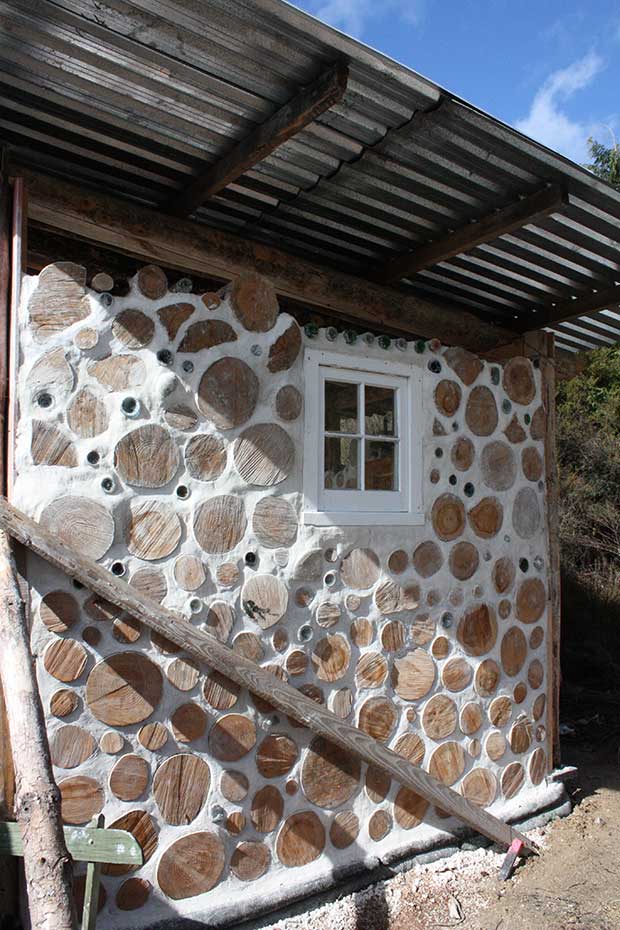 “The house has got huge eaves – which was certainly part of the concept – and the way Rob (Roy) builds, he sometimes leaves the wood open to the elements but mine is plastered over because we have such a wet climate, and also for aesthetic reasons. Golden Bay gets a lot of rainfall.”

Construction was a long-term process, with Chip and other workers doing the structural foundations, poles and beams, roof, ceiling and concrete slab. After that, it was a part-time project for Carolyn and her friends, visiting family and willing volunteers, with lots of ongoing input from Chip. 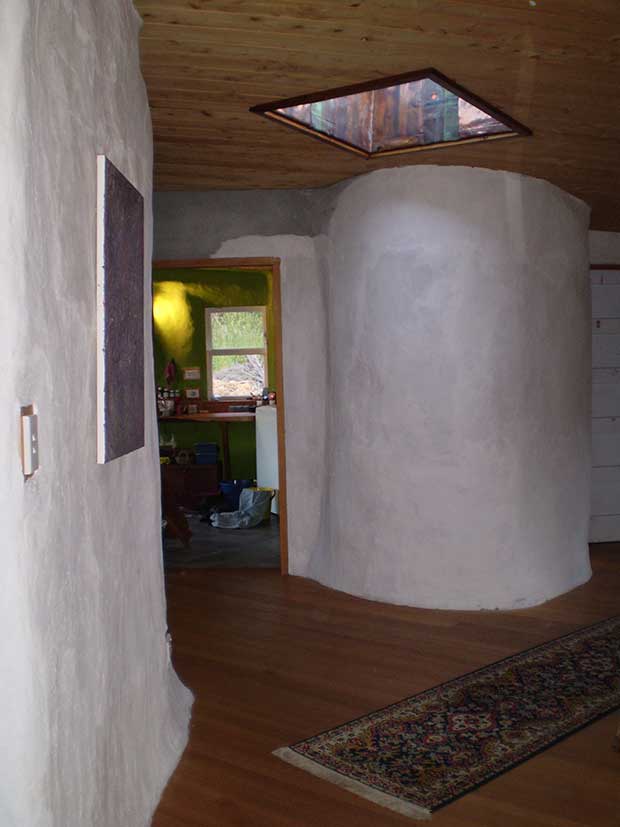 “We built the walls with the help of working bees with local people – they donated their time for a nice lunch – we did it gradually over a few years and I did it in my spare time. I had a plumber and electrician, then I got plasterers to do the plastering – I wanted a decent plastering job.

I was usually the one on the concrete mixer, there’s a lot of mortar to be made when you’re building with cordwood.”

All the cordwood in her home is pine offcuts from a (now-closed) local timber mill that they were selling for firewood. The mortar was made using pumice that the local farmers get barged into Golden Bay for their cattle tracks, and it also provides the insulation within the exterior cordwood walls. 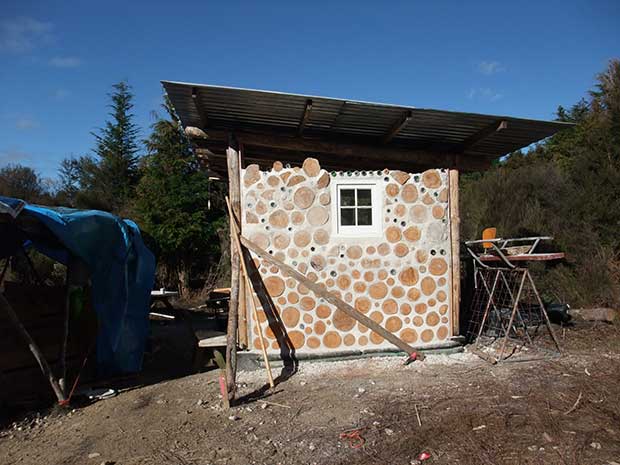 Instead of the usual aggregate (stone chips), Carolyn used a special ingredient that gave her mortar a bit of bling. “Everyone’s crushed wine and beer bottles! I’d just get a big load of crushed glass from the local tip, and that’s what we used for the inside walls (eight parts glass, two parts sand, one part cement).

I never wanted the cordwood exposed though – although it didn’t look too bad – but if you’re going to leave your walls unplastered you have to be careful and point all the mortar, otherwise you leave a place for cobwebs and bugs. 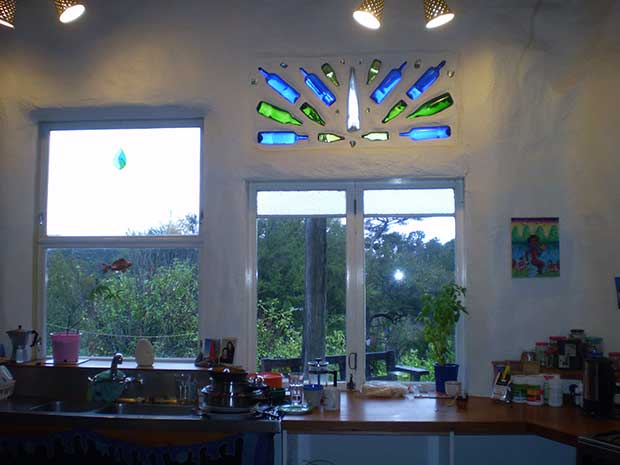 “You’d need a stronger mortar mix too. Also, lots of people built the walls so you could see where someone had done a layer, and then someone else had started a new bit – everyone’s individual style showed in the finished wall before it was plastered over.”

The 25cm-thick walls keep her home warm in winter and cool in summer.

“It’s a passive solar design, the only thing I use to heat it is an open fire (designed by Chip, a builder of funky ferro-cement fireplaces in his spare time) and it heats a big open plan kitchen, dining, living area, and that’s all the heat I need.”

Carolyn got to use old recycled windows because she built before it was a requirement under the Building Act to have double-glazing, and says getting decent drapes for the large windows will largely reduce any heat loss in winter. 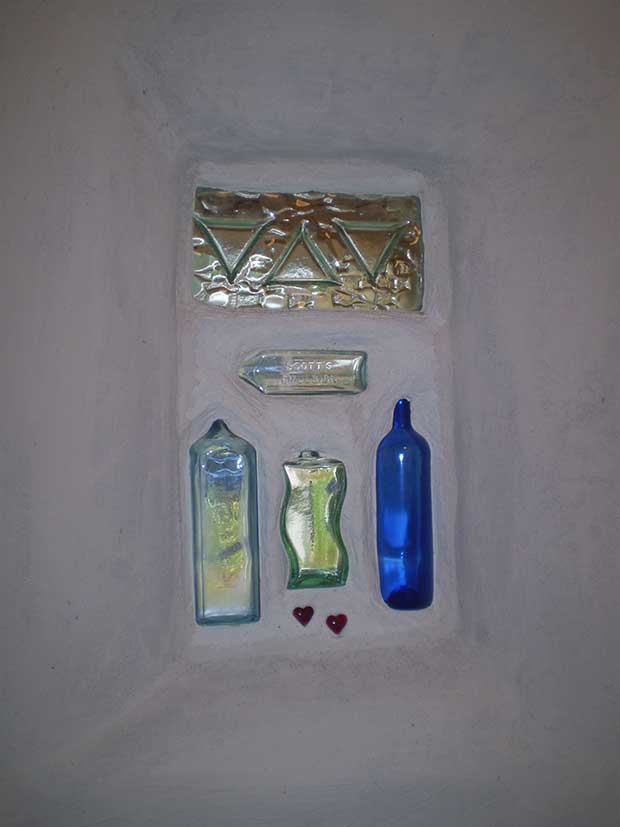 “It’s still a work in progress, there’s a lot of finishing to be done. I was determined not to go over the three year mark so we had a big push to get the house to a liveable stage and I moved in, but I still have lots of painting and other finishing to do.”

She never had any intention of building her own house when she started, but Carolyn says it was the best thing she’s done.

“Even after three years of building walls, we got to the end and I thought, ‘I’m going to miss doing this’. Some people probably thought I was foolish to build this house, but it just seemed to me like a good idea.  “I was incredibly naïve, I had no idea how long it was going to take or how much physical energy would be involved but once we were underway, I was committed, there was no turning back.

Then at every stage, when I realised the huge amount of work involved, I would think ‘oh my God, what am I doing?’ And then just get on with it.’ But now it’s done, I’ve got no regrets. 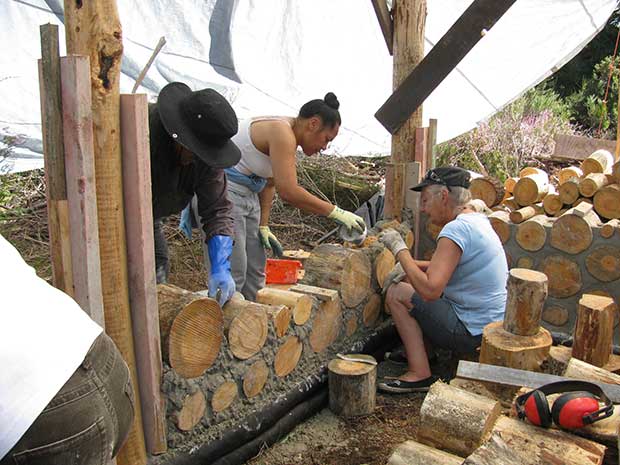 1. Give yourself time
Everyone who’s ever built a cordwood house says you need to know that while it’s a cheap option, it will take a lot of time, and Carolyn says she thought she understood until she was deep into it.

“It was actually a good process, I didn’t want it to take as long as it did but it turned out to be quite a blessing, I got to do some funky things which you wouldn’t get to do if you were rushing through. There are some features made out of wine bottles – you frame up a gap and put in a section of bottle wall, sort of (artist Friedensreich) Hundertwasser-style.

“I thought having all square windows in a curvy house was a bit of a contradiction so I started making round ones and I got to play a bit. I would say if you’ve got plenty of time, get creative.”

2. Have a good support team
Carolyn speaks in glowing terms about builder Chip Williams, and not just because he is good at working with wood.

“What was really helpful – and I can’t emphasise this enough – was Chip was really encouraging, he encouraged me to express myself in design because I didn’t have straight walls, so I went for it.”

She credits him with a lot of the ideas that she incorporated into her house.

“He’s a creative thinker, he’s very much into building eco houses, and we did a lot of recycling (on site) too, and created minimal waste.” 3. Get the right people onboard

It has been more than ten years since Carolyn put in her plans to get council consent, and a lifetime of changes have been made to the Building Act since then, so her advice for any would-be cordwood home-builders is to consult with your council, and with designers who have had experience with cordwood buildings.

“Because building regulations have tightened up so much since I got my consent, there are some things I can’t advise people on because you’re not allowed to do it like I did, they won’t have the same freedom. “There’s another cordwood house in Golden Bay now, and they did have to put a ‘gap’ (ventilation cavity) in. “They had to do a lot more than I did in terms of getting consent.”

A beginner’s guide to building a cordwood masonry home