City of volcanoes: A guide for exploring Auckland’s ancient volcanoes 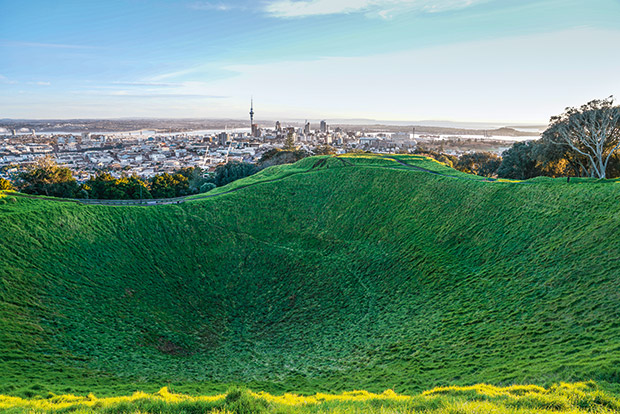 The view of Auckland CBD from Mount Eden.

Visitors come for the bars, rugby and big-city experiences. But beyond the hustle-and-bustle of the country’s largest metropolis, ancient mounds offer refuge from clamour.

One might expect the largest cityscape in New Zealand to be overwhelmed with skyscrapers. Instead, stretching from the Manukau Harbour to the Waitematā, green mounds rise above central Auckland and dot the narrow isthmus.

Forty-three volcanic cones are spread across 20 kilometres. Active magma has flowed for about 200,000 years, forming a scattered trail of vents at the surface in its wake.

The Auckland Volcanic Field is now considered dormant, with less than 0.1 per cent chance of an eruption in any given year. Māori settlers, who first moved to the region in the 14th century, found the crater rims and dips across the valley quite useful. Natural fortification and fertile soil made volcanoes such as The Domain (Pukekawa) and Mount Eden (Maungawhau) obvious choices for Māori pā, or fortified settlements.

The volcanoes are also loved by today’s city residents. But, now no longer used for protection, they are climbed by Aucklanders for fresh air and panoramicvistas. The cones stand as physical symbols of the past; Auckland War Memorial Museum crests the rim of Pukekawa. Easy hiking trails make most accessible by foot and, most importantly, their summits tower above most of the city. 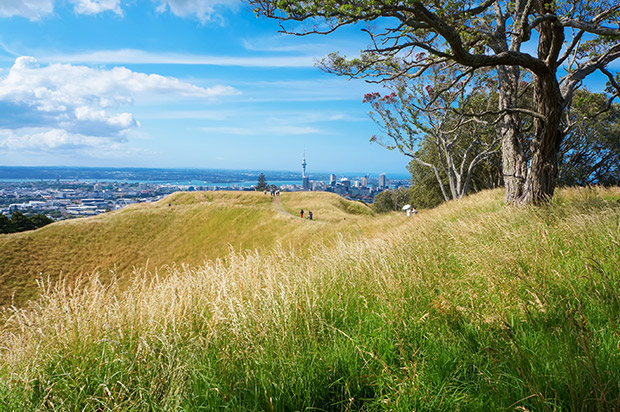 The appeal is simple: there is no better way to see the city than from this summit. The 20-minute climb reaches Auckland’s highest natural point with 360-degree views to the Hauraki Gulf and Manukau Harbour. It’s no wonder Maungawhau is favoured by locals unwinding or sharing a sunset spread of fish ’n’ chips. It feeds the soul. Follow the path around the bowl-shaped crater for a perfect spot.

The crater was formed from an eruption about 28,000 years ago, the result of three overlapping scoria cones. While it was once favoured by kids for a wee tumble, its sacred nature is now recognized with a total ban on entry. It is spiritually significant to the Māori, whose ancestors occupied Maungawhau, and the terraces they cut are still visible.

More stories you might like:
England on foot: A writer stumbles upon ancient pubs and Yorkshire pudding on the 308-km Coast to Coast walk

Guided tours with in-depth Māori history are available for a fee from Ngāti Whātua Ōrākei at tamakihikoi.co.nz 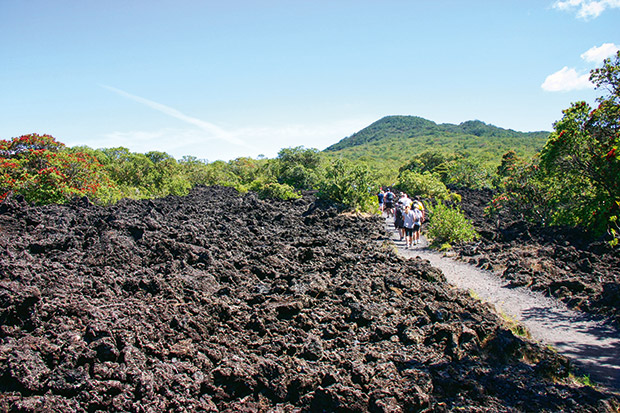 It makes sense that Auckland’s youngest volcano gets the most attention. Rangitoto is only 600 years old and, unlike some of its more lopsided siblings, spills into the Hauraki Gulf with near-perfect symmetry.

The largest of Auckland’s volcanoes, Rangitoto towers beyond the North Shore and is visible from many points in Auckland. It requires a four- to five-hour day trip into the Hauraki Gulf to reverse the vista, and trust us — it’s well worth it. Choose a cool day to visit because the lava fields make this island deceptively hotter than the mainland. Its arid terrain is one of the reasons that Māori never lived here, instead using Rangitoto as a lookout in times of war.

The hike to Rangitoto’s summit is nothing like grassy strolls on other Auckland volcanoes. The one-hour track (built by prisoners in the 1920s and 1930s) crosses broken lava fields, thick bush with kākāriki and saddlebacks singing above, and exposed parts of the trail that amplify the heat. 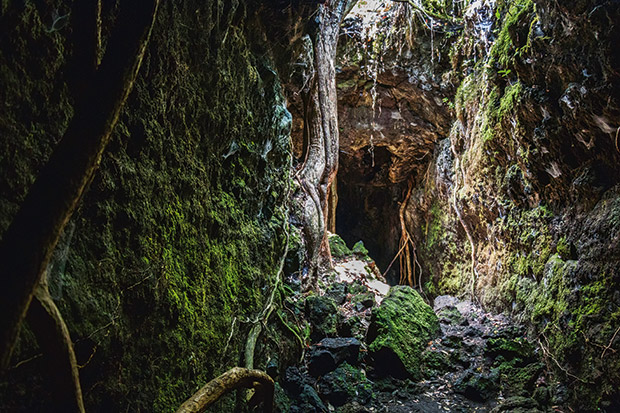 At the top, pōhutukawa trees tumble across the island, making up the largest pōhutukawa forest in the world. The panoramic views stretch across the water from the Hūnua Ranges in the east to the Waitākere Ranges to the west.

Take it easy on the way down with a stroll through the pitch-black lava tunnels and kill time while waiting for the ferry by taking a look at one of the historic 1920s baches dotted along the coastline.

More stories you might like:
Gore to Lawrence: What to do, what to eat, and where to stay

Access: Take a 25-minute ferry from the Auckland Ferry Terminal to Rangitoto. Ferries depart several times a day and the last one from the island is usually at 4pm (later in high summer). Wear appropriate shoes and take plenty of food and water because nothing is available on the island. 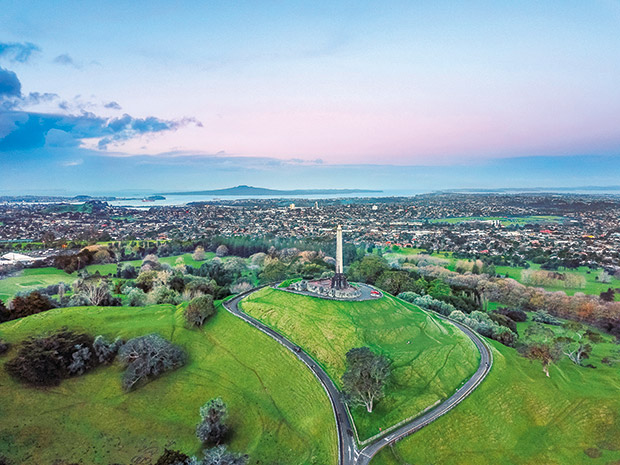 It’s easy to imagine that Auckland’s second-tallest volcano was once a sprawling Māori settlement planted in kūmara. At its peak, thousands of Māori resided around the three pā that make up what is now known as One Tree Hill.

The terraces cut into the dormant volcano remain and are a subtle reminder of the city’s pre-European past. The vista on a clear day rivals that of Mount Eden.One Tree Hill is best known for the memorial perched at its peak, which can be seen from across the city. When Sir John Logan Campbell donated the land to the city in 1901, he requested an obelisk be built for Māori. It was later revealed that the Auckland mayor had reserved 5000 pounds in his will to fund the monument, which wasn’t unveiled until 1948. Sir John was buried on the summit next to the obelisk.

One Tree Hill is the tallest part of Cornwall Park, a 270-hectare green oasis with winding paths, gardens, barbecue pits for picnics and hundreds of sheep and cows. It’s the inner-city’s biggest green space and there is always something going on. Join the five-kilometre group run at 8am every Saturday, or take the kids to the Stardome (stardome.org.nz) for a planetarium show. Nothing, however, beats a spring-time stroll. City-dwellers flock to the park for newly bloomed flowers and newborn lambs stumbling across the grass.

Access: Free parking is available around the grounds. It takes about 30 to 40 minutes to walk from the centre of Cornwall Park to the top of One Tree Hill.

TRIP: KAYAK AT SUNSET TO RANGITOTO 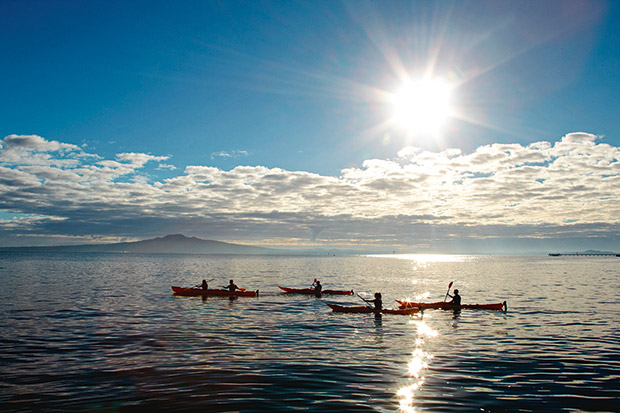 Something magical happens once the ferries stop running to Rangitoto Island. Post-4pm, the volcanic island slips into a peaceful slumber and can only be reached by private boat. That’s when Auckland Sea Kayaks comes in, providing the means for adventurers to glide across the Hauraki Gulf before setting off along the Rangitoto Summit Track. While scaling an uninhabited island is a treat in its own, the tour peaks (literally) on the summit as the sun slides behind Auckland City. The seven-hour trip, which includes a barbecue dinner, concludes with an unforgettable moonlit kayak back to the city. Tip: Book on a night with a full moon to see the water glow. 384 Tāmaki Drive, St Heliers, (09) 213 4545, aucklandseakayaks.co.nz Volcanoes of Auckland, a field guide perfectly shaped to fit into a backpack, will answer every question a climb up a volcanic cone might provoke and explain the fiery, natural world that so deeply shapes this city.

This is an excerpt from The Insider’s Guide to New Zealand 2020. Click here to order your copy.

Ōamaru: What to do, what to eat, and where to shop along the town’s quirky Harbour Street

Whakātane and Ōhope Beach: What to do, what to eat, where to stay