One couple’s journey to running the fastest-growing snack company in New Zealand — from baking cheesecakes in the United States to crafting the perfect crisp in the South Island.

For Mina Wilke-Smith and Ned Smith, it started with a grocery trip for olive oil and spices. Their kitchen cupboards were bare and needed some serious stocking.

“Have you tried these crisps?” the shop assistant asked. The starchy snack didn’t appear on their shopping list, but nevertheless, the couple added a packet of Proper Crisps to their basket. “They’re the best, trust me,” he said. “Their company is actually for sale.”

Sure enough, there in the window of the real estate agent down the road, was a photo of Proper Crisps’ then-owners (British couple Stuart and Kathryn Franklin) surrounded by a border of crisps.

“It was pretty intriguing, but we both looked at each other and said, ‘No, we won’t look at this, we’re not in the market to buy a business,’” Mina says. But it only took a couple of weeks of thought and a few bags of Marlborough Sea Salt crisps for Ned and Mina to decide: “Okay, maybe we will.” 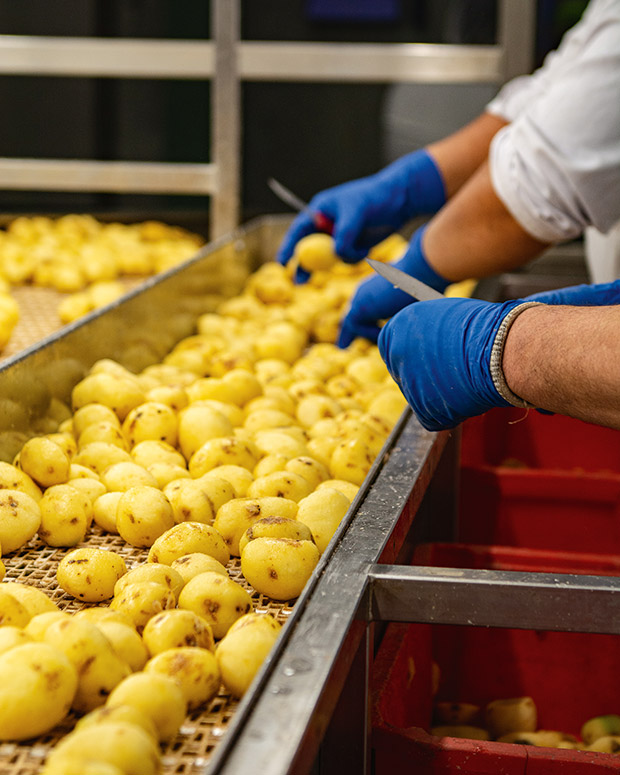 The Proper Crisps story started 13 years ago when Stuart and Kathryn decided New Zealanders were being short-changed in the crisp market. They set up a business handcrafting crisps in a small food factory in Upper Moutere. “There were no great crisps in the country at the time,” Ned says.

Ned, originally from the United States, had experience making artisanal food as the owner of multiple bakeries there. “We were making food just like mum would make it at home.”

More stories you might like:
The farming family taking the endangered whio under their wing at Blue Duck Station

He started as a chef (first, as a kid, washing floors in a neighbour’s restaurant) in Chicago before heading to California. “San Diego was a kick-back beach city at the time, so there wasn’t much going on cuisine-wise. There were a few nice restaurants, but no easy opportunities, the guys were all really entrenched.” 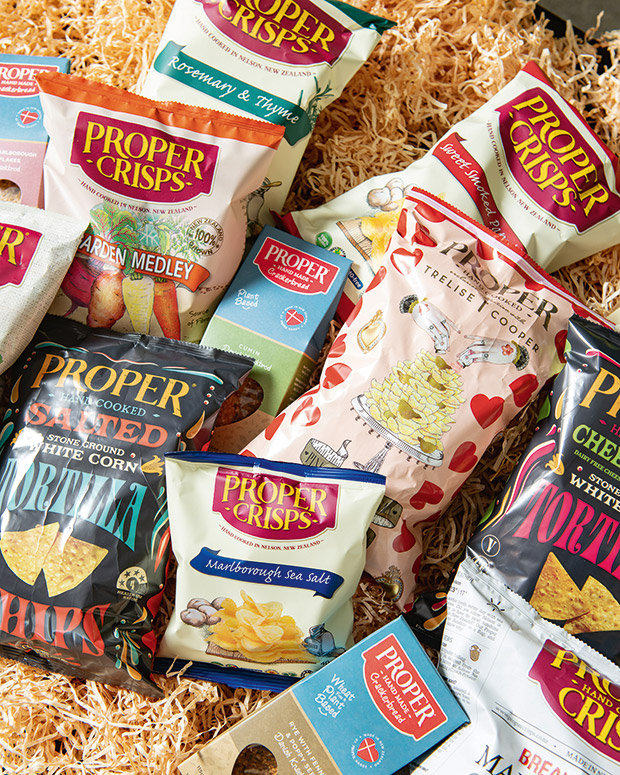 There wasn’t much more to do than fry eggs at a Holiday Inn or a Denny’s restaurant. In the mid-1970s, Ned said, ‘Forget that’, and started working in a bakery instead, swapping his chef’s knives for whisks. Then came the cheesecakes.

“I got involved with making cheesecake from scratch, mixing them at home in a baby’s bathtub because we didn’t have the money to go and buy what we needed.” Carrot, banana and chocolate cakes followed, every egg hand-cracked even as the business, Ne-Mo’s Bakery, grew to become a national company.

Mina also identifies as a foodie. She grew up in South Africa (later moving to the United States), her love for cooking instilled in her by her French mother. Design and art were also passions. She met Ned at a Christmas party organized by his sister, though they didn’t get together until years later.

“I brought a vegetarian dish that night, a potato dish with tomatoes and onions, that he either pretended he liked, or he truly did.” 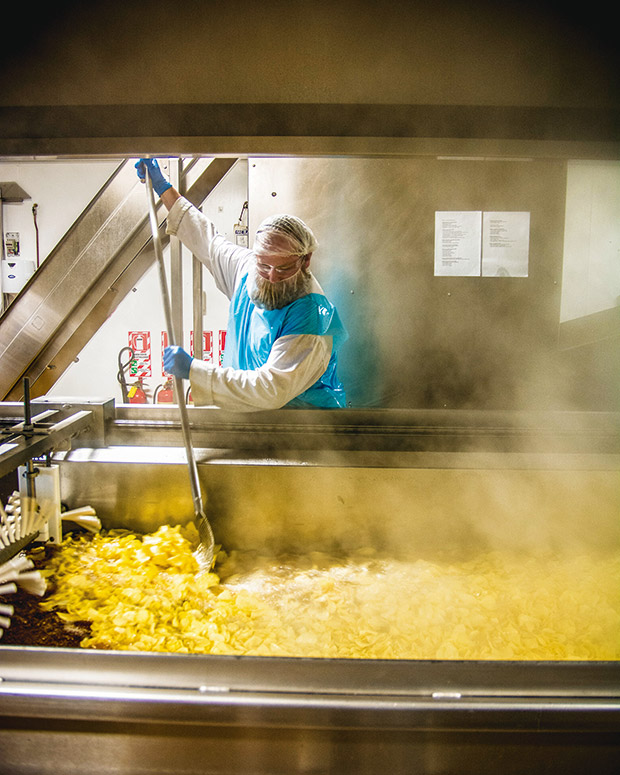 The couple sold the bakery business in 1999 and spent the next decade traveling, looking for a place to call home. They signed up to culinary classes everywhere they went; spices were ground for mole sauce in Oaxaca, Mexico, trout oven-baked in the Sacred Valley, Peru.

The Pacific was always on their radar, and eventually, the promise of long summer days enticed them to Aotearoa. They bought a home in Tahunanui in 2009, becoming the “head potatoes” at Proper Crisps the following year. “From day one, we knew we wanted to extend the flavour range and go international.”

At the time, Proper Crisps had about 200 stockists countrywide, from small independents to markets such as Nosh and Farro Fresh. In the company’s first year, Stuart and Kathryn used about eight tonnes of potatoes.

More stories you might like:
Tattoos and eco-printing: Why this Featherston couple built their life around permanent pigments

Today, the business employs more than 22 tonnes a day. There are also over 55 employees; Ned and Mina have even introduced night shifts to keep up with demand. 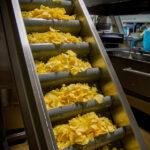 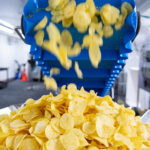 Inside Proper Crisps’ Stoke factory, crate after crate of potatoes are stacked towards the ceiling. “We had to move factories eventually,” says Mina. There were water restrictions in Moutere that added an extra barrier to producing crisps at the scale they needed; the noise from trucks rolling through also didn’t go down too well in a rural environment.

Ned and Mina front-footed the cost of new team additions, including a salesperson, engineer, accountant, as well as equipment. The growth was necessary; in their first year, revenue increased from $400,000 to about $1.2 million.

The biggest challenge was running Proper Crisps remotely. The couple has children and grandchildren in both New Zealand and the United States, so usually spend five months a year living in San Diego.

“We lived in two worlds; we still do. We immediately had to learn how to be comfortable not having our eye on the ground.” This was before the days of Zoom and WhatsApp, and with California 21 hours ahead of New Zealand, phone calls could be tricky to arrange. “We built strong ties out of that, though. We realized we could trust our team and they could trust us,” Ned says. “We kept the business close in the first year and built it up from there.”

Things have been kept local. Agria potatoes are sourced from the same third-generation South Island Temuka farmer Proper Crisps has worked with since inception. The high oleic sunflower oil used by the brand is also Canterbury-grown.

Business in New Zealand may be slower-paced than they’re used to, but they prefer it that way; it’s small, community-minded, and they can present boxes of product to suppliers face-to-face. Mina jokes that in the United States, they’d probably have to make an appointment to see a buyer six weeks in advance.

More stories you might like:
Nostalgia for chasing waves in the 1960s inspired this surfer to restore a 1963 Ford Falcon XL 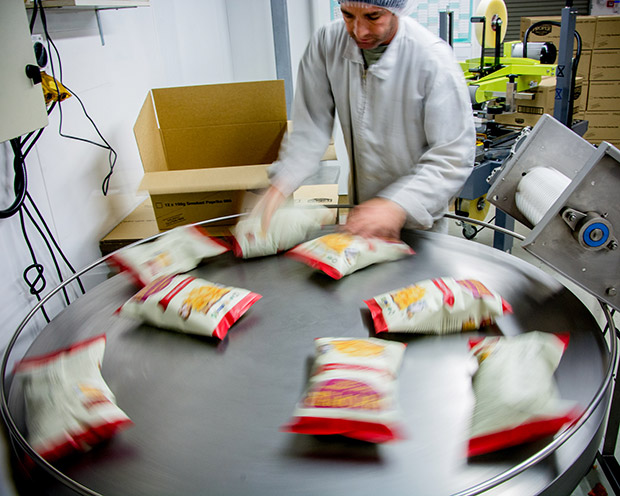 There are now 14 flavours of Proper Crisps. Mina raided her garden to develop the Rosemary & Thyme variant, rubbing the herbs and sprinkling them on crisps. It took 54 takes to get their beer crisps just right; hops are bitter to work with.

Line’s Knækbrød (a Danish crispbread) is the newest addition to the Proper family, bought from founder Line Hart, who decided to sell her business over lockdown. She’s handed over the rolling pin (a marble one, in fact, so ingredients don’t stick) to Ned and Mina.

“She shares the same values as us. Our food has always been based on homemade goodness away from home,” Ned says. Be it cakes, crisps or cracker bread, doing things “Properly” is a value the couple hold to firmly. Heat a generous glug of olive oil in a sauté pan over a medium heat. Cook the red onion and garlic for 5 minutes. Add the cumin, fennel seeds and oregano. Cook for a further minute.

Add the tomato paste and black beans and sauté for 4 minutes. Remove from the heat. Add the lemon juice, ¼ cup olive oil and water. Use a food processor or stick blender to blitz until reasonably smooth.

Taste and season generously with sea salt and cracked black pepper. Place in the fridge to cool completely before serving with Proper Tortilla Crisps. Sprinkle over the spring onions.