Delivering a difference: Pacific clinics get a helping hand with repurposed medical equipment and prosthetics Medical equipment that would have ended up in the rubbish dump is getting a new life in the Pacific Islands thanks to an innovative social enterprise.

From the medical trolleys and drip stands to the electric beds that zoom up and down at the touch of a button, it’s easy to take medical equipment for granted.

In the Pacific Islands, there’s no such luxury. In Tonga, Fiji, the Solomon Islands and Vanuatu, there are shortages of essential, if-basic items. But containers are now arriving in island ports brimming with repurposed medical equipment from New Zealand hospitals.

The development is thanks to an energetic former television producer who is trying to overturn society’s throwaway culture. Ten years ago, Janette Searle was helping out at a medical conference and got talking to someone about prosthetic limbs. She was surprised to discover that when New Zealanders upgraded their prosthetics or passed away, their limbs were junked.

END OF THE LINE

Regarding this as a missed opportunity, within days she had been in touch with the Hope Rehabilitation Society in Pakistan, a professional prosthetics clinic, and wasn’t surprised to find it was crying out for limbs.

“We ended up sending 400 kilogrammes of prosthetic parts that were obsolete and limbs that had been used and cleaned up but couldn’t be used here,” says Janette. 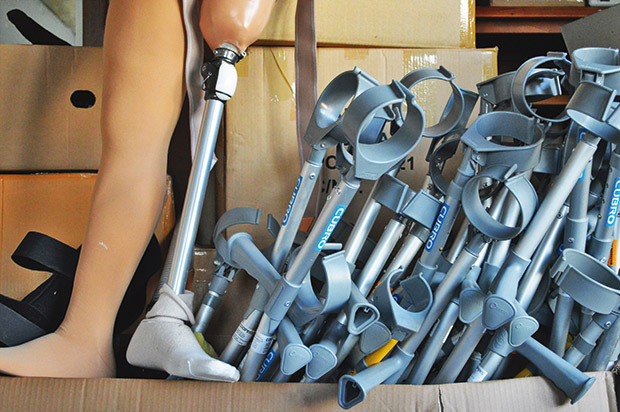 “We were able to do that for $50, using the spare capacity that existed in the transport and storage sectors and people’s time.”

Spare capacity. That prosaic term is what underpins the success of Take My Hands, the social enterprise Janette subsequently set up to distribute used medical equipment, which now operates throughout the Pacific Islands.

More stories you might like:
Oamaru couple behind Craftwork Belgian ale make wild yeast brews in a low-ceilinged cavern

Here’s how it works. Courier and freight companies gift Take My Hands spare space in their vans, trucks and warehouses, allowing medical equipment to be picked up from hospitals and clinics for free. Shipping lines, and occasionally airlines, do the same, meaning container-loads of equipment can be shuttled all over the Pacific for next to no cost.

“For more than five years, PBT has been using spare space in its courier vans to pick up three or four boxes of things in Christchurch or Wellington and deliver them to us. It works because we can be flexible with our timing,” she says. Another important partner is Pacific Forum Line, which operates five large container ships between New Zealand, Australia and the Pacific Islands that regularly sail with a container full of donated equipment.

Crucial to the operation is Take My Hands’ approach to tracking its shipments. Software itemizes every piece of equipment and updates its location.

“It gets put into our inventory, and when it is going to be loaded into a container, we send what is in our inventory over to our partner. We know what container it went into, what country it went to, when it left and arrived,” says Janette.

Take My Hands will send only equipment that is actually needed. It sounds logical but it isn’t always practised by other well-intentioned groups shipping equipment to the islands, as Janette discovered on a trip in September to visit Take My Hands’ partners in Tonga.

“They showed us a 40-foot container of ad hoc donated medical equipment that had just arrived,” she says. “They had no idea what was in it or if it was going to be useful. It added a massive workload.

“Whatever they can’t use ends up in the landfill.” The data-driven approach extends to calculating Take My Hands’ impact, which has been substantial. Nearly 10 years of work in 15 countries has helped 281,075 people, with 94,000 kilogrammes of equipment shipped, and a financial impact of $9 million. All of that cost Take My Hands $43,000.

But for Janette, it isn’t numbers but the human stories that keep her committed to the enterprise. It’s the hairdresser in Pakistan who lost a leg in a car accident and had to quit his job due to the agony of standing all day on an ill-fitting wooden prosthetic. A photo arrived showing him standing on a refurbished prosthetic sent from New Zealand. He was able to get back to work and provide for his family.

It’s the pregnant mothers in the Solomon Islands who no longer have to lie on mattresses on the floor, thanks to the outdated hydraulic beds Take My Hands shipped to them.

“That’s why I carry on doing what I’m doing,” says Janette. A project with Fisher & Paykel Healthcare and the University of Canterbury was aimed at broadening to biomedical equipment the type of goods Take My Hands could collect and donate.

Some of it needs specialist knowledge to operate and is sensitive to the humidity and salty air in the islands. Take My Hands is now seeking to build capacity among nurses and technical staff in the islands to maintain donated equipment that could make even more of an impact.

The successful Take My Hands model could be extended to farm equipment, building supplies and educational materials, says Janette, who knows the power of giving unwanted equipment a second life and the value of a bit of spare capacity. takemyhands.org

There are an estimated 1.2 million unconnected, unused mobile phones lying in drawers, attics and storage lockers around New Zealand. People hang onto them because they are worried about someone accessing their data. But RE:Mobile, the country’s only accredited phone recycler, will erase the data and either refurbish the phone to use again or strip it down, with 95 per cent of its parts able to be recycled. Drop off those old phones to RE:Mobile at one of 400 collection locations around the country, including any 2degrees, Spark, Vodafone or Noel Leeming stores. Uplift Bras knows that bras are too expensive for women in many developing countries so the not-for-profit is happy to take good-quality cast-offs and send them to the islands. Keep those unwanted bras out of the landfill and make life easier for Pacific wāhine.