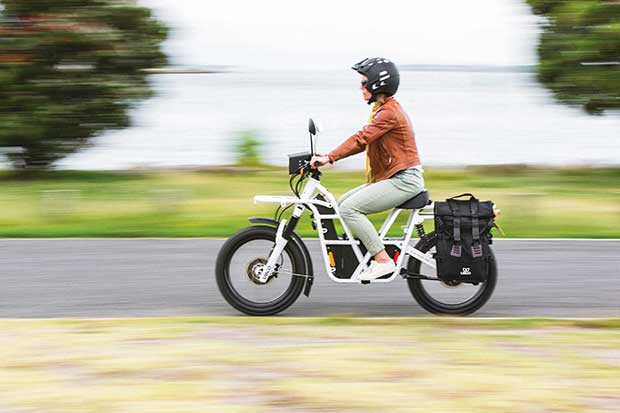 An award-winning New Zealand-designed electric utility bike for the farm is on the road to success in the US market.

When the UBCO 2×2 electric utility bike launched at Fieldays in 2016, it was a strange sight among the hulking tractors, burly quad bikes and rip-roaring cherry-red motorbikes for sale. The New Zealand-designed UBCO is a farm bike, but not as we know it.

It’s as quiet as a mouse, has a non-showy, compact 64.5kg frame with a battery that plugs into a standard power socket. There’s no petrol tank, exhaust or external drive motorbike chain.

While the UBCO has been winning a slew of awards (The International Innovation Award at the 50th New Zealand Agricultural Fieldays, a Wellington Gold Award, Deloitte Fast50 Rising Star award), it’s also winning over farmers, who like that the quiet bike doesn’t scare cattle and game, as well as the low running cost of approximately 88c per charge. The Tauranga company has sold 1000 bikes, which retail for $7999, since launching and is quickly expanding into the US and Australian markets.

CEO and product designer Timothy Allen knew he was on to a winner when he saw an early prototype for the bike by Wellington engineer Daryl Neal and Ohope product developer Anthony Clyde, in a grassroots innovation award in 2014.

“It’s a clever design and there was nothing else like it on the market,” says Timothy, who has worked on product design and commercialisation with companies such as Fisher & Paykel Healthcare, Pan Pac Forest Products, Boeing, Carter Holt Harvey, and Alto Packaging.

His product-development firm Locus Research joined forces with Daryl and Anthony to develop and refine the concept. UBCO became a stand-alone company in 2015 and had its first round of angel investment that year so production could start. By 2016 the firm had bikes ready to sell at Fieldays – a lightning-speed launch for a start-up manufacturer.

Timothy says the product design strategy is similar to Henry Ford’s Model T, famously available in any colour “so long as it’s black” for most of its years in production.

The UBCO comes only in white and there’s just the one 2×2 model which is upgraded each year. By limiting the product range and sticking to its knitting, UBCO can focus on refining the design and growing its market share, says Timothy.

The 2018 upgrade has been a gamechanger in the US as earlier models didn’t meet all of that country’s tough compliance standards. The 2018 model is now road legal, and the moped-classed vehicle can be ridden legally on the road with a standard driver’s licence.

“This change has opened up that market a lot more and expands the uses for the bike; it can now be a commuter or recreational bike.” 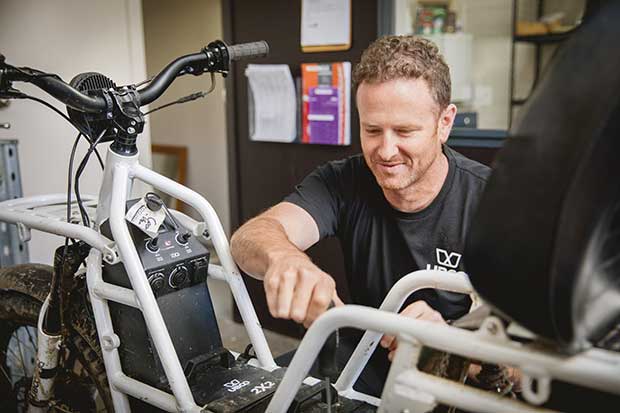 The UBCO 2×2 has a lightweight frame, low centre of gravity and two-wheel drive which makes it safer to drive than standard farm bikes and quad bikes. The bike can run for 120km on one charge and has a maximum speed of 50km/h.

It has a portable 48Ah lithium-ion battery system which can be charged in six hours.

More stories you might like:
1962 Porsche 356B Karmann Notchback Coupé is a smooth ride on New Zealand's country roads

Tourism company Real Journeys purchased 16 bikes for an off-road experience at Walter Peak in UBCO’s first year of operation. “It was early days, and a big sale like that gave us validation that it was a good idea and a nice case study to show other clients.”

Support from NZ Trade & Enterprise to attract US investment and, in turn, establish a US distribution company helped the company rapidly expand into this market.

UBCO is a complex global operation. The New Zealand team has 14 staff, and there are four in the US.

They have a supply chain where parts are manufactured in the European Union, the US, New Zealand and China. Quick Circuit contract manufacturers in Auckland build the robotic “brain” but the bikes are assembled in China. Maintaining the supply chain so that UBCO can keep up with demand is hard work.

Timothy continues to focus on the US market, but by the end of the year, hopes the bikes will be for sale in the EU too. An exhibition at the Global Forum for Innovation in Agriculture in Australia later this year could open more doors. “There’s a tendency for Kiwi companies to stick around in the New Zealand market for a bit too long before trying to export. Getting your product offshore as early as you can is a good idea and an easier way to attract investment.”