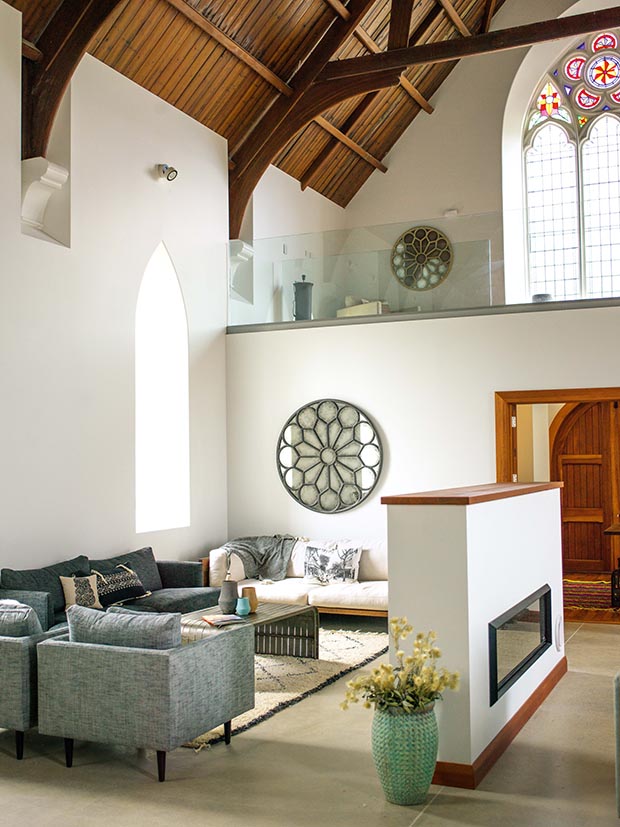 Breathing new life into an old church has taken more than a decade and cost twice the estimate but the owners are in heaven.

Brendon Urlich wandered up the front path to his holiday home, kicked his shoes into the pile of jandals already at the front door and wandered inside. Before he could close the door several people from a minivan parked on the roadside followed him inside after neatly depositing their shoes at the door.

“Whoa,” he said holding up his hands. Ascertaining they were Russian tourists, he tried (with his best “Olaf the Russian tour guide” impersonation) to tell them with gestures and pidgin English that his private home might well look like a church, in fact used to be a church, but was no longer a church. It was his home.

After a moment of bewilderment, the visitors realized that they weren’t in a sacristy but a kitchen. With good grace, they retreated out the door, down the path and climbed back into their minivan and disappeared.

“Who was it this time?” called Brendon’s wife Kerry from within the church living room. 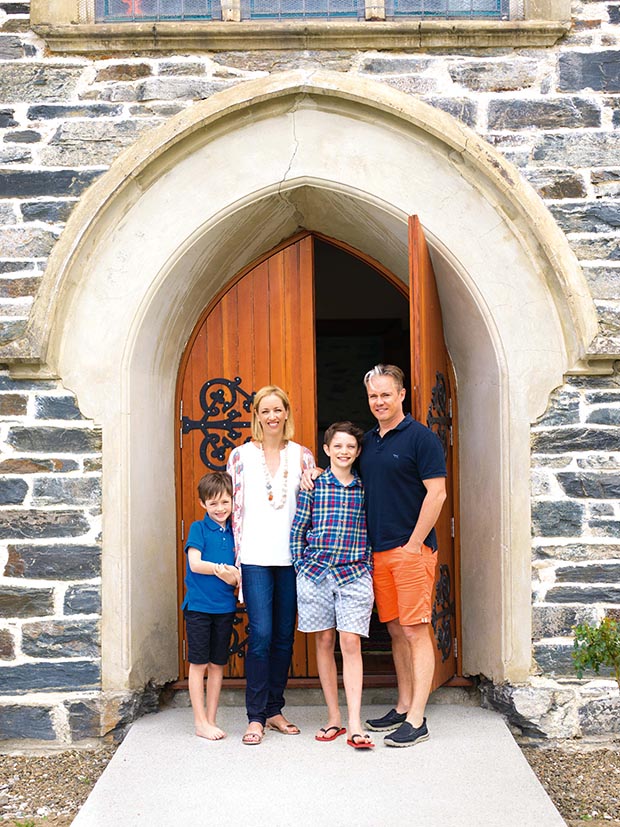 Kerry and Brendon Urlich and sons Luka (left) and Jaydon return twice a year from Ho Chi Minh to their lakeside Cromwell home for winter and summer holidays.

They’re used to this, holidaying as they do in the old Presbyterian church on the banks of Lake Dunstan in historic Cromwell Town. When it is locals who come peering or knocking, curious about progress on the old church, Brendon and Kerry are more likely to invite them in for a quick look around. It pleases them that after more than a decade of effort saving and restoring the deconsecrated church it is now a source of pride. Not just for local tradespeople, whose long slog brought the building back to glory, but its former congregation members too.

Brendon wonders if these same proud locals were among those who, in 2004, complained that “foreigners had bought our church”. 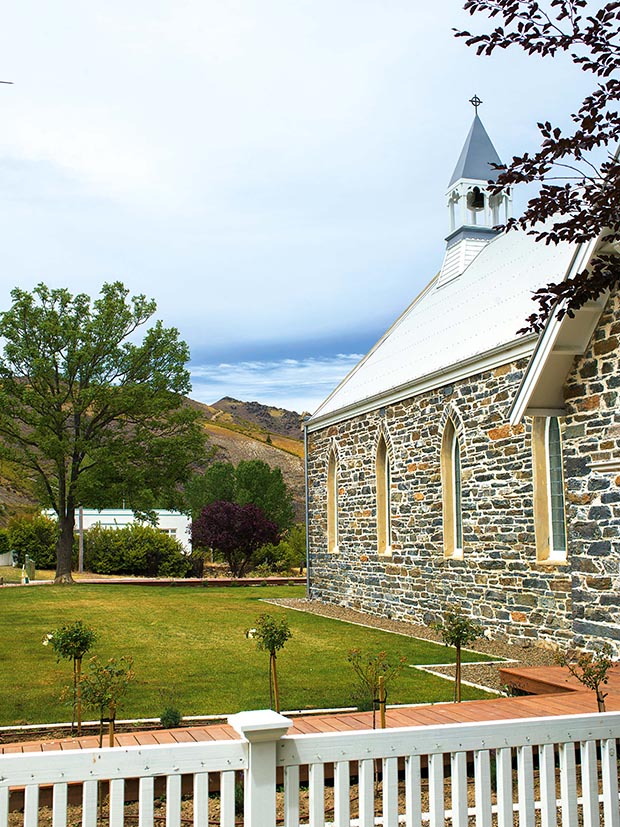 The church bell, named “Old Suzy” in honour of Kerry’s deceased mother, can be rung from a rope above Kerry and Brendon’s bed.

It’s true that Brendon and Kerry have spent almost all their adult lives outside New Zealand, as Brendon’s career with multinational companies has taken them from Burma (in their early 20s) to Singapore, Dubai, Serbia and London before a five-year spell back in New Zealand and then off to Vietnam two and half years ago. However, they are only as “foreign “ as their respective Kaitaia, Mt Eden, Balmoral and Upper Hutt childhoods could allow.

Quite how Kerry and Brendon, who had never been to the barren hot-and-cold mountains of Central Otago until 13 years ago, ended up passionate about the region and besotted with a stone building still rather astounds them both. 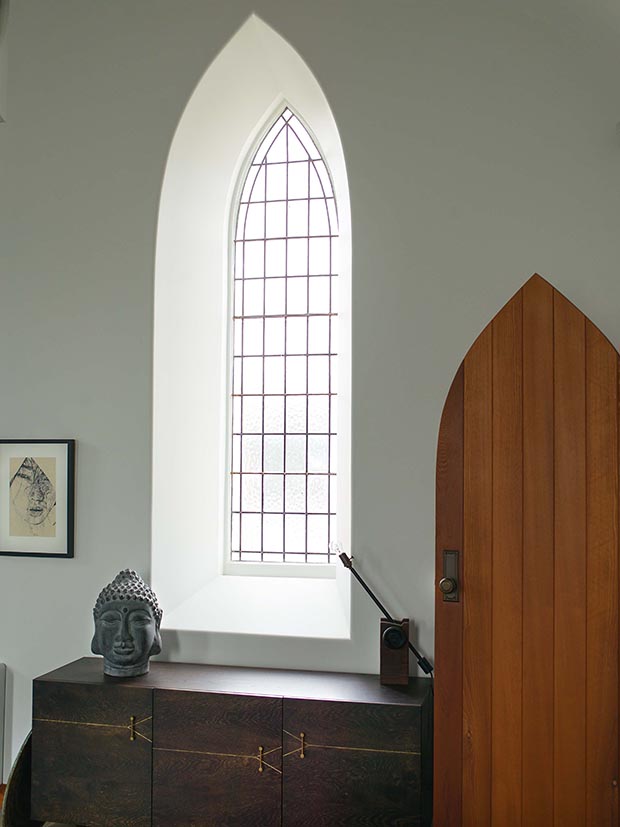 The walls of the 140-year-old church were already double-depth stone before a 20 centimetre-thick false interior wall was added to hide masses of insulation and structural steel.

Kerry’s childhood family holidays were spent traveling the North Island in one of the many VW Kombi vans owned by her dad. They were usually heading for VW conventions (allowing for recurring breakdowns) but only ever reached as far south as Nelson.

Brendon’s childhood holiday memories were made in the subtropical bush and warm blue seas around Kaitaia and at Ahipara Bay. And, since becoming expats, the pair’s New Zealand holidays tended to revolve around always visiting family and friends in Auckland, Hawke’s Bay and Wellington. 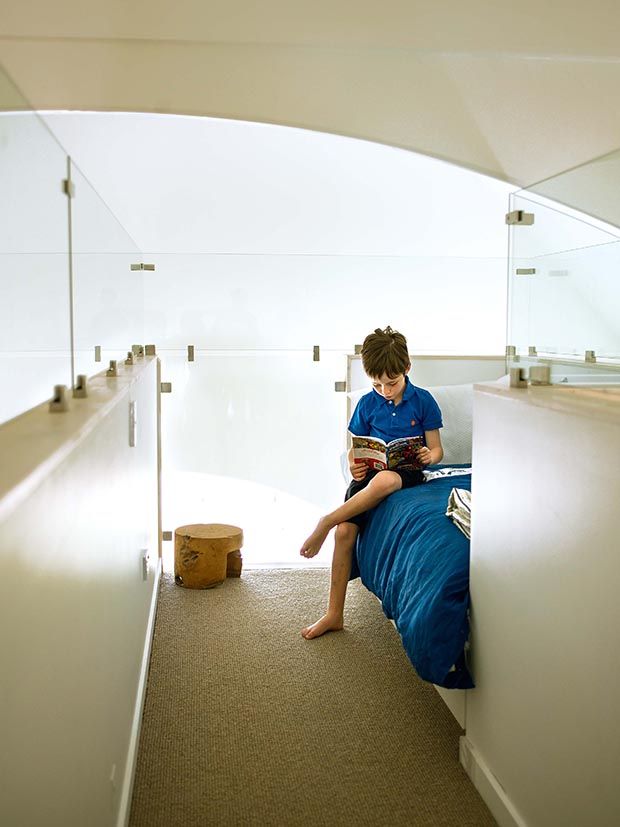 The boy’s bunk-style bedrooms are above the second bathroom.

Then their world tipped slightly on its axis during a visit to friends who had moved to Cromwell to open a café. A last-afternoon bike ride took them to the historic precinct on the water’s edge. There, outside an imposing stone church was a “for sale” sign. Many times since then, they’ve asked themselves, “What the hell have we done?”

“When we spied the for-sale church my reaction was immediate. ‘Oh my God Kerry, the position of that church is insane. It’s right on the waterfront, right over the lake.’

“We had a quick poke around but we were returning to Dubai the next day. We worked out an offer quickly on a serviette and placed it with the real estate agent on the way to the airport. Part of the offer was for the church to have free rent while building a new church in the new part of town.” 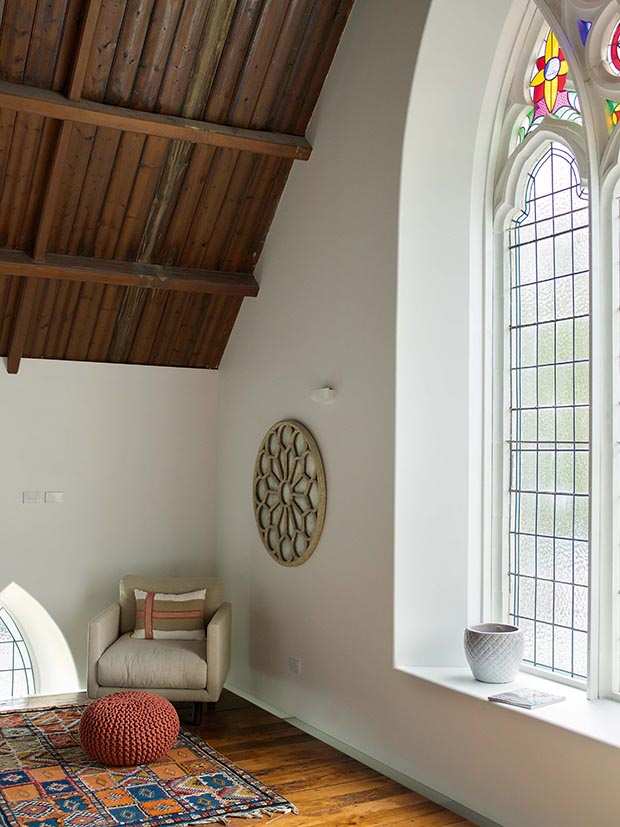 The master bedroom is elevated above the main living area and is often flooded with morning sunlight filtered through the stained-glass window.

And that was the beginning of something Brendon describes as totally fiscally irresponsible but so significant for their family (now numbering four) that he and Kerry have put the property into a tightly controlled trust for their two boys, Jaydon, 12, and Luka, 8. These thoroughly cosmopolitan boys, currently attending the International School of Ho Chi Minh City, love their Central Otago lakeside holidays for reasons that may confuse local kids.

“Luka loves being able to walk to the dairy by himself,” says Kerry and explains that an equivalent trip in Saigon would involve a driver and a helper to escort him and the destination would be a boring 7/11 store with none of the lollies and chocolate-dipped ice cream wonders of a Kiwi dairy. 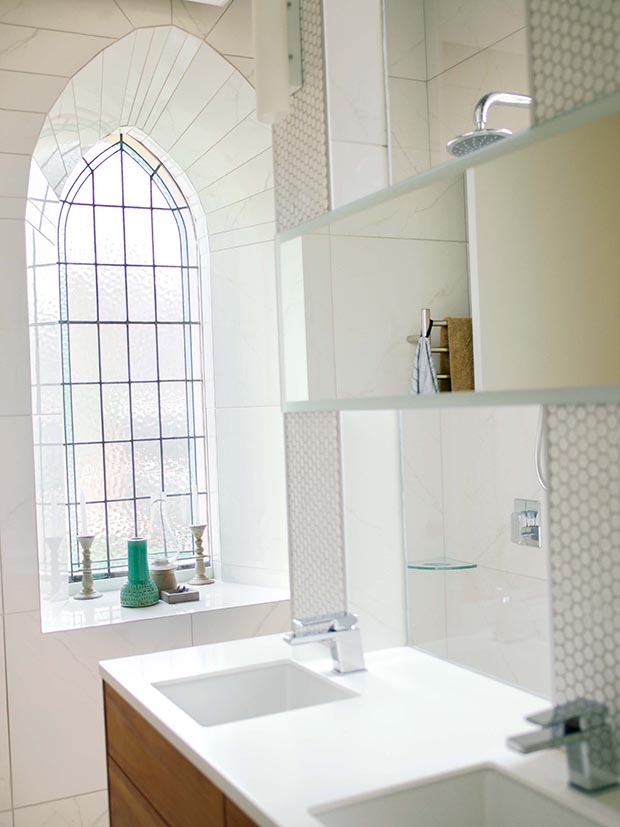 The tiler faced a tough challenge in the steepled window of the master bathroom. “Craftsmanship of this quality is amazing,” says Brendon.

“Yesterday, as Luka and I were walking to the dairy together, he commented that we were walking on a really lovely footpath. It made me realize how they see the world. It’s so orderly and calm here by comparison to the colourful chaos of Vietnam and the boys enjoy that change.”

Brendon likes to tell the boys to stop and listen. ‘To what?” they ask. “Exactly,” he replies. “There’s nothing to hear. In Saigon, there’s a constant white-noise background to life. Drivers use their horns like radar sonar, just to let people know they are there. Honk honk. Beep beep.” 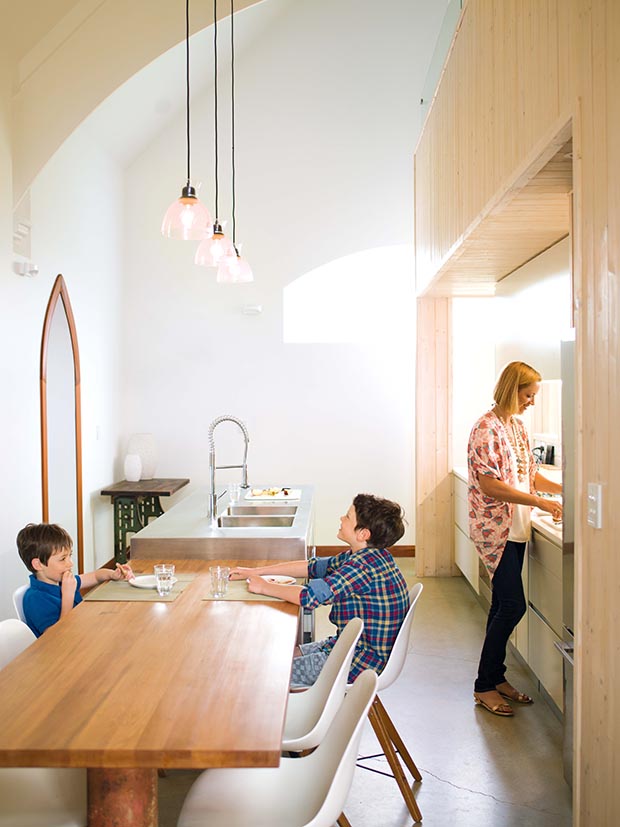 Recycled rimu floor joists have been reused in the skirting and the kitchen joinery.

But down by the lake in Old Cromwell Town where the sounds are individually identifiable and the stars are diamond bright in inky night skies, Jaydon and Luka can muck around all they please on the ruins of the old museum, run along the wobbly top of a falling down stone wall, and sit in the shade under wild plum and apple trees without a driver or helper in sight. Quite possibly not another soul in sight on some days. And if the lake is warm there’s biscuiting, swimming and paddling to do. And at coffee time, if they accompany Brendon and Kerry on their morning saunter to Armando’s Café in the old precinct, there’s a hot chocolate to be drunk.

The Urlich family come home to Cromwell twice a year; in addition to their summer holiday there’s always a mid-winter visit to the Cardrona slopes where the boys and Kerry ski while Brendon perfects his recently acquired snowboarding skills. 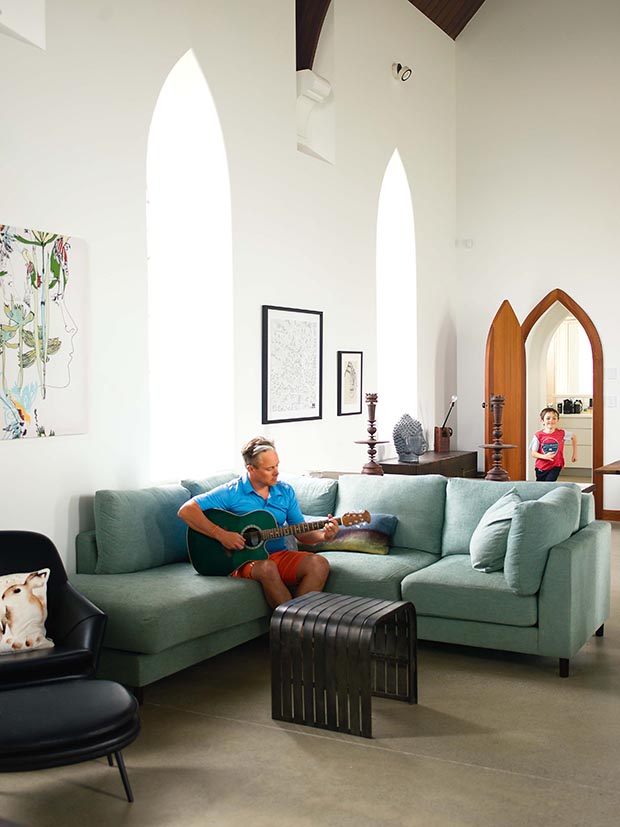 Some of their favourite furniture (from districteight.com in Vietnam) includes the dining tables, many of the side tables, kitchen chairs, master bed and a wooden sofa.

The church is now a three-bedroom lakeside home, with masses of living space with neither a hint of inside/outside flow nor a single lake view through the mullioned windows high in the plastered walls. Still to come, in stage two of this project, is a four-bedroom-plus-living-room wing on a fine concrete blade spanning the rolling terrain between the church and the lake.

“Having a place to call home and being able to holiday in Cromwell has been a blessing. It was wonderful this past holiday to stay in one place, unpack, settle in and for the entire holiday truly relax… however, the downside was not seeing some family members,” says Kerry.

“Therefore once the new build occurs it will be wonderful to have the accommodation to invite them down to enjoy Central Otago as much as we do.”

Consent work for this stage two is underway now despite Brendon’s admission that he has “no idea of what the church restoration project has cost to date and no desire to know. In fact I have instructed my accountant not to add it up.” 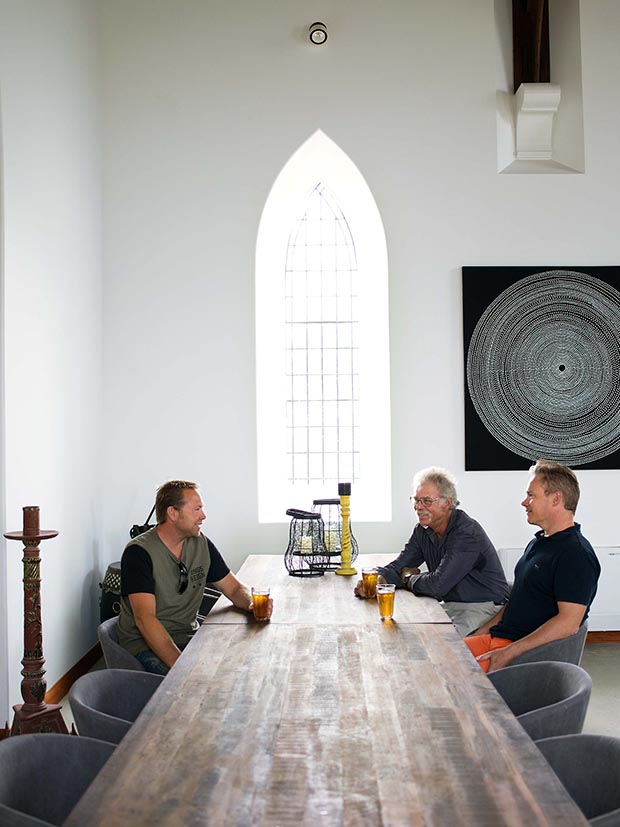 Nothing in this building was square or straight,” says Ant Robertson (left) of Lifestyle Construction, who is proud of what he and his men achieved. Verdun Burgess (next to Brendon), a specialist in making new look like old, says the church was built in a time of handcraft not machine-made.

The biggest challenge was in the strengthening work, which the Urlich family did voluntarily  to make it as safe as possible while still respecting the building. It involved lifting the rimu flooring joists and white birch floorboards and digging trenches inside each wall. Concrete and steel reinforcing rods were laid into the trenches and then attached to steel beams criss-crossing the interior walls. The roof was lifted off to allow the steel beams to be fixed to the roof trusses.

An interior false wall was then created, 20 centimetres thick, to hide the insulation and supporting steel. The new plasterboard was also made to look old, resembling a stone finish.

The interior fit-out – as a three bedroom, two-bathroom home with all mod-cons including underfloor heating – then happened at quite
a pace.

Brendon says the project had originally limped along for nearly a decade before he said to himself, “You run large multinational companies and you’d never allow a project to dribble along like this.” He then began working with Ant Robertson of Lifestyle Construction, whose team took to the project with enthusiasm. Brendon laughs now while admitting that he and Kerry often wondered if they’d gone mad.

“Almost every intervention, even the Historic Places Trust controls, for which we are grateful in terms of preserving the building, turned out to be useful in the end.“

However, sometimes the constant stream of invoices heading to Vietnam got a bit much even for Brendon. He once emailed Ant after receiving another batch asking, “Will this ever end?” “Dunno,” came the typically brief Central Otago reply.

The stone church is available for short-term holiday rental via Bachcare, bachcare.co.nz (search for “the Stone Temple”).