As a champion of the health and happiness benefits of rich, rotting compost, nothing makes Ben Elms more content than the multitude of microscopic critters squirming in his soil.

Although the ley lines along which Ben Elms and Robyn Bardas travelled to meet, and settle together, arose a great distance apart, they did so in common ground.

The intersection of those lines lies in the deeply mulched soil of a 20ha farm near Lake Hawea – home to Ben, Robyn, their daughter Leilana (17) and son Kanuka (11), one huntaway, a herd of milking goats, a few feral Arapawa self-shedding sheep, thousands of honey bees, dozens of hens and five whispered horses who’ve not known the sting of the bit in their mouths nor the bite of a saddle tree upon their backs. 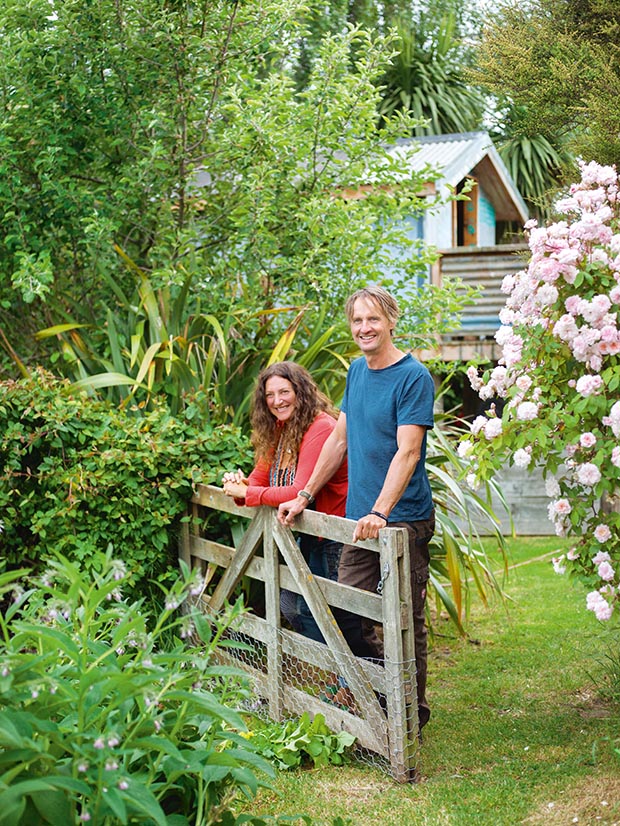 Ben, known as (the self-explanatory) Dr Compost, and Robyn, a full-time artist, were each lured to the Queenstown Lakes District 20 years ago by its reputation as a winter playground: Ben from Woking, near London, and Robyn from Melbourne.

“Even in England we knew of that mythical place called Queenstown, where everybody wanted to go to snowboard,” says Ben who graduated from university and set off to meet his NZ-based uncle and cousins in Auckland before hitching wherever his thumb took him… dolphin swimming in the Marlborough Sounds, catching crayfish on the Kaikoura coast… but generally meandering south in answer to the call of the snowfields. The couple’s version of the good life includes rabbit-proof fences around their organic veggie garden, goats for milking and on hand for 11-year-old son Kanuka to cuddle – “he’s great at amusing himself” – bee keeping for “buckets of honey; the bees never stop giving”, an orchard of stonefruit and berries, not to mention several apple trees, a recycled hut built from old tin and secondhand doors and windows (tucked in a private area of the garden where you can enjoy “the best sleep”) and an enduring love of traditional tools including an unusual Japanese hoe.

His final ride deposited him in Wanaka where he spent his last dollars buying a snowboard and a season’s ski-field pass intending to head home to the UK once the snow had melted.

Then he met Robyn at a famous Wanaka party house known as Gracelands. Robyn had arrived in Wanaka for a week’s heli-skiing, on time-out from a busy working life as owner of her environmentally aware house-construction company for which she was also the designer and general manager. 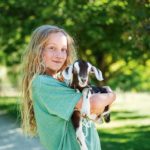 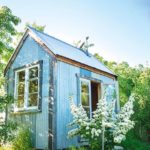 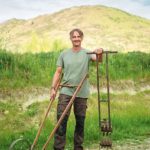 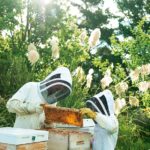 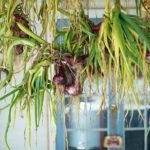 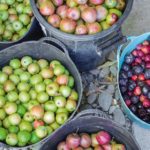 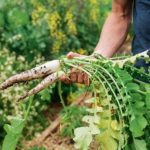 When she met Ben, she says it was a head-over-heels falling-in-love affair, not a gradual thing for which Ben takes all the credit.

“It was my bread. I courted her with freshly baked bread.” To pay for his snowboarding, he worked sole-charge at a bakery from 4am daily making loaves, Danishes and fancy pastries. 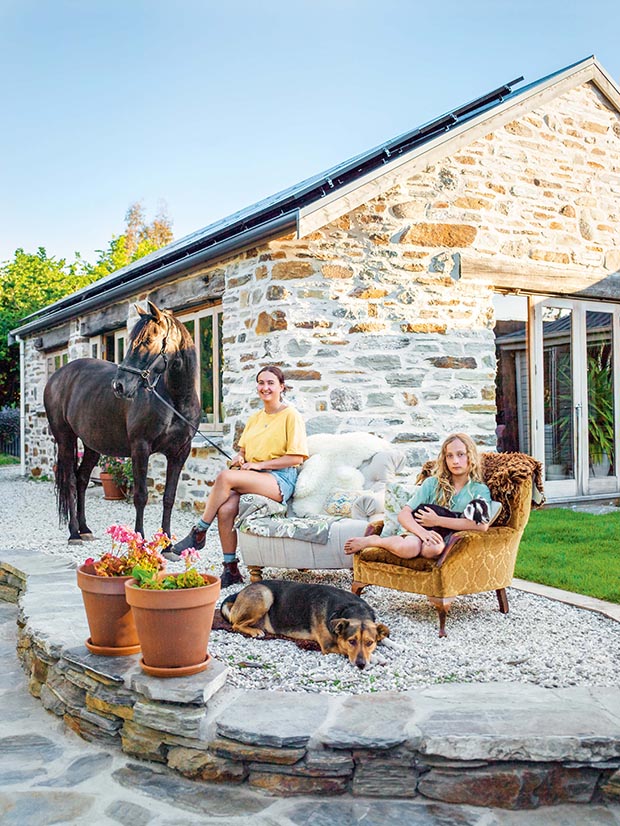 “The owner was really impressed when I pulled out a notebook and wrote down everything he said. Word-for-word. It was because I didn’t have a clue how to make bread, or anything about yeast and dough. He thought I was very diligent – I was just very ignorant. But I learned.

“I made Robyn fresh bread and we ate it with slabs of butter and Vegemite… how could any woman refuse a man who bakes her bread? It’s the way to a good woman’s heart.” The open-plan dining hall was inspired by one in a stone shed on a friend’s station in the Australian Outback: “We wanted it to feel like the original building on the property, and used local stone quarries and stones from the paddock,” explains Robyn.

Food is still the way to the heart, says Ben, but best if it is homegrown, organic and just-picked. It was his first taste of an organic carrot, a light-bulb moment of, “Oh my God, that tastes like no other carrot I’ve ever eaten”, that switched on Ben’s interest in organic gardening. However, that’s not the half of it.

More stories you might like:
Andrea Bosshard talks about filming her father Kobi Bosshard for the new documentary Kobi a Life Work

His belief (and now his career) is that not only can good food woo a good woman and be delicious, but getting into the soil is physically very good for human health. “Humans have a primal need to till the soil. We’ve been doing it for more than 30,000 years so it is part of our DNA. An artist friend, Eion Shanks, built the walls; the other walls are cob, earth plastered onto carpet to bend around a curve. “The kitchen table is an old colonial desk of my Dad’s,” says Robyn while the drawings in the room are by her mum. The kete was made for Ben by Robyn and the daybed is designed with recycled bed legs from Wanaka Wastebusters, “our local treasure”. It’s well used for reading, napping or just musing.

Only in the last 200 years have we become disassociated from the land. We have developed a modern society, created new roles, new jobs, new ideas and a concept of what life is about… it is about careers. We think our life is fulfilled if we follow these steps. This construct is all quite recent.

“It’s a hard row to hoe,” says Ben, “trying to be different and removed from the concepts that hold society in place.” He likes to argue the advantages of such a path. “We are hunters and gatherers, and we’ve evolved into growing food. That’s how we have survived and developed as a species. Don’t get me wrong, I sit over that screen as much as anyone else, but if you want to be happy, put your hand in the dirt.”

He reasons that the relationship between humans and the microbes and bacteria found in the soil have yet to be studied. They hand-made curvy seating from remnant Hebel blocks donated by friends. “We made templates and sawed the shapes with the help of some builder friends.” Robyn pored over an old Julie Moir Messervy garden design book to research the “feelings” of the outdoor spaces.

“There is so much going on between us and what’s in the soil; we are only just scratching the surface of what will eventually be discovered about it all. We are covered in bacteria, and the food we eat contains microflora. Life is about good and bad biology – and that really fascinates me.”

Ben’s part in the microbiome revolution is as a superhero of the soil. As Dr Compost he teaches people how to garden and how to compost. In partnership with Wanaka Wastebusters (a community organization working towards zero waste) and Queenstown Lakes District Council, he runs courses which are often sell-outs. 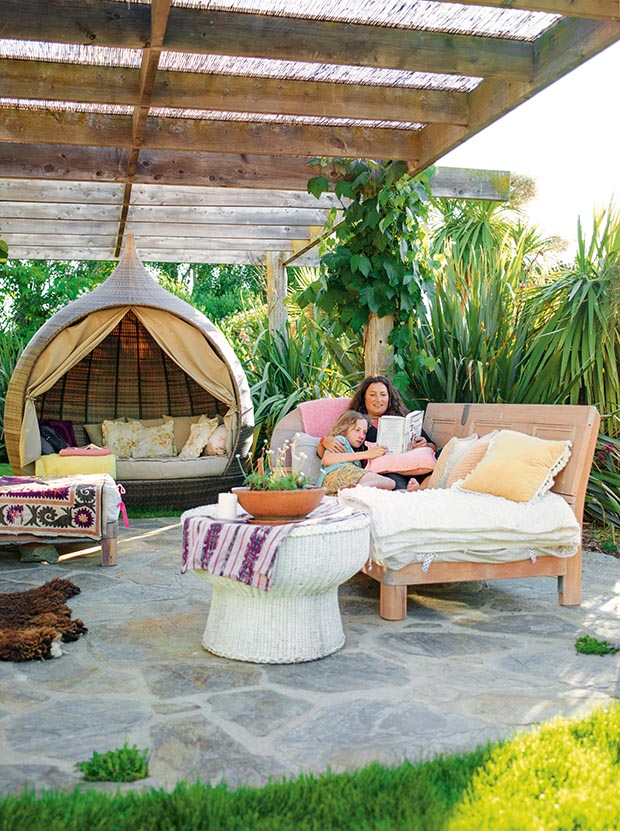 Since Ben and Robyn designed the pizza oven and seating area, the family wander outside for almost every meal. “Everyone wants the corner cuddle spot,” says Robyn.

This is in addition to the many publications he contributes to (including NZ Life & Leisure’s sister magazine NZ Lifestyle Block).

His career, which morphed from snowboarding to baking to mobile catering (Flying Trestles catered to film sets throughout the South Island), has always gone hand-in-hand with his passion for growing food. 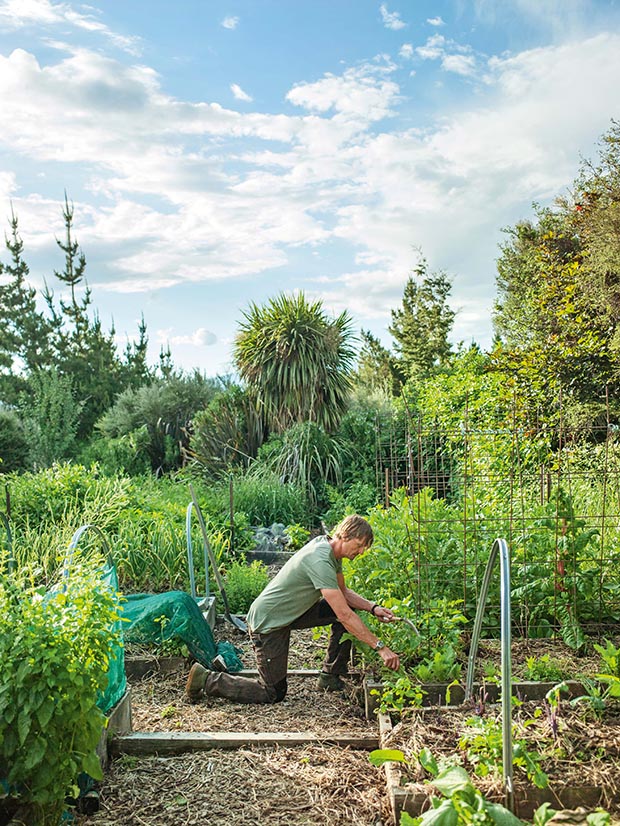 “I grew up watching The Good Life on telly and I wanted that life: Tom and Barbara, that was my dream, a life of self-sufficiency. I guess it wasn’t a common pursuit for a 20-year-old snowboarder.”

While Ben’s passion has evolved into his Dr Compost career, Robyn’s art has flourished in this fertile spot above scenic Lake Hawea. She had begun painting, and completed an undergraduate fine arts degree in Melbourne before she became involved in eco-construction. Kanuka and Mojo, the huntaway, beneath the cherry tree that the kids and their friends love to climb to chase off the birds that are plundering the fruit. “It has the most beautiful structure and colour in every season,” says Robyn, “and filters our view to Treble Cone from the kitchen.”

Then she met that English chap in Wanaka who baked her bread… and there were two children and a busy life as an artist, house renovating, gardening and horse whispering as well as further study. She returned to university to complete her master’s at Dunedin School of Art, which she did in 2016. She has been painting full-time and exhibiting since.

Robyn creates video footage then uses selected stills to paint over for her large, flowing works. At the end of 2017, she studied classical painting at the Florence Academy of Art – which she loved – and followed it up with a two-week course in New York in the art of classical oil portrait painting. 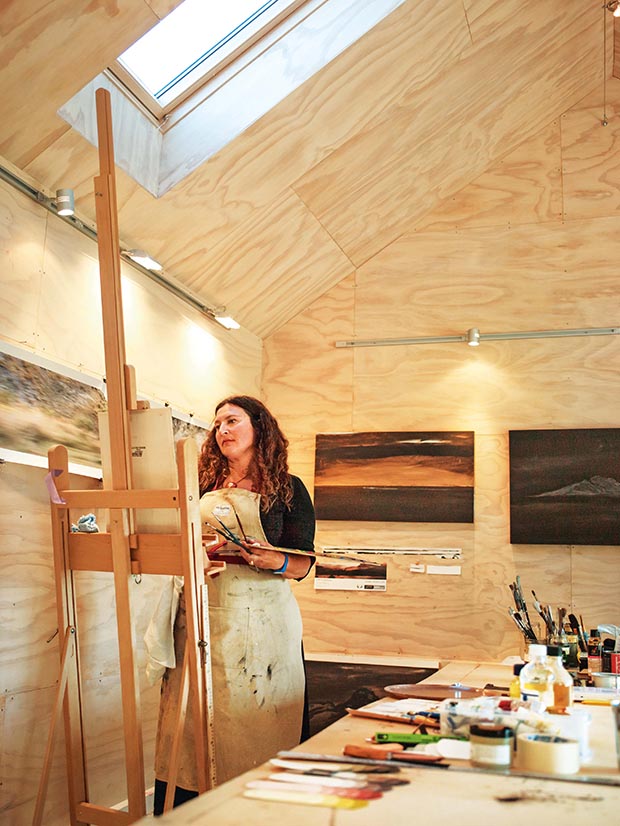 Robyn’s studio deep beyond the veggie garden is now a tranquil, dedicated workspace but the whole family lived in it while renovating the house.

She is poised, ready for the explosion of exhibitions she has coming across regional galleries throughout New Zealand.

Her inspiration found in the Otago landscape, her soul is sustained, and every now and then Ben still bakes her the bread that began it all. Like puppies tearing around a paddock, the horses come bounding up to to meet Robyn; they are at liberty to be expressive and choose to interact with humans. They include Blossom the palomino pony bred on the property.

RECIPE FOR THE GOOD LIFE
In Ben’s ideal world every single householder would:
✱ Grow some of their own veggies
✱ Compost all garden and food waste
✱ Capture rainwater and grey water for growing veggies
✱ Have only composting toilets – he believes using litres of water to wash away all those nutrients is a form of insanity
✱ Make compost teas to feed the soil using herbs and even weeds (comfrey, kale, fennel, lemon balm, poppies, thistles, docks)
✱ Disrupt the soil as little as possible to maintain beneficial soil structure
✱ Use the “chop and drop” method of cutting up weeds and spent vegetation and layering on top of the soil
✱ Consider private properties as part of a wider regional ecosystem and work with others to grow food in close communities saving food kilometres and minimizing energy waste