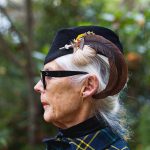 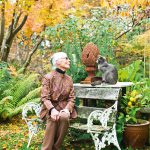 “I’m very interested in the things that make people strong. I was a widowed mother of two before I turned 50 (Andrew is now 52, Harriet 50) so I’ve been on my own for longer than I was married. I know how to survive.” These days, she shares her roof with a rowdy, attention-hungry cat called Pinot Gris. 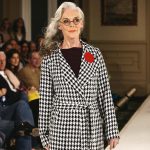 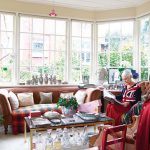 “The only way I communicate is face-to-face. I don’t have a computer – I giggle rather than Google. I don’t send text messages, and I don’t have email or Facebook. My life is busy enough without all of that.” 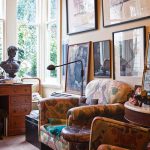 Art hangs everywhere in Barbara’s house. She’s pinned her favourite aphorism to the living room wall, lest we be in any doubt: “Ars longa, vita brevis.” (Art is long, life is short.)

Dunedin’s Barbara Brinsley is working on a life well spent.

In a city where winter tries to convince its residents that Michelin Man-style puffer jackets are the only sane fashion option (yes, you, Dunedin) 78-year-old Barbara Brinsley resists mightily. Vibrantly. Funkily.

She’s a little bit Iris Apfel-esque on it. If that name means nothing to you, do Google her: Iris is a sweet treat for the eyeballs – a New York nonagenarian who wears epic Mr Magoo-ish glasses and a riot of flamboyant clothes and jewellery. She’s also appeared in some Karen Walker ads. Barbara Brinsley is her Southern Hemisphere-style cousin, a woman who flies the flag for individuality-rich fashion and happy proof that moxie is excellently age-blind. Her Iris-kindred ways once saw Barbara selected to appear alongside two other fashion-sassy sorts in a newspaper article called, Ageing With Attitude (the trio modelled Iris’ MAC cosmetics range for the accompanying photos). She said then: “I don’t mind being near the edge of fashion. I don’t mind standing out in a crowd because I feel comfortable within myself as to how I look.”

Barbara has long cut a bright, oomphy dash on the more monotone Dunedin fashion-scape. In 2003 she and two stylish friends (Pamela Farry, now deceased, and Ruth Coghill) were spotted looking glamorous on one of their regular constitutionals along the city’s harbour edge and duly snapped up for modelling duties at iD Dunedin Fashion Week. 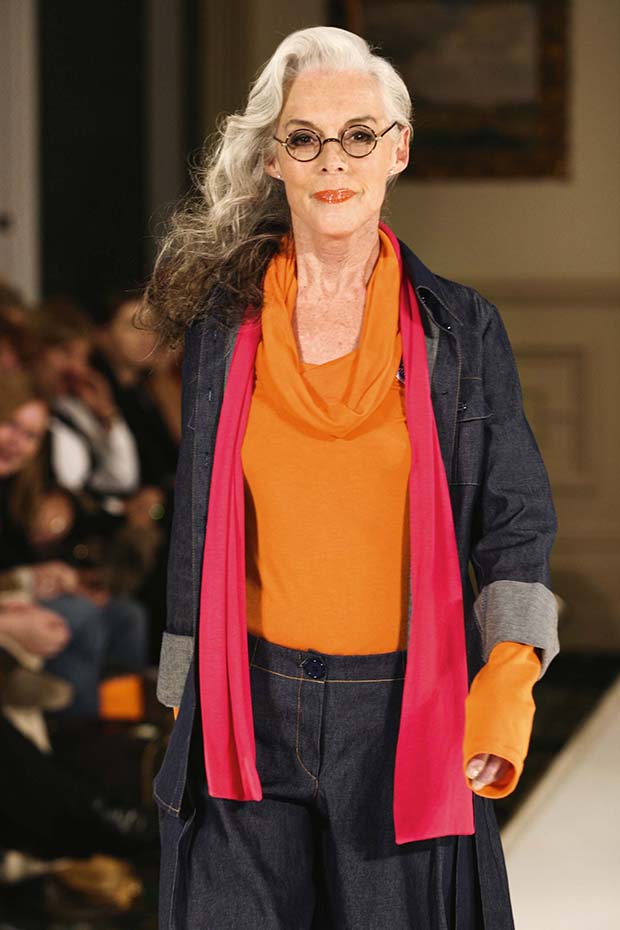 She was 65 years old when she strutted her stuff down the iD railway platform runway. Francis Hooper, fashion designer and co-owner of the WORLD label, was one of the judges that night. He was wowed by the trio and invited them to model for WORLD at New Zealand Fashion Week the same year.

“Barbara looked magnificent; she was our muse. She’s an incredibly fashion-forward woman, not to mention one of a handful of women who run Dunedin – she gets things done. She embodies the spirit of WORLD, a person of great personality and strong individuality. But most of all she is a great and kind woman. We love her.” 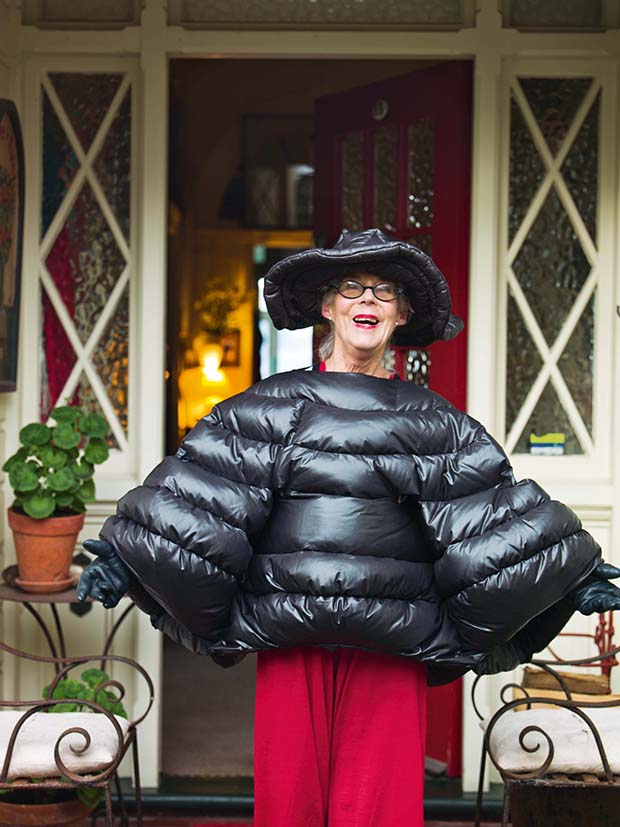 I’ll show you a puffer jacket,” says Barbara, fetching a Comme des Garçons version. “I look like a giant muffin in it.”

Barbara was subsequently picked up by two modeling agencies, Dunedin’s Ali McD and Queenstown’s Ican Agency, and has since been a bit of a poster child for grey gorgeousness (her locks silvered in her late 40s after her husband, Michael, died). She doesn’t take this modelling lark too seriously though – her impishness sees to that. When she appeared at the recent Darnell Fashion Show (for the Otago Community Hospice) she spied a pole at the end of the runway that she felt like swinging around.

“I couldn’t resist. I shot around it and people thought I was doing pole dancing. My feet didn’t leave the ground though…” While the Brinsley wardrobe is a-bulge with edgy, high-end design labels like Issey Miyake, Alexander McQueen, Yohji Yamamoto and Vivienne Westwood, Barbara’s attitude to her appearance is decidedly unfussy. Of grooming, she says: “I don’t get my hair cut. If I see it’s a bit uneven I get out my dressmaking scissors and chomp.” 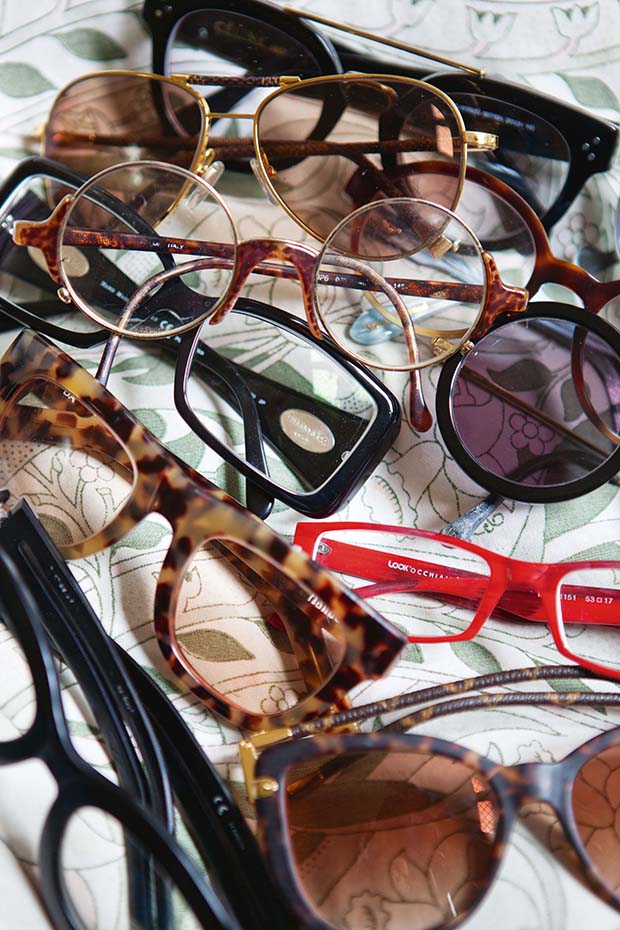 Barbara’s prescription hasn’t changed since she was 16, so her collection of glasses is vast: “I have enough to fill up a museum”

Her priorities are sound: “I’d rather go and buy one good hardback every month than get my hair done.” And, were her wardrobe on fire, she wouldn’t dive for the Comme des Garçons or the Gaultier: “I’d be grabbing a hat and warm woollen stockings. I wouldn’t be looking for the chiffon – I’d be interested in keeping warm.”

Necessary fashion choices for a Dunedin-ite, those, but much of Barbara’s practicality owes to her farm upbringing (in Waianiwa, Southland) and her half century of nursing, the bulk of which saw her working in postoperative recovery at Dunedin Hospital. Of that career she says: “I loved it. I’d do it again. People are surprised to hear I was a nurse – they can’t imagine me getting grubby. I loved getting grubby.” 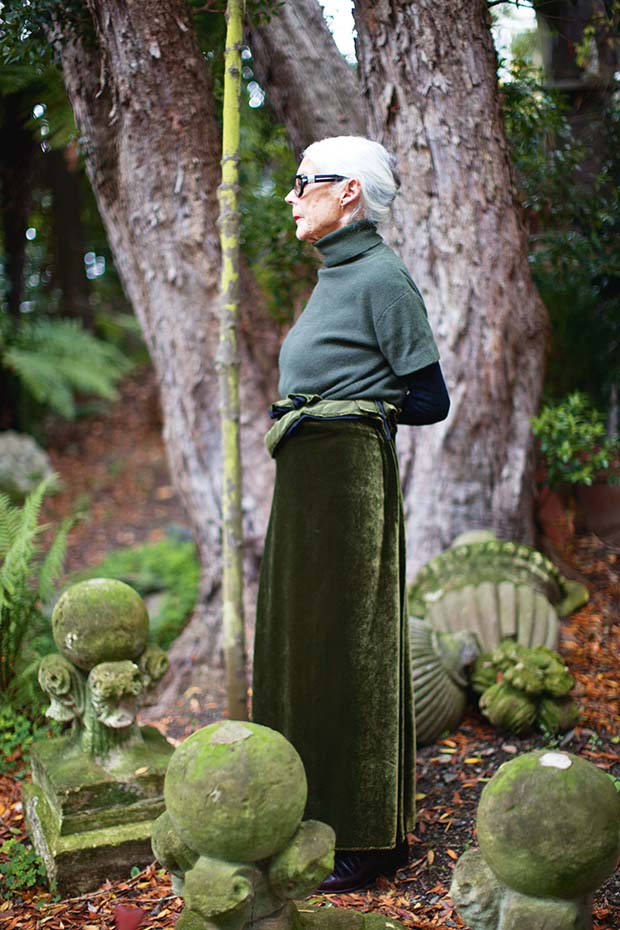 It was the perfect career for someone so upbeat and curious. “If someone came in with a dog bite, I’d want to know what sort of dog it was. If it was a motorcycle accident I wanted to know what sort of motorbike it was. Was it a BMW or Ducati? My colleagues would stand back and say, ‘There’s Barbara asking all those questions again.’ In a split second I would know so much, which was quite unnecessary really, but I just needed to know.”

I’m terribly naughty. People say, ‘Have you been good Barbara?’ And I say, ‘Definitely not. Don’t be ridiculous’

When Barbara retired from nursing at Dunedin Hospital in 2003, she swapped her scrubs for a badge that reads, “aesthetic coordinator”. Having long been an avid art collector (the walls of her villa fair heave with art treasures), she joined the hospital’s art advisory committee and spends much time nursing its valuable art collection and facilitating its display.
“People at the hospital don’t understand aesthetics – some of my correspondence goes to the anaesthetic department. My job is to improve the atmosphere of a place that has a lot of sadness and sickness. It certainly does lift the patients’ morale when they can get out of bed and look at what’s on the walls. It can be the difference between someone feeling well and unwell.” 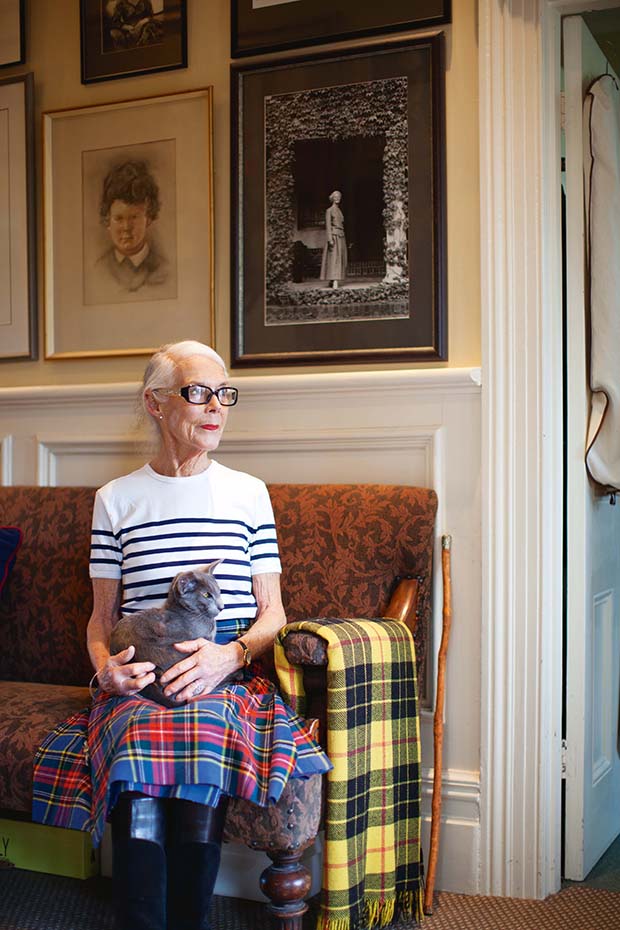 Orthopaedic surgeon professor Jean-Claude Theis concurs: “Having art on the walls hides the shabbiness and rundown appearance of our ageing hospital and brings some colour and interest to the otherwise clinical appearance of the wards and patient areas. Barbara looks after Dunedin Hospital’s art collection with enthusiasm. She’s a real dynamo and such a wonderful person.”

Not everyone is as appreciative of Barbara’s arty efforts. “Some members of staff say they don’t like the artwork and ask me to take it down. And I say, ‘no, not today’. I stuck laminated copies of that famous quote, ‘Art should comfort the disturbed and disturb the comfortable’ onto noticeboards around the hospital. They were soon removed.” 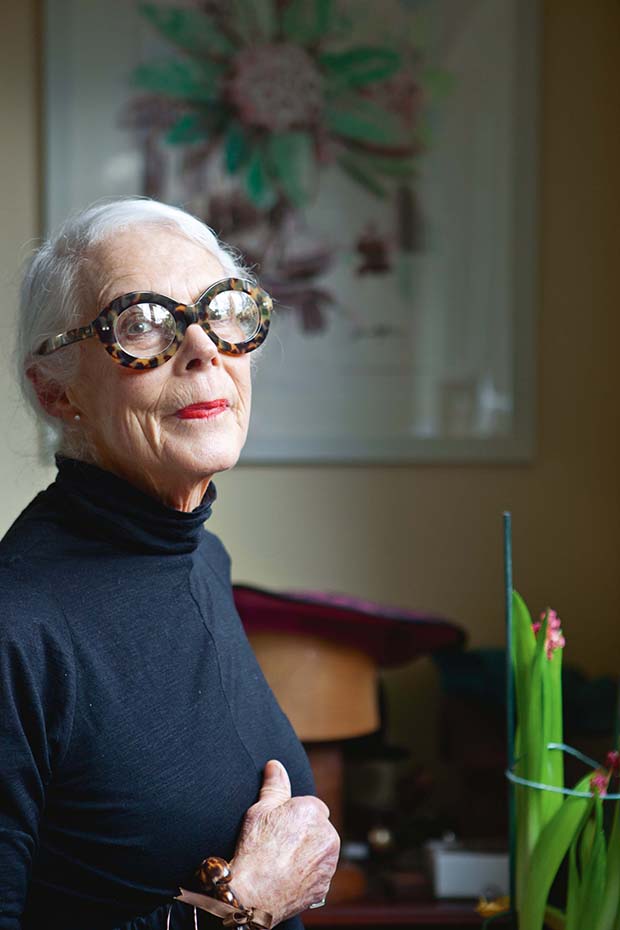 She’s a tireless art agitator in the medical midst. She lobbied hospital management to remove vending machines positioned claustrophobically close to an art print; she rescued a lost Doris Lusk painting from behind a hospital filing cabinet; she was shocked to learn that someone had polished the distinctive oxidized patina off a copper John Middleditch sculpture; she occasionally has to request that works hung upside-down be upsideupped; and she regularly chases the hospital’s helpful building and property team to get them to install donated artworks (which they do a lot more
cheerfully when she brings them a wedge of Countdown carrot cake).

More stories you might like:
How artist Ema Frost followed her instincts to pursue a career in contemporary pop art

Two years shy of 80, this rare bird shows no signs of slowing yet. She says the doctors can’t find anything wrong with her. The only time she was hospitalized was due to a fashion accident: she tripped over a shoebox in her bedroom and dislocated her shoulder. Importantly, she wore her vibrant Royal Stuart tartan dressing gown to hospital. Barbara’s prescription for a good life: “There needs to be balance, culturally and physically. I read lots of books, I go and see great films and I love gardening – that mix is so important to me.” She lives more firmly inside the now of time than most, and her native social verve keeps youth in her corner – that, and a pronounced weakness for mischief.
“I’m terribly naughty. People say, ‘Have you been good Barbara?’ And I say, ‘Definitely not. Don’t be ridiculous.’ I laugh a lot – that adds to my youthfulness and how I feel because laughing is the very best medicine you can have.” “I feel style is inherent really – one either has it or one hasn’t. As for beauty – it’s inner beauty that one has, and it comes out on the outside if it’s there. I certainly don’t spend much  time at all on putting myself together each day, and I don’t go out of my way to stand out – it’s just completely instinctive and natural, the way I end up. I think part of what you see in my dress comes from within – the feeling of how good it is to be alive. One of my favourite sayings is carpe diem – seize the moment, seize the day. It’s the quality I see in my life that goes into what I wear too.”
BARBARA ON KILTS 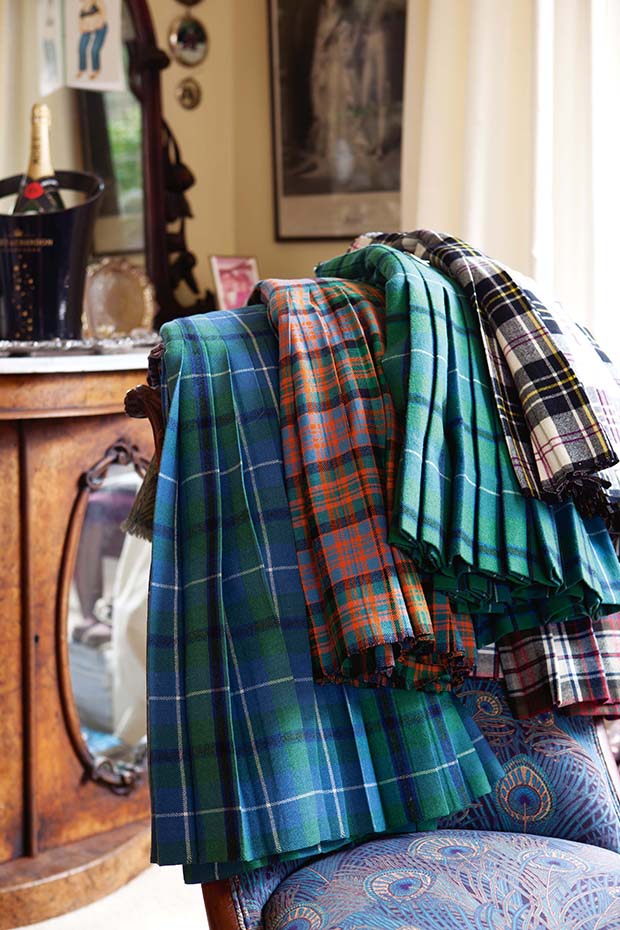 A smidgen of that kilt pile.

I have too many kilts to count – sufficient to dress at least one pipe band, I should think,” says Barbara about her love for tartan. “I have a pile of them (at least a foot-high) in my front room. Some are Jean Paul Gaultier or Comme des Garçons; others are from second-hand shops.” She thinks it’s to do with her strong Scottish heritage (her clan is Macpherson). “I also love the sway of the kilt. And then there’s the vibrancy and variety of the tartans. If I buy a kilt I have to identify the tartan so that I can answer all the questions I get about what I’m wearing. I run in to The Scottish Shop and the women there pin the clan name in my waistband and off I go. “Kilts are so frightfully functional and when you have a lissome frame like me, they are good practical insulation – especially when you don’t have much bottom. Because I was brought up on a sheep farm, I have that ingrained love of wool. I’m so grateful for my heritage: I know where I came from; I know where my gumboots and spade are.”