England on foot: A writer stumbles upon ancient pubs and Yorkshire pudding on the 308-km Coast to Coast walk 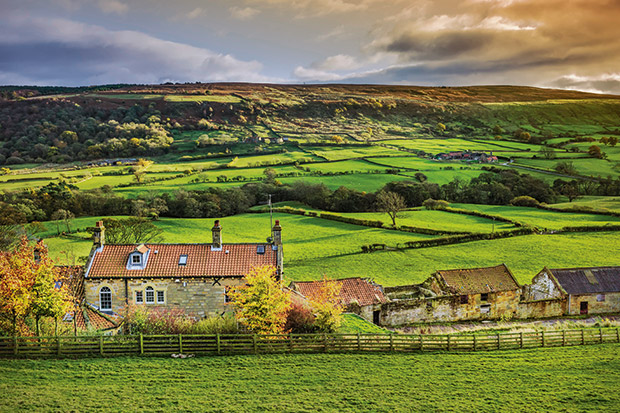 A traditional stone farmhouse set in the heart of the North York Moors in Glaisdale, Yorkshire. This shot was taken on a fine evening in autumn.

Long walks are a much-favoured tour du jour for energetic travelers the world over. One of England’s oldest such walks, first officially described in 1973, crosses the country from coast to coast.

There are easy ways to get from one side of England to the other, such as traveling three hours by car or slightly longer in a bus or train. More challenging would be the day-long ride required to cover the 308-kilometre distance on a bike. So why did I spend 14 days walking it?

Twelve months previously, three old high school friends and I discussed the concept of a long walk. How on trend, I thought, as I imagined becoming part of the growing number of women of a certain age striking out to seek adventure.

Would it be the sun-drenched El Camino, or the heritage paths of Japan? When they decided on the Coast to Coast in England, I had to YouTube it; I had never heard of it. I had visited England 30 years ago on my OE and recalled rain-soaked, bleak days and B&Bs still waiting for The Hotel Inspector to pop in and save them. I prepared for the worst. Even the original promoter of the walk, Alfred Wainwright, who extolled the virtues of this trail in his now-classic 1973 book, A Coast to Coast Walk, advised travelers to go west to east to keep the prevailing wind and rain at one’s back and the evening sun (should they be so lucky) out of the eyes.

He wasn’t talking it up. Yet the walk traverses some of the most spectacular scenery in England, and the thought of windswept moors and striding through waist-high wildflowers ignited a passion I never knew I had.

The recommended west-to-east crossing starts at the ancient Cumbrian village of St Bees, named for the beautiful Irish princess, Bega, who fled to England to avoid marriage to a Viking prince. 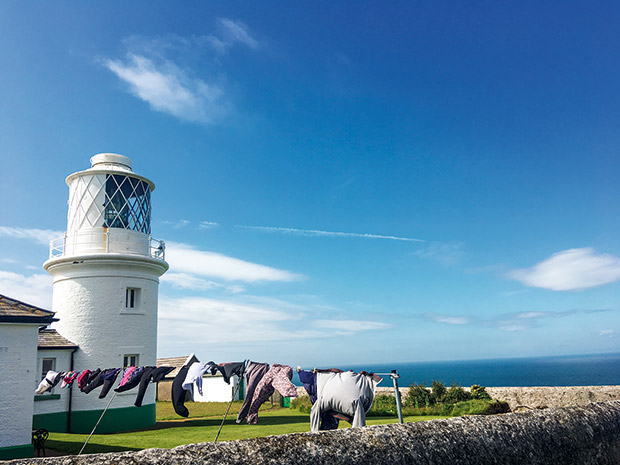 As folklore has it, she struck a deal with a local lord to acquire all the land upon which snow fell on Midsummer’s Day. Miraculously, snow came, and Bega made the place her home.

Mile Zero (no kilometre measurements here) requires a traditional dipping of the feet in the Irish Sea and the pocketing of a pebble from the beach before ascending a cliff path along the Cumbrian coast. Ahead lay three National Parks (Lake District, the Yorkshire Dales and North York Moors) and what we would discover to be idyllic and unspoiled villages and pathways that might not be among today’s most popular but which have been trodden for centuries.

Ahead of us, too, was a whole new lexicon, including words such as fells, kissing gates, dales, butts and tarns. We became fluent in English walking-trail lingo as we hiked through the ruins of lead mines dating to the industrial revolution and heard gunshots from grouse-hunters echoing in the valleys around us. 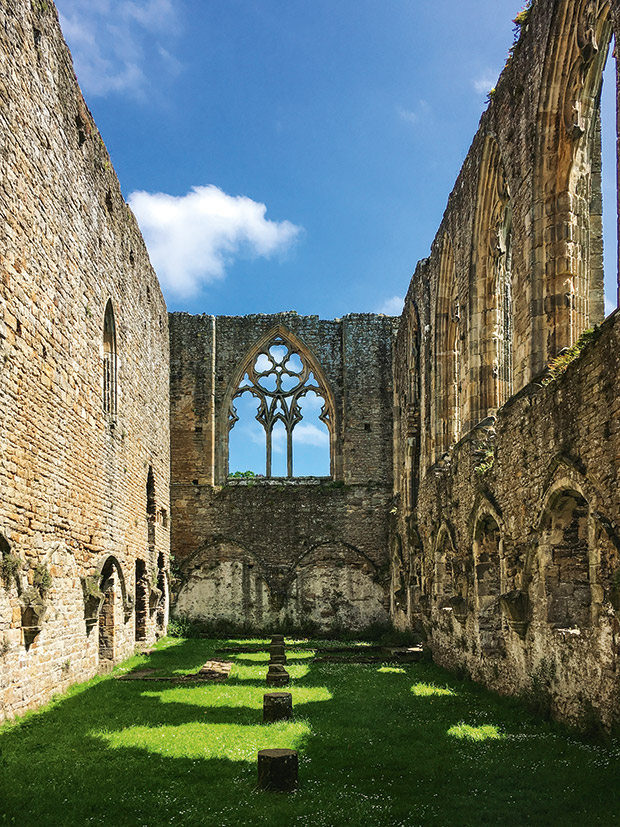 The ruins of Easby Abbey on the banks of the River Swale near Richmond, North Yorkshire.

Abbeys built a thousand years ago transported us back even further in time. Clambering over dry-stone walls, through meadows of buttercups into dappled woodlands and past a cottage draped in roses took us into a storybook world — then we discovered that the rose-covered cottage was to be our home for the night.

Within days, we discovered the pleasure of these solitary landscapes, and overcoming physical obstacles with the stimulation of a new environment brought an immense sense of wellbeing. Most days ended with a weary descent between hedgerows into a village tucked into a valley. Buttermere, Borrowdale, Patterdale, Bampton, Danby Wiske; the villages looked as enchanting as they sounded.

For an average of forty pounds each a night (twin-share), our rooms ranged from an attic in a 500-year-old pub to bedrooms in a gracious manse, several farmhouses and mill houses, and even stately lodges. A rare marker on the route — day one and seven miles down by lunchtime.

Comfortable beds, bathroom en suites, hearty breakfasts consisting of several courses, and packed lunches at-the-ready were the rule. The reward for each long day’s walk was a substantial pub meal washed down with a local ale or cider. At approximately 10 pounds for a dinner-plate-sized steak and ale pie, yorkshire pudding filled with mashed potato and sausages, or good old cod and chips, no weight was lost but none gained either.

We chose to take a rest day and spent two nights at the largest town on the trail, Richmond. It was a good opportunity to enjoy the architecturally rich market town, which sits, overlooked by a castle, alongside the River Swale. The deliciousness of the fresh salmon in the kedgeree we had for breakfast there elevated the meal to restaurant quality. Crossing fields of buttercups on the way out of Bampton Grange.

The northern part of England has retained much of its original history and environment and, in late June to early July, the cottages and pubs all featured window boxes, pretty gardens and hanging baskets bursting with flowers. Is it obligatory for doors in this part of the world to be framed with climbing roses?

Even better, we struck almost perfect weather, spending only one day crossing the Pennines in damp conditions. Long summer days with no wind showcased the countryside at its best.

Even in all this bucolic loveliness, there is a fitness requirement. It’s a tough trek in one go. The reality of walking between 20 and 37 kilometres a day, day after day, can be challenging. The fells of the Lake District are rocky and steep and, at the highest point – the Pennines – we were shrouded in wet, low cloud, so negotiating peat bogs was slow and treacherous. 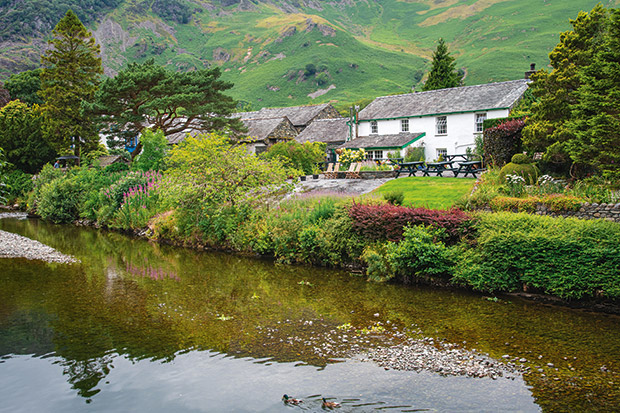 A chocolate-box scene in the village of Borrowdale in the Lake District.

A couple from Montana with us that day put a foot wrong and were plunged up to their thighs in freezing water. Peat bogs are quite an experience. What looks like solid ground is an illusion and a foot can immediately sink into a void, sucking the boot off. This is where walking poles were invaluable in testing the ground ahead.

An unexpected aspect of the trip, along with the outstanding beauty of the landscape and villages, was the camaraderie of other walkers. The Coast to Coast is not a crowded trail and it is possible to walk alone for hours, but we enjoyed the bond that came with the walkers we met each day. A traditional Cumbrian pub in the small village of Ennerdale Bridge.

Hazel, a Cambridge University earth sciences professor, knew every rock and wildflower, was an international orienteering champion and a welcome sight when we wondered if we were still on course.

More stories you might like:
A whimsical wander through Albert Park prompts this photographer to ponder amongst the trees

Then there were the six Aussies, with whom we developed a fierce but friendly rivalry; an American couple who loved the C2C so much they were doing it for the second time; the English ramblers with their beloved dogs who were doing the trail in short chunks. 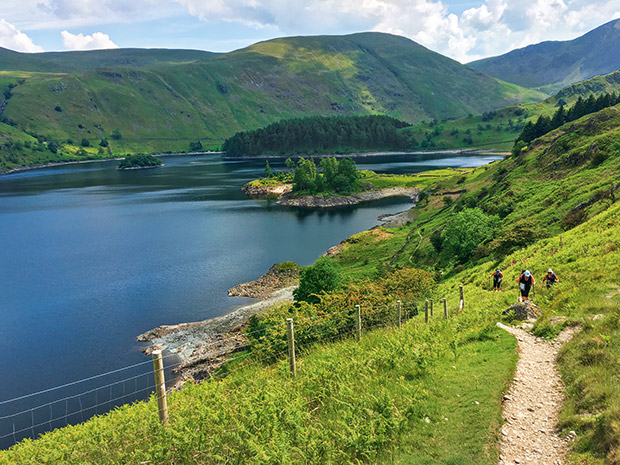 Tranquil Haweswater, the highest lake in the Lake District, and a tiring trek on a hot day.

A debrief at the pub each night with fellow walkers usually started with the same statement, “Today was the hardest day. It gets easier from here.” If there were Tui billboards in Britain, this would be on it.

It was a bittersweet feeling on the final day as we walked down the steep streets of Robin Hood’s Bay, a fishing village frequented by smugglers over the centuries, to the water’s edge. Our journey was at an end. We dipped our feet in the sea and threw the pebble we had carried from the Irish Sea shore (and that we had kept for more than a fortnight) into the waves. We had done it. We turned left and there were the Aussies — already in the pub celebrating.

When to go: Mid-June to mid-July provided beautiful early-summer weather, before the heatwaves and school-holiday crowds descended. This part of England is notoriously damp and we escaped that. The official walking season begins at Easter and ends by October.

What to carry: We each walked with a day pack, having wisely secured the services of the C2C Packhorse Company to transport our main bags to the B&Bs we had booked in advance. A similar Sherpa company, Sherpavan, can also do accommodation bookings, but this is not necessary. Although it is more work, booking oneself provides more flexibility. Knowing that we had pre-booked in a different village each night meant we had to keep walking. The walking guide, Coast to Coast Path: St Bees to Robin Hood’s Bay, provides detailed gear lists. Walking poles and merino are at the top of mine.

Navigation: Coast to Coast Path contains detailed ink sketches and information, but navigation can be a challenge. We had a GPS app (Pocket Earth, but there are many) as a back-up, but walking the original path devised by Alfred Wainwright in 1973 with a retro map is the authentic route. There is no marked path as such, little signage (none in the Lake District) and few landmarks, so traversing fields looking for subtle signs such as bent grass, or an overgrown stile requires vigilance.