Everything you need to know about livestock shots 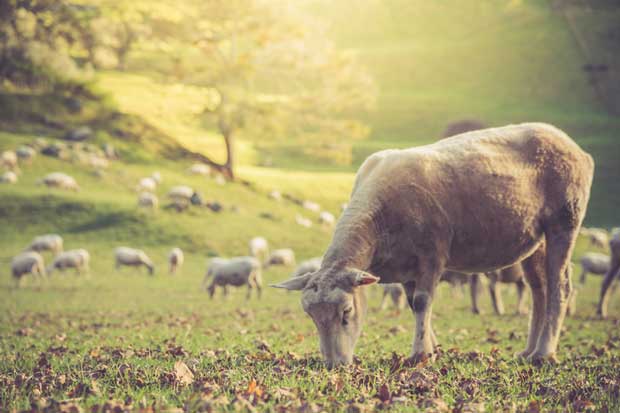 If you’ve never vaccinated your livestock before and not lost any, you’ve been lucky. Vaccination is an easy, cheap and important way of keeping your livestock healthy, and alive.

One of the worst feelings in the world is seeing an animal suffering and not knowing why. Worse is finding out you could have spared them that suffering.

On a fine spring morning it was Ethel in trouble, a nine year old Sannen-Boer goat that I had adopted from a distant neighbour’s herd, along with two of her mates.
Ethel had developed what is known as a ‘strawberry’, a very red-looking sore in one hoof, despite trimming, soaking in zinc sulphate crystals and water, and ongoing treatment with antibioitics.

I arrived home to find her lying down and even from a distance I could see something was wrong. When I got up close I realised she was in the midst of a seizure, something that’s quite horrendous to watch. When it finished, she was struggling to breathe so I propped her up on my knees and tried to make her comfortable while I rang the vet.

Whatever was wrong, it was very distressing for her: she was foaming from her mouth, her front and back legs were stiff (she looked like a rocking horse, except she was lying down) and when the seizure stopped her head kept turning around to the side, as if she had no control over it. My other observation was jaw was locked shut the whole time, even though she was struggling to breathe.

It took 45 minutes for the vet to arrive, and after noting my observations and making his own, he concluded that the most likely cause of her illness was tetanus, possibly brought on by the infection in her hoof. While it was possible it was something else, tetanus was the most likely diagnosis, and even if it was something else, she was past the point of treatment. He put her down immediately.

This will sound terrifically ignorant, but at the time, I’d never met anyone who vaccinated their adult goats. I knew calves, lambs and kids got a series of vaccinations when young but had no idea that adults should get booster shots, probably because almost all of the animals we had when we were growing up were eaten or sold before the time came for the booster shot.

My vet told me horses are very susceptible to tetanus and should get a double shot as youngsters, a follow-up at a year old, then a booster shot at least very five years, but yearly is better.

All animals need a vaccination schedule and for it to work, it’s going to rely on you keeping an accurate record of livestock and when they were vaccinated or given a booster.

5 IN 1
For: cattle, sheep, goats, deer, alpaca, horses
Protection from: clostridial bacteria diseases (pulpy kidney disease, tetanus, black disease, malignant oedema and blackleg)
Why: clostridial bacterias are all around and spores can remain in the soil for years. They can then be ingested by a young animal, eventually lodging in a muscle and can stay dormant for years before becoming infected, often after a trauma. Vaccination is cheap and an easy preventative.
When to administer: young livestock aged 6-12 weeks, will depend on the product being used, check with your vet; adults need a yearly booster shot
Booster shot: a second shot needs to be administered 4-6 weeks after the first shot for the vaccination to be effective. Yearly booster vaccinations (one injection) are required to keep up protection on an annual basis.
Things to take note of
• 5in1 only gives six monthly protection to camelids so a booster shot must be given every six months instead of yearly.
• Glanvac 6in1 is for sheep, lambs, goats and kids and protects them against the five clostridials, plus caseous lymphadenitis (CLA/cheesy gland), can be used from four weeks of age and requires a booster 4-6 weeks later. Sheep need an annual booster but goats require a six monthly booster shot to protect against enterotoxaemia/pulpy kidney.
• 7in1 protects cattle from the same clostridials as 5in1, but also protects against leptospirosis (L. hardjo and L. pomona), can be used from four weeks of age, requires a booster 4-6 weeks later.
• 10in1 is a vaccine for sheep and cattle to protect against Clostridium perfringens types A, B, C, and D, C. chauvoei, C. novyi, C. septicum, C. tetani, C. sordellii, and C. haemolyticum.
In all cases, speak to your vet about what is the best option for your livestock; if you have a death from unknown causes, your vet can perform a basic autopsy on site or you can pay for one to be performed by a professional laboratory – sometimes the cause of death of an animal may be surprising, and will help you to prevent future deaths in your herd/flock.

For: horses (for all other livestock, see under 5in1)
Why: Horses are the most susceptible of all livestock to tetanus – 80% of horses that contract tetanus will die – and require their own special prescription vaccination for it.
When to administer: 12 weeks of age and over
Booster shot: 4-6 weeks later, then 6-12 months later, then at least once every five years, although a yearly booster offers the best protection.
Things to take note of
• Other diseases to consider vaccinating your horse against include strangles, equine herpes virus (EHV-4) and salmonella.

LEPTOSPIROSIS (‘LEPTO’)
For: cattle, deer
Protection from: Leptospirosis bacteria spread through urine and placenta material
Why: can cause abortion, weak or stillborn calves, sudden milk drop, mastitis, blood in urine, anaemia, jaundice, and can be caught by humans; as there is no vaccination for humans, vaccinating cattle protects them and you.
When to administer: aged 12 weeks plus
Booster shot: 4-6 weeks later, then a yearly booster shot (one injection)

BOVINE VIRAL DIARRHOEA (BVD)
For: Bulls
Why: BVD is typically spread by carrier bulls, and is especially dangerous to a gestating calf because it can cause abortion, still birth or the birth of a persistently infected calf (PI).
When to administer: at least six weeks prior to mating
Booster shot: 3-4 weeks later, annual booster is then required, again prior to mating.
Things to take note of
• All bulls that will be used for breeding should have a blood test to confirm their BVD status. Bulls testing negative can then be vaccinated to protect them from picking up BVD from an infected cow and passing it on.
• All heifers should be vaccinated so they can’t pick it up from nose-to-nose contact with carriers (ie your next door neighbour’s cow) or at a show, and they won’t pick it up while pregnant and won’t abort or give birth to a PI calf.
• Bulls testing positive should be culled.
• While some animals will get ill and then recover from BVD (called transiently infected or TI) others will be PI (persistently infected) and continually shed the highly contagious virus from all secretions including faeces, urine, saliva and milk throughout their lives, spreading and perpetuating BVD in a herd.
• You can opt for a BVD vaccine that is combined with one for Infectious Bovine Rhinotracheitis (IBR), a virus that mostly affects heifers in summer.

CAMPYLOBACTER
For: sheep
Why: Campylobacter species are one of the most common agents in the cause of abortions in pregnant ewes and death in lambs just before birth.
When to administer: Prior to mating
Booster shot: 4-8 weeks later, with a booster shot prior to mating annually
Things to take note of
• Campyvax4® from Schering-Plough is the only vaccine to give protection from two strains of campylobacter (Campylobacter fetus fetus and C. jejuni.)

JOHNES
For: sheep and goats
Why: Johnes is a persistent bacterial infection caused by Mycobacterium avium paratuberculosis (MAP) that causes ill-thrift scouring and death in sheep and goats, with goats being particularly susceptible. The bacteria is spread via the faeces, which sheds spores.
When to administer: from 12 weeks onwards, single shot vaccination
Booster shot: not required
Things to take note of
• Gudair from Pfizer is the only vaccine against Johnes in sheep and goats and is 90% effective in preventing Johne’s deaths and faecal shedding.

More stories you might like:
4 plants in the New Zealand bush you can eat in a survival situation

WHY TUBERCULOSIS IS A SPECIAL CASE
Bovine TB is one of New Zealand’s most serious animal health problems, affecting domestic cattle and deer herds throughout the country.

However, you can’t vaccinate your cattle or deer against TB because as yet no vaccine has been developed that doesn’t end with the animal concerned becoming infected with TB.

That’s a problem because humans can become infected with TB through the consumption of milk or by handling infected animals or carcasses. This is why the Animal Health Board’s TBfree New Zealand programme is so important.
• Farmers and landowners running deer and/or cattle must have their herds registered with the Animal Health Board (AHB) – even if you only have one animal, it is considered your “herd” and you have the same responsibilities as someone who owns 1000 cattle.
• NZ is divided up into Movement Control Areas (MCAs). MCAs are legally defined areas where there is a greater than normal risk of TB infection from wild animals. Within these areas, farmers must comply with restrictions on the movement of their cattle or deer.
• Keep your herd details up-to-date and advise the AHB if you buy, sell or move your herd.
• If your herd is located in a Movement Control Area, or some of your herd has tested positive for TB, make sure you understand and comply with requirements for pre-movement tests before moving stock.

New TB vaccines are being developed and controlled trials will be taking place over the next 2-3 years, so it will be possible in future to vaccinate cattle and deer against TB.
www.tbfree.org.nz

TETANUS
For: lifestyle-block dwelling humans
Why: Tetanus is a bacteria found everywhere, particularly in soil and in the gut of animals. Anyone with a cut – even something as small as a prick from a rose – can contract tetanus if the wound gets dirty. The deeper and more dirty the cut, the more at risk you are.
When to administer: a tetanus vaccine is given at six weeks, three months and five months, with boosters at four years and 11 years, as part of a child’s normal vaccination regime administered by your doctor. Adult boosters are given at 45 and 65 years of age but talk to your doctor about getting a booster shot every 10 years at least, especially if you need medical attention for a cut.