What to do when your chicken suddenly dies 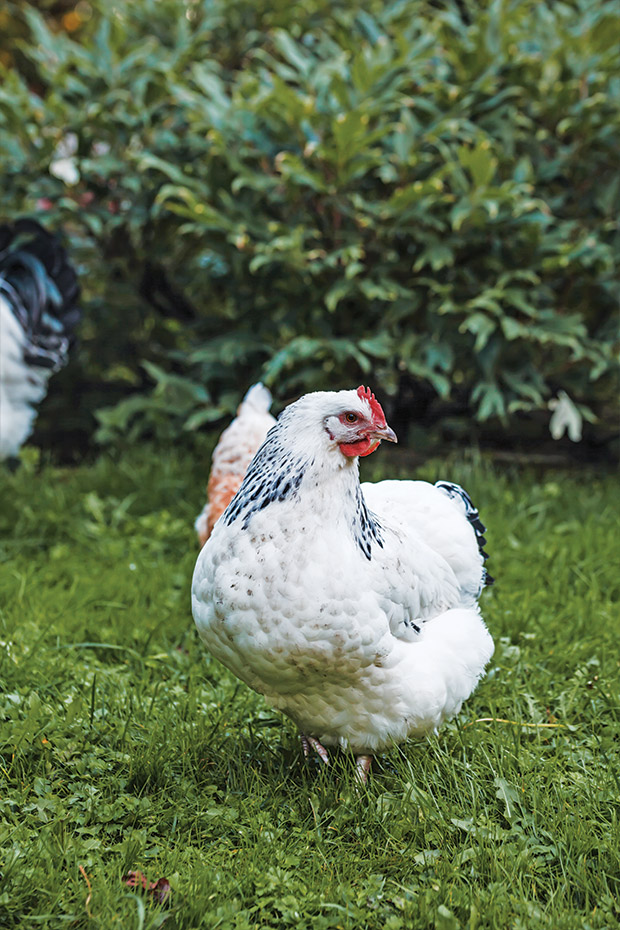 If you own poultry, at some point one of the flock may die, seemingly for no reason.

Signs of illness can be subtle and easy to miss. Some diseases can take hold very quickly. Whenever you’re looking for the cause of a sudden death, it’s important to remember an old saying used in medical training: when you hear hoofbeats, think horses, not zebras. A common ailment is more probable than something rare.

One good investigative option is a necropsy (the bird version of the human autopsy) by a vet, or you can give it a go. It’s worth considering, especially if you’ve had several birds affected in a short time. However, tests are often the only way to diagnose a disease. They can be expensive, and you need to know what to test for, eg antibodies for a specific virus.

How to perform a simple necropsy: Go to Youtube.com – search for ‘Performing a simple avian necropsy David Frame’, posted by Jacqui Jacob in February 2020.

How to investigate a sudden death

Shortlist the possible causes such as:
•the age of the bird/s;
•the environment;
•feeding programme and condition;
•access to toxins.

Other things to consider include contact with other birds, animals, pests, and any other reasons you can think of. Check the rest of the flock for any symptoms, and isolate any that look sick. Talk to an experienced poultry person to see if they can help.

Sudden death in a young chick is usually caused by something that happened before, during or 24 hours after incubation. Possibilities include:

•nutritional deficiencies in the mother hen’s diet;
•a disease transmitted from the hen to the egg, eg egg drop syndrome;
•a disease which has penetrated the shell after laying, eg aspergillus fungal spores;
•lack of proper ventilation (oxygen) in an incubator during hatching;
•internal malformations, eg brain disorders in some crested breeds;
•bacterial ingress through the open navel within 24 hours of hatching. 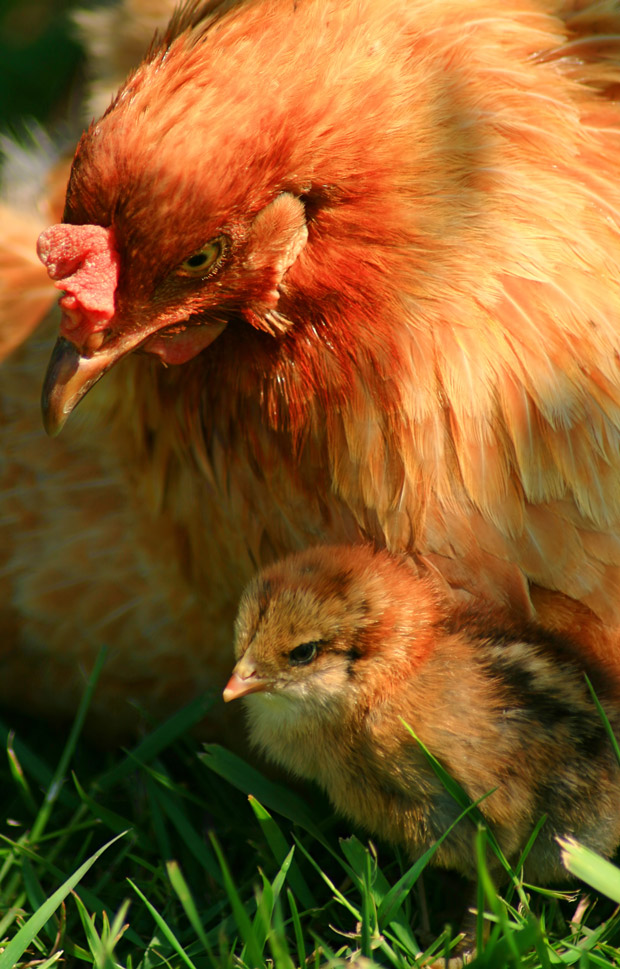 Growing birds can be exposed to a lot of disease organisms before their immune system is fully developed. The right living conditions help prevent the spread of disease, including:

Coccidiosis is a parasite. Chicks need gradual exposure to it, so they form an immune response. Medicated starter feed (containing a coccidiostat) for the first 6 weeks will help. It retards the growth of any coccidia they ingest, helping to prevent a potentially fatal infestation. 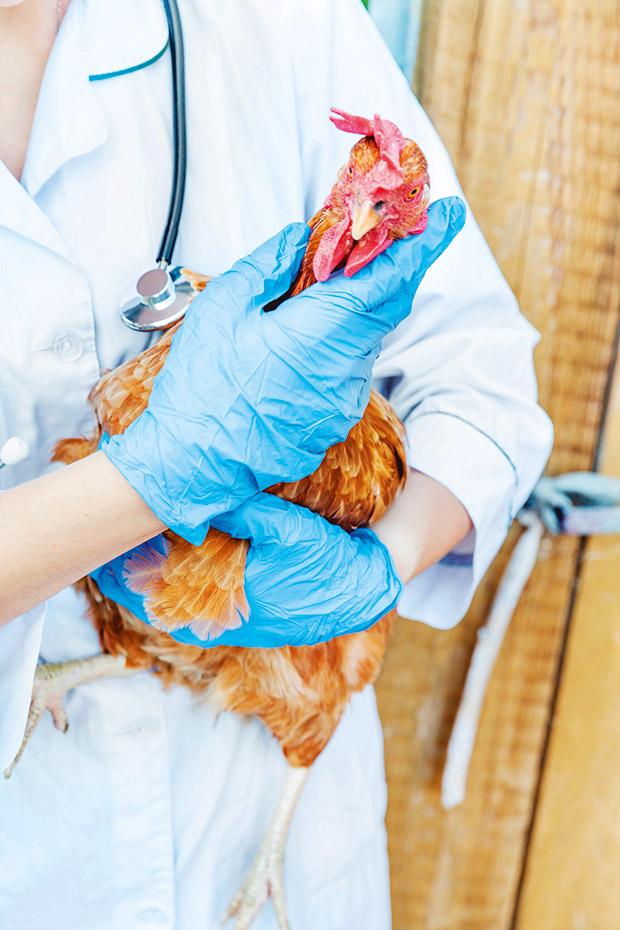 At this stage of life, factors other than disease come into play, especially stress. It’s often caused by:

•a sudden or large change in temperature;
•bullying by higher-order birds;
•inability to get adequate feed and water, eg bigger birds chasing them away from feeders and waterers;
•a change in diet or bedding.

Stress causes a change in the pH of the gut. Bacteria take hold, and the bird can waste away for seemingly no reason. Some causes of sudden death may be due to an infection that occurred weeks or months earlier.

Chicks are usually infected with Marek’s disease when they’re about two weeks old, but don’t show signs of it for another 8-10 weeks. Usually, you’ll see the tell-tale symptoms of Marek’s: depression, limping, and an odd paralysis where the bird will have one leg forward, one leg back. However, it should always be considered a possibility in sudden death cases of birds aged 10-40 weeks. A necropsy may show tumours caused by Marek’s in the liver and other organs.

This can include temperatures that are too cold for chicks, or too hot for birds of any age. Poultry can’t sweat so a sweltering day can cause fatal heat stress. Eggs in an incubator need fresh air (oxygen). It’s critical for embryo survival and the health of chicks after hatching.

Birds can crush, smother, and suffocate others if they squash into the corner of a coop or shed. It’s known as ‘piling’ in the commercial poultry industry, and can be caused by panic due to an intruder in the coop, or birds crowding together for warmth.

This is easy to overlook as a cause of sudden death. Poultry require specific essential nutrients and a clean source of fresh water for good health.

Birds that are malnourished or dehydrated will succumb to disease far more quickly than healthy ones. The easiest and (usually) cheapest way to ensure your poultry are receiving a nutritious diet is to use a quality commercial poultry feed. If you want to make up feed yourself, it’s important to have a good working knowledge of the essential nutrients poultry require. 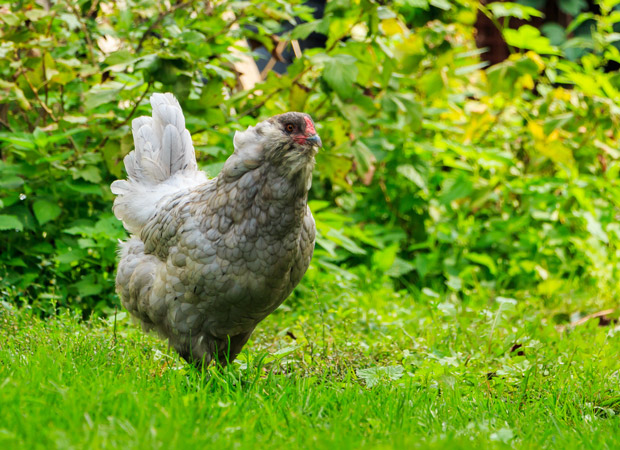 This includes the right types of protein (and amino acids), fats, minerals, and vitamins. Check the quality of feed ingredients, especially grain, which can vary greatly due to the time of year or source.

Occasionally, a bird may eat too much, too quickly. The pressure of food in the crop can stop the lungs from expanding and the heart from beating. You may see convulsions, a lot of wing flapping, and then the bird lying on its back with its feet in the air.

THE ONE THING CHICKS SHOULD NEVER EAT

One common cause of sudden death in seemingly healthy pullets at the point of lay (18-20 weeks) is caused by giving them the wrong feed at the wrong time. Chick starter is low in calcium (less than 1%), as a chick’s kidneys are still developing. Only when a bird reaches the point of lay can they process the higher levels (3%+) in layer feed.

Chicks (0-16 weeks) eating a high calcium diet can quickly develop crystals in the kidneys. Their affected kidneys then come under great stress when birds reach maturity and start to lay. The result can be sudden death due to renal failure. 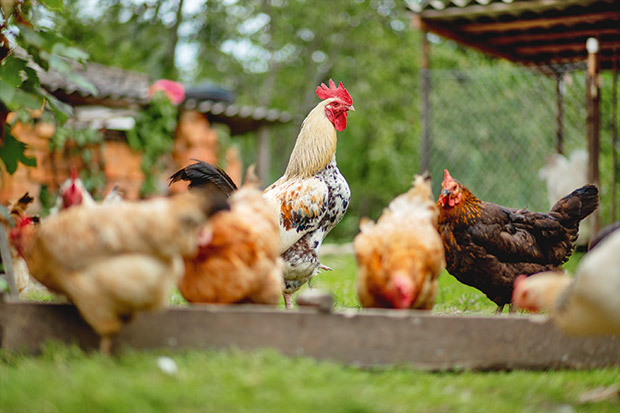 1. Don’t allow young birds access to layer feed until they are at least 16 weeks old, preferably 18-20 weeks (or even later for some heavy breeds that mature at 30-35 weeks). If you stop feeding starter at 6 weeks, use a grower product (also low in calcium).

2. Don’t mix shell grit or other calcium supplements into layer feed – have it available in a separate dish (that chicks can’t reach), so hens can choose to eat it or not.

3. If you make up your own feed, ensure the calcium level is correct for the bird’s age.

Usually, you’ll see symptoms of a disease before death, but there are a few occasions when it’s sudden. Some conditions can affect the heart and cause a heart attack.

Bacterial infections can sometimes overwhelm a bird. Various types of salmonella can cause sudden death but would have to be confirmed with a faecal swab. Salmonella is common in wild ducks and other bird species, so free-range flocks are especially vulnerable. If you lose a few birds to sudden death, it would be worth testing for salmonella bacteria, which can last in the environment for a long time, including in cracks in concrete floors. 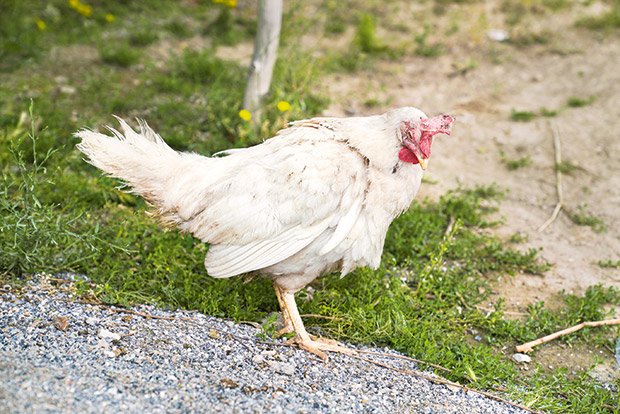 Egg peritonitis is another possibility, especially in older hybrid hens. Yolk material leaks into the abdomen, causing inflammation, and then a bacterial infection takes hold. Some hens may show symptoms when the infection becomes debilitating. They may stand upright like a penguin, with a heavy, sagging abdomen between their legs. Others are pretty good at disguising it, and the first sign is their sudden death.

There is a wide range of toxins that affect poultry, from plants to everyday household products. Most cause birds to exhibit symptoms, often neurological, but if you happen to miss them and the bird is already dead, consider whether they’ve had access to:

•fertiliser granules
•zinc (used in water troughs for stock to prevent facial eczema);
•insects killed by insecticides;
•grass or weeds killed by herbicides;
•salt, used in herbicides, and in ham and bacon;
•bait, eg slug/snail, rat;
•plants or weeds, eg green berries of black nightshade can cause death in 10 hours if eaten in quantity.

Deaths in your flock are highly unlikely to be caused by one of the three worst poultry diseases in the world – avian influenza, Newcastle disease, or infectious bursal disease (IBD)* – as none are present in NZ.

But there’s always a small chance of them getting into NZ. Possible entry points include smuggled birds, poultry meat, or eggs. This is why there are strict import procedures in place, which protect NZ’s native birds and our billion-dollar poultry industry. A first case could easily be in a backyard flock, and the impact would be devastating. Birds, including wild ones, would have no immunity. An initial outbreak could result in possibly millions of deaths.

Warning: What to do if you suspect you have a serious disease outbreak – if you have multiple deaths or a widespread illness in your flock, even if it’s a small flock, it’s vital that you talk to a vet, even if you intend to euthanise the birds. Depending on the symptoms, testing may be free. You can also call the Biosecurity NZ hotline: 0800 80 99 66 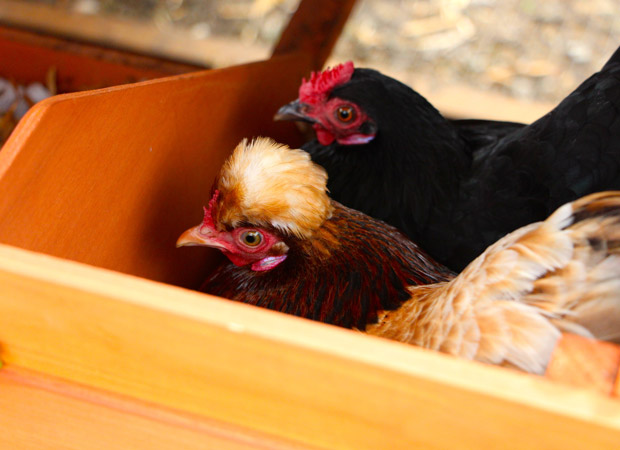 3. Infectious bursal disease (IBD)
Mortality rate: 60%+
Symptoms: affects chicks aged 3-6 weeks, first sign is often a watery or white diarrhoea that forms a paste around the vent, may be bloody, chicks peck at their vents, depression, no appetite, dehydration, huddling, ruffled feathers, sitting, sleeping with their beak touching the floor.

Note: There was an IBD outbreak on two commercial layer farms in Otago owned by Mainland Poultry in 2019. The virus was contained, and testing of all other farms in NZ was clear.

1. Assess bird condition and weight frequently. Pick them up, feel their body condition, weigh them, and keep a record. It’s especially important to do this with birds new to the flock and young ones, which are more likely to be bullied away from feeders.

2. Feed a quality, balanced diet specific to the birds’ age and needs, eg chick starter for chicks up to 6 weeks, high protein crumbles for meat birds.

3. Ideally, use a treadle ‘step-on’ feeder, which allows birds 24-7 access to feed. If you’re feeding daily in troughs, make sure they’re widely spaced, so vulnerable birds can eat in peace, away from bullying birds.

4. If you’re providing a daily ration, feed it in the morning. If you split it into morning and late afternoon feeds, the greediest, fastest eaters may get more than their share, twice a day.

5. Offer a small scratch feed of grain (5-10g per bird) in the late afternoon. This means they’re digesting it overnight, which helps to keep birds warm.