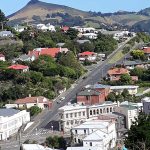 Back in 1989, poor old Port Chalmers was voted the second-least desirable suburb in Dunedin. How things change in three decades. 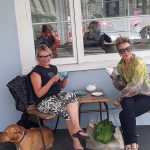 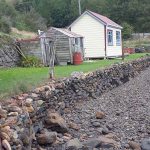 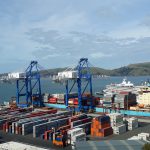 Ghosts, nudie photographs and a Pacific slave trade – Lisa Scott takes a tour of Port Chalmers and discovers a few skeletons in the closet of this Dunedin suburb.

The first settlers named this area, 15 minutes from Dunedin’s centre, Koputai which means ‘full tide’ but its common name of Port Chalmers is in honour of religious leader Thomas Chalmers. Thomas, a 19thC Scotsman, made his name in many disciplines from mathematics, chemistry, evangelical teaching to preaching on behalf of the poor – who he thought only had themselves to blame by over-breeding – and resisting the power of the church to intervene in parish affairs. He found himself at the head of the Free Church of Scotland and also found himself namesake of a small far-away port town. 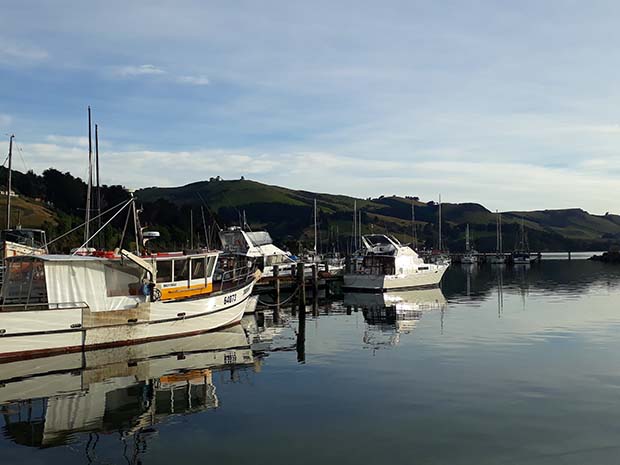 Back in 1989, poor old Port Chalmers was voted the second-least desirable suburb in Dunedin. How things change in three decades: this is now highly sought-after real estate. The little village by the sea with a dodgy past is chock-a-block with outrageous characters. An elderly boxer smiles from a porch armchair, exposing teeth like fence posts in a muddy paddock, the footpaths are full of Ragnar Lodbroks in high-vis vests, and that woman in the eccentric hat could just as easily be a millionaire as daft as a spoon. I’ve been introduced to the quirky characters of Dunedin’s largest port on a three-hour tour with Port Chalmers Heritage Pub Tours. These days, logging trucks shake the historic buildings (especially the Victorian BNZ, a crumbly cake-slice shedding coconut over the corner of George and Grey), and cruise ships loom over the stacked Lego blocks of containers. It’s marvellous. But as our guide Pete tells us, this town has a rich history filled with colourful characters – the ghosts of some still let their presence be known. Iona Church, built from Port Chalmers bluestone, with Oamaru stone piles and kauri interiors and a roof clad in slate scales. Sternly handsome, it’s an unflappable butler attempting to ignore the crass industrial clunks and clangs emanating from the port’s crouching gantries, casting spider shadows. Beneath its spire, a street full of pubs (the early settlers were either knee-benders or arm-benders, or both) most now-turned cafes and shops, where locals are waiting to pull your leg, tell you a tall tale. However, in a town once known for sly-grogging and blackbirding, the truth is sometimes stranger than stories.
BARE NAKED LADIES 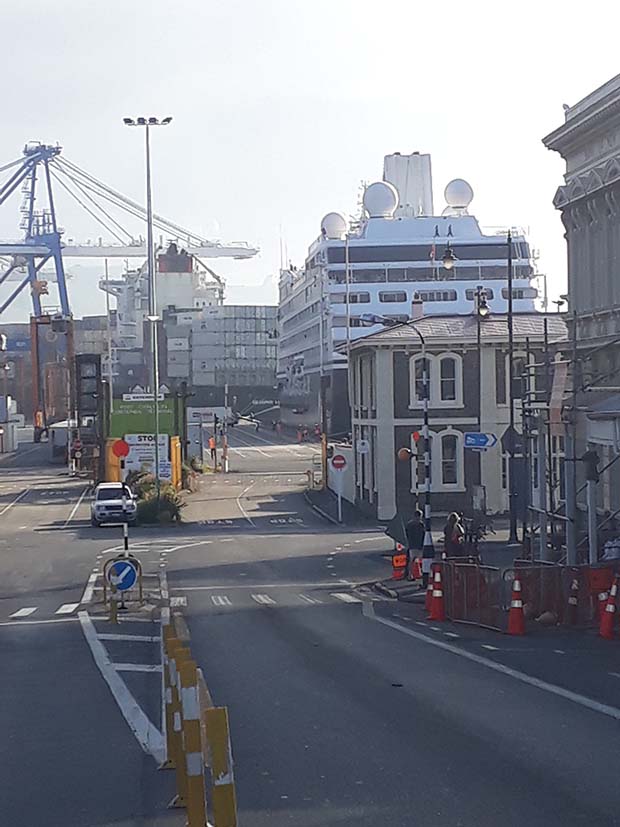 David Alexander De Maus was mayor of Port Chambers in the 1880s. A mason and musician who ran all the entertainment in town, he was also the first person in New Zealand to be prosecuted for lewd photos, after which he sensibly stuck to ships, and his maritime photos can still be found in many collections throughout the country. The nudies? Who knows? 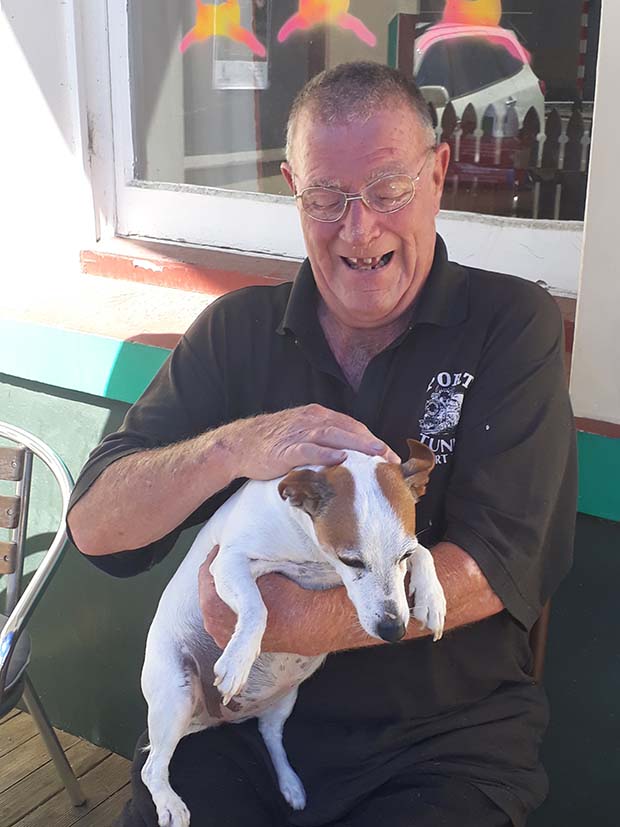 Fred Morgan is the present day owner of the Tunnel Pub, opened in 1846; it’s the oldest pub in the South Island, older than the founding of the province of Otago itself by two years thanks to a magistrate on the first surveyor ship and a licence to sell alcohol thought more pressing by the sealers and whalers than democracy. Fred’s been a boxer (a good one? “Well, I haven’t got a broken nose”), a freezing worker, a painter and decorator. He became a publican on a whim 34 years ago, and is now the owner of the world’s largest collection of Jim Beam miniatures, never opened. The Tunnel is haunted by the ghost of the former publican and for this reason, Fred’s little dog Annie doesn’t go into certain rooms. 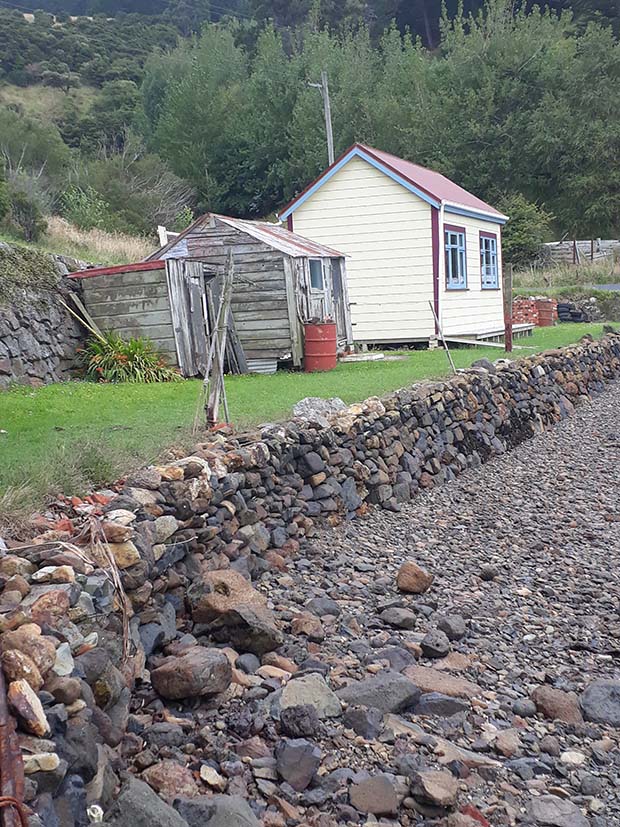 A family of 18 slept within Lewis Cottage.

The Lewis family were early settlers in Port Chalmers. Eighteen children and their mother, all lived in a one-room cottage at Deborah Bay. The boys slept outside in the shed called the ‘duck house’, the girls slept inside. The last to live there was Mungo, who when he died at the ripe old age of 89, had only been to Dunedin thrice and hated it each time, plus, he had everything he needed at the Carey’s Bay pub.
The Taint of Slavery

THE TAINT OF SLAVERY The tunnel next to the tunnel.

Next to the Tunnel is an actual tunnel and next to that, a patch of scrub veiled in flax and pittosporum, once the site of a store owned by Charles Clark, ship’s chandler, sometime captain and, in 1871 owner of the SS Wainui, a slave ship, outfitted here complete with shackles and manacles in its hold and two cannon on board pointed at the hatches below deck. It seems incredible now, but a Pacific Island slave trade supplying Peruvian plantations flourished briefly in the early 1860s, devouring thousands of Polynesian men, women and children and Port Chalmers had a small but infamous role to play when the Wainui’s crew kidnapped Nukapu Islanders (from the Solomon Islands) in a loathsome surprise raid, transporting them to Peru to dig guano, from where, tragically, they would never return as they died of local diseases. 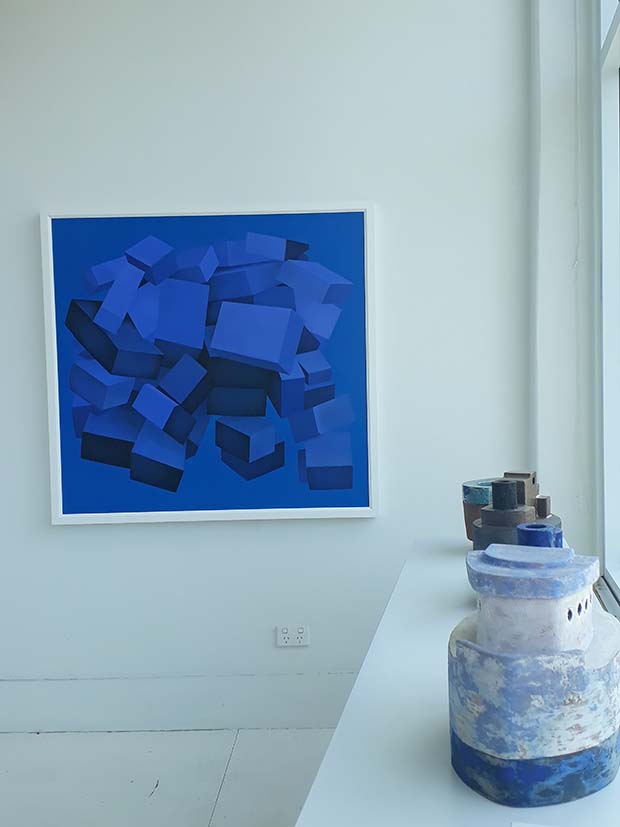 These days Port Chalmers is a artists’ haunt. It has so many artists, writers, jewelers, potters, actors, playwrights and sculptors living and working in it. Why? I’m not sure. With its industrial/historical/beautiful juxtaposition, it’s an inspirational place to live alright, and there’s good coffee, but that’s not nearly enough reason for such a bold flourishing of creative endeavor. Must be something in the water.