Travelling through Dublin by foot 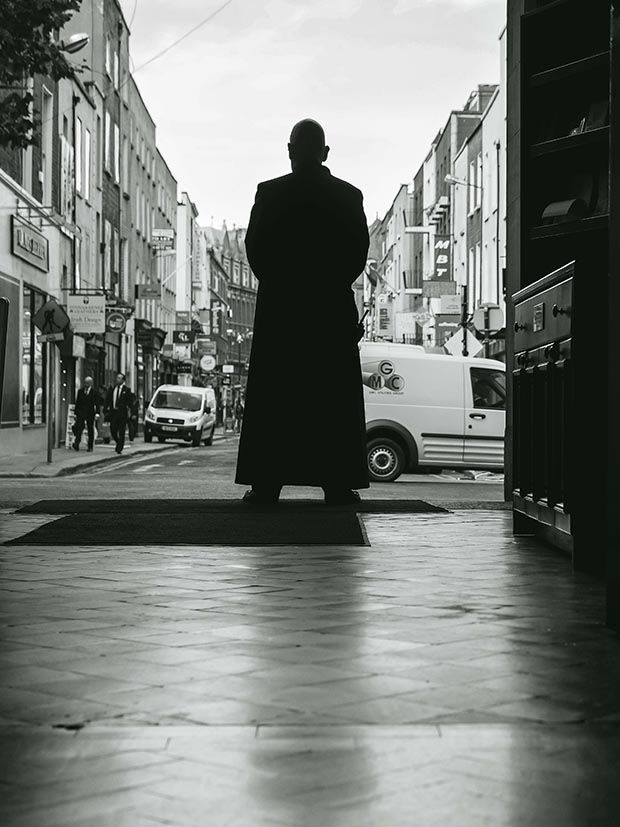 A priest looks out the doors of St Ann’s Church. A nearby sign says, “Looking for more? Explore the meaning of life.”

A visitor to Dublin meets Molly Malone, Oscar Wilde and Handel, and downs his first-ever Guinness in the embrace of a local pub-goer.

I’m on my knees. In front of me is a row of wooden seats with a shelf where you can rest your arms while praying. Minutes before, I’d heaved open a massive door. Light had squeezed in, projecting my silhouette onto the masonry wall opposite. I’d entered a voluminous space with arches and vaulted ceilings and leaded light windows. In the distance, candles flicker.

I’m in Christ Church Cathedral, one of Dublin’s oldest churches. Everything speaks of history, of deep time, of veneration and devotion. Well, not quite everything. There’s a desk and a eftpos machine where you buy an entry ticket. 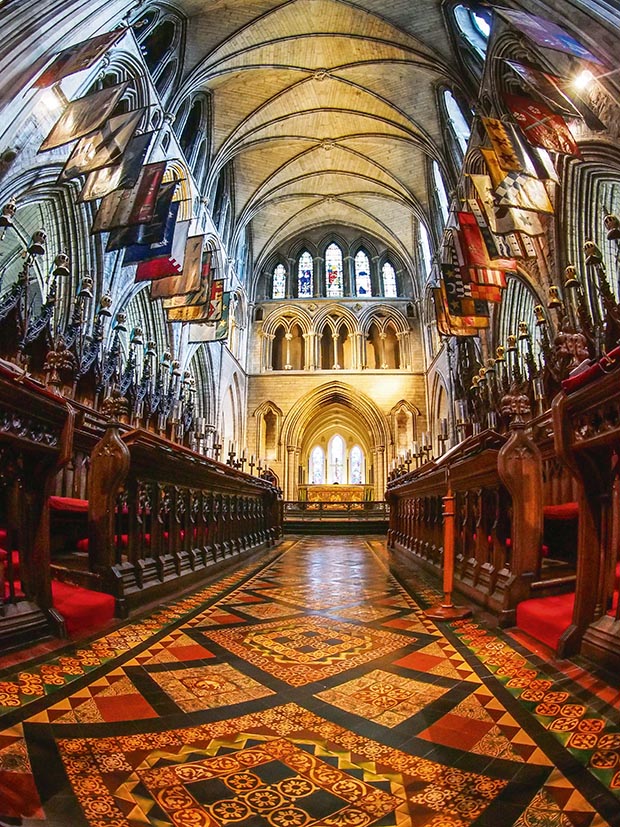 A rich tapestry of patterns and decoration in St Patrick’s Cathedral.

The floor, which is a resplendent tapestry of tessellations, bites my knees. There’s a guy tapping the tiles with a tiny hammer. I lean over and whisper, “What are you doing?”

“Checking for loose ones. Each one of these” – staccato tapping again – “costs 100 pounds to replace.”

I glance towards the eftpos. “Really? Wow.”

“You have to get the colour, texture, pattern and glaze just right so it matches. The new with the old.”

I brush my hand over the tiny undulations, tracing 950 years of the shuffling soles of the faithful souls. The tapping moves on. In front of me I discover knee cushions, each one delightfully embroidered by devoted parishioners. I leave them undisturbed. Time to get up. 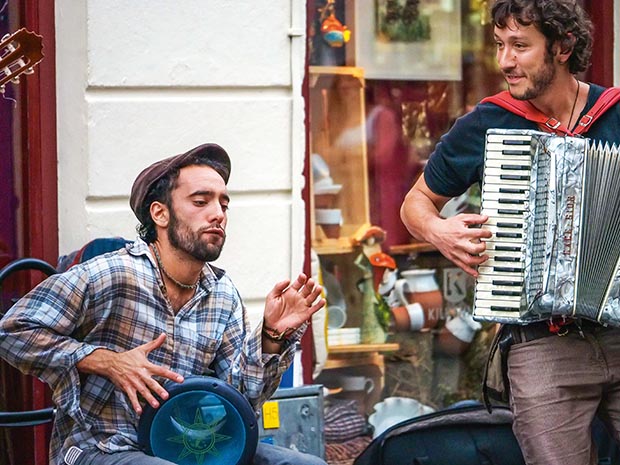 Dublin is best seen on foot. It’s flat and surrounded by history. The only transport I take is the taxi from the airport. During the ride, we crossed the Liffey River.

“So this is the Liffey, eh? The great divider.”

The driver nods. “The rich on the south, the poor on the north.”

His laugh is throaty. “I’ve lived me whole life on the south and I isn’t a rich man.” 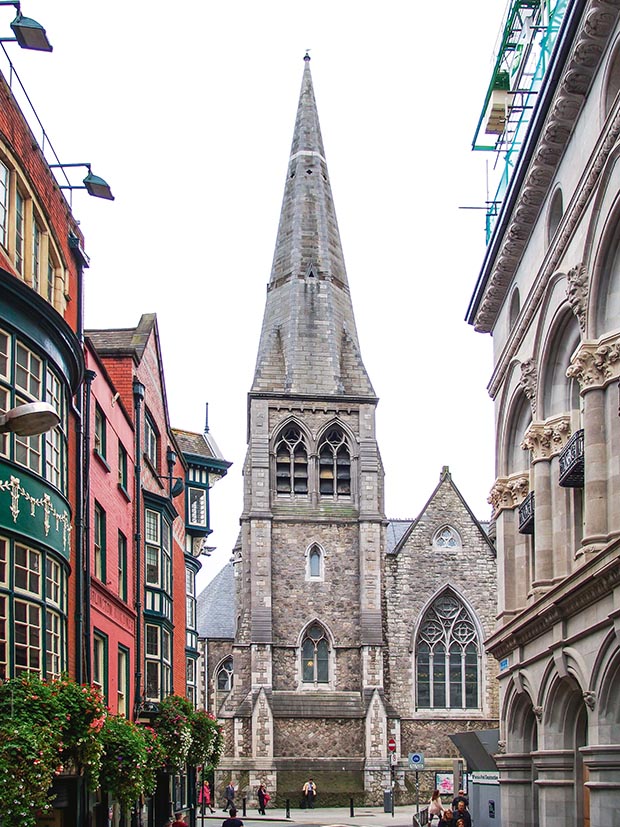 St Andrew’s Church (now the central tourist office) appears between some of the many historic, flower-festooned facades that make exploring Dublin on foot so enticing.

From my hotel – The Clarence, owned by U2’s Bono and The Edge – I observe the Liffey in the evening, a dark artery around which city life began in the Viking era. A swan, starkly white, cuts through reflections of flickering lights and rippling facades.

More stories you might like:
Rangitīkei: Rivers, estuaries and a pretty coastline are begging to be explored

In the morning, I walk toward a crease on my unfolded, inside-out map, passing a group of tourists gathered around a young man, who sings: “In Dublin’s fair city, where the girls are so pretty, I first set my eyes on sweet Molly Malone.”

He’s standing very close to a bronze Molly and her barrow. Molly, says legend, was a fishmonger by day and plied an extraordinary gentlemen’s trade by night. 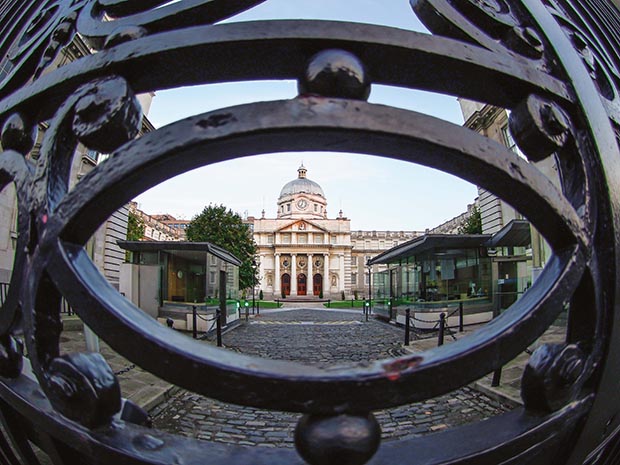 The crease criss-crosses Grafton Street, Dublin’s main shopping strip, but I’m not here for retail recreation. I discover a street that’s a stage where performances syncopate and shimmy across the pavement. There’s another “bronze statue”, a performer so realistic that pigeons land and poop on him.

I give him a coin to cover his laundry bill. I’m reminded of the story of The Happy Prince, where a swallow rests on the prince’s shoulder, which seems quite appropriate because Dublin was home to Oscar Wilde. I would meet him later in the day. 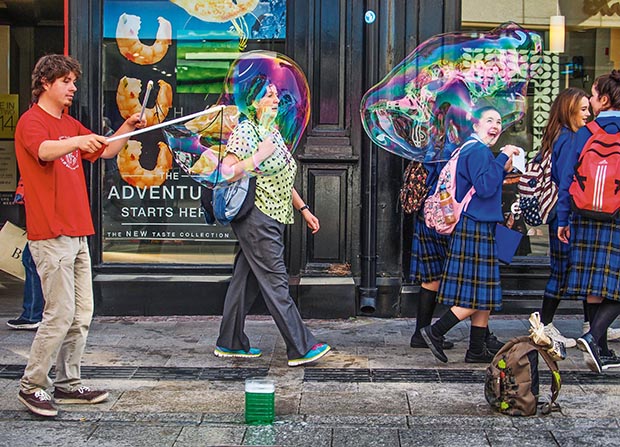 A guy creates soap bubbles so large I can see the surrounding history reflected in the translucent curves, and a kid in a pram going past reaches out and pop!… the skins explode and small droplets of watery dishwashing liquid cover us both, and she squeals with do-it-again delight.

Bette Midler is here, wearing a cap. He’s pumping an accordion and doing a plausible rendition of one of the artist’s songs but with a “let’s-not-do-this-again” look. An attractive girl with bright red lips and an accent that’s not Irish is doing a souped-up version of You’ve Got a Friend. The people weaving around me are an aggregate of cultures but mostly Polish – looking for better salaries – and quite a lot of Irish too. 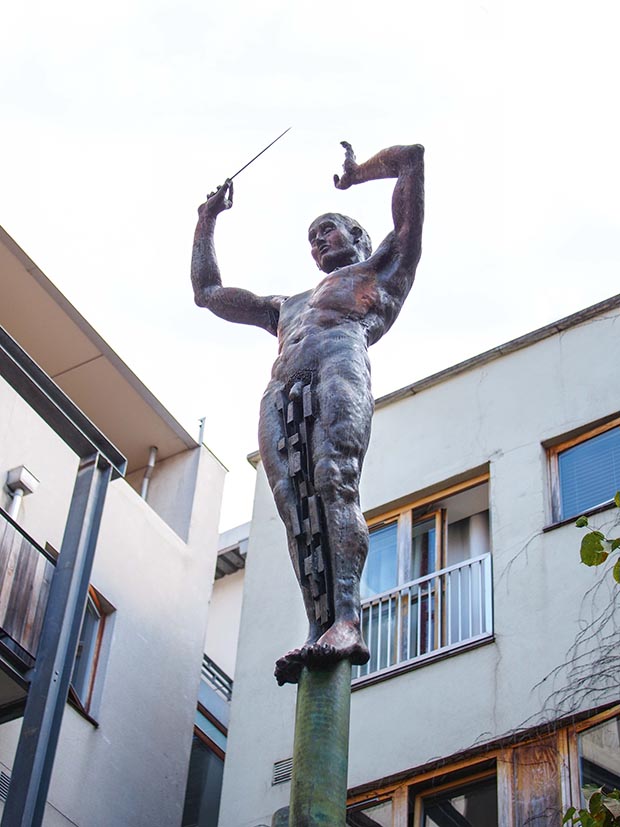 A bronze statue of Handel in a courtyard where once his Messiah was premiered. Although depicted with a baton, Handel never conducted an orchestra.

A group gathers to watch two Russian kids head-spin on the terracotta pavement, their legs splayed like propellers. It’s a dazzling performance.

It’s spring in Dublin. All year round. Flowers decorate arches and verandas, brighten footpaths, enhance lampposts and bridges, soften facades and beautify statues. I’m admiring a hanging basket of variegated blooms, petals fluttering like butterflies in the warm breeze, and feeling pretty much “in life”, with that buzz you get when spring follows winter’s thaw – when unexpectedly – I begin to think about struggle.

Struggle shaped Ireland: plundering Vikings, the great famine of 1845, the 1916 Easter Rising, independence (finally achieved in 1922), political and religious divisions (in one cemetery, an underground wall still divides Catholics from Protestants), and, more recently, the catastrophic financial collapse, reducing the roar of the Celtic tiger to a meow. Flowers (which festoon every Irish town) are hardwired for hope. They cut right through the long winters of disharmony: indeed, flowers might be the one thing all Irish agree on.

Dublin once Dubhlinn, Gaelic for “a dark pool”, now sparkles with joie de vivre. The air is clean. The city has emerged from a coal dependency that gave buildings and people grey complexions and miners an income, along with an incurable, sulphurated chest cough.

I am in a Dublin pub, in a small, low-light lounge area. The air has that closed-window smell, tinged with beer. Seated nearby are four elderly gentlemen, who are so in sync with their surroundings they are not as much in the space as part of it: the fireplace with wooden surround, the black wallpaper with white floral prints, the yellowing glass lights and them, with herringbone caps and loose woollen jumpers and speckled chins – all inextricably bonded. It feels as if I’ve dropped out of the present and into the past. The waiter, with brisk familiarity, offers a sideways nod. One gentleman responds, “The usual.” “The usual” is fresh ham on brown bread triangles, smeared with butter and ochre mustard. And a pot of tea. I order the same. Perhaps it’s due to the atmosphere or the flowers, but it tastes unbelievably good. So I linger, sipping tea.

In a central-city garden, a man reclines on a large rock in an extravagant jacket sculpted in coloured stone. I’ve come face to waist with Oscar Wilde. From the side he’s smiling, like someone who knows he has a clever wit, capable of delivering epic one-liners. From the front he looks perturbed. He’s been having sex with a man, and now he’s staring, stony-faced, at a tiny bronze statue: his wife. She’s naked, fragile and vulnerable. Her hands clasp a swollen belly and she looks toward the nearby family home. 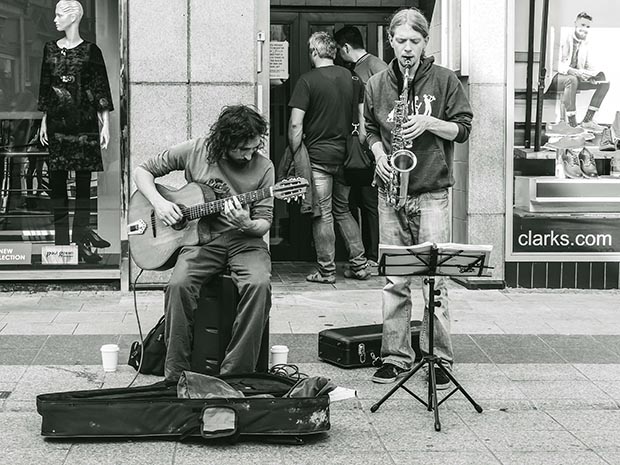 The Gravity Bar is where my initiation takes place. It’s located at the top of the Guinness Storehouse – the brand’s spiritual home and brewery – an atrium shaped like an upturned pint glass with a 360-degree panorama of Dublin. I take a long pull from the creamy black liquid and turn to a bloke on my right.

“This,” stabbing my finger at my glass, “is my first-ever Guinness.”

Eyes widen under hedge-like brows. “Foook me,” he says piercing the cacophony around me. His accent is part-Irish, part-Guinness. He drapes an arm around my shoulders. We “clink” and drain a third of our glasses in perfect sync.

The Gravity Bar is one of Dublin’s millennium monuments – although Dubliners recognize 1988 as their actual millennium. Dublin city began in 988. 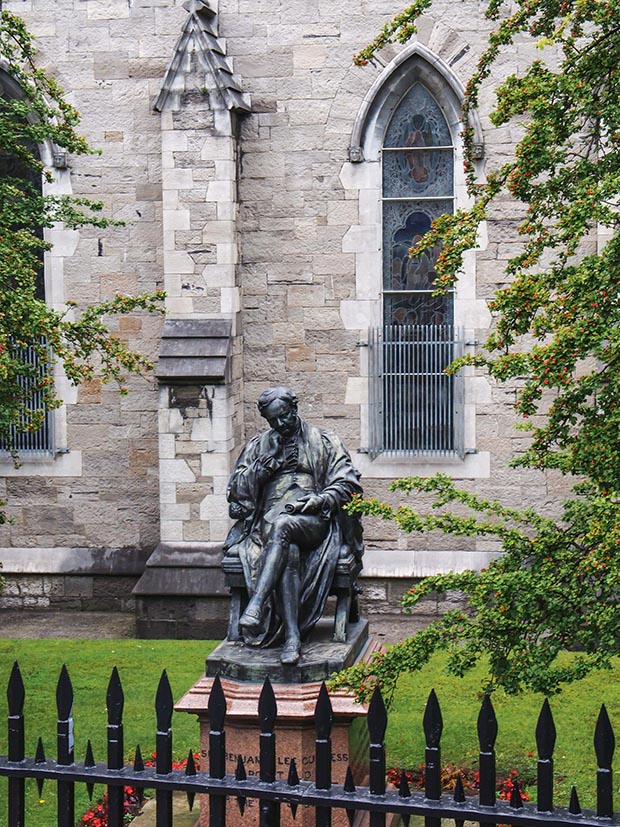 Arthur Guinness turned a 100-pound inheritance into a mega fortune. In 1759, in a monumental leap of entrepreneurial faith, he signed an incredible 9000-year lease. Arth, as he signed his name, was at home with large numbers: his wife bore him 21 children.

His was a gobsmacking achievement. No less impressive, albeit different, is what took place on Fishamble Street 275 years ago. Today, an ancient white painted archway is all that’s left of the Great Music Hall. In 1742, 700 people crowded together to hear the premiere of Handel’s Messiah. Ladies had been requested to attend “without hoops” and gentlemen “without swords” in order to increase the capacity of the hall.

The archway now gives entry to a courtyard, and in the back corner is a statue high up on a post. When I reach the sculpture, I see patina-coloured organ pipes, with a naked Handel mounted atop, baton in hand. I’m not sure why he’s naked. I don’t imagine he attended the premiere like that. The sun is leaving Dublin as I head back to The Clarence, weaving around the evening cheer, with clusters of people and bright lights that flow out from cafés and bars. I gaze over the Liffey and the tops of buildings to where the tip of the millennium “stiletto” Spire of Dublin glows, brighter and brighter, as the night deepens.

I unfold the map, unsnarling the streets of Dublin. There are more creases to cross. I run my finger from furrow to furrow, along the Liffey and up O’Connell Street towards the 120-metre-high spire that pierces the dark. 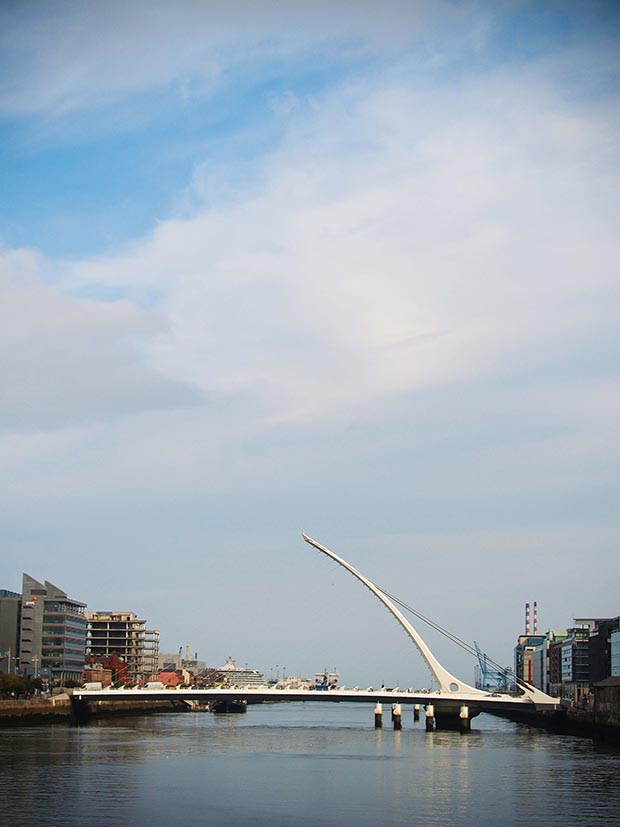 The 2009 Samuel Beckett Bridge by Santiago Calatrava – cable-tensioned and symbolic of a harp on its side.

NOTEBOOK
Getting there: From Auckland, fly to Dublin via San Francisco or Los Angeles with Air New Zealand and Aer Lingus. Emirates and Qatar also offer one-stop services with direct access to Dublin via the Middle East.
Accommodation: The Clarence is a boutique hotel with nice views over the Liffey River and across the city. theclarence.ie
Must do: Walk. It’s the best way to enjoy Dublin. Check ireland.com for route ideas. Cross the stunning bridges that span the Liffey including the dramatic Samuel Beckett bridge, which looks like a harp on its side. Follow the many great writers that have their origins in Dublin, including James Joyce and Oscar Wilde. Don’t miss the small shop on Lincoln Place called Sweny which featured in Ulysses. Stroll around the Merrion Square Gardens. Pop into The Cellar on Merrion Square West (merrionhotel.com) for a Kilbeggan whisky. Walk the length of Grafton Street and enjoy the buskers. The Guinness Storehouse (guinness-storehouse.com)is a fantastic place for a tour followed by a drink in the Gravity Bar with its spectacular views of the city and the Dublin Mountains.