I was walking through the produce section at the supermarket and heard someone exclaim, “Seven dollars for one capsicum. That’s outrageous.”
Considering it’s the middle of winter and that capsicum traveled from Europe to New Zealand, $7 isn’t outrageous. What is, is that we think it reasonable to eat every type of fruit and vegetable all year round. Rising food prices are already an issue, so why add to that by buying out-of-season produce? 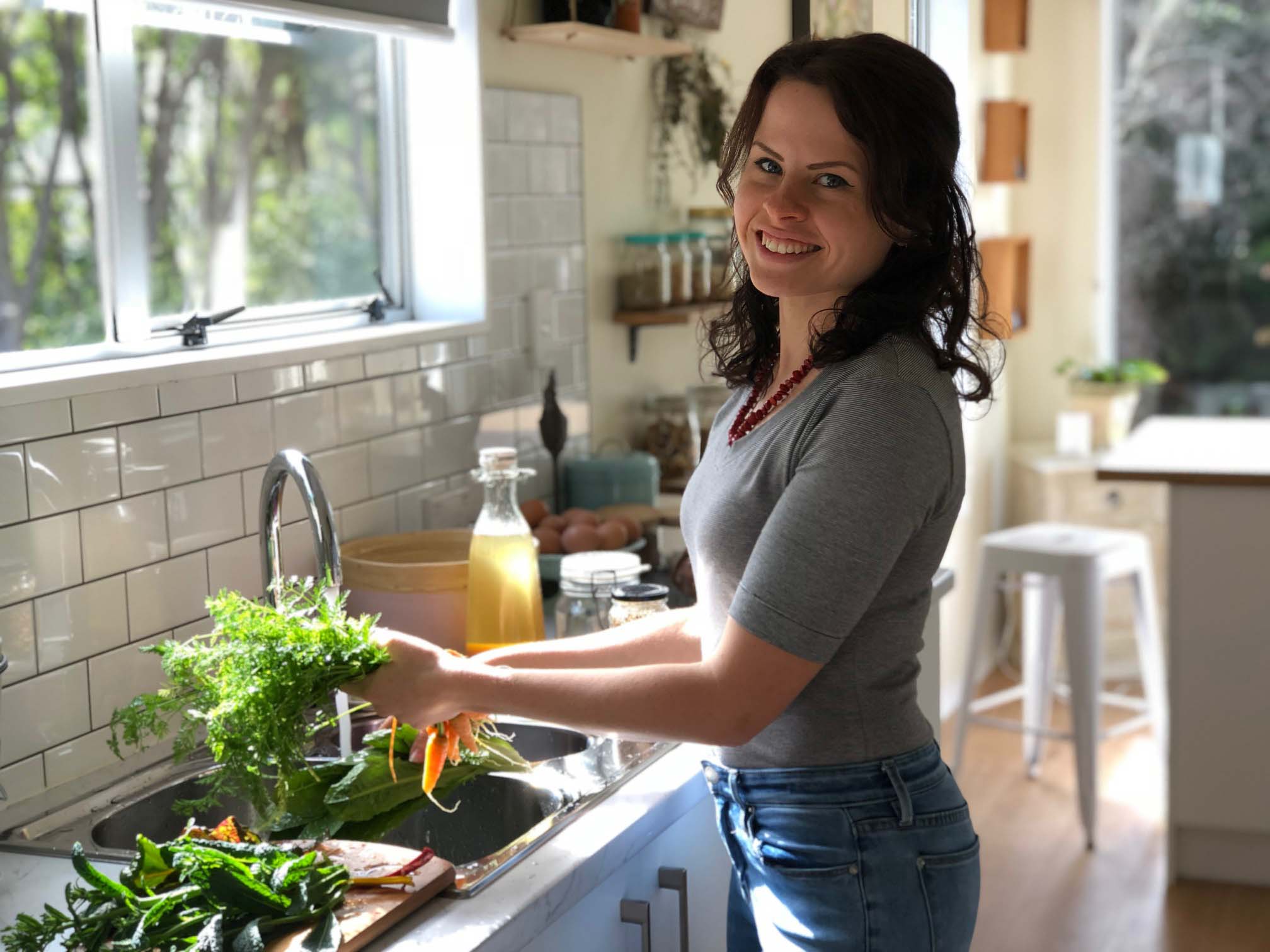 Later that day, I picked silverbeet and broccoli for dinner. Sure, there was no pop of bright capsicum colour, but I knew I was eating seasonal, fresh produce that had journeyed less than 20 metres from the garden to plate.

I’m Elien, from Whitby, Porirua. I live with my husband Che and two boys, Alek (7) and Lucas (6). While my boys are at school, I work as a local gardener and write for my gardening blog, Home Grown Happiness.
Growing food has always interested me, even as a child. At 13, my science fair project was working out whether radishes grew new roots when their bottoms were cut off. (They do by the way. Handy, if you want to replant the tops to save seeds.)

We bought our first home in 2015 and I was keen to make my mark on the garden. In previous rentals, I had vegetable patches but the idea of having my own space was exciting. I imagined an awesome food forest.

Our budget didn’t allow for a sizeable, sunny, section. Instead, we purchased a house with a tiny, shaded, barked area and a tall, terraced hill. It had been landscaped to be as low maintenance as possible and, as we are situated at the bottom of a sort of valley (there are houses and trees above us), sunlight was going to be an issue. 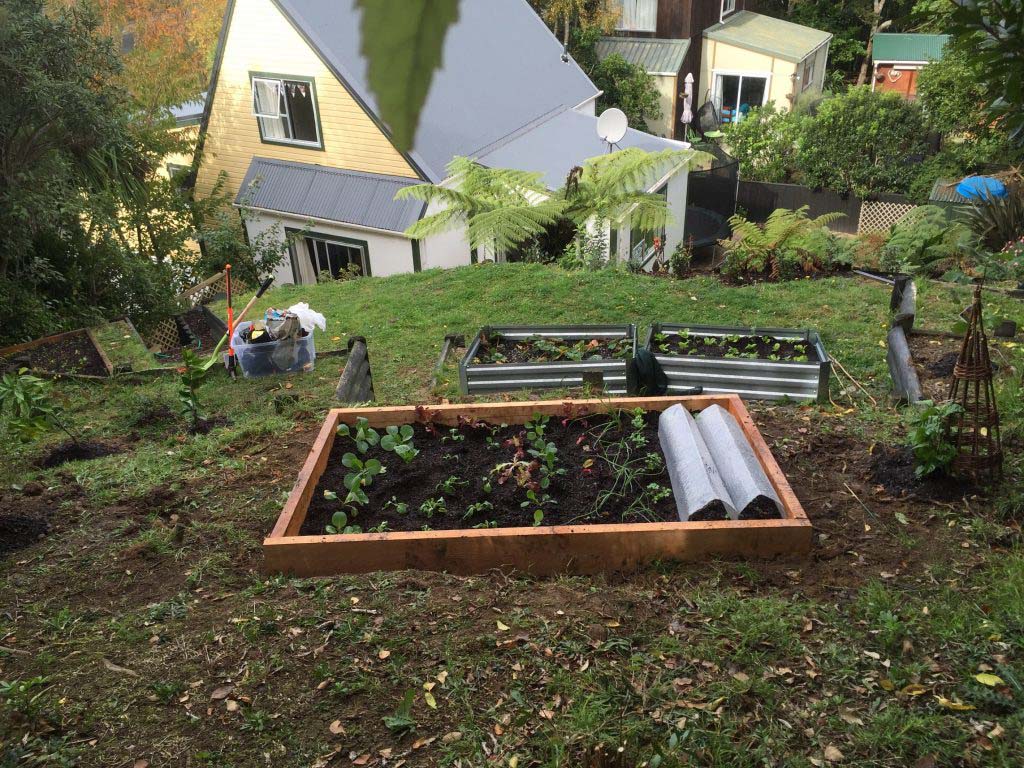 First, we put in a couple of raised beds to get some vegetables started while I made notes of when the sun hit the garden.
Having the raised beds was all right to start, but there was so much I wanted to plant and not enough room, so we scrapped the raised bed idea, which meant we weren’t confined by their borders.

In the meantime, I had also worked out how the sun traveled. In summer, parts of the garden got about six hours but most got four to five. In autumn, this quickly dropped to three, in winter it was only one to two. The sun settled in different areas throughout the day so having no borders meant I could plant in all the spots the light reached.

I adopted a “no-dig” and “deep-mulching” method which allowed me to utilize every centimetre, as well as turning the original hard clay into nutrient-rich soil, teeming with microorganisms. 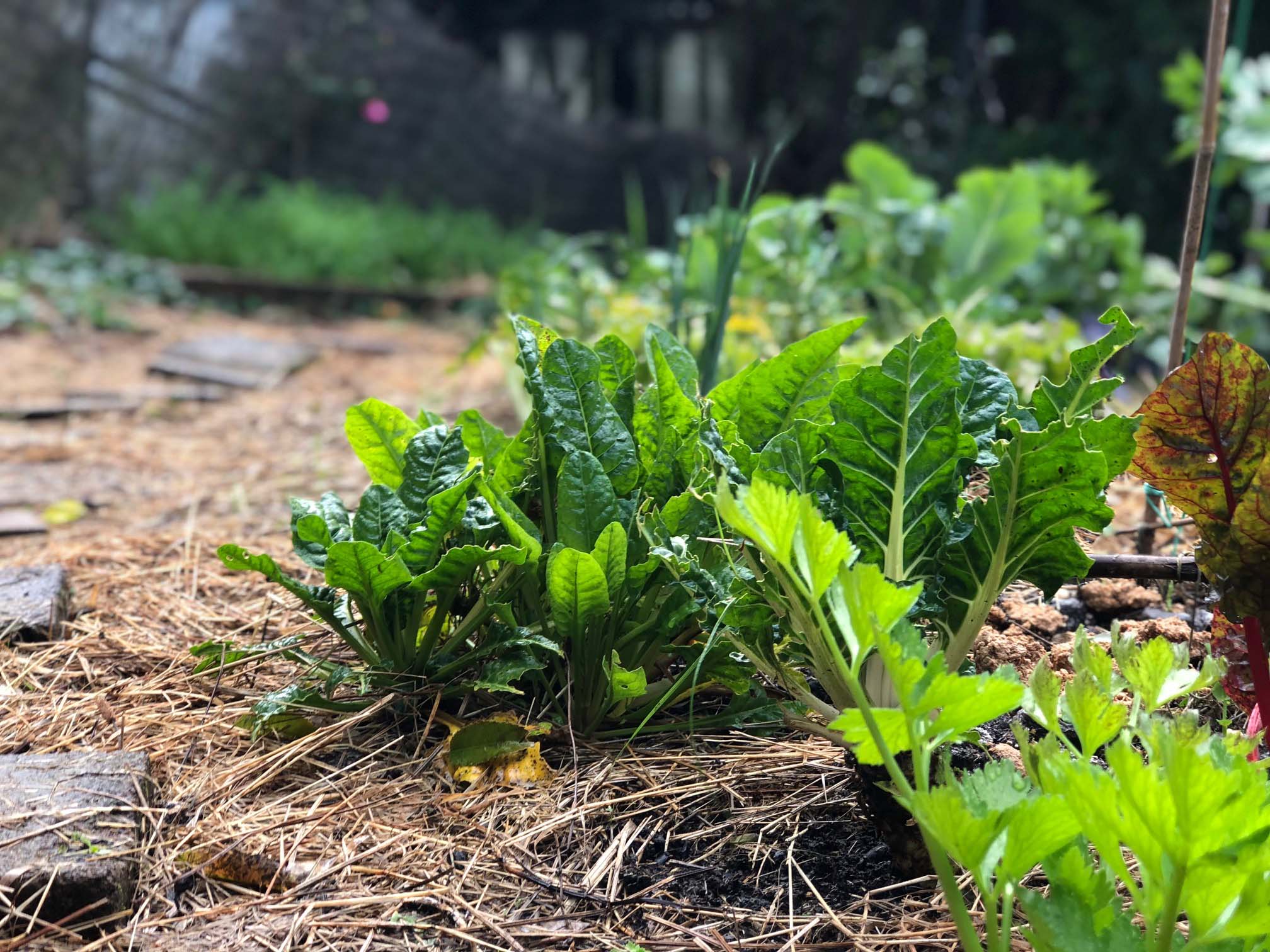 Over time, the entire terraced garden became a hay/straw covered planting area. I added some pavers to walk on but, apart from that, everything is vegetable garden.

Timing is essential in my garden because of the lack of sun. I plant small amounts of seeds and seedlings every few weeks so I get staggered harvests, which are especially important in winter. In January, I prepare what I’ll grow and eat in winter and start my seeds in trays. By February, I plant out most of my winter crops, followed by another round in early March. Produce I plant in April isn’t ready until late spring so if I miss my February deadline, I wouldn’t have much food to harvest in winter.

In winter we eat a lot of spinach, kale, broccoli, cauliflower, chinese cabbages, and carrots. Every part of the vegetable is used as there’s not enough to be wasteful. 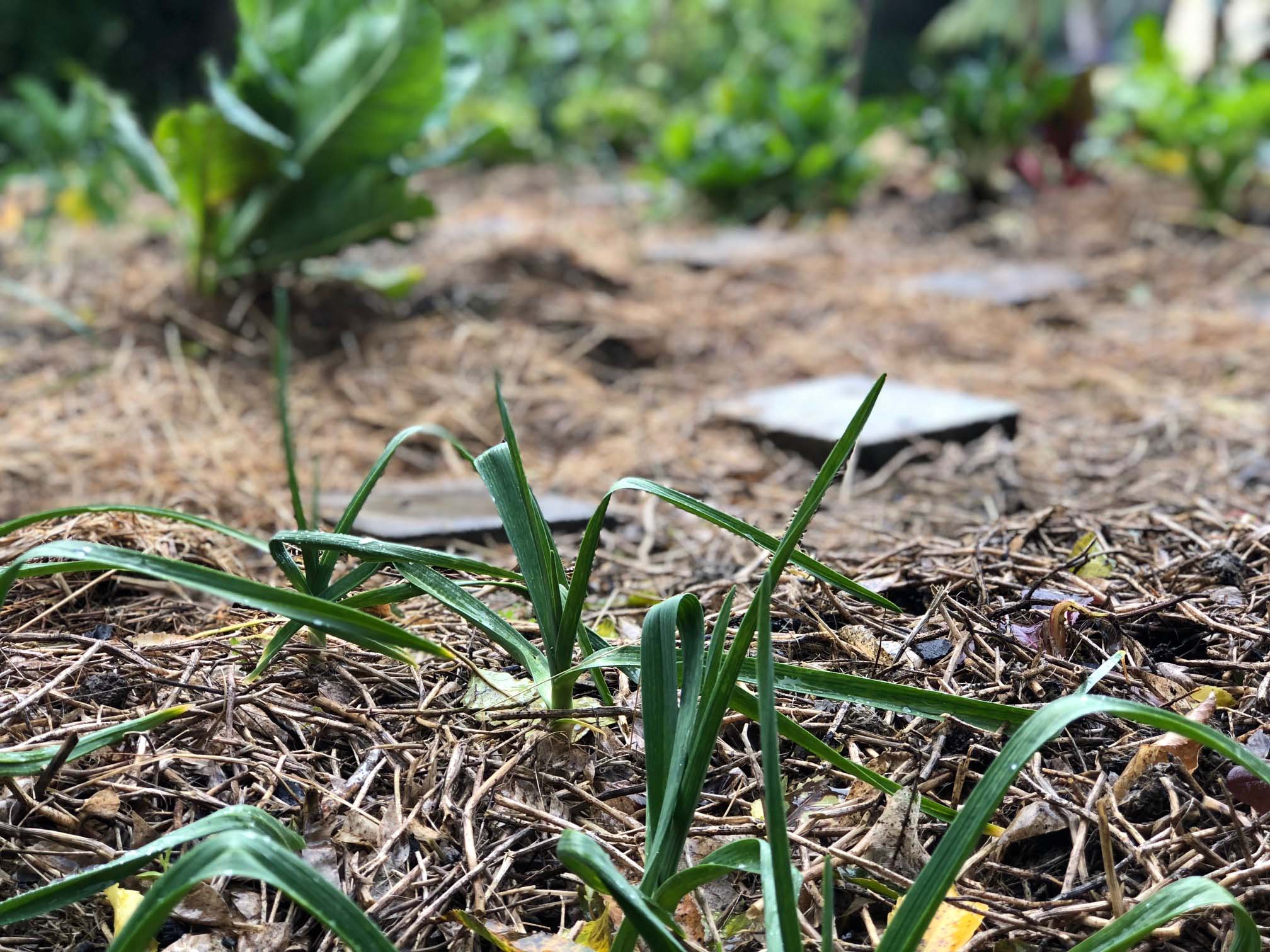 In summer, the lack of sun means it can be a struggle to grow heat-loving crops. I have to find creative spaces and ways to keep them happy. I plant most in the garden but some of my tomato and pepper plants are potted and moved as the sun moves. I start some of my seeds early and keep them in a makeshift glasshouse, which I have built by making a box out of wood with old windows on the top to trap the sun inside. 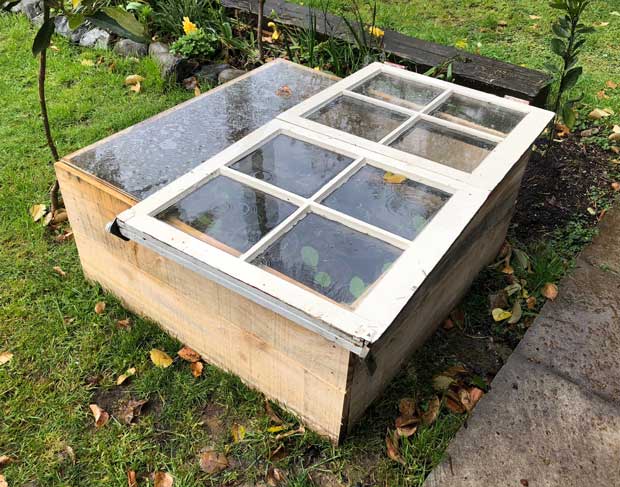 Despite utilizing the entire garden area, space is still an issue and I usually have squash climbing up trees and fences, pumpkins and zucchinis blocking paths and messy tomato forests. It’s a jungle out there in summer and I love it.
Although we have a small area, we have a few fruit trees around the property as they are mainly all of a dwarf variety. We have a dwarf peach, nectarine, orange, mandarin, apple, cherry, lime and lemon. Some are in pots on the deck, some at the top of the garden and some in the front yard near the road. That’s where the makeshift glasshouse is too. My garden is not winning any prizes for being the best-looking, but you can’t say it’s not practical. I love that saying, “Grow food, not lawns”. We are fortunate to have a park that’s a one-minute walk away and a safe cul de sac with a large flat grassed area so my boys have a place to play and kick a ball around. Oh, and that shaded bark area I mentioned at the start? That’s now where our chicken coop lives. 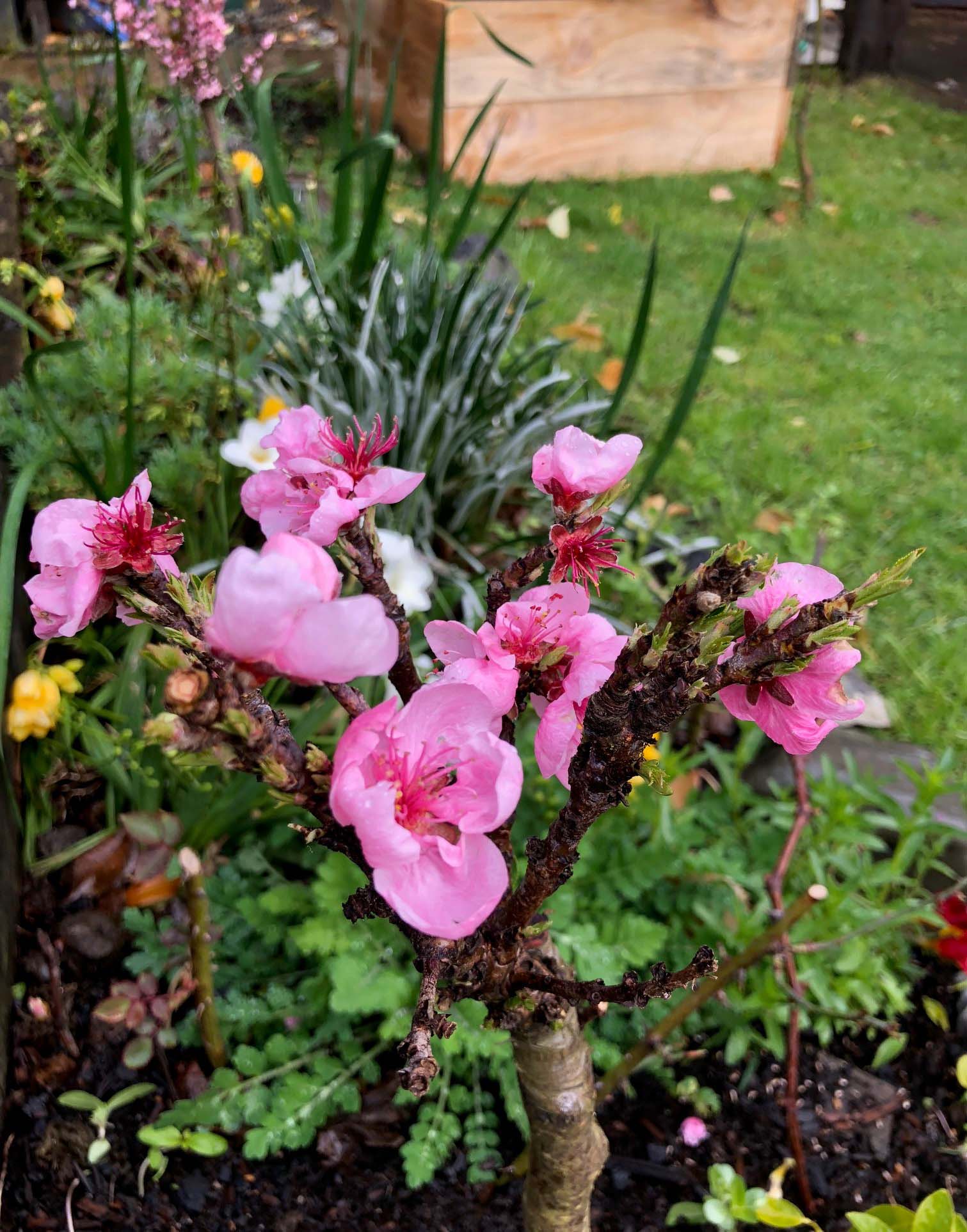 Despite the size, we make it work and a considerable amount of our vegetable consumption is home-grown. I love that my children know where their food comes from and that they show an interest in not only home-grown food but also home-made food. They help me to make bread, pasta and to forage for and preserve any excess fruits and vegetables.

We waste no food in our house; it’s either canned, dehydrated or frozen. If fruit starts to spoil, I’ll make it into vinegar or give it to the chickens. Any vegetable leaves that look too bug-bitten are thrown into the dehydrator (though the oven on a low temp works great too) and blitzed into a green powder to add to smoothies. Anything that’s too far gone goes to the worm farm or compost. I write about my experiences on my blog as a way to share my garden and any seasonal recipes I’m trying out. It’s fun to look back and see the garden change over the years and the seasons. I hope that through my blog and social media I can show people you don’t need a huge section, nor the sunniest section, to be that little bit self-sustainable. There’s a real joy that comes with growing food. It tastes better, it’s better for you and it’s something to be proud of.