Polly Greeks’ Blog: All in a lather


Polly searches for the recipe for success when she gives soap making another shot.

Soap-making’s a piece of cake. That’s what everyone said and the soap-making books confirmed it. All you have to do is mix the ingredients in the right order and leave it to set. It’s as easy as ABC.

And like a collection of cake-recipes, the soap books came filled with glossy photos of luscious bars and creamy slices that looked good enough to eat.
I’ve nibbled at cakes of soap in the past. I know it’s a foolish and unrewarding endeavour, but surely I’m not the only adult who’s been seduced by buttery bars of scented sweetness?

I think it’s the lye that makes soap taste so disappointing. My guide-books changed in tone when referring to this ingredient. Caustic soda, as it’s otherwise known, made them serious and vaguely threatening. One should wear a face-mask around it, some authors urged, along with safety glasses and gloves. Open all windows and doors; beware of burns and never, ever add it into water.

I was nervous when I mixed my first batch. Creeping about the kitchen like some kind of sanitized bandit, in long rubber gloves, dark glasses and a bandana mask, I measured and mixed while the children pressed their noses to the glass door and watched hopefully for explosions. I half-expected one too but instead, everything went just as it should, with the oily mixture thickening like whipped cream as the lye solution poured in.

I didn’t exactly blast my own trumpet when I presented a friend with my efforts, but I did declare a natural affinity for the process. Being the sort of person who leaps at opportunities with the enthusiasm of a rodeo bull-rider, she immediately organized a second session and presented me with a photocopied recipe. A little uneasily, I noted it was classed as “advanced”.

“I think that’s just on account of the beeswax,” she told me with the confidence of a novice. 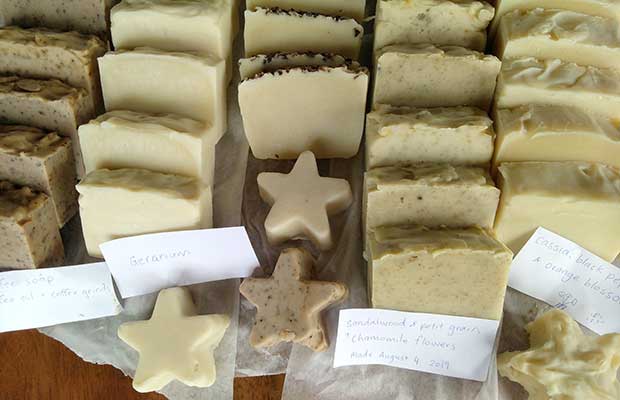 We did away with the face masks immediately. They hampered our chatting. The gloves were annoying and our sunglasses seemed melodramatic now I’d gained a feeling for lye. Mixing the crystals with water, we hurriedly remembered the need for ventilation when the gas made us gasp.

Soap-making’s as easy as baking a cake, but here’s the thing; you have to follow the recipe. Deep in conversation, my friend and I made soap the way I bake; estimating here and improvising there. When the recipe called for an oil I lacked, we just substituted one for another.

On reflection, I’m not noted for my cakes. My children survey their birthday cakes mournfully. Even chickens have been known to size up my rubbery results with suspicion before opting for grit instead.

When our batch of soap failed to set, we added more lye. The next day, in my friend’s absence, I added even more. I slopped in extra oil for good measure. As the splashed mixture prickled and stung my hands, warnings of lye-burns rang true.

The final result was solid but shrunken and dusty, like a withered lady who’s over-powdered her face. I thought it smelled nice but after triggering an asthma attack in a visitor who sniffed a bar, it seemed dangerous to release it into the bathroom. It was time to seek expert advice.

The soap-making course my friend and I attended was run by two cheerful women who began by saying soap-making’s a piece of cake. Any fool can make it, they said. And speaking of fools, they shook their heads at the tale of some idiot who’d tried to eat some.

“I mean, really.” One of the tutors raised her eyes skywards while class members brayed in disbelief.

So you can’t eat soap and nor can you ad-lib during its creation. It’s a science, requiring exact measurements of the right ingredients for saponification to follow. Enlightened and enthused, my friend and I returned to my kitchen and whipped up a further four batches of rich, creamy goodness.

We surveyed the setting results with pride. Made with mostly edible, organic ingredients, our bars are ethically and aesthetically pleasing; free from packaging, palm-kernel oil and environmentally toxic chemicals.

As an unexpected bonus, I feel I’ve gained insight into cake-baking too. If I actually follow a recipe for once, I suspect the process might prove to be a piece of soap.

Polly Greeks’ Blog: An advert for the off-grid lifestyle

DIY: Make your own soap