In an effort to beat a never-ending cold, Polly embraces an extreme athlete’s chilly bathing method.

This winter, our outdoor bathtub is enjoying a renaissance. At least twice daily, James and I trot briskly across the muddy lawn to ease ourselves in for a soak. Lying back in the frigid water, I try to breathe deeply.

It’s not easy when one’s lungs have shrunk to the size of raisins. It’s the coldness which does that. Submerged, my hands and feet start to ache as if concrete’s setting in my veins while around my neck, the water clamps like a choker of ice.

This is our new addiction. While not quite an ice-bath, the temperature of the tub can’t be far above freezing. The trick is to relax in there. It’s a mind-over-matter affair.

I’ve always hated the cold. On the hottest summer days when others perspire feebly from shadows and wail for autumnal relief, I’m the one reveling in the heat. The combination of water and coldness is particularly abhorrent. Just the thought of it chills my marrow. Born with a reptilian constitution, I require heat to get moving. And yet, there I am, almost gleeful each day as I plunge into the Antarctica of our outdoor bath.

If one of the children asks where I am when I’m soaking, the other will reply, “she’s Wim Hoffing”.

Known internationally as the Ice Man, Wim Hof is a Dutch extreme athlete with 20 world records relating to his ability to withstand extreme cold. Famous for swimming under icebergs and for prolonged full-body contact with ice, he runs barefoot marathons in snow and has astonished scientists with the ability to control his body’s autonomic nervous system. He can regulate his body temperature, heart rate, blood pressure and more.

A friend inspired the new obsession. Suffering from a shifting nightmare of ailments that has seen her hospitalized and frequently too exhausted to move from her bed, she’s been diagnosed with Lupis, ME and various other autoimmune diseases over the 15-years of her illness. In constant pain and increasingly desperate, she’s moved through a raft of alternative therapies after prescriptions of Prednasone and other meds failed to bring relief. 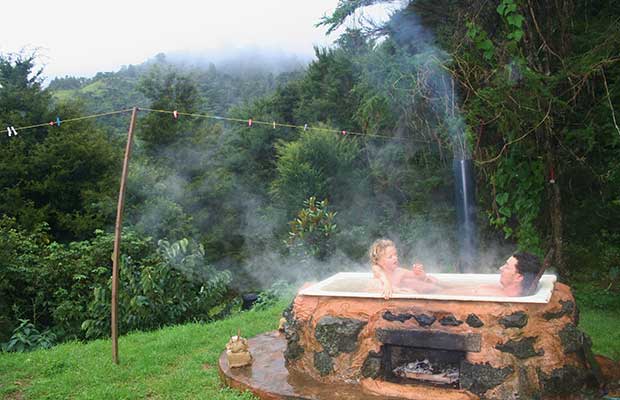 The outdoor bath tub before Polly learned about Wim Hoffing.

She stumbled across Wim Hof on the internet amid glowing testimonies from sufferers of fatigue, rheumatism and Crohns disease.

“There’s this breathing technique I’m going to try.” She wrote in an email to me. “You end with cold water immersion.”

Her emails grew increasingly excited as the weeks passed and her symptoms improved. Her brain fog had reduced. Her energy was rising.

“I’ve been gardening today. I’m getting things done that I’ve only been able to think about for so long.” After an infrequent trip out: “I came home tired and aching as usual but I did my breathing and took my bath and now I’m fine. Normally it takes me several days to recover from town.”

I was on my fourth winter bug of the season and feeling cheated about my health. You’d have thought living within pristine native forest, drinking pure stream-water, eating mostly organic whole foods; ingesting limited sugar and harvesting greens from the garden would’ve set me up with a Rolls Royce kind-of immune system. Yet I seemed to pick up a cold every time we emerged from our valley. High doses of immune-boosting Vitamin C, turmeric and olive leaf extract only seemed to add value to my urine.

I Googled Wim Hoff and discovered he’s never sick. “I’m going to start Hoffing,” I announced to the family. The breathing exercise was simple to learn. Involving short bursts of hyperventilation and breath-holding, it increases carbon dioxide in the blood which is followed by the release of oxygen in our mitochondria. Science says this leads to the release of more energy in our cells. The cold water immersion follows.

It’s hard to feel calm when your body is squeezed in a vice-like grip of freezing water. Everything screams to escape. But after a few episodes of shrieking, I learnt to stop resisting the chill and something extraordinary started to happen. The coldness was still present but it wasn’t me. The calmness I entered was relaxed but sharp-edged. It was like a coffee hit without the caffeine.

Scientists say Hof has learnt to activate the part of his brain that releases opioids and cannabinoids into the body. These components can inhibit the signals that tell your body you’re cold or in pain. Instead, feel-good chemicals dopamine and serotonin are released, triggering a state of euphoria.

‘I’m just nipping out for a Hof,’ James smiles, heading nude to the garden in a roaring southerly. I nod understandingly. Sometimes when I’m in it, the cold is so crazy I laugh out loud. Every time we emerge from the bath, we feel amazing; invigorated and brimming with life.

We’re still novices. Sometimes afterwards, it takes hours to warm up again. We’ve learnt the hard way not to overdo it. James went too far when he lay immersed for 20-minutes. I remained blue-lipped for half a day when I foolishly followed a cold soak with a cold shower. And yet the frigid water keeps calling us back.

The health benefits claimed by the Wim Hof method are long. I’ve committed to a six-month trial. I visited my friend the other day and she looked like a new woman. The long-term rash across her face has vanished, leaving skin pink and healthy. There’s also a spark to her eyes. She feels better than she’s felt in years.

As for me; I haven’t caught a cold since I started hoffing. A long, cold future gleams ahead.