Hawai’i off the beaten track: A blockbuster adventure on Kaua’i island


A cinema-lover discovers a world beyond the familiar attractions of the movie-esque Hawai’ian island of Kaua’i.

It took a chopper ride a kilometre above the Nā Pali coastline to snap me out of my Steven Spielberg-induced delirium. We’d arrived in the Hawai’ian island of Kaua’i two days before we buckled into the Hughes 500 and I’d been driving my partner Andrew bananas humming John Williams’ Jurassic Park film score on rotation. 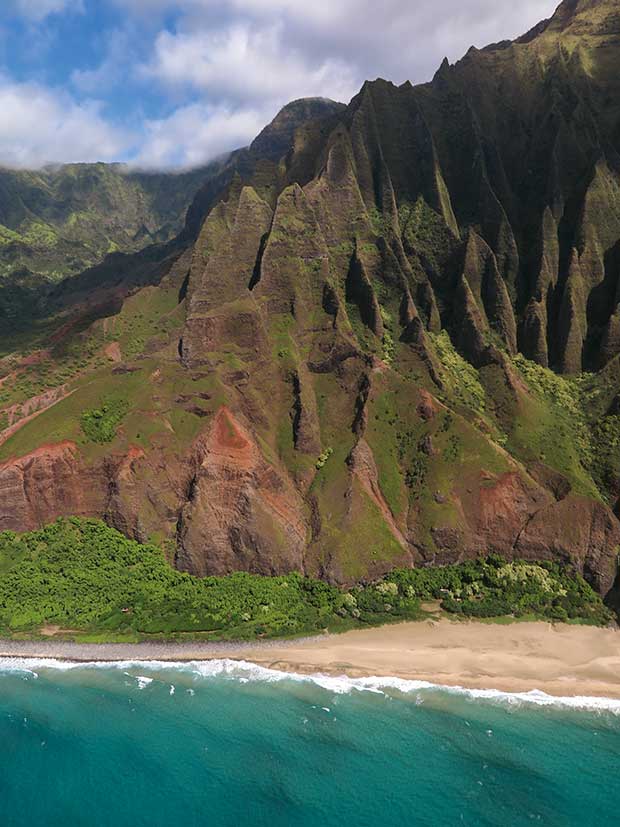 Kaua’i, the smallest and most northern of the four main Hawai’ian islands, is a favourite of film-makers for its lost world-like mountainscape. It’s where Sam Neill stared deep into the iris of a T-rex, where Indiana Jones dodged poison darts in the jungle. It’s King Kong’s rocky habitat and Peter Pan’s Neverland. It felt like there should be a brontosaurus or a pirate walking the plank on every vista. Then I spotted a former James Bond, Pierce Brosnan, collecting his luggage from the carousel of the airport – baggage thoroughly shaken and stirred in his Delta Airlines transit, perhaps? But in the open-air helicopter with the tropical winds blasting my face so that my jowls flapped like a cartoon dog (did I mention there were no doors?), I finally had my reality check. As the appearance of the countryside transitioned from primaeval untouched clifftops to the patchwork squares of plantations and paddocks, Kaua’i’s own story unfolded beneath us beyond Technicolor, even more vibrant than on the big screen.

Tucked away in the Lāwa’i Valley, behind a white sand cove on Kaua’i’s south coast, is a curious formal garden known now as the Allerton Garden. Though today it’s a peaceful place, accessible by a steep road that requires a bus to lick the edges of the cliff, in the 1930s and 1940s the garden was party central. American philanthropist and art-lover Robert Allerton and his companion John Gregg created these wonderfully peculiar grounds, where statues of a mermaid and the Roman goddess Diana rub shoulders with plants from South East Asia and the Pacific. If these moreton bay fig trees at Allerton Garden look familiar it’s because they appeared in the movie Jurassic Park.

The grounds are styled on structured European gardens in a series of themed “rooms”, but the tropical climate means plants grow quickly, sometimes too quickly. It takes an army of gardeners to maintain the property, which includes a golden bamboo grove and a Thanksgiving Room which, in Robert Allerton’s day, would be decked out with all the trimmings every fourth Thursday in November. John was officially the adopted son of Robert but it was well known they were a couple. Guests came from around the world and were allowed to stay on one condition: they wear a costume. Should they not bring one, it would be provided. 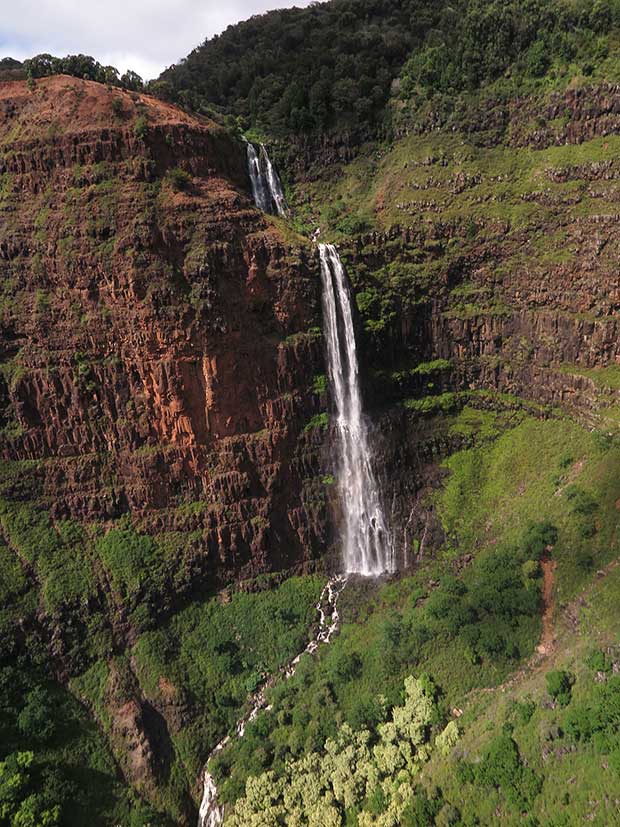 It rains a lot on Kaua’i. Parts of the hinterland receive about 355 days of rain a year, and there are countless waterfalls including the 243-metre Waipoo Falls in Waimea.

The garden and the Allerton homestead are now kept by the non-profit National Tropical Botanical Garden organization, which has the impossible mandate of maintaining the grounds to Allerton’s vague “original vision”, leaving garden director Tobias Koehler second-guessing how much to prune every tree and questioning how tall Allerton intended his plants to grow. The directions for caring for the McBryde Garden, adjacent to the Allerton estate, are much easier to interpret.

More stories you might like:
Whangamata clothing boutique owner Karan Gregory on why you don't need a degree to be a great business owner

The native vegetation was cleared to plant sugarcane in the 1860s, and the grounds are now a conservation park and seed bank of thousands of endangered species. A nursery grows rare plants such as Brighamia insignis, sometimes called cabbage on a stick, not seen in the wild since 2014. Special care is taken for this plant as it’s believed that the one pollinator of the species is extinct now, and the plant must be hand-pollinated. “What we are is a gene bank,” says Tobias. “We are in the business of saving plants.” 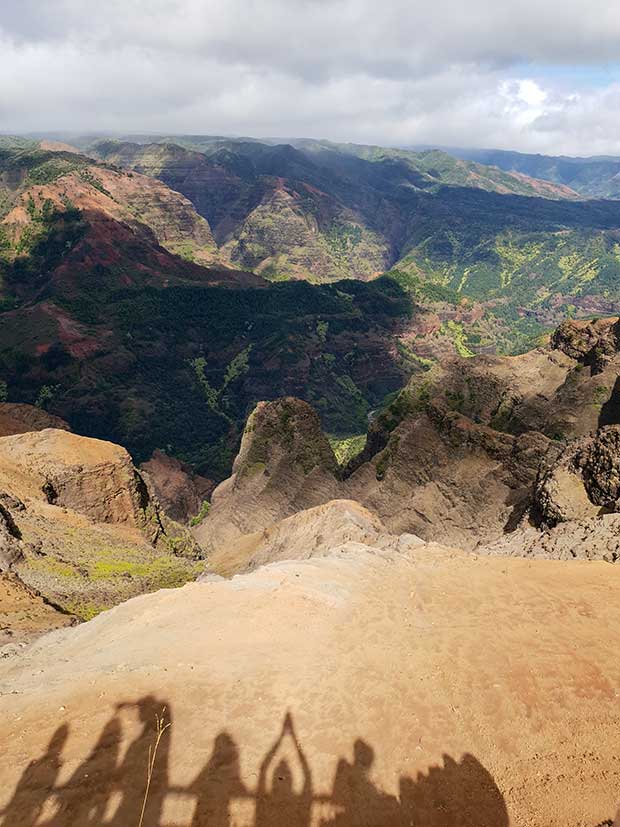 It’s selfie season at the Waimea Valley. This valley, sometimes called the Grand Canyon of the Pacific, is 16 kilometres long and 900 metres deep.

Kaua’i is geologically the oldest island in the Hawai’ian archipelago and, over time, the thrashing surf has pounded the volcanic rock coastline into white sand. But despite having more sandy beaches than any other island in Hawai’i, it has fewer tourists, not that the locals seem to mind. There’s a rule that no building can be taller than a coconut tree (four storeys max), and the island is devoid of the skyscrapers and neon-signed department stores that dominate the skyline of Waikiki Beach in Hawai’i’s capital, Honolulu. 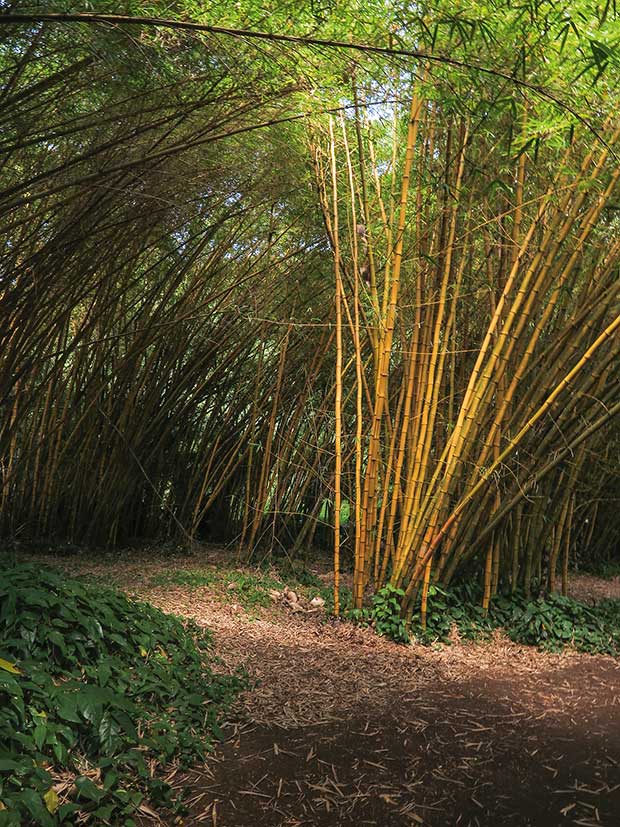 Any gardener who has tried to tame bamboo will appreciate the care that has gone into the bamboo room in Allerton Garden.

Instead, Kaua’i — known as the Garden Island because of its many farms — attracts campers and hikers; there are tents pitched beside the sea. This place has always been a little bit different. Captain James Cook’s landing in the mouth of Kaua’i’s Waimea River in 1778 was the first European contact in Hawai’i. At the time the islands had several different rulers or ali’i, but that would quickly change. In 1795 King Kamehameha I from the southern-most island, Hawai’i (commonly known as the Big Island), set about conquering the northern islands, aided by British weapons.
But King Kaumuali’i, who ruled Kaua’i and neighbouring Niihau Island, would not surrender. People have started rubbing the bottom of the garden’s mermaid sculpture for good luck. The water flows at 52 to 54 pulses per minute with the intention that viewers will relax and let their heartbeat slow to the rhythm of the fountain.

A storm and a measles outbreak thwarted Kamehameha’s efforts to invade. Kaumuali’i eventually ceded to Kamehameha in 1810, but the island never lost its independent spirit. Kaumuali’i’s assistance with building a fort for the Russian American Company in Waimea made many suspicious he was seeking protection from Tsar Alexander I of Russia (Kamehameha quickly took control of the fort, ending Russia’s interests in Hawai’i). “Kaua’i has a very special history” says Chucky Boy Chock, director of the Kaua’i Museum in Lihue. “Every island in Hawai’i has its own type of aloha (love), and we have our own way of doing things here.”

The lotus Nelumbo nucifera planted on Allerton Garden’s perimeter, near a lagoon where parts of the sitcom Gilligan’s Island were shot.

Lydgate Farm certainly has a different way of doing things. The tour of the 18-hectare cacao, vanilla and honey farm in the hills behind Kapa’a starts with a decidedly American gung-ho honey-chugging contest led by enthusiastic Detroit-native Kate. “I went to college for a hot minute, where I spent more time chugging beer than anything else. I’ve just adapted the model for the jungle,” she says.

The tour progresses into the cacao grove. Making chocolate from bean-to-bar takes months. First, cacao pods are plucked from the tree and then beans are extracted, fermented then separated into cocoa solids and cocoa butter before they become chocolate. “Guys, I work at a chocolate farm, this is actually my job. Chocolate does grow on trees,” says Kate, as she passes us all a fresh cacao seed which has a taste a bit like someone has sucked all the joy out of chocolate, but maintains an energy hit like an espresso. The beans contain theobromine which is a natural mood elevator. Life is looking up and is even better when we sample Lydgate Farm’s finished product. 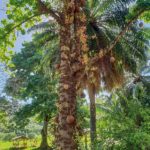 It’s dangerous to stand underneath the cannonball tree (Couroupita guianensis) in the McBryde Garden. 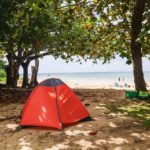 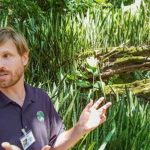 Botanist and seed-saver Tobias Koehler is a conservation superhero. 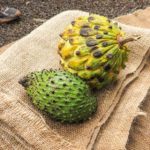 Sampling local fruit — a soursop (on the left, which was delicious) and a rollinia (which tasted like socks) at Lydgate Farm. 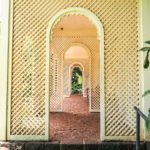 An entranceway in the Diana Room at Allerton. 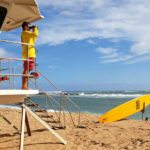 A lifeguard watches out for swimmers in the rips at Salt Pond Beach Park near Hanapēpē. 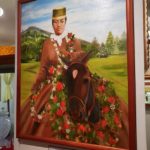 A painting of Queen Emma, queen consort of King Kamehameha IV and a lifelong friend of Queen Victoria. Queen Emma’s holiday cottage sits adjacent to the Allerton Garden under the purple bougainvillea that she planted.

“Cacao is what keeps me looking young,” says our host. “Also, I’m only 22, but cacao does make me 10 times funnier – that’s science, people.” The farm is run by Will Lydgate whose great-great-grandfather, William Ludgate (the spelling changed over time) was one of Kaua’i’s first sugar and pineapple plantation owners, arriving on the island from the United States in the 1860s.

The bottom fell out of the Kaua’i sugar industry in the 1990s and 2000s, and Will switched to growing value-added products such as cacao, vanilla and honey in 2017 using organic methods. “It’s a bit of an experiment, but it seems to be working. It’s a new agricultural model here on Kaua’i, but things have changed. People want to see where their food is grown and to buy things on their travels that mean something.”

The credits close on our holiday, and we reflect that while it wasn’t filled with the dino drama of a blockbuster, we discovered a lot off-script in Kaua’i while still enjoying the epic backdrops beloved by the movie greats. 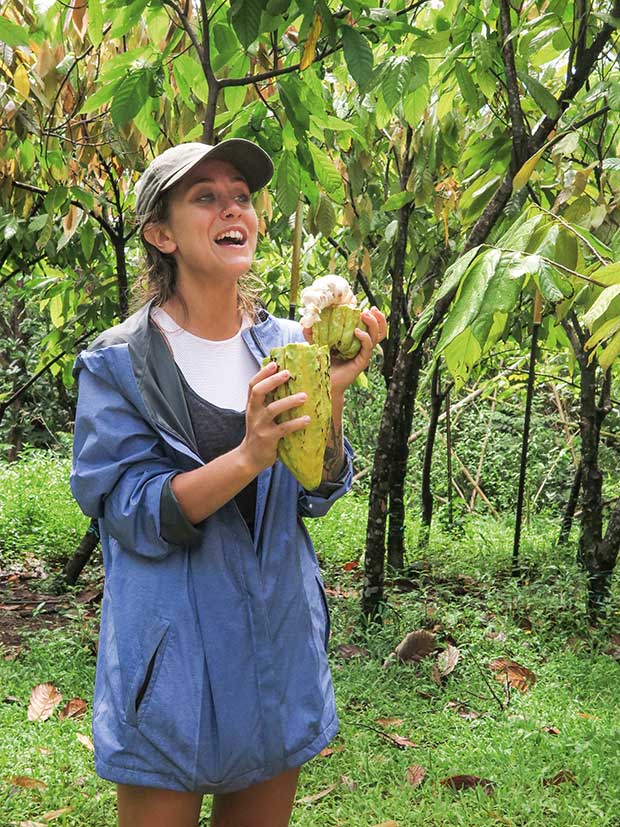 Kate at Lydgate Farm cracks a smile while breaking open a cacao pod.

GET TO KNOW THE ISLAND:

Kaua’i is green for a reason. Mount Wai’ale’ale in the hinterland is the wettest place on earth, averaging 1232 centimetres of rain per year. When choosing accommodation, bear in mind that the northern part of the island (including the towns of Princeville and Hanalei) is the rainiest area. There are 80 kilometres of white-sand coastline, much of it patrolled due to dangerous currents and rips. 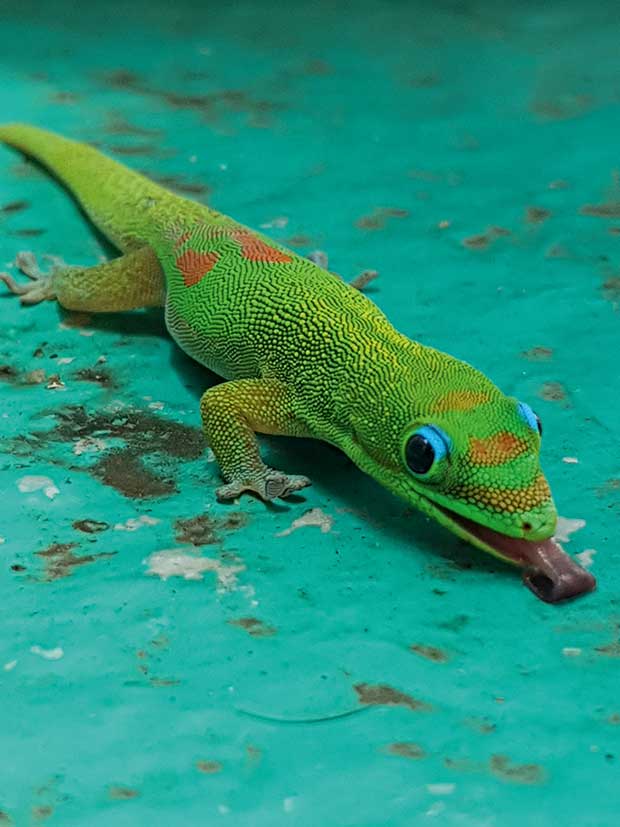 Gold dust day gecko catches some sun outside a café in Kapa‘a.

A rental car is essential. There are highways three-quarters of the way around the 1380-square-kilometre island, with roads ending at Nā Pali Coast State Park on the western side, which is only accessible via hiking trail or helicopter.

The Nā Pali coast is best seen from a helicopter. Jack Harter Helicopters is one of only two operators to offer the thrilling doors-off experience.  Prefer to stay on the ground? There are several multi-day hiking tracks through the Nā Pali State Park, but permits are required. Alternatively, it’s an easy drive to the Waimea Canyon in the south. 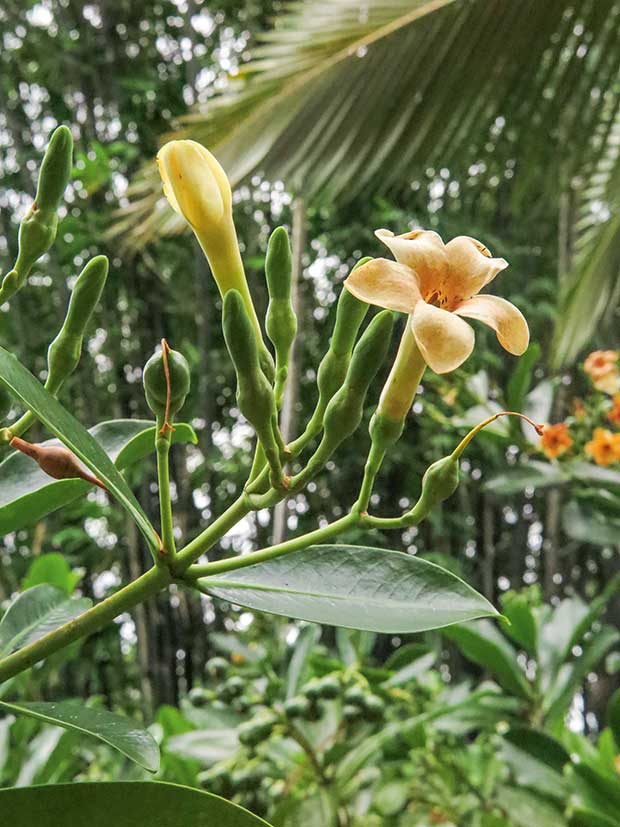 A puakenikeni, a native Hawaiian flowering shrub, at Lydgate Farm.

Try the local produce, especially the juicy white-flesh pineapples worth sampling at one of the many farmers’ markets. Locals say the Kaua’i Community College Market in Lihue has the best range; Sam’s Ocean View Restaurant and Bar in Kapa’a, where ahi poke nachos and wild boar sausage share plates; Java Kai in Kapa’a which roasts its own coffee beans grown on the island; a coffee is best drunk and dunked with a coconut crisp biscuit from Ko Bakery. 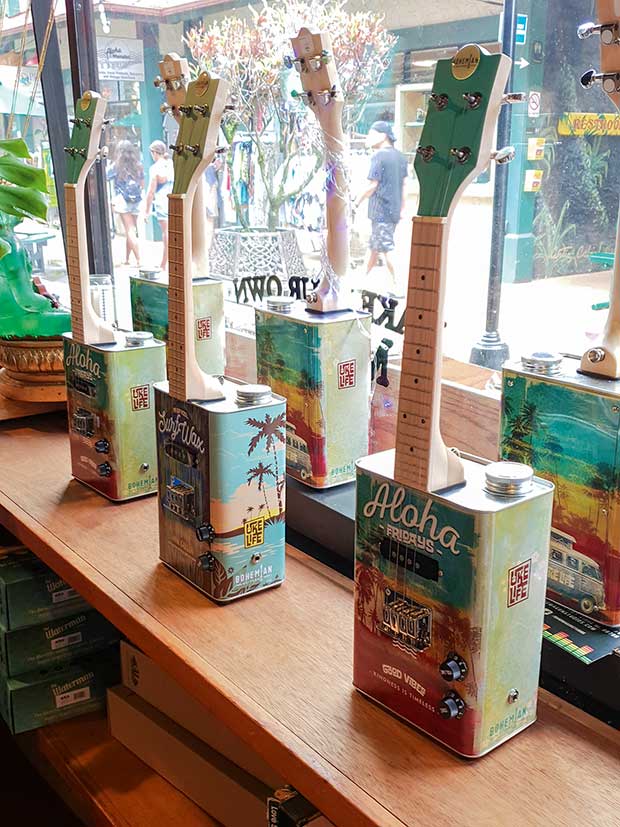 Kaua’i is famous for its salt. Visit the Salty Wahine factory near the Hanapēpē Salt Ponds; also in Hanapēpē is the Talk Story Bookstore, a second-hand shop filled with unusual treasures, and the owners will ship to New Zealand; Hanalei Strings n Things sells colourful ukuleles that are as cute as a button.