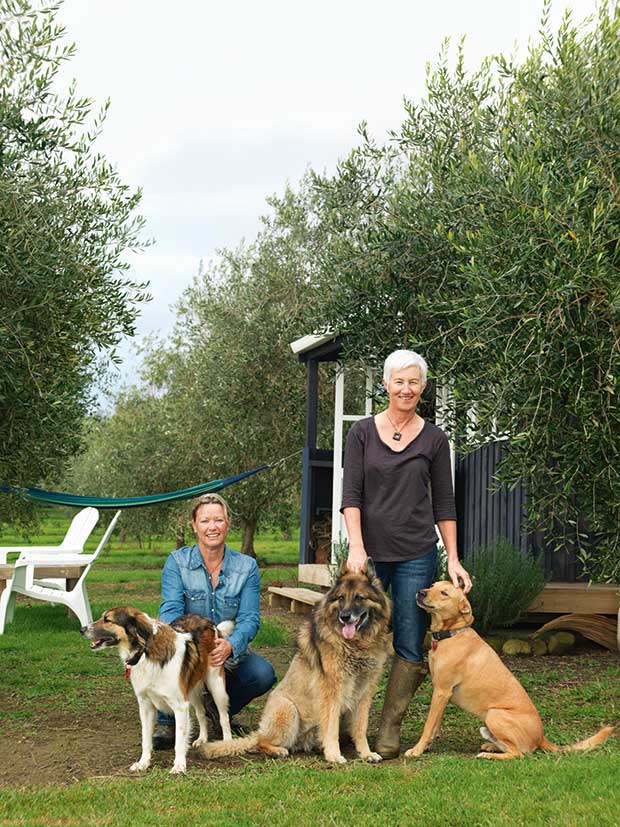 Brooke and Maggie Noonan left jobs at Auckland Zoo to build an off-grid, eco-friendly house in the Far North. And they struck oil.

Elephants never forget, and it’s equally difficult to forget an elephant, particularly one that fancied a wander through Auckland’s Western Springs park.

On the return walk to her enclosure at the adjacent Auckland Zoo, words were exchanged between Burma the Asian elephant and keeper Brooke Noonan. After all, the incident which involved the elephant using a log to deactivate an electric fence, had brought Auckland traffic to a standstill. 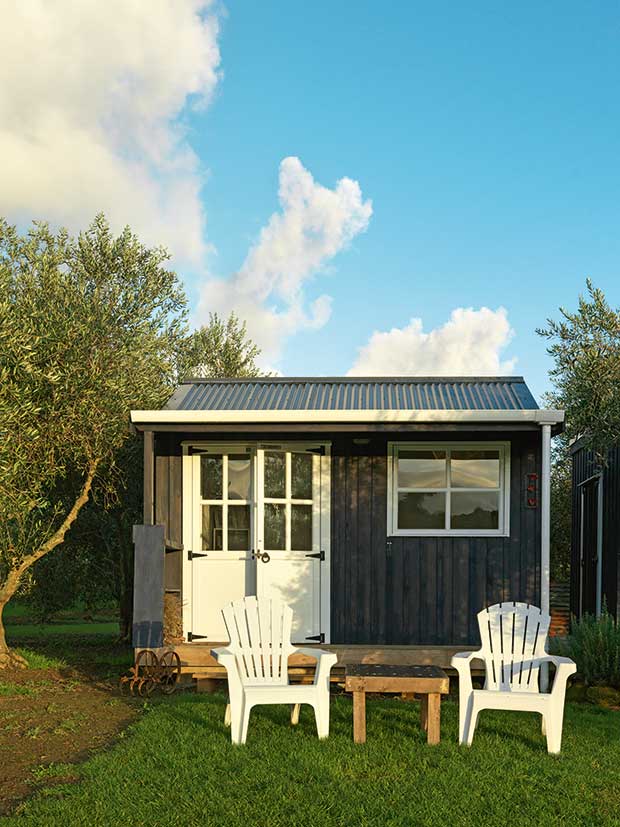 Brooke and Maggie’s glamping venture The River Bothy sits in the middle of their olive grove and overlooks the Oruaiti River.

Sometimes humans are just as unpredictable (we’re all mammals, after all), as Brooke and her wife Maggie will testify. They are accidental Northlanders, unexpected olive growers and unplanned international dog adopters.

The couple hadn’t intended moving to Mangonui, a small fishing village in Doubtless Bay, near the tippy top of the North Island. They also hadn’t expected to bring home Niue, a malnourished stray dog with ribs akimbo from the Pacific island of the same name in 2015.

They fell in love with the flea-ridden pooch while overseeing the care of another elephant. Anjalee, Auckland Zoo’s newest (teenage) Asian elephant, was on a three-month quarantine pit stop in Niue. 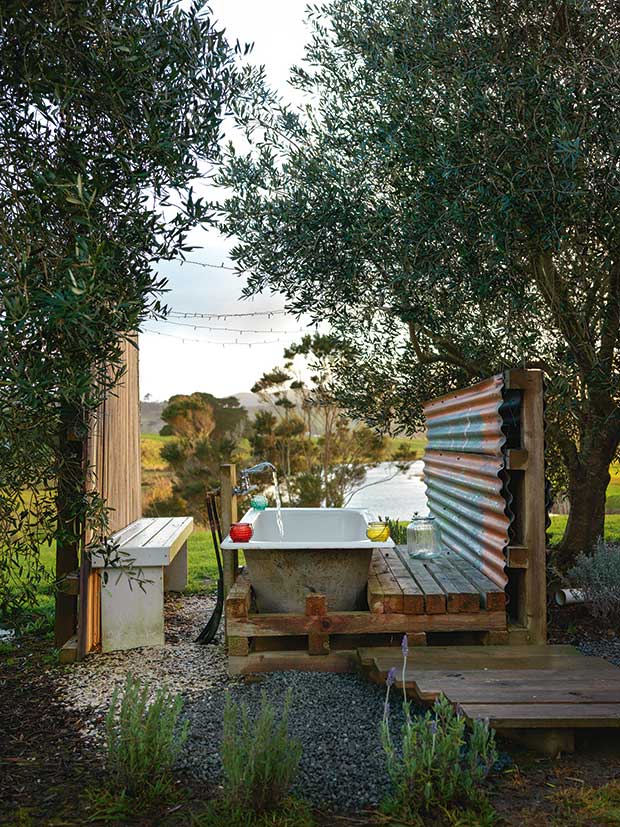 Bothy is the Scottish word for a farm hut, but a shepherd would be lucky to bathe under the stars in such a glam outdoor tub.

In 2015, Anjalee’s safe immigration from Sri Lanka was a career highlight for Brooke even though at this point she and Maggie, who also worked at the zoo but in sales and customer service, were plotting their own migration.

They had lived in Warkworth for five years, aspiring to a semi-rural lifestyle but instead spent three hours a day, bumper-to-bumper, getting to and from work. It had them beat.

“We loved our jobs and had put our all into them, but there wasn’t much of us left over afterward. We were spent,” says Maggie. 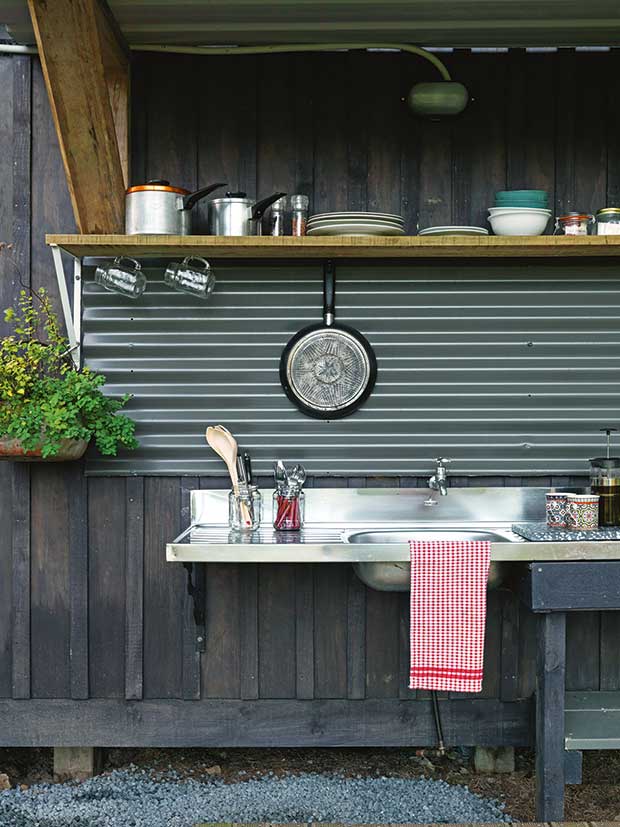 Maggie had worked in the fitness industry before her 12 years at the zoo. But the wildlife enclosure was all Brooke knew.

More stories you might like:
Meet the Wānaka ice-cream makers churning out homegrown (and award-winning) boysenberry ice cream

In 1995, she started as an elephant keeper for the much-loved Kashin, for more than three decades the zoo’s grand old lady, and the model for the kids’ money box. Brooke says Kashin had grace and humour and taught her empathy and not to take
things seriously. 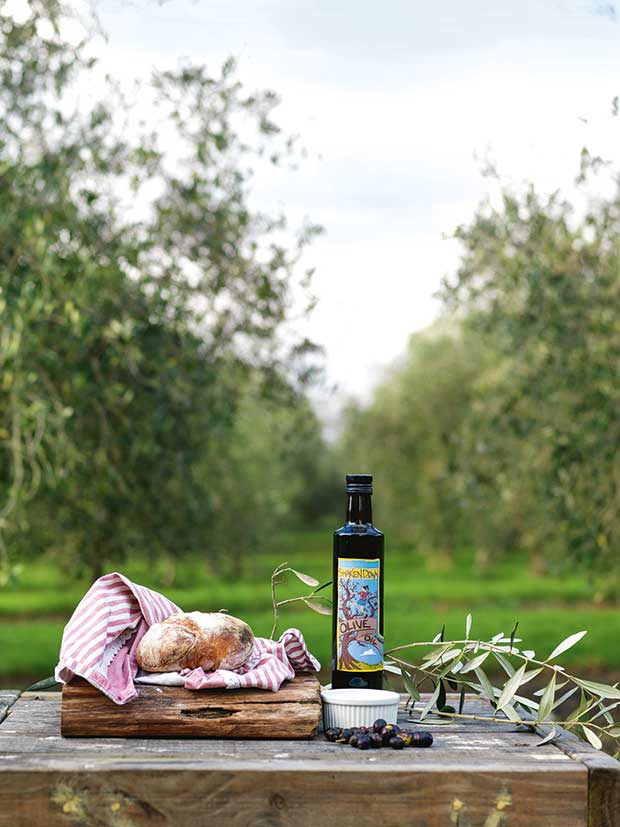 “They are such a big animal, incredibly intelligent and have emotions like we do. After a while, I stopped seeing Kashin’s size and saw the personality.”

Brooke worked her way up to the senior role of curator of mammals. She was part of the executive team making the hard but kindest and most humane decisions, including the very difficult one in 2009 to euthanize elderly arthritis-ridden Kashin, who also had other irreversible chronic medical conditions.

But where do you go when there’s only one job you know and only one zoo in the world where you want to work?

“Leaving Auckland also meant leaving behind a career and a big part of my identity,” says Brooke. “We also knew we had to make a living somehow, and we weren’t sure how. I do miss the animals, but somehow it was less scary to jump into the unknown than to stay in the known.”

Maggie says the decision was about reclaiming freedom. “We wanted to spend more time with each other, our dogs and to be our own bosses – we just hadn’t figured out what we were the bosses of yet.”

They searched for months for a patch of land on which to build a sustainable home with a separate accommodation business. They looked as far south as Central Otago, thinking they’d like to live somewhere with four distinct seasons, closer in climate to Maggie’s Scottish homeland.

However, the morning mist that creeps down Mangonui’s Oruaiti River can be bewitching – or perhaps it was just the hocus pocus of the real estate agent? – and the couple fell hard for the winterless north. They looked at some land on a Friday and signed papers on a Sunday.

“My first thought was ‘the dogs are going to love that river’. My second was, ‘Oh wait, there are olives. That’s going to be interesting,’” says Brooke. The house was fabricated with structural insulated panels (SIPs), and other smart features include RibRaft energy efficient concrete and double glazing. As a result it’s toasty in winter and cool in summer.

What did the couple know of olives? “Zip, zilch, nada, nought.”

But there were 491 olives trees to look after and, worst of all, it was a fruiting year. “We were going to have to figure out how to harvest the bloody things,” says Brooke. Hand-picking? Surely not? The birds were hovering.

By chance, up the road they spotted a man with a machine shaking olives from the trees. A quick cooee and a smile later (Maggie working her Scottish charm), and he was down on their property rattling their trees. Alakazam, the trees were harvested within a day. 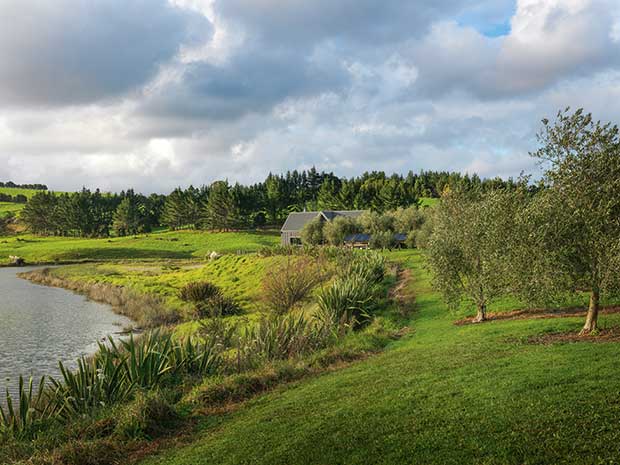 That man turned out to be Andrew Taylor, former president of Olive New Zealand and local olive guru. He told Maggie and Brooke everything they needed to know about pressing their 10 tonnes of olives. From that first harvest – a yield of 1000 litres – they covered costs.

It was clear they couldn’t live off the good oil; diversifying their income would be necessary. They found two alternative ways to earn a crust: they started a caretaking and holiday-house property management business and, at the end of the olive grove, they built a guest cottage for holiday accommodation. The couple start their day with coffee from Tiger Mountain in Kaeo and Maggie, a good Scott, is famous for her porridge. She says a pinch of salt is key.

It’s called The River Bothy, “bothy” being the Scottish word for a farm hut.

Guests come to the bothy to spend a lot of time doing little. Many also choose to have a peek at Maggie and Brooke’s own home. The 95-square-metre, 100 per cent off-grid eco-friendly house is built of SIPs, or structural insulated building panels. It is the first SIPs house north of Auckland’s Northcote. “We’ve downsized and cut back on many things to be closer to nature and to have a home with a smaller footprint. Many of our guests are interested in doing the same, so we let them look around,” says Maggie.

The twosome is energy-self-sufficient thanks to 12 solar panels (see above). “When you know energy isn’t an absolute given, it makes you appreciate it more,” says Brooke. 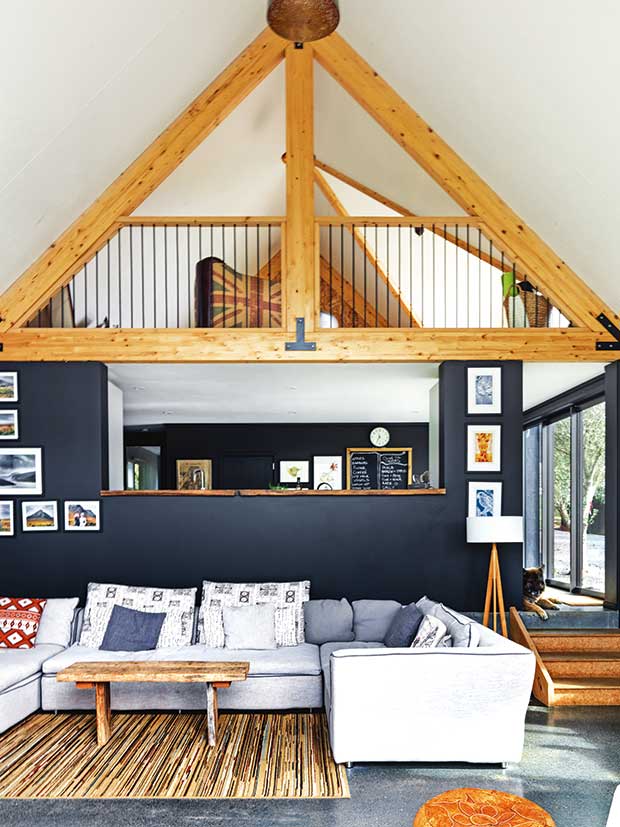 Brooke and Maggie use their mezzanine for yoga. The room also doubles as a second guest bedroom.

“We will look at the weather forecast, and if we have a week of rain coming up we may not use the oven, which uses a lot of energy. It’s just thinking a bit smarter. It feels okay to let yourself be dictated to by nature.”

One year into their adventure, they’ve spent $355,000 on their house build (including solar $35,000 and garage $15,000) and they’ve set themselves up for a simple and exciting life. “Money isn’t our driver. We have shelter, safety, our beautiful dogs – all the things we love.”

Maggie and Brooke grow frantoio or J5 olives, a top-producing commercial variety that is disease-resistant and well-adapted to Northland. Their Shaken Down Olive Oil is certified as extra virgin.

To qualify for certification, the oil must contain less than 0.5 per cent oleic acid, meet bottling and label standards, and must be approved by a panel for its fruitiness. 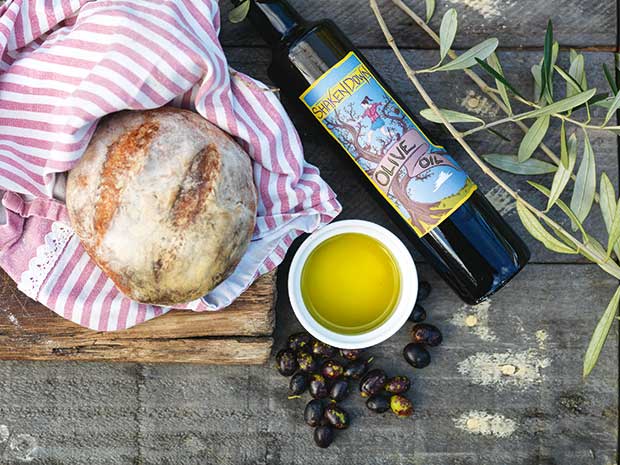 Olive harvesting is all about the sun. Wet weather will change the percentage of water in the crop; if it’s too wet there will be more water and less yield (and less money).

Brooke and Maggie press and bottle their olives at Olivado in Waipapa, sell some of their oil back to the production plant, and retain a small quantity for private sale.

FIRE UP THE SUN

The system cost $35,000; it would have cost a similar amount for cables to connect the property to the grid.

Maggie and Brooke were inspired to use SIPS (Structural Insulated Panels) after watching an episode of Grand Designs. 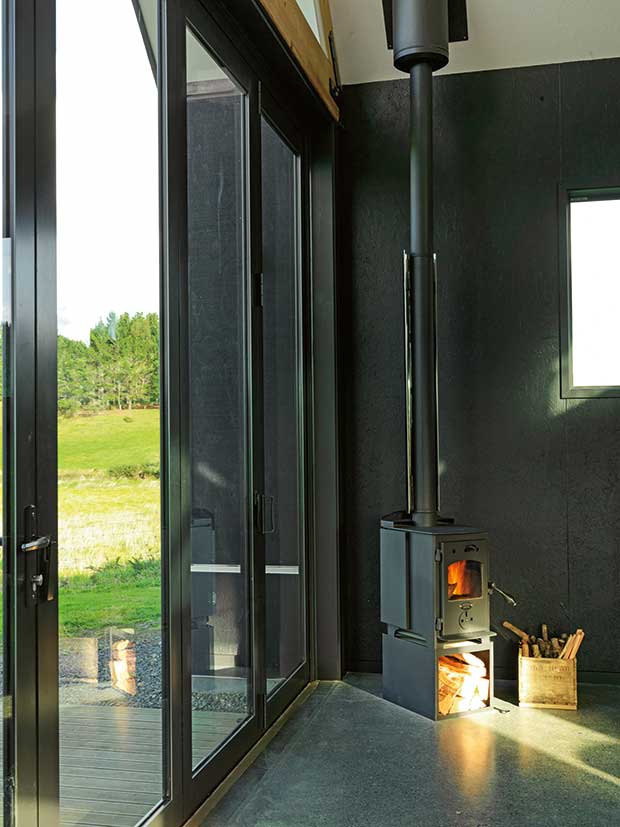 One of the advantages of SIPs is the roof panels can be painted before they are hoisted into place; the fireplace from Wagener Stoves is small but heats the home in minutes.

Maggie and Brooke’s home is so well-insulated, it requires little energy to heat it to a comfortable temperature.

SIPs are structurally self-sufficient, with the same structural principles of an I-beam (a load-bearing I-shaped beam). The 45-degree pitch roof of the couple’s home requires fewer structural trusses than if the house were a traditional build.