New Plymouth photographer Tania Niwa descends from the ancient Kāhui Maunga people, who lived at the mouth of the Awa Hangataahua (Stony River) near Mount Taranaki, which is where she is standing today. Photo by Jane Dove Juneau.

This photographer believes a picture does much more than paint 1000 words. An evocative portrait can help people heal from a painful past — and garner strength for a brighter future.

“It was like magic,” recalls Tania Niwa of the moment as a toddler she witnessed a black-and-white portrait emerge from a blank sheet of paper. Under the crimson light of her father’s makeshift darkroom, wisps of black and grey materialized before her eyes.

In a way, Tania has dedicated much of her life to recreating such magic — no darkroom necessary. “A photo has the potential to take you to another realm within your imagination and also ignite curiosity and intrigue. It has the power to leave you in a different emotional state,” says the New Plymouth-based photographer.

Now an internationally recognized photographer, Tania uses her lens to fill the hearts and homes of her Taranaki whānau. Today, at the base of Te Rere o Noke/Dawson Falls near Mount Taranaki, a woman wearing a moko kauae stands before her. She is one of 18 wāhine to be captured for Tania’s most significant commission, to provide Tū Tama Wāhine o Taranaki with portraits that capture physical symbols of cultural resistance. Light for photography is often better at sunrise and sunset, which requires Tania to work well outside of the nine-to-five norm. It was a calm and unusually warm evening at Onuku Taipari (in New Plymouth) when she photographed Hinehau Millard for the Pūkauae series. Supplied by Tania Niwa.

“Māori didn’t grow up having many female role models in the mainstream media. This series gives our younger generation something to be inspired by — for the children and grandchildren of these women to be really proud. It’s helping us heal and move forward after colonization,” she says.

It is not the first time that Tania, who identifies with Taranaki, Te Ātiawa and Ngāruahine iwi, has fused her Māori heritage with art. As a schoolgirl growing up in Waitara, a coastal town 15 kilometres north of New Plymouth, she spent hours sketching the whakairo (carvings) at Ōwae Marae.

“That planted the seed,” she says. “I wanted to incorporate a cultural narrative in my photography that would be meaningful.”

It can take some people an entire lifetime to determine their life’s work. That was never the case for Tania. While teenagers in Waitara were, well, being teenagers, Tania was contributing to the local community newspaper and striking up friendships with the press photographers at the Taranaki Daily News. She dreamed of becoming a press photographer and went on to study photography at Waikato Polytechnic in Hamilton. But when she graduated, the Taranaki Daily News wasn’t hiring. 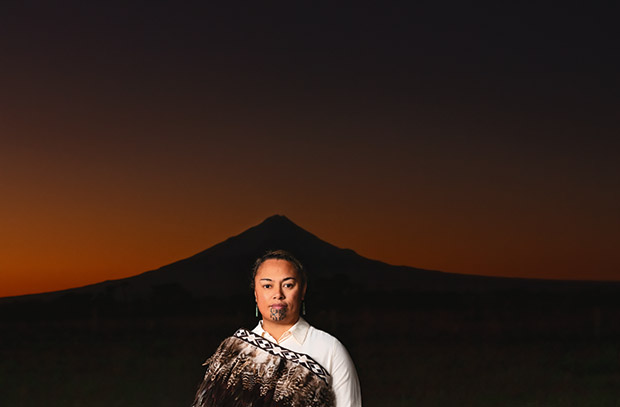 Te Aorangi Dillon, another wāhine featured in Pūkauae, describes her moko kauae (or pūkauae) as ever-evolving. “Pūkauae is fluid. She moves with me. I move with her. We grow together. As time goes on, the kōrero [discussion] around her changes but not the original hiahia [desire],” says Te Aorangi. Photo by Tania Niwa. © Tū Tama Wāhine o Taranaki Inc.

Sometimes, a stumble can turn into momentum. Though Tania hadn’t initially set out to become a fine-art photographer, fate had its way when she landed a job with renowned New Plymouth photographer John Crawford.

She loved every minute of working with John, an out-of-the-box boss (“a real character”) who shared her passion for excellent craftsmanship. “Average or mediocre was never going to cut it with John,” says Tania. When the Taranaki Daily News offered her a job six months later, she passed and stayed with John.

More stories you might like:
How a terrier called Dunhill helped Angela Beer get her groove back

Moving to Sydney a few years later had little to do with bolstering her CV. For Tania, then in her 20s, it was an OE of a lifetime. “I had friends and whānau from Waitara on the Northern Beaches of Sydney. The Kiwi community was social and looked after each other — they were like an extended family.”

She would remain in Sydney for the next two decades, slowly building her portfolio and professional reputation. Eventually, her work would be recognized in Australasia and overseas, with clients ranging from architects and corporates to families seeking fine-art portraits. Still, there were plenty of grueling days getting there. Perhaps even years. 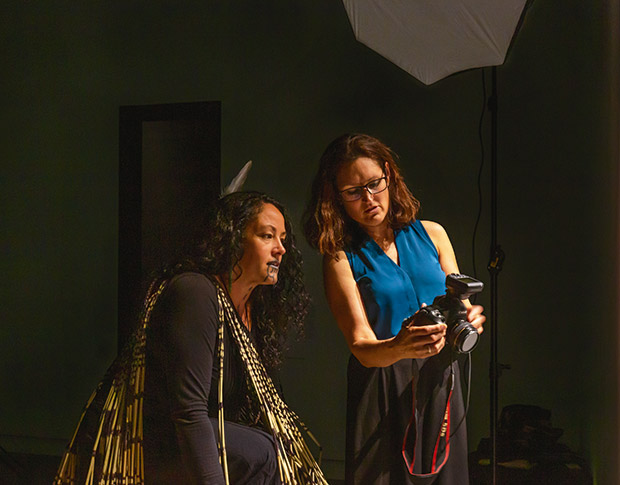 Tania finds that learning about her subject’s whānau, hapū and iwi affiliations, as well as exchanging her own, helps build trust before a shoot. “It takes a certain amount of vulnerability for a subject to allow their invisible barriers to fall away. Once trust is gained and our spirits connect, this is when I can capture something very special and ancestral.” Photo by Dominika Zielinska.

As an assistant on photo shoots in China, Indonesia, Australia and the United States, she lugged 150 kilogrammes of equipment between assignments. When she struck out on her own, she worked two jobs; customer service during the day, taking portraits each evening. “I’d work on photo orders until 1am and then start again at 8am the next day. How did I do it? No idea,” she says.

As her client list grew, so did her staff. Tania once had assistants, graphic designers, admin and production staff — seven employees in total — who helped keep the wheels of her business running. Having a talented team also made it gut-wrenching when, on the cusp of the Global Financial Crisis in 2007, Tania’s empire came crashing down.

“I remember being in Las Vegas and calling the studio to hear there were three cancellations for the following week, which was unusual. Within a month, business plummeted before the recession was officially announced. I had to lay off all my staff and even get rid of my premises, where I had lived for 15 years. 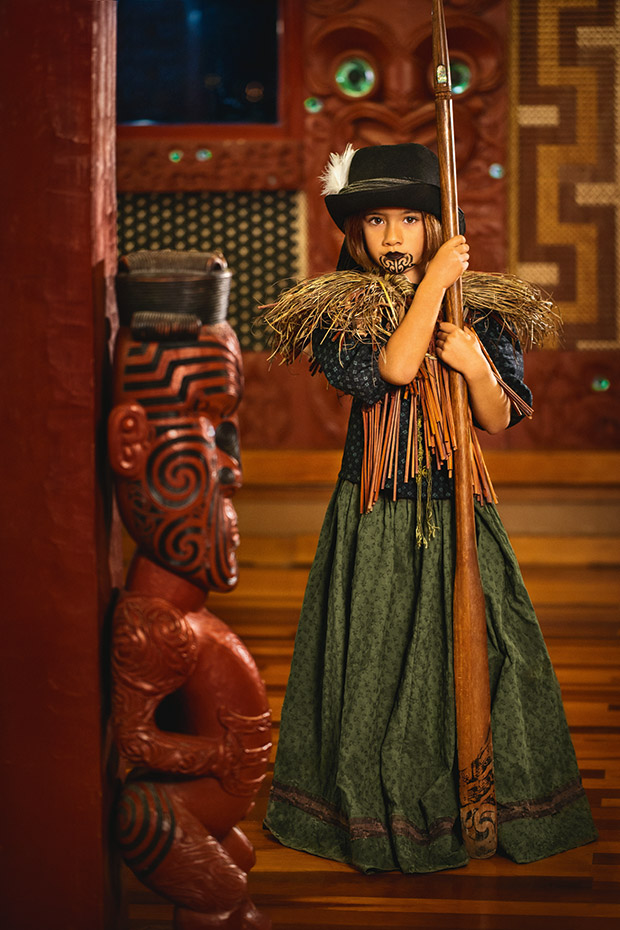 “It was emotionally difficult to have nothing suddenly — well, other than my credibility. I felt wounded and couldn’t do anything creatively for a few years. In saying that, I think there’s always a silver lining. You’re forced to do things more economically, and you come back doing things a lot smarter.”

More stories you might like:
New Zealand artist Clare Reilly paints scenes of calmness through life's ups and downs

Hitting rock bottom profoundly changed Tania. She began to find solace and inspiration beyond her home in Sydney and across the Tasman Sea. Frequent trips to Auckland, Wellington and New Plymouth laid the groundwork for one of her most significant personal works, Mana Wāhine, which captured female artists from Te Ātiawa and Taranaki iwi. She took photos of paintings by her mentor and prominent Māori artist, Darcy Nicholas QSO, and used them as a backdrop for each Mana Wāhine portrait. Tania’s creativity was back and in a big way.

In 2012, the 41-year-old was named the youngest female in Australia to earn the prestigious Grand Master of Photography title, which can take some a lifetime to achieve. Looking back, Tania admits it was the pull of Taranaki that revived her creativity. In 2015, she couldn’t deny it any longer. So, after 23 years of living offshore, Tania was finally coming home. 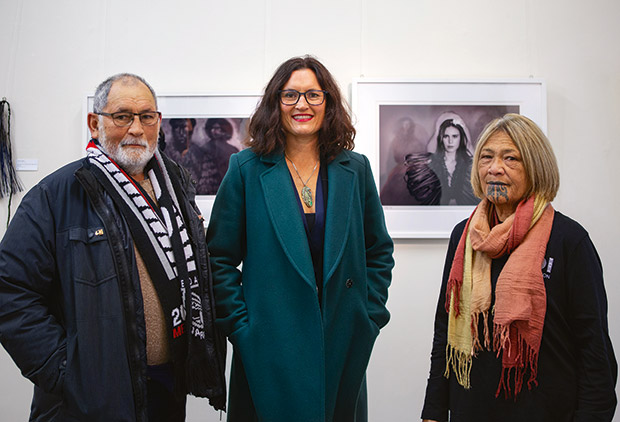 She has her sights set high — and in the case of her next project, quite literally. This summer, she plans a series of nocturnal landscapes, visually connecting Mount Taranaki, its rivers, and the stars that once guided her ancestors.

“The mountain is the centre of our universe in Taranaki. Reconnecting with taiao [the natural world] can help many of us heal from colonization — when our families were disempowered, disrespected, and left in deficit. Having just turned 50, it is just recently that I feel with deep certainty my purpose is contributing to the collective process of healing to move us forward.”

In 2019, Tū Tama Wāhine o Taranaki, an indigenous healing and development organization led by Taranaki Māori women, commissioned Tania to create a collection of expressive portraits for the organization’s 30th anniversary. The intention for Pūkauae was to tell stories of local wāhine connected to the organization, who now carry moko kauae — the physical manifestations of their whakapapa, identity, and mana. 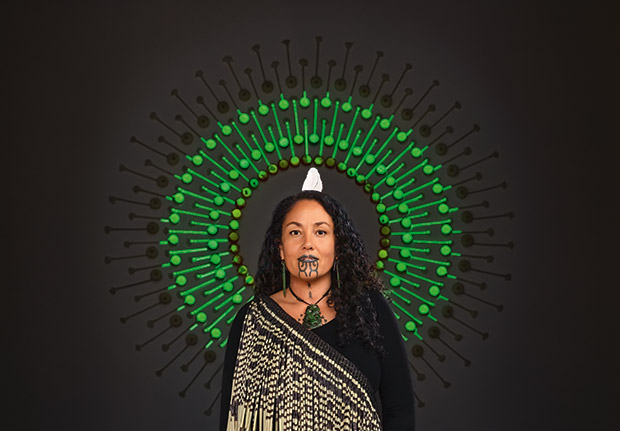 Ngahina Hohaia, a contemporary multimedia artist, and subject in the Pūkauae series for Tū Tama Wāhine o Taranaki, was the youngest woman in Taranaki carrying moko kauae more than 13 years ago. “There was still the look of ‘who do you think you are?’” says Ngahina, who stands in front of her multimedia poi installation. “Now there are many young women with their kauae in our rohe [region]”. Photo by Tania Niwa. © Tū Tama Wāhine o Taranaki Inc.

Spending hours with each woman was significant for Tania, who returned to Aotearoa the year before the project was commissioned.

“Each woman is a ‘tohunga’, an expert in her respective field, and has dedicated her life to empowering others to create a peaceful and prosperous community,” says Tania. “From a spiritual perspective, I wasn’t just photographing individual women. Each portrait represents and reflects on a long line of ancestors who played a role in restoring equilibrium within our society.” tutamawahine.org.nz

At home with Tāme Iti: Explore the vegetable gardens, sunflowers and art studio of a Tūhoe activist