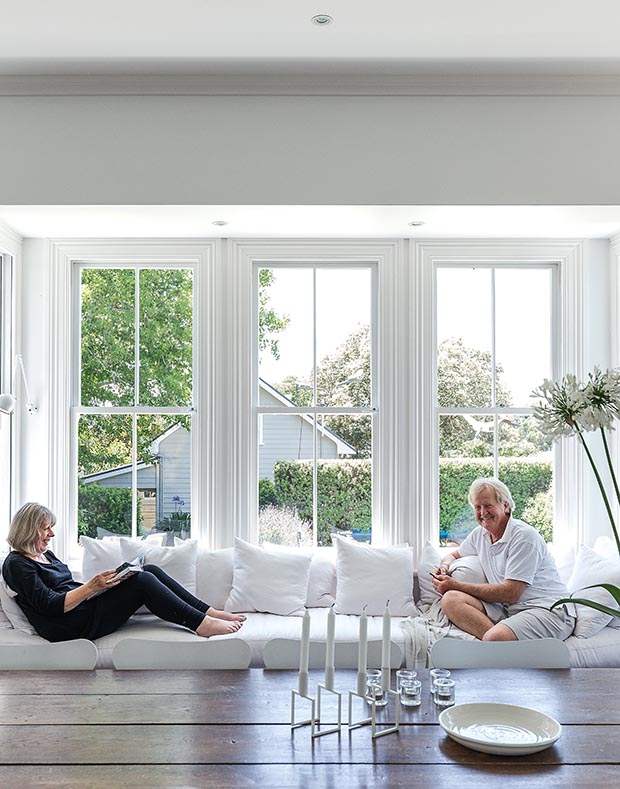 After years overseas, an Auckland couple has created an urban oasis on home soil in a house they have lived in twice.

Maureen-Ann and Kelly Farrimond are thankful they didn’t have to choose which of their two children got the axe.

When they moved into their first home in the 1970s, an old villa in Birkenhead with a generous backyard, their fingers were far from green. They had romantic notions of planting two liquidambar trees side by side in their Birkenhead backyard, one for each of their children, daughter Jo and son Jason. But the couple hadn’t realized the sibling saplings would grow into hulking trunks, wrestling each other beneath the earth.

One of the liquidambars was eventually given the chop by the woman who bought the Birkenhead house after the Farrimonds.

After four years in the villa, the family had moved to Sydney when Kelly was offered a role managing a top global advertising agency. In Australia, the family lived like renovation vagabonds, doing up and selling six homes in 20 years while living in both Sydney and Melbourne. 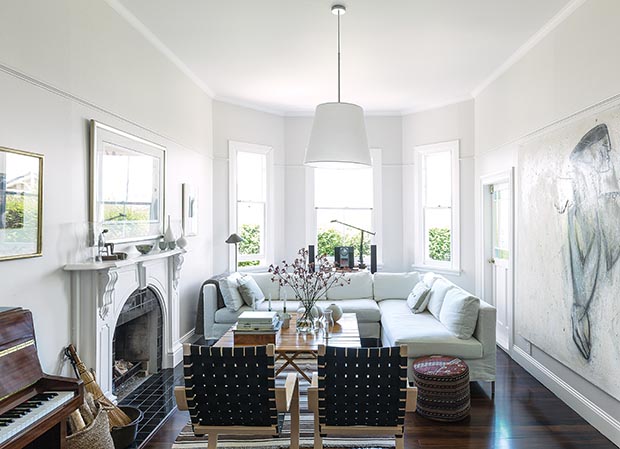 The lounge is a cosy spot on winter evenings and during the day it’s a riot of noise as Maureen-Ann teaches the grandkids to play the piano.

It was a second chance at life in the old Birkenhead villa on their return to New Zealand 28 years later that would give the couple the opportunity to put down roots at last.

“I was driving around Birkenhead when I saw a real estate agent hammering a ‘For Sale’ sign into the ground, and my heart jumped. I called Kelly to say, ‘let’s buy our old home back’. From there, he became a man on a mission determined to win it back at the auction. And we did.” 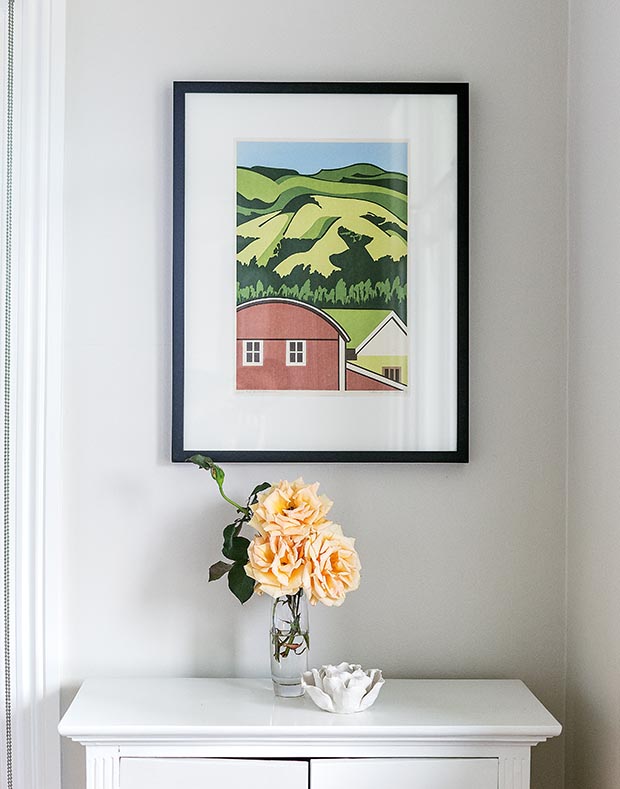 Simplicity and neutral tones is the theme throughout the house.

When they bought the villa the first time around – 41 years ago – it was borer-infested and divided into two dingy flats.

“My father said if the borer had stopped holding hands, the whole thing would have fallen down,” says Maureen-Ann.

“It really should have been bulldozed, but we didn’t know any better.” 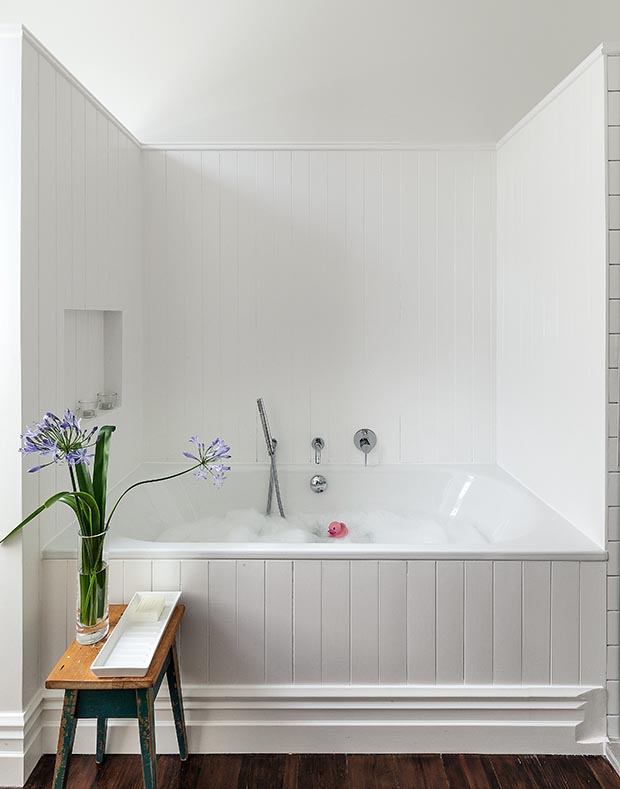 The main bathroom started it’s life as a bedroom.

A slope in the floor meant that when either Maureen-Ann or Kelly was cooking in the kitchen, they had to stand in front of the stove and hold the pots in place.

The young parents poured hours of time and labour into knocking down the flat division to make it a unified space.

While the family only lived in it for a few years the first time, it’s the house that Maureen-Ann always thinks of as the family home. 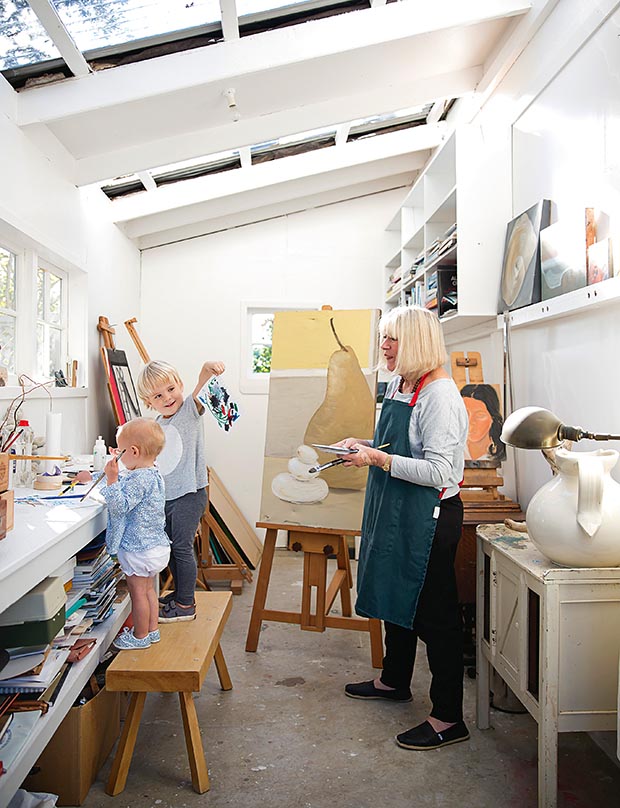 Maureen-Ann has always had an artistic streak.

“I can still remember Jo as a toddler running up and down the hallway playing with a wooden train set. We moved a lot over the years, but when I think back on the children, I think of this house.” Now they are back living there, it’s their four grandkids who have turned the native timber floors into a playtime Grand Prix. 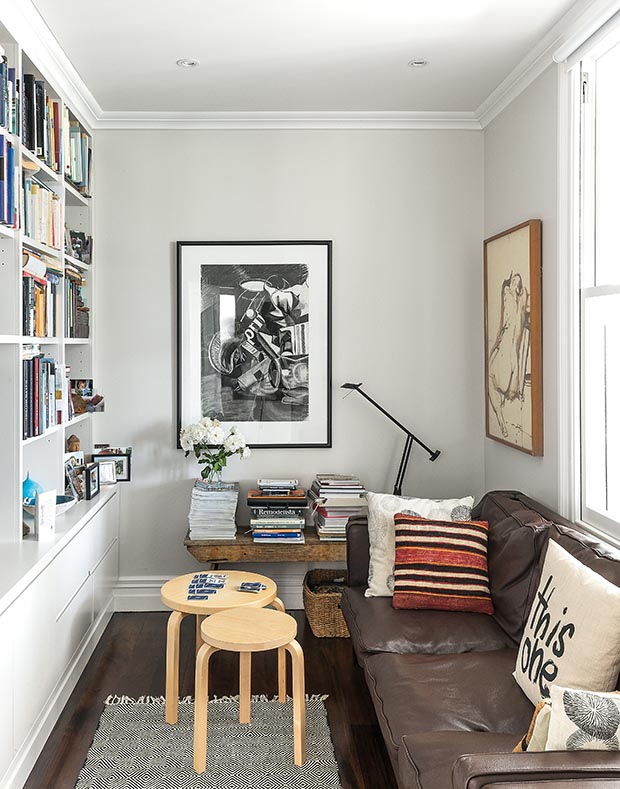 Maureen-Ann drew the charcoal artwork while attending an art class in Sydney.

It is an uncanny experience to live in the same home twice but the people who owned the home after the Farrimonds enhanced it, says Maureen-Ann. They added the master bedroom en suite, the pool and central heating (“we bless them every day”).

After re-buying, the couple waited a few years to give the Birkenhead house time to catch up to its market value before embarking on a further renovation that they just couldn’t resist.

But this time they enlisted the help of architect Jason Bailey to reconfigure the layout, and builder Hans Ellehuus to open up the kitchen and give it indoor/outdoor flow, plus create a separate laundry area and scullery. 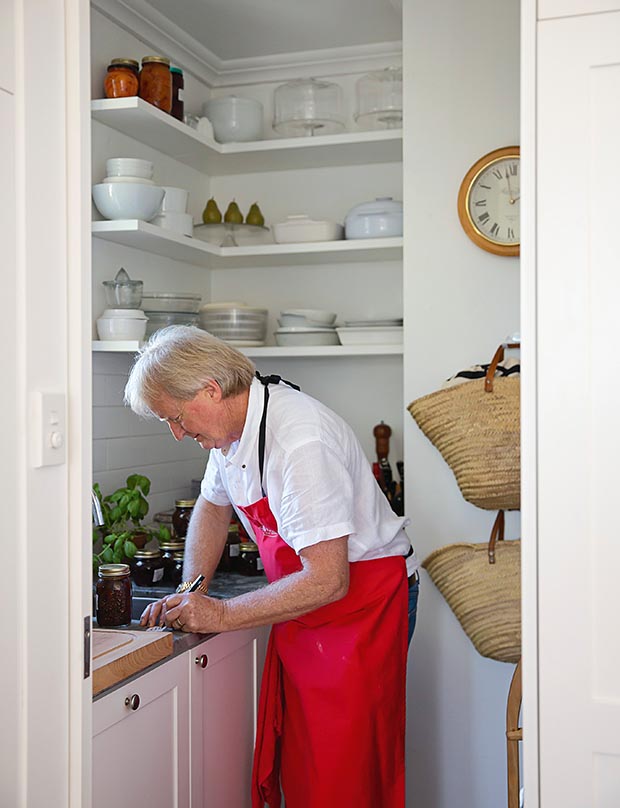 Kelly writing labels for his tamarillo chutney in the scullery.

“I didn’t know I wanted a scullery until I had one,” says Maureen-Ann. “It’s amazing being able to close the door on a messy bench top.”

Interior designer Karin Montgomery Spath decorated the home in neutral tones and made it a great entertaining space – the couple can have up to 28 people for Christmas brunch at their dining table, made from French church pews which “just extend outside”. The villa’s garden has come along way since planting liquidambar trees.

“We love entertaining. I do all the shopping, all the preparation and Kelly comes in and takes all the credit.” 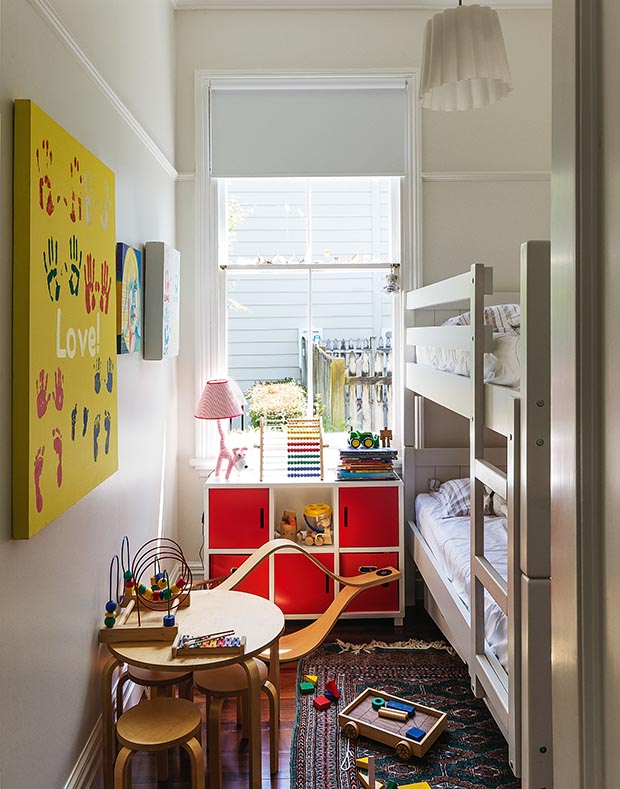 The grand-kids room still maintaining the neutral tones, with a splash of colour.

Kelly fills the scullery with chutneys, jams and marmalade made from the fruit. It’s a family joke that Kelly’s preserves are famous in Hollywood. A chef friend of Jo’s once carted Kelly’s tamarillo chutney, plum jam and marmalade back to New York and served it to director Steven Spielberg.

“I’m thinking of doing a private label, ‘By appointment to Steven Spielberg’,” says Kelly. “He was apparently impressed we had our own trees but thought the preserving was very quaint, and then called me an old man, which I didn’t like.” In door out door flow to the covered deck for year round entertaining.

Kelly makes a modern version of his mother’s Poor Man’s Orange Marmalade, and adapts many other recipes from the 1959 Journal of Agriculture Cookery Book.

“I often reduce the sugar because those old recipes were packed with it and the fruit that I use is pretty sweet anyway because I let it ripen on the tree.”

Kelly has always been a bit of a sweet talker. He first saw Maureen-Ann on a bus.

“I followed her, and she thought I was stalking her.” 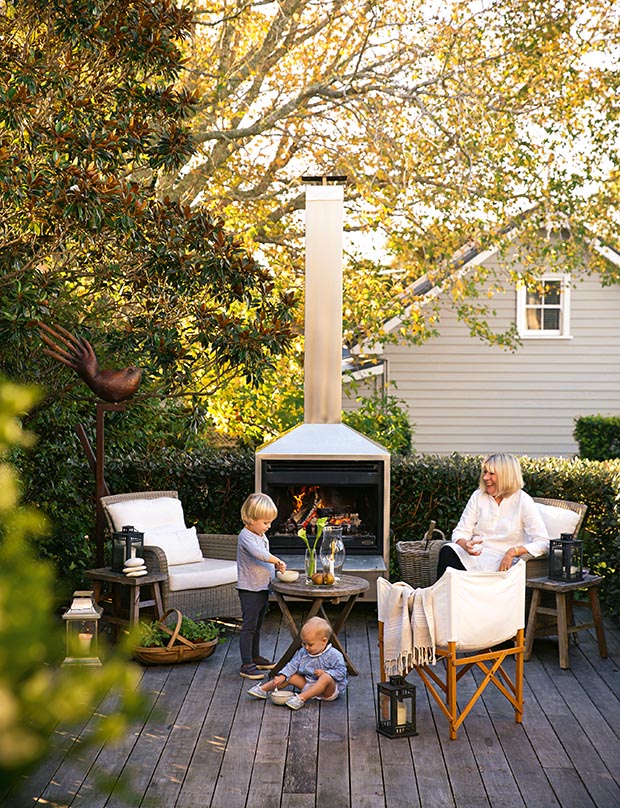 The outdoor fireplace is on wheels and can be repositioned if the wind direction changes.

But she says he won her over when he finally talked to her after getting her number from a friend.

“He phoned me up and said, ‘You don’t know me, but I saw you on the bus. I have tickets to go to the Red Army Choir in eight weeks’ time, and my mother is coming.’ I couldn’t say no because it was eight weeks away – and Kelly has always been good on the phone.” 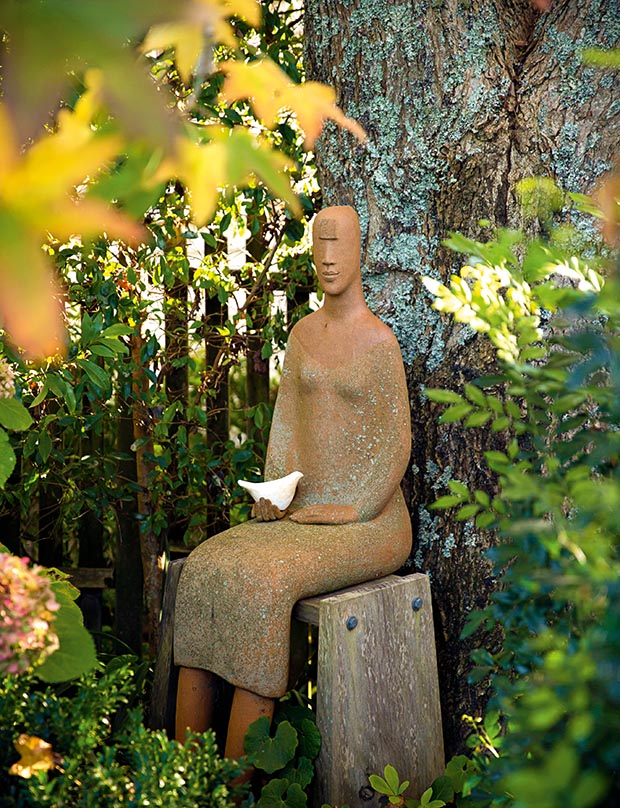 The bronze sculpture near the outdoor fireplace is by Dr Paul Dibble.

They dated for eight weeks before Kelly departed to Fiji for his first advertising role. When he returned to New Zealand after three months, they were married a week later.

The couple, who celebrate their 50th wedding anniversary later this year, have lived in Fiji, Toronto and Australia and have also traveled extensively. Most recently they went on an art and architecture tour of Japan and visited the Benesse Art Site in Naoshima, Japan.

The serial fixer-uppers have a passion for architecture and design but had renovation shockers when they were young. The worst being a townhouse in Sydney where the ceiling fell in when Kelly’s American boss came for dinner. 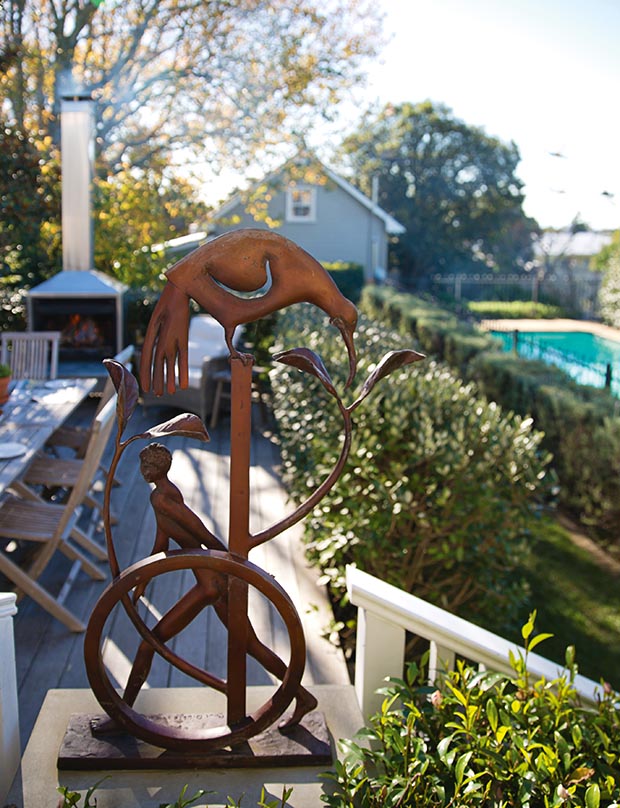 The sculpture under the tree is by Jin Ling and artist Greg Barron made the seat it sits on.

“It was diabolical. The ceiling came crashing down, and I said, ‘Right that’s it, we’re going out to a restaurant,’” says Maureen-Ann.

Living in the same house twice is a renovation advantage.

“We knew all the nooks and crannies and the mistakes we made, so we knew what would improve it,” says Maureen-Ann. Adds Kelly: “We fell in love with this house the first time around, and it was easy to do so again because the land itself is an inner-city oasis with such a lovely backyard. Why would we ever want to move?” 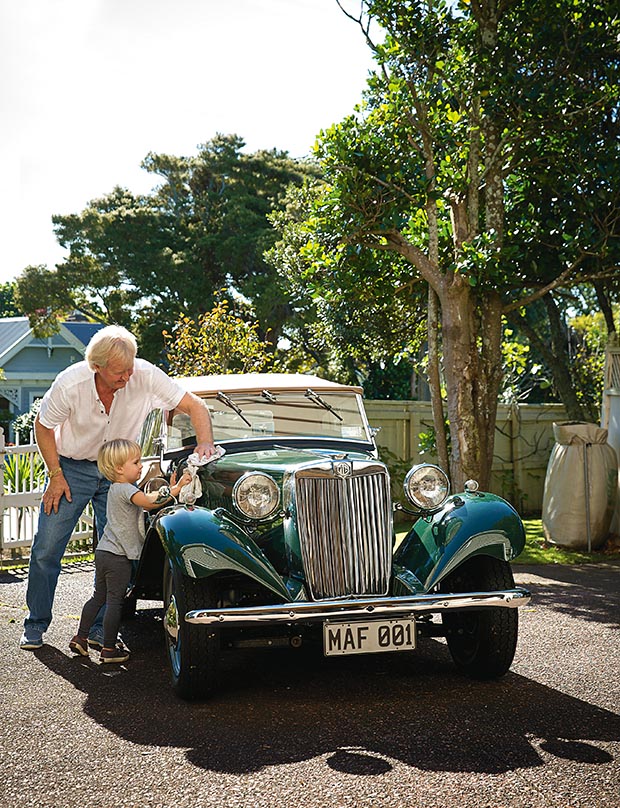 A TOUCH OF FROST
It’s a good thing all the oceans the Farrimonds’ 1952 MGTD has crossed don’t count as kilometres on the clock. The couple first bought their beloved classic car while living in Toronto, Canada, in the 1970s, paying the owner the CAD$1400 it cost over several months.

When they gave it its first outing on an icy, blue-sky day it caused a stir.

“All these people were waving at us, and we were thinking, ‘they must love our car’, but they were thinking, ‘Look at those stupid New Zealanders. It’s 20 degrees Fahrenheit outside [minus-six Celsius].’ We got frostbite on our cheeks.”

The car traveled back to New Zealand, and Kelly’s mother drove it, and then it was shipped with the couple to Australia.

When daughter Jo was eight years old, she fought to save it from being listed in the Trade and Exchange.

“It’s been under threat a few times,” says Maureen-Ann. “When you have mortgages, suddenly money gets a bit tight, and the car would normally be first to go. But Jo said, ‘If I were old would you sell me too?’ How could we argue with that?” Both kids eventually learned to drive in the MG.