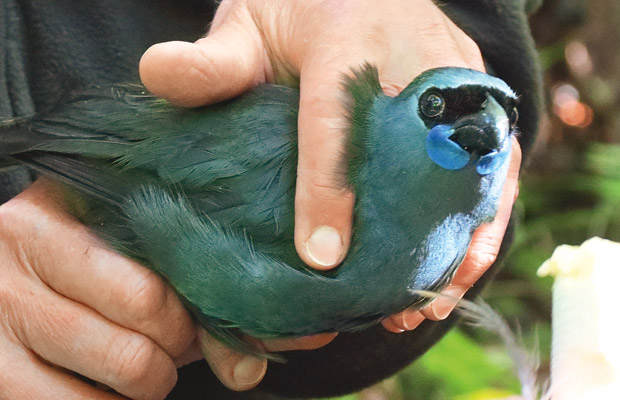 A nature-loving group in the Bay of Plenty revives the local kōkako population year by year. It’s now one of the largest in the country.

As the sun crests the horizon at the Kaharoa Conservation Area, 30 kilometres northeast of Rotorua, dozens of north island kōkako glide about the regenerating canopy. With more than 170 hidden in the trees, in all likelihood trampers will hear one of their haunting songs.

It took an army of trampers and nature-lovers to bring this scene to life. In 1997, the newly formed Kaharoa Kōkako Trust set out with the lofty goal of saving the dwindling population. The Kaharoa Conservation Area had been part of an eight-year research study that determined pest control was critical for successful breeding. Only 26 kōkako remained in the area once the study concluded.

Despite the dire need for further pest management, DOC had little funding to continue its efforts. That’s when Kaharoa locals Peter Davey and Rachel Vellinga stepped in. The duo drafted an agreement with DOC and rallied residents to form a team of volunteers. DOC funded the traps and bait; locals provided the person power to rid the land of rats, stoats and possums ahead of the breeding season. Four pairs of kōkako bred successfully within the year — a significant achievement after two years without any new chicks. “Kōkako are one of the last birds New Zealand has left that can disperse large seeds from native trees,” says trustee Laurence Kirk. “There’s nothing like them in the rest of the world.”

More stories you might like:
7 tips for hard feeding ewes during pregnancy (and what to do if she's not eating enough)

Similar to many Kaharoa residents, Laurence was swept up by the grassroots effort in the late 1990s. He had always enjoyed birdlife and the forest; the trust was an excellent excuse to enjoy the bush while aiding in its regeneration. “Locals simply wanted to do something for their forest.”

The number of kōkako in Kaharoa has more than quadrupled over 24 years. It is the fourth-largest relic kōkako population in New Zealand and a critical asset for translocating fledgelings to other safe havens through the national kōkako recovery programme. In 2010, the group was named the Green Ribbon Award’s supreme winner for its ongoing efforts.

“Our work may have taken 20 years, but we’ve proved we can bring a local population back from basically the brink,” says Laurence.

The results of this hands-on work transcend the canopy. Over the past two decades, the rugged Crown land has rewarded volunteers with noticeably more native flora and fauna. Even bat numbers (which the trust monitors) have improved since its inception.

Laurence encourages anyone in the area to stroll along the Kaharoa Kōkako Track (2.4 kilometres return) for a chance to hear the hum of a healthy forest. “The more people who visit, the better they will understand and perhaps be encouraged to do something similar at another forest. It’s amazing to see what can be achieved.”

The Kaharoa Kōkako Trust carries out a pest-control sweep ahead of the kōkako breeding season, a strategy led by a national experiment on pest control. Maintaining tracks and bait stations wasn’t always a walk in the park; Laurence remembers the days when volunteers all piled into a 4WD ute to navigate through the rough forest. 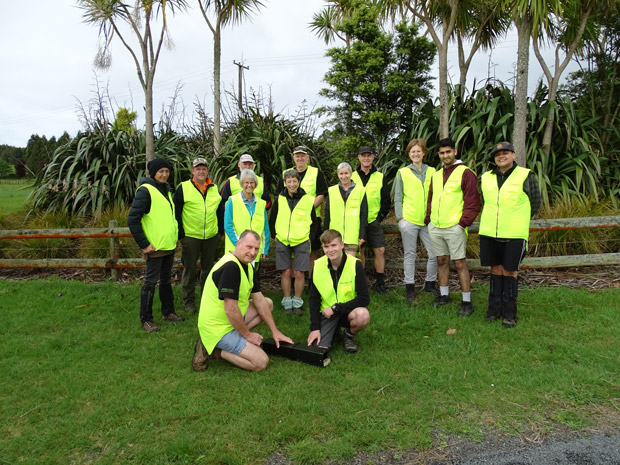 Volunteers place tracking cards in special rat tracking tunnels so they can monitor their success.

“You couldn’t get in and out any other way,” he says. The number of trails and bait stations — in line with the kōkako — has increased dramatically since the trust’s inception. These days, up to 30 volunteers disperse themselves among the bush, each covering two to three tracks within the 803-hectare conservation area.