It can be challenging to see pelagic seabirds, and penguins in the wild  because many nest  on remote islands. Here are the best penguin and sea bird watching spots in New Zealand from Tiritiri Matangi  to Rakiura/Stewart Island.

New Zealand has a diverse range of bird species and is especially important for pelagic species, which spend most of their time in the ocean. Seabirds can be spotted by boat or on the mainland, just as long as you know where to look. Here is how to get a peek at some of New Zealand’s native penguin species.

HOW TO SEE PELAGIC BIRDS

It can be challenging to see pelagic seabirds, and penguins, because most of them nest on remote offshore islands, and many of these islands are sanctuaries, so it is extremely difficult to get permits to visit them. The birds are also often flying far out at sea.

However, there are numerous pelagic birding tour operators in different parts of New Zealand, with boat trips of various lengths from half a day to 30 days, for Southern Ocean cruises. The time of year is important as many of these birds are migratory and, keep in mind, seabirds have distinctly different ranges, habits and habitats. There are four accessible pelagic seabird hotspots.

The Hauraki Gulf, north-east of Auckland, has numerous islands, islets and rock towers, and the surrounding waters are prolific seabird nesting and feeding areas. Many of these islands are predator free and seabird colonies thrive on them. The area supports 27 species of seabird and includes the only known breeding colony of six species.

Hauturu/Little Barrier Island, 2,880ha, is a veritable treasure land for both terrestrial birds and seabirds. You cannot easily visit Hauturu and permits are required, but pelagic tour boats can get close. Likewise, the much smaller Mokohinau Islands support seven species of burrowing seabird. You cannot leave the boat but can get close to nesting sites for a marvellous pelagic birdwatching experience.

The Chatham Islands, an archipelago of 11 islands, of which two are inhabited, is a hotspot for both seabirds and terrestrial birds. There is one flight to the Chatham Islands each day from Auckland, Wellington or Christchurch. There are also small-plane flights to nearby Pitt Island, which has comfortable lodge accommodation. Mainland-based birding tour operators have scheduled visits to the Chatham Islands, but it is also possible to make your own way there, charter a boat for the day and get close to some of the birds on the smaller sanctuary islands.

Kaikōura, on the north-east coast of the South Island, is a pelagic seabird hotspot. An underwater canyon plunges a kilometre below the sea and this results in a vast seawater convergence zone and a rich food chain. It is a terrific habitat for whales, dolphins and seals, but there is also superb pelagic bird spotting.

Rakiura/Stewart Island, 37km south of the South Island, comprises one main island and numerous smaller ones. It is great for both terrestrial and pelagic birding. Many of the birds that breed on the Southern Ocean islands can be seen foraging here, as well as three species of penguin, in season. There is also very good terrestrial birding on nearby Ulva Island. There is a daily ferry to Rakiura from Bluff, a small-plane air service  and a choice of accommodation. Numerous boat operators take birdwatchers on pelagic birding tours.

Heritage Exhibitions. Ship-based bird and wildlife expeditions to Fiordland, the Antarctic and subantarctic islands, numerous seasonal departures from 11 to 30 days.

A GUIDE TO PENGUIN-WATCHING ON THE MAINLAND

Of the world’s 17 penguin species, six breed in New Zealand, four only breed here and a further five are regular visitors. Three species nest on the mainland. Penguins do not fly and are not tube-nosed seabirds, but some consider them to be pelagic birds in that they spend most of their lives at sea.

They belong to the family Spheniscidae, an endearing family that is taxonomically unique. In this book they are placed in the pelagic section as they face similar survival issues as other pelagic seabirds, and are almost as difficult for mainland birdwatchers to see.

Penguins are flightless, spending half their lives in the sea, to which they are brilliantly adapted. They are terrific swimmers, with flippers instead of wings, and blend with the ocean with their dark feathered top sides and pale undersides. They eat krill, fish and squid, which they catch while swimming. During the austral winter they live in the ocean, and recent tracking studies of 90 birds from two species show that they swim up to 15,000km in that time. Usually they return to their traditional breeding areas in spring to nest, head for the sea again when the chicks fledge, and return in early autumn for a few weeks to moult before going back to sea for half a year.

More stories you might like:
The Kaikōura locals bringing banded dotterels under their wing — one stretch of beach at a time

The Little Penguin, Eudyptula minor, or kororā, the world’s smallest penguin, nests in coastal regions of the mainland and on many Southern Ocean islands. It is easy to see, in season, at Tiritiri Matangi, Oamaru Blue Penguin Colony and Pukekura on the Otago Peninsula.

The Fiordland Crested Penguin, Eastern Rock Hopper Penguin, Snares Crested Penguin and Erect-crested Penguin (subfamily Eudyptes) are all of medium height and have snazzy head markings, including a white stripe. In some of the species the eyebrow stripe can stick up ferociously when the birds are agitated.

The Fiordland Crested Penguin, Eudyptes pachyrhynchus, or tawaki, standing some 60cm high, is the only mainland nester of this subfamily. It can be seen in South Westland, Fiordland and Rakiura/Stewart Island. The birds lay their eggs in July and August and continue to feed the chicks until early December, when they go to the sea, returning for three weeks in February to moult. They can be seen, in season, coming to shore in the early evening or leaving in the early morning at Monro Beach, South Westland and on the north-west circuit hiking track on Rakiura/Stewart Island.

The Yellow-eyed Penguin, Megadyptes antipodes, or hoiho, is the only species in its subfamily. It is a tall (75cm), handsome bird, with red feet, red bill, yellow eyes and a predominantly yellow head. It is also the most endangered of the penguin species, with estimates of only 2,000 pairs left. Around 500 pairs nest on mainland South Island, but the majority nest on Auckland, Campbell and Rakiura/Stewart Islands.

Despite site management and predator control, mainland numbers continue to decline. There is concern that due to global warming and the increase in ocean temperature, the birds have to swim longer and harder to get food for their chicks. They can be seen, in season, on the Otago Peninsula and on Rakiura/Stewart Island.

The New Zealand government, non-government organizations, and generous businesses and individuals have invested hundreds of millions of dollars and a huge amount of time in projects to eliminate introduced mammalian pests from the offshore islands. Doing so allows the ecology to return to something like it once was before humans arrived and brought bird predators with them, and gives birds safe, predator-free habitats in which to live and breed.

More stories you might like:
40+ signs of a vitamin-deficient chicken (plus how to ensure your chooks get enough vitamins)

Over time, the pest-elimination programmes have been extremely successful, with more than 100 of New Zealand’s 220 larger offshore islands becoming predator and pest free. Consequently, many bird species are thriving and increasing in numbers, particularly terrestrial birds and pelagic birds that do not migrate to the northern hemisphere.

It is tragic, after so much effort being put into predator elimination, that many seabird species, especially those that migrate north during the austral winter, are returning from their annual migration to the north Pacific anaemic and weak, or are not returning at all. For instance, Flesh-footed Shearwater numbers are declining because of the diminishing food supply in the north Pacific.

The problems birds face in the north Pacific are many. Habitat for foraging shorebirds is being destroyed by mud-flat infill, pollution, industrialization and intensive net fishing. Global warming, and the consequent rise of the sea temperature, which some theorists say is higher in the northern hemisphere, is playing havoc with the food chain and changing birds’ normal eating patterns, and industrial harvesting of krill is taking an essential element out of the food chain. Overfishing is also making it much harder for these high-revving, and consequently constantly hungry fliers to find the food they need. They spend more energy hunting for food and are debilitated by it.

The global fishing industry is another aspect of seabird loss. Albatrosses and many of the bigger petrels follow boats for fishy discards and get hooked by longlines or have wings broken by collision with trawl lines and boards.

Plastic is being mistaken for food by many seabirds. Ocean plastic pollution north of the Equator is worse than it is south of it because there are heavily populated countries in the north, many of which do not seriously bother with recycling or safe rubbish disposal. Many major rivers are gushing plastics and poisonous pollutants into the sea.

Then add nuclear radiation of the sea from the Fukushima tsunami and nuclear disaster. Some species that traditionally forage in that area are potentially affected by it. In summary, the future of migratory seabirds is not looking good.

These are big global issues beyond New Zealand’s control, but I am proud that New Zealand has led the world in seabird bycatch mitigation techniques and practices in the fishing industry. It has also successfully demised introduced mammalian pests and predators in New Zealand’s many Southern Ocean islands and a vast number of smaller mainland offshore islands. The colonies of pelagic seabirds, their home bases, are at least safe and secure. 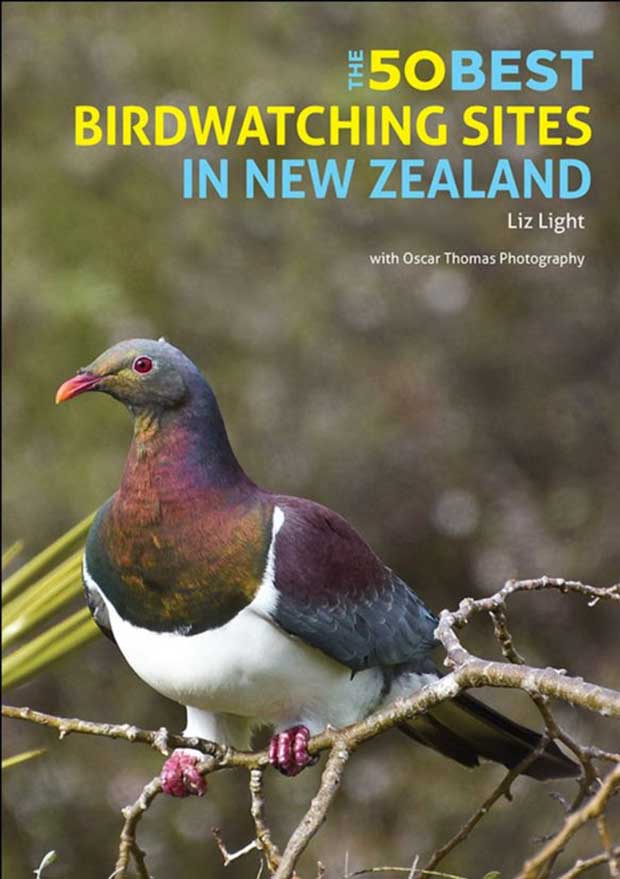 This is an extract from The 50 Best Birdwatching Sites In New Zealand by Liz Light, John Beaufoy Publishing, RRP $39.99.