A duck to water: Meet the group of hunters and fishers working together to save their local whio population 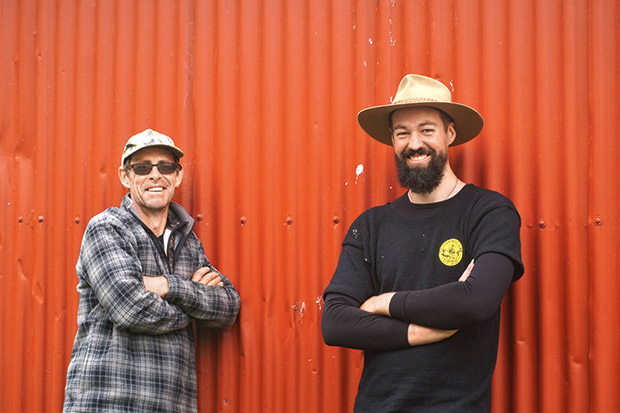 Geoff McLaughlan (left) and Sam Gibson are hunters with a mission to protect the native whio (blue duck).

A band of hunters and fishers is bringing a rarely sighted bird back to the Waioeka Gorge.

An experienced hunter reads the land like a well-worn map. Observations gleaned from long weekends in the bush can mean the difference between success and failure; for one endangered native bird, perhaps even life and death.

This acute sense of place led outdoorsmen Sam Gibson and Geoff McLaughlan to detect a problem in the Waioeka Gorge, a 25,000-hectare catchment between Ōpōtiki and Gisborne. The two old university mates were hunting and fishing along the upper Waioeka River when they noticed a lack of whio (blue duck).

Sam, born and raised in Gisborne, has been tramping in the area since he was a child. “When I was a kid, there were whio in every corner. They were as common as tūī in your backyard,” he says.

In 2019, a DOC survey confirmed the future of whio in the area hinged on four pairs living in the stoat-infested territory. The odds of survival were not good. “It’s likely those whio hadn’t bred properly for the past 10 years,” says Sam.

He and Geoff, both with environmental science backgrounds, hatched a plan to beat those odds. After getting a blessing from DOC and several donated self-resetting traps, the duo and some friends set out to do what they do best. They waded through cold water, tramped uphill and established a 20-kilometre trapline along the Waioeka River. More stories you might like:
From the United Nations to a back-to-nature apothecary, how grief helped Georgina Langdale find her path

Today, more than 100 hunters and fishers maintain and expand the trapline on weekend outings. “We always leave time to hunt, fish and forage for food and never treat trips like 100 per cent work. For that reason, people want to come back,” says Sam.

The Eastern Whio Link aims to serve many locals — not just the feathered ones. Hundreds of students have headed into the Waioeka bush for outdoor education, which the project’s volunteers make possible. Then there’s the gear library created to make the bush more accessible for those without a tent, pack or sleeping bag.

For these reasons and for its close working relationship with Mātāwai Marae, the Eastern Whio Link was named a finalist in the 2021 New Zealand Biosecurity Awards. “We started with whio because they are easy to protect,” says Sam. “Now we are using that work as a tool to engage with people.” There’s always time to catch rainbow or brown trout while on a pest-trapping trip with the Eastern Whio Link. Sam, pictured in the Mangaotane Stream, is also partial to using evenings for hunting deer.

Geoff insists there’s no end goal when their work will stop. But, if there were to be a pinnacle of success, it would be to connect their whio population with those in Te Urewera and the Raukūmara Range.

And with recent funding from the Jobs for Nature programme, the initiative is one step closer. The money means they can hire three full-time trappers and a project manager from 2022. “That’s going to make a hell of a difference. We can’t afford to let this species disappear. There are too many species that are on the brink of it.”

The whio is a national icon more commonly found on the $10 note than in the wild. Fewer than 3000 remain in Aotearoa, but the tide is starting to turn in the upper catchment of Waioeka Gorge.

In two years, conservation group the Eastern Whio Link has established pest traps along most of the streams in the catchment. Keeping stoats from this riparian habitat is a crucial step for whio to breed successfully. “We are hunters and fishers who understand the ecosystem pretty well. We’re definitely not a one-trick pony,” says Sam. easternwhiolink.co.nz