At 15, Gaye Batty wanted to be a watch repairer, so she worked for a week at a local jeweller in New Plymouth where she grew up and attended Girls’ High. A boy also did the trial; he got the job. She missed out because she was told that “girls have families and leave”.

Gaye was mortified. But she didn’t let sexism stop her. She became the first female engineer at Tasman Pulp and Paper in Kawerau after graduating from Massey University with a bachelor’s in industrial management and engineering.

In the 1980s, she had a radical change. She started a chain of video-game arcades across the Bay of Plenty and Auckland while also singing backing vocals and playing the keyboard in a band fronted by a former partner. They produced two records that made the charts, and the video chain turned over almost $1 million a year.

Working again as an engineer for food giants Heinz Wattie’s and Effem Foods, Gaye acquired skills in logistics and procurement.

These were invaluable when she became the leader of an IT procurement project at Air New Zealand and, later, operations manager for magazine distributor Gordon & Gotch. Meanwhile, Gaye underwent nine years of IVF but told no one.

At 43, she gave birth to the first of her two daughters, now 15 and 13. She took three years’ parental leave before returning to her career. Her husband, Allan Samuel, is her strongest supporter; he now does most of the cooking and running the children around.

Twenty years in Auckland was enough. Although her parents had died, she still had an aunt and friends in New Plymouth — but no job. So she called on an old school friend, Barbara McKerrow, who was CEO of the local council. Barbara became her mentor.

“She opened doors that led me into project management with the district council, and the construction of the Len Lye Centre. When that finished, she pulled me onto the executive leadership team, heading business transformation. It was a new role established to engage with customers, staff and stakeholders.

“The goal was to design and lead a programme of change projects that modernize the way the council delivers its services for the next 10 to 20 years.”

When the New Plymouth airport-redevelopment role came up, she was seconded to the airport company as project director to deliver another challenging design-build project. Technology and innovative engineering have become a passion. 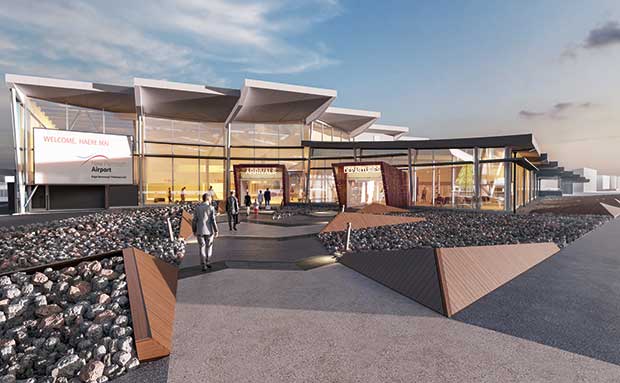 “In terms of every building I’ve ever done, I like to make sure we’re designing for tomorrow and beyond. Sometimes that involves tactful navigation through the expectations of the client, customers and users of the building — and the holders of the purse strings.”

Gaye’s career highlight has been delivering the iconic Len Lye Centre on time and within budget.

The $18.3 million project, which included the earthquake strengthening of the Govett-Brewster Art Gallery, is considered one of the most courageous contemporary art museums in the country.

Since 2016, the 60-year-old’s focus has been the $28 million terminal at New Plymouth Airport. The work involves writing reports for the council and media articles to engage the community, talking with iwi, and overseeing the project design and build with architects and construction teams. On display in her office, alongside her hard hat and gumboots, is a charter to foster teamwork, or kotahitanga.

“Whereas many engineers have technical minds, they can be blunt,” she says. Learning diplomacy has been an invaluable skill. “Every change is expensive. So you need to know which battles to fight.”

The new airport terminal is due to open by the end of the year.

Now Gaye has been asked to project manage the two-year restoration of the 100-year-old neoclassical Sarjeant Gallery in Whanganui, so she is planning a similar charter. She currently works four days a week for the airport project and one day a week on the gallery, relishing the opportunity to restore another heritage building.

There is no such thing as a single career path anymore… look at me.

These days, it’s all about having transferable skills.

3. Kick the inner critic off that shoulder.

Self-doubt and past regrets are corrosive. (Gaye admits to suffering from self-doubt at times and credits friends for their encouragement.)

Mine has helped me work through some of the more difficult moments in my career.

As one door closes, another one opens.

If a new opportunity comes up, don’t be afraid to grab it with both hands. Women think differently and can be more creative and articulate than their male counterparts. So they have a vital part to play in boardrooms and in leadership positions.