How to deal with (and prevent) an aggressive rooster 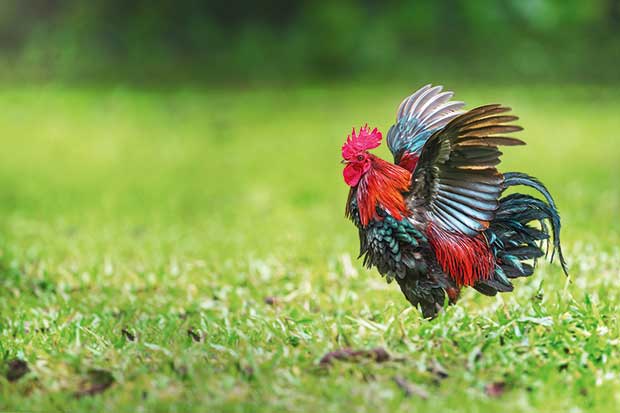 Psychology can be your best friend when dealing with an aggressive rooster.

Mock fights are a type of play for chicks of both sexes.

Aggressive behaviour by males, towards each other and humans, starts at 4-6 months of age when cockerels start to mature and testosterone levels rise.

Never encourage fighting by teasing or taunting young poultry. Early experiences may programme a rooster’s response. If you’re raising roosters from chicks, treat them with respect and care, and handle them regularly in a calm, gentle manner so they form positive associations with your presence.

However, be aware that even the most well-raised male can turn aggressive as he matures.

A cockerel, a teenager in the poultry world, will try to exert his dominance over you by running up behind you or chasing small children.

The best thing to do (if possible) is ignore him. Young males have no perception of your size or that you could kill them. Don’t retaliate or hit out with a boot or stick. Retaliation is seen as a threat and their behaviour will get worse as they mature.

Psychologically, if you’re facing an aggressive rooster, it’s best to do what a subordinate male would do, as quickly as possible. Turn sideways, then slowly and quietly move away. To a rooster, you’re communicating that you are lower in the pecking order.

Next time you enter his space, if you immediately turn away, he should remember that and accept your ‘place’ in the pecking order.

Some experts argue the opposite, that you attack and dominate, and they will turn away from you, seeing you as the ‘alpha’.

But once you start confronting a dominant rooster, he’s learning to attack you every time he sees you. You’re not there for the other 23½ hours of the day when he is in charge, and his instincts tell him he must assert himself.

Genetics play a part in aggression. Old English Game were bred to be the fiercest and nastiest of all the poultry, towards their own kind and their keepers. Heavy breeds like Orpingtons were bred to be placid; if they do attack, it will at knee height as they cannot fly up. 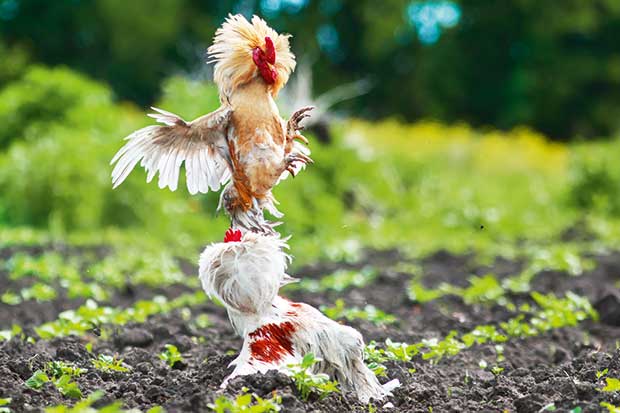 Smaller, light breeds like Leghorns can be feistier, and can fly up quite high, easily hitting you on the shoulder or head. Leg spurs grow continually and are very sharp, easily slashing through skin.

There are always exceptions. Lots of people have sweet-tempered roosters that live in peace. But never assume that any rooster is completely harmless.

A rooster that becomes increasingly aggressive towards people is unlikely to change. It may be best for you and your flock to remove him, to prevent injuries.

He’s also passing on his aggressive nature, and if he’s too busy fighting, he’s not going to be mating so fertility will drop.

WHAT HAPPENS DURING A FIGHT

The behaviour of roosters towards each other offers clues on what you need to watch out for.

Typically, roosters ‘front up’ first, then turn sideways and walk around each other, always keeping an eye on their opponent. They’ll sometimes pretend to peck at something. One may drop a wing and scrape it on the ground. 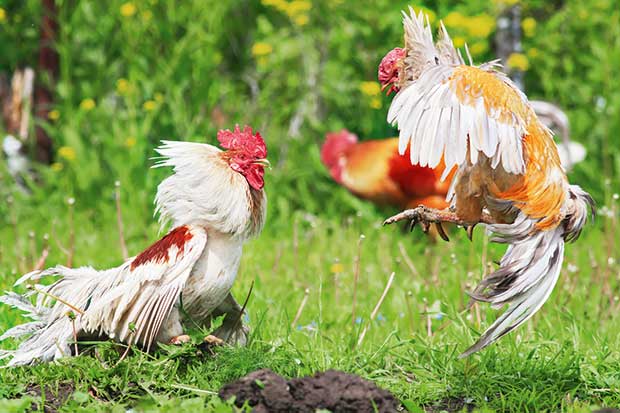 Eventually, the bird that thinks its dominant will stand upright. At this point, a subordinate rooster will usually back down and slowly retreat.

If neither gives in, it quickly blows up into a fight. Roosters raise their neck feathers, stretch their bodies upward, and point their wings down, holding them out from their bodies.

They use the bony edge of their wings to beat each other, attack with their feet and spurs, and grab at feathers with their sharp beaks.

A fight will carry on until a rooster is seriously injured and unable to fight, retreats, or dies.

Sometimes you may need to group males together. Running roosters you’re fattening for meat as a group works well.

You will butcher them before they are fully mature and most likely to start fighting. During this rearing phase, they will still establish a pecking order.

Occasionally, dominant males may gang up on a smaller bird, one with a health issue, or a different colour. Immature males may chase down and peck a weaker individual to death. 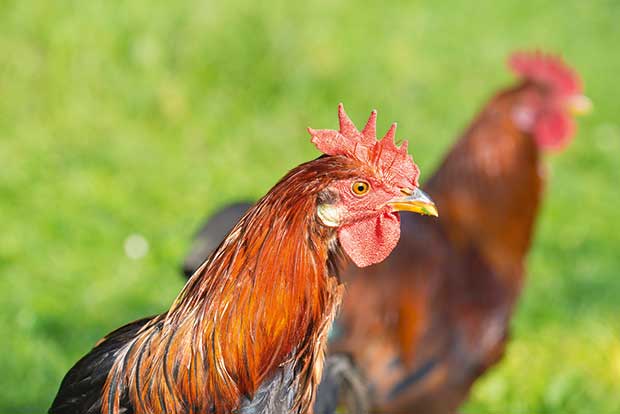 It’s important to be aware of smaller, weaker or at-risk birds and remove them if you see signs of trouble.

You can help control the situation by giving a bachelor flock plenty of room, multiple shelter areas, feeders, waterers and roosts. Place cardboard boxes in the run so birds can’t see each other all the time; out of sight, out of mind.

A dim environment can help to keep them subdued. Give them lots of activities, such as:

These types of activities keep them focused on something else and using up energy. Keep a bachelor group out of sight of your hens, especially if there is a rooster with them.

More stories you might like:
What is the difference between a miniature horse and a pony? Things to consider with minis

WHAT TO DO WITH BIRDS YOU DON’T WANT

You’ll often see groups of roosters dumped in parks or along roadsides. People dump roosters because they can’t face humanely culling birds they no longer want, and think letting them go into ‘the wild’ gives them a life.

However, it is a breach of the Animal Welfare Act to abandon an animal in this manner. 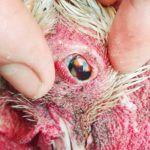 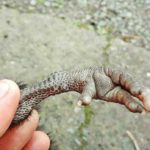 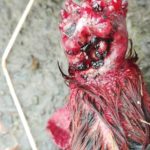 It might appear that these birds are ok, but volunteer groups around NZ who help dumped poultry find this isn’t the case.

Dumped birds suffer, then die, usually in pain. They struggle to find food. They are plagued with mites and parasites, and are easy prey for predators like dogs, cats, ferrets and stoats. They are often found with infected wounds, or old healed injuries, possibly inflicted in dominance fights that take place every time a new bird or birds is dumped.

What you don’t see when you drive past, are the birds dying or dead in the undergrowth.

If you can’t face culling a bird, or want to try and rehome one, search for the NZ-based groups on Facebook which can offer you advice and assistance. These include:

Roosters 101: How to manage behaviour of the king of the coop