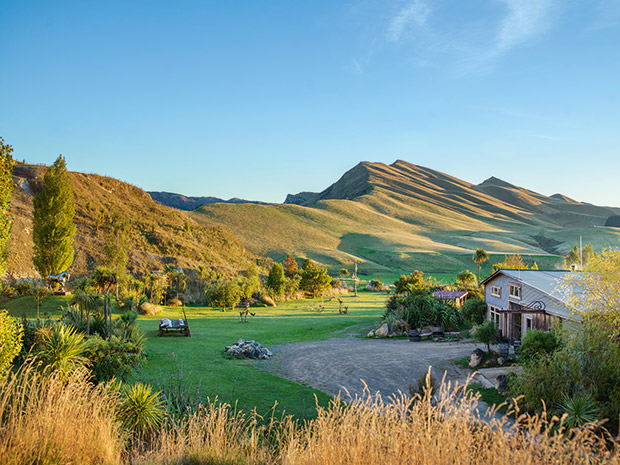 When a gaggle of gardeners get together to make something happen, an entire district can reverberate with the result for years.

The Hurunui region of North Canterbury is one of the largest in the country and one of the sparsest in population. Straight roads, distant mountains, a famous alpine retreat with thermal springs, and dairy conversions of lime-green pastures contrasting with bleached, unirrigated paddocks. Sheep scatter across the latter, and dairy cows stand shoulder-to-shoulder on the former.

Braided rivers run in sparkling necklaces through wide shingle beds bordered by banks of willows and poplars. A late drought is churning the stomachs of the farmers who do not have access to irrigation. The sun has risen, day after day, into endlessly blue and always cloudless skies. What they’d give for a snarling southerly and sheeting rain.

Ideally, the quality of mercy would be a gentle rain falling from heaven for days and days without end. Please. Will it rain before the ground temperatures drop below 12 degrees Celsius and grass growth comes to an end for the season? “Never had one this late in my memory,” a farmer says.

“One day closer to the end of the drought,” another tells me, optimistically. He is overseeing a mob of sheep grazing the “long acre” of roadside grass.

“Is it okay to drive through them?” I ask.

“They won’t even notice you — they’re keen on these old English pastures along the side of the road.”

An hour of roadside tucker saves him $100 a day in feed costs. He has no grass to speak of, and today he’s bored (forgotten his book) and seizes an offered magazine with great interest.

“I hope so,” I say conversationally, but he’s already begun reading.

Driving off slowly to not to disturb the sheep, I wonder if he’ll recognize the woman who just passed a magazine through his Land Cruiser window is the same as the one on the editor’s page. If he does, it’ll make him smile. He’ll tell his wife that a funny thing happened that afternoon while he was watching the sheep on the road. 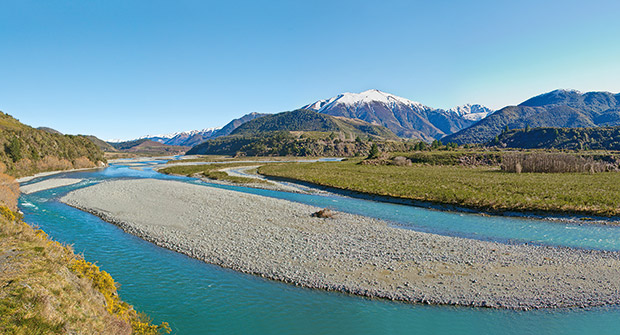 The beautiful Waiau River winds through many valleys on its journey from the Southern Alps through the township of Waiau to the sea north of Cheviot. Photo: Colin Capelle.

“Out of a cloud of dust caused by a car’s approach, a woman emerged looking hot and bothered. She chatted for a few minutes, gave me a magazine then vanished into the middle of the sheep. If it is this one,” he’ll say, pointing at the editor’s photo, “she scrubs up nicely for a photo.”

Strange and wonderful things can happen on back roads in this part of the country. People are so scarce it’s like Central Otago 25 years ago — without the stone buildings and the remnants of the gold-mining days. Here, the glory days were all about sheep.

Tīpapa Estate, the historic 750-square-metre homestead built in 1928 and 170-square-metre woolshed in the Greta Valley, once stood 12 shearers at a time taking fleeces (worth their weight in gold in the 1950s) from the sheep. Today, the beautiful woolshed, built in 1890 when the station was 10,000 acres, is more likely to have wedding guests pirouetting across its floor than shearers.

Everything changes. Life goes on.

One of the country’s most famous gardens, Flaxmere, is another wonderful apparition. It is bone-dry on the corrugated road to Flaxmere, inland from Hawarden, and when the thicket of tall trees hints at something exciting within, an oasis appears. There is a hot breeze, and the temperature reaches more than 20 degrees Celsius. It’s May. Unheard of temperatures. 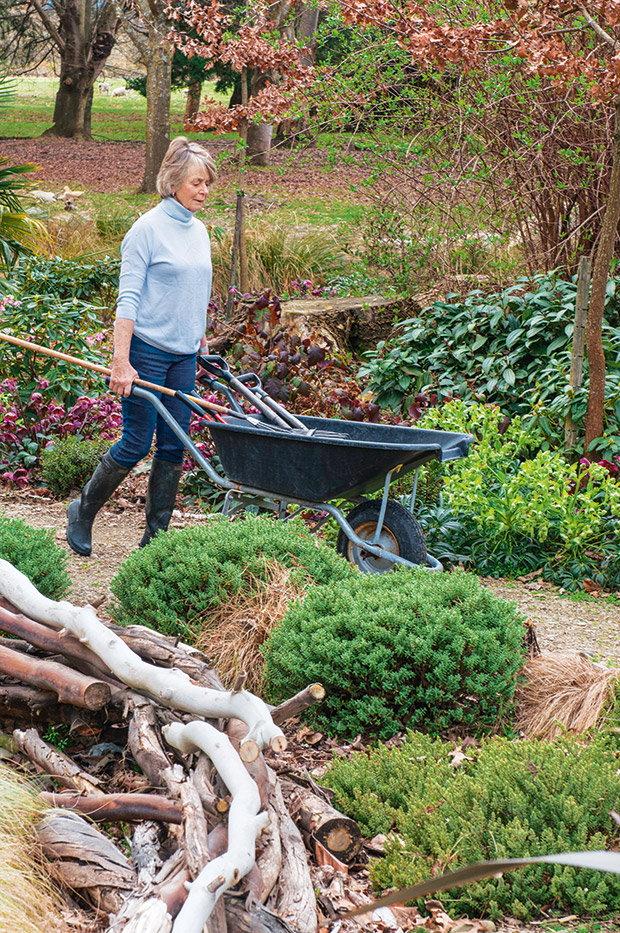 Penny Zino, creator of Flaxmere Garden, and a driving force in creating the Hurunui Garden Festival, stares at her ponds. Once were ponds. They’re dry now for the first time in her memory, and she’s been here for 50 years. Will the water return? Who knows?

Meanwhile, her beautiful garden is tranquil on the soul and inspiring to the spirit. She’s had more challenging times, and she knows that keeping on is the best path through life. Several years back, she was worried after the Kaikōura earthquake left the Hurunui District in a slump.

“Everyone thinks that the earthquake damaged Kaikōura, but the epicentre was Waiau [a town in north Hurunui]. People were badly affected, houses were ruined, and spirits were down. Some of us decided to do something to bring tourists to the area to enjoy this beautiful part of the world.” 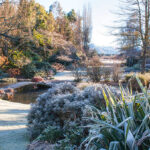 Flaxmere Garden, near Hawarden, is part of the festival. Photo: Juliet Nicholas. 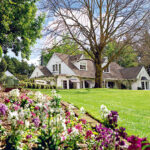 Saddlewood, near Hawarden, is one of many properties and gardens open for the Hurunui Garden Festival. Photo: Lucy Hunter Weston. 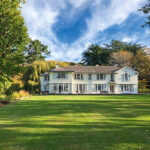 The Acton-Adams family initially settled Tīpapa Station in the 1880s, but the vast homestead was not built until 1928. 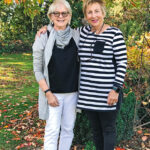 Artists, neighbours and friends Lissa Holland (left) and Jane McIntosh are the driving force behind Autumn with Art in Gardens next April, during which guests can visit three properties displaying the work of local artists.

For days, I have crisscrossed the vast spaces, unimpeded by traffic and joyously grateful for it, to see some of the properties that form the now-annual Hurunui Garden Festival. In its fourth year (28 to 31 October), the festival is booming under the leadership of a handful of designing women and men who know what the influx of visitors can mean for local businesses.

They’ve talked 22 home and garden owners into being part of the festival and opening their properties between 9am and 5pm daily. Several of them are historic homes, and one, near Hanmer, is filled with treasures — quite literally. Peter and Morag Grant (the same couple featured in the Jan/Feb2021 issue of NZ Life & Leisure celebrating their brightly coloured West Coast bach) are discerning collectors of objects from far-flung places and bygone eras. They will open their magnificent 1917-built limestone home, St Helens, for the tour. 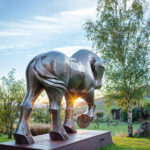 The Gentle Giant has been the star of Raymond Herber’s Iron Ridge Quarry Sculpture Park since he completed it in 2010. Raymond modeled the gleaming, polished steel 2.5-metre-tall sculpture on a local clydesdale stallion. Photo: Rachael McKenna. 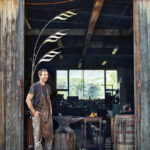 Raymond welcomes visitors to his sculpture-park home during the festival. Photo: Rachael McKenna.

The owner of the Ribbonwood Country House, luxury accommodation overlooking magnificent rolling country near Cheviot and chair of the event, Gary Mitchell, says the vastness of the area makes it more exciting for visitors.

“Every day is a new adventure. It can take all four days to enjoy the gardens, historic homesteads and see the artists’ work along the way.

“There’s no need for visitors to race from place to place; they can take it all in over several days. There are a couple of other wonderful events during this period, too. So it is a country festival with much to see and do.” 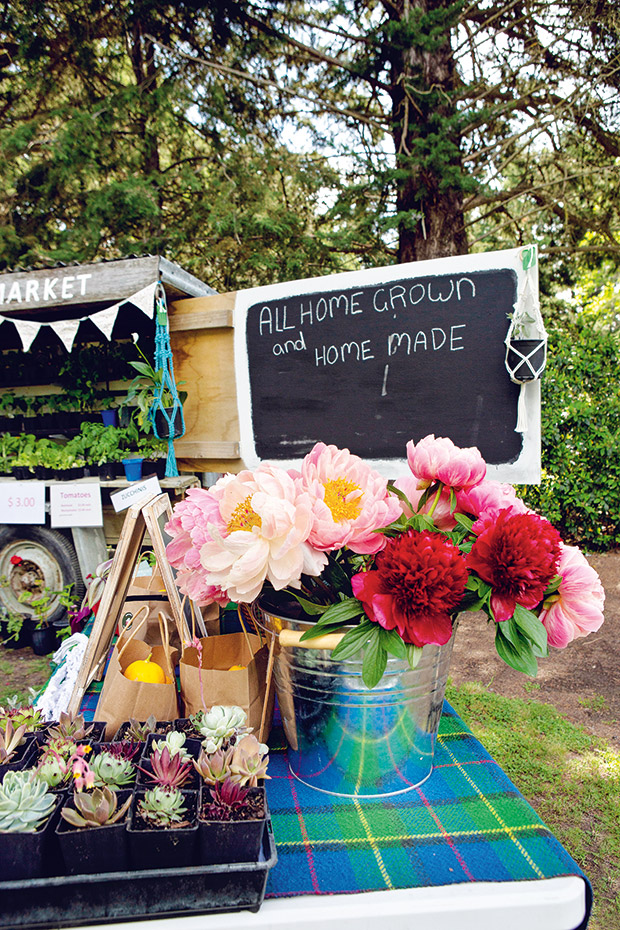 Autumn with Art in Gardens, north Canterbury, 22 to 24 April 2022, autumnwithartingardens.co.nz