Inside Patagonia Chocolates: An Argentinian couple builds the sweetest empire in the Southern Lakes An Argentinian couple built a chocolate business in the Southern Lakes out of a deep longing for the tastes of their childhood.

Alex Gimenez, the man at the helm of Patagonia Chocolates, is an incorrigible chocolate hoarder. His wife Lorena Giallonardo (who he refers to as the company’s brains) knows this because she’s stumbled upon his sweet stockpiles.

“He’s a chocoholic. He makes chocolates for 10 hours a day, and then he gets home and eats chocolates after dinner. One day when I was cleaning the house, I found lots of hidden chocolates, and I was like, who are you hiding them from?”

Alex prefers to think of these covert chocolate stockpiles as the clever strategic positioning of vital resources. “I’m not hiding them from other people, I’m hiding them from myself. It’s about having a stash in case you run out. I hide them everywhere.” When Alex arrived in Queenstown from Argentina in 2002 to take up a job as a hang-glider pilot, he was struck by the town’s similarity to Patagonia (with which it shares the same latitude — 45 degrees south of the Equator). It reminded him of a ski town called Bariloche, known as Argentina’s chocolate capital. Buoyed by this uncanny resemblance, he went in happy search of Bariloche-esque artisanal chocolate shops.

“On my second day in Queenstown, I asked a colleague where all the chocolate shops were. He said, ‘Chocolate shops? What do you mean?’ I said, ‘Why is nobody making chocolates here? One day I’ll open a chocolate shop’. He looked at me like, ‘What the hell are you talking about?’”

Three years and much choccy-hankering later, Alex and his wife Lorena (also from Argentina) launched Patagonia Chocolates. Having worked as a pastry chef with his siblings in Buenos Aires before hang gliding, Alex already had a fair bit of chocolate nous. Then an obliging chocolatier friend from Patagonia offered to fly over to help get the business started. They began crafting eight or so different chocolates using a base of Belgian couverture chocolate and their own distinctive flavourings. 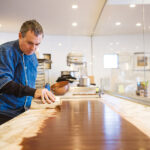 Alex works in the “chocolate room” of their lake-front shop in Queenstown; Patagonia Chocolates produces 25 tonnes of chocolate and 450,000 litres of ice cream per year. 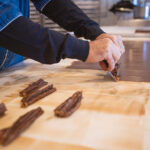 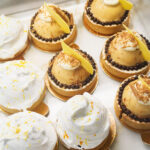 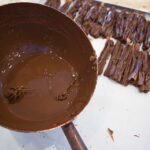 Back then, their premises and equipment were modest: they rented a little 45-square-metre shop in an Arrowtown alleyway with one copper pot (sent from Argentina by Lorena’s dad), a pair of double-boilers, and two small marble tables upon which to make the chocolates. “We were so lucky because Arrowtown is a very cosmopolitan community,” says Lorena. “As soon as we opened, the locals supported us and wanted to try any new innovative flavours we were playing with (such as Mexican chilli).”

One of those supportive locals later told Lorena that she bought more chocolates than her appetite required, fearing Patagonia Chocolates a doomed venture.

“She was there all the time because she thought there was no way we would survive with this business. She’d come and buy something every day. That was another beautiful thing about Patagonia Chocolates. It allowed us to express ourselves with flavours when we couldn’t speak much English, and it brought so many beautiful people into our lives who are now good friends.” Patagonia Chocolates produces 25 tonnes of chocolate and 450,000 litres of ice cream per year.

That kind, business-buttressing Arrowtown soul needn’t have worried. Five months after opening, the demand for Patagonia Chocolates was so high that Alex and Lorena opened a second store in Queenstown. “That was a big gamble,” she says. “We didn’t have any money at all. We made the counters and carved signs on wood ourselves.” They added hot chocolates to the menu (based on the rich, velvety concoction that Lorena’s grandmother used to serve up after school in Buenos Aires) and introduced the concept of a dessert restaurant to Queenstown.

“We thought it’d be great to offer people something sweet to have at 9pm,” says Alex. “Everyone was like, ‘You’re crazy — that’s not going to work. People don’t do that here after they have dinner.’

“After a few years, we managed to change people’s thinking. Now our big time in Queenstown is 8.30pm.” 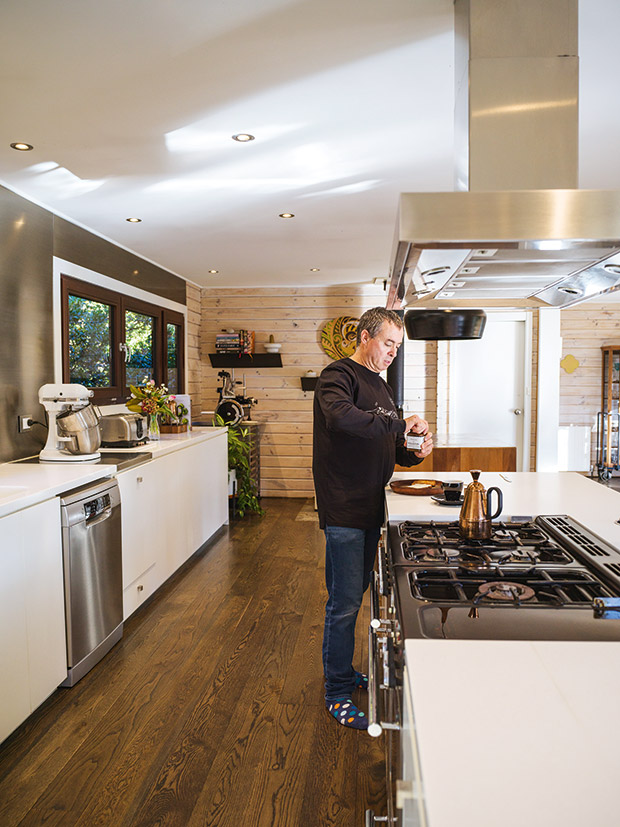 The home is quite the hybrid: a Lockwood house hiding inside a modern cedar exterior.

Ever keen on new challenges, Alex returned to Argentina to improve his skills and learn some tricks from an ice-cream-savvy uncle. In 2007, Patagonia Chocolates added ice cream to its menu and now produces about 20 different flavours. Over the years, the company has won dozens of prizes at the New Zealand Ice Cream Awards. The couple has had ample opportunities to go commercial but is keen to stick to the artisanal path and focus on top-quality, fresh ingredients. “For us, the process is so important,” says Lorena. “The flavour we get is the consequence of all the steps we take.” 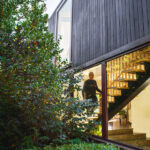 The couple employed Kerr Ritchie Architects to design an extension that would connect with the existing Lockwood structure while embracing the property’s trees. 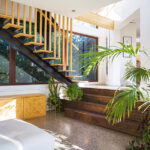 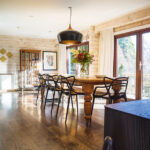 “We also wanted a bigger space that would allow us to have a comfortable kitchen — which is the heart of the home in our culture — and a relaxed space to share time, food and laughs with friends 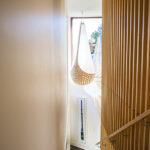 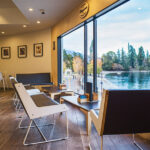 More stories you might like:
How an organic orchardist brewed up a tangy apple-cider vinegar empire in Ōtaki

Alex doesn’t tire of all those steps. He’s a staunch shunner of shortcuts. “When we make dulce de leche, it takes 14 hours. When we make orange and basil sorbet, we wash the basil leaves one by one and spin-dry them. When we make banana-split ice cream, we peel five boxes of bananas. For our cremino, we roast beautiful hazelnuts from Canterbury to make the paste. And we use true cream in our truffles. We’re not prepared to compromise the ingredients to add to the shelf life. Which means, at the end of the day, I must eat any leftovers myself.” (Lorena: “He really doesn’t mind that.”)

Patagonia Chocolates started as a way of sharing treasured childhood flavours. Watching New Zealanders embrace South American and Italian flavours has been hugely rewarding for Alex (half-Spanish, half-Italian) and Lorena (Argentinian with Italian ancestry). Crowd favourites include dulce de leche (a heavenly, gooey “milk jam” confection), hazelnut cremino ice cream, alfajores (Argentina’s favourite treat) and tramontana ice cream (another dulce de leche-rich treat and their bestseller). “New Zealanders are so receptive to trying new things,” says Alex. “I think this is the only country where it doesn’t matter what culture you are from, people will give things a go.” Though deeply passionate about their roots, Alex and Lorena are thoroughly smitten with Aotearoa. “We left Argentina to find a safe place where you could be yourself, spend time outdoors, work hard and play hard,” says Lorena. “We’ve been in New Zealand for 20 years now, and our son Felix was born here. We love to go home to Argentina and Italy for visits, but when we think about how we want to live our life, this is the place for us.” Alex adds: “The Spanish say that the cow is not from where it was born but from where it is grazing.”

These days, Patagonia Chocolates has four café/stores in the Southern Lakes area, including one in Wānaka, where they also roast coffee. Seventeen years and much success later, are they now in cruise mode? Not even close. “We have big plans,” says Alex, all a-twinkle. “We’re great dream-realizers. We have a dream, and we go, ‘Okay, execute it.’ Our new dream is to have a factory with a shop where people can see everything we do. That would be awesome. We’re working on that as we speak.” 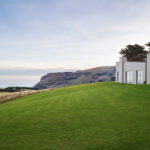 Alex, Lorena and their son Felix split their time between Arrowtown and Dunedin. Their second home sits on the rugged, dramatic side of the Otago Peninsula overlooking the Pacific Ocean (they love knowing that South America sits just on the other side of this wild, watery expanse). 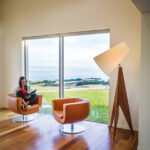 “It’s great to look at the horizon again after years of living surrounded by mountains,” says Lorena. 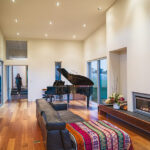 “There’s something special and peaceful about observing the sea, the waves, the sunrises, sunsets.” 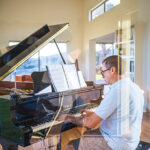 And the grand piano? When asked if he’s secretly some world-famous concert pianist or if the piano is just an elaborate hiding place for chocolate stashes, Alex says: “Oh, it may be a combination of both.”

Visitors to this future factory store will be able to clock the quality, care and time that sit at the heart of everything Alex and Lorena do. It is yet to be discussed whether they’ll catch glimpses of Alex’s secret chocolate stockpiles. 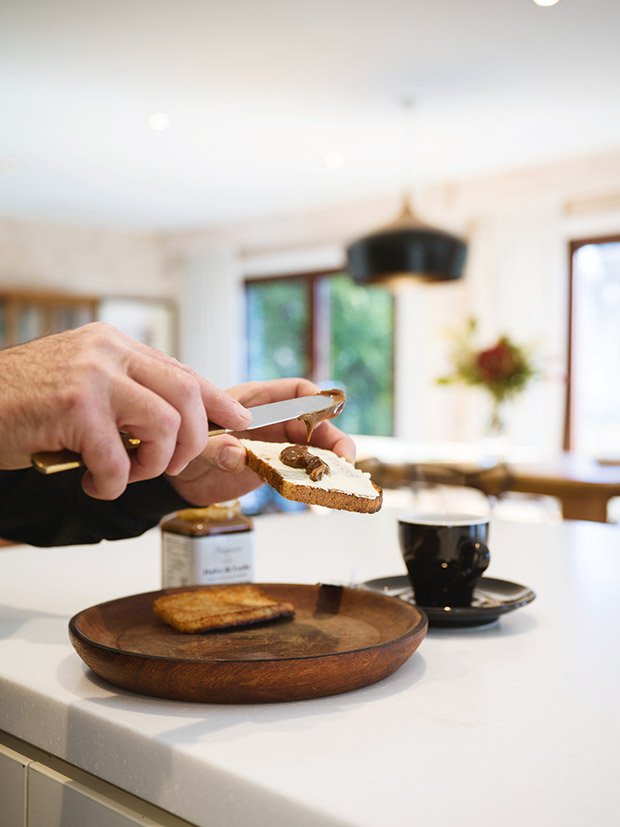 One flavour stands above all others in Argentina — dulce de leche, a sumptuous concoction made by slowly heating milk and sugar over many patient hours. It’s quite the national treasure — so much so that in 2003, an application was submitted to have it declared Argentinian cultural heritage by UNESCO. (Uruguay quibbled with this, saying it should be considered the gastronomical heritage of the Río de Plata region, common to both countries.)

Whole supermarket aisles are dedicated to dulce de leche products in Argentina (especially in the run-up to International Dulce de Leche Day on 11 October). It’s the star ingredient in the nation’s favourite sweet snack: alfajores (which are basically just an excuse to sandwich a lick of dulce de leche between two biscuits). When footballer Lionel Messi was young, one of his coaches would reward him with an alfajor every time he got a goal. When he started getting five goals per game, the coach changed the deal to two alfajores per goal, but only if they were headers.

When asked what he thinks of the fact that roughly a billion alfajores are sold in Argentina every year, Alex says, “It’s ridiculous. It’s a beautiful thing. Even people queuing to get a bus will stop at a dairy and get an alfajor.” Lorena confirms her homeland’s alfajor fever: “My mum sent alfajores back with us to Alex after our last trip to Argentina even though she knows he makes his own.”