In Jim Kayes’ blog this week – the family debates whether to downsize their next pooch.

Maximus died two years ago, and we’re divided over how we replace him.
We can’t really because there is no dog who will ever be as cool as he was in his 14 years with us.
So, as a mindset, we need to just focus on getting a new dog. We almost had one, another mighty rhodesian ridgeback, but we backed out when my wife and the girls worried that he would be too big.
Max was the runt of his litter so wasn’t as large as most male ridgebacks. The boy we had lined up has an enormous father, and that wasn’t what the rest of the family wanted.
“It’s a bad idea,” the eldest declared. “In four years we’ll be gone, you’ll be old and crusty, and there will be a horse in the backyard.” Parts of that statement aren’t true. In four years she (may) be gone, but her younger sister will still have a few years to go at our expense. And while a ridgeback is large, he’s not a horse, though his poo (if I can use that word – I have, so that’s fine) can be a formidable as horse dung. And that is part of the problem. The females in the family want a small dog in every sense of the word.
They want a pooch they can cuddle on the couch – though my wife is slightly contradictory here because she also wants a dog that will stay outside. She has a track record for this sort of inconsistency. When Maximus came into our lives, and before our eldest was born, my wife delivered a stern lecture. The gist of it was that Max was my dog, I was to look after him, and he was to be an outside dog.
“I don’t want that smelly thing inside the house,” was a comment I heard many times before he came to live with us (so I won’t mention here how often I caught her shampooing him in the shower).
We had, in those days, an absurdly small and uncomfortable green couch in what we liked to call the “family living room”. It was basically a large space between the kitchen and the deck that, most importantly, had lino on the floor. So we made Max a bed, penned in by the fireplace stand, in the corner of the room. 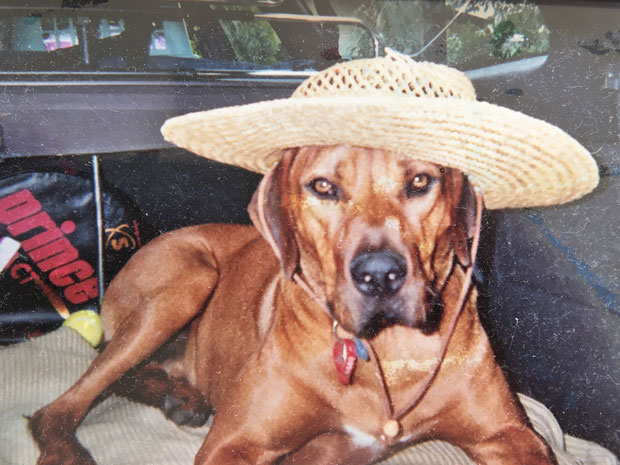 On his first night at home, he whined, sadly enough to rouse my wife. When I woke early in the morning to an empty space beside me I tiptoed downstairs and slid open the door to the family living room. There, on the world’s worst couch, was my wife, sound asleep with a blanket over her and there too was Maximus. Like a turtle poking his head out, he popped out from beneath the blanket, spotted me, and scooted back under cover.
Max grew into a wonderful dog that was, I used to say, a well-fed-door-alarm, but with a physical presence that meant he was also great to have at the gate.
Now the girls want a walking handbag. One of those fur ball things like a yorkshire terrier, maltese, bichon frise or griffon.
They’re the dogs Max used to ignore on the beach, trotting on with his pride intact as they yapped at his heels. We have looked after a couple over the years, and I’ll admit there is a cuteness to them and an ease of care. They don’t eat much, their poo is tiny, and they can let themselves in and out of the house via the cat door (we don’t have a cat, just the door).
But are they really dogs? A mate who has one confessed that when he takes it for walks along the beach he tries to go early in the morning or late at night. That’s no way to live.
I’m trying to find a compromise with a mid-size dog that the girls can handle but keeps my ever dwindling dignity in tact. I know I’ll lose and I fear we will get something horrific like a poodle crossed with a griffon.
It will be a pooch the girls will love for a month and then ignore, leaving it to me to be the dog’s best friend.