Heading for Wellington via Auckland Airport the other week, we were that family; bumbling annoyingly across the carpet, trailing children and jackets from overloaded trolleys and parting the rushing crowds like some kind of on-the-loose virus. Frazzled by the 500 questions five-year-old Vita was firing at us per minute, James and I jabbed lucklessly at the self-check-in screen and were sent by the machine to find a real attendant. While the woman grappled with our children’s car seats, we glimpsed two-year-old Zen waving as his beloved stuffed sheep disappeared through the conveyor belt curtain behind a pile of luggage. 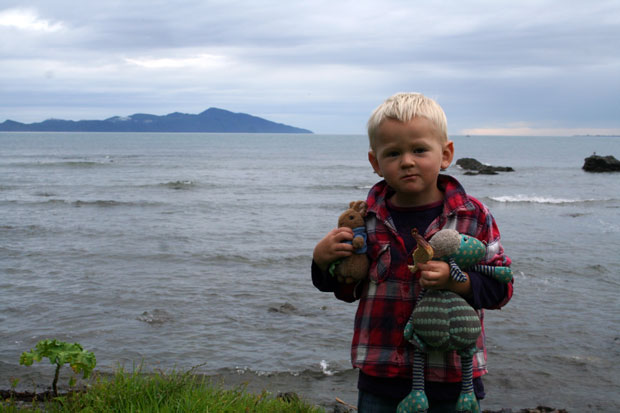 ‘Oh, God. That was Herbert,’ I turned to James as our son’s small face began to pucker. A few false alarms have taught us life isn’t worth living if Herbert goes missing.
We looked around wildly for an emergency stop button, but the attendant was already on the case and leapt heroically onto the conveyor belt, disappearing through the curtain on her hands and knees. After some breathless moments, she reappeared, crawling hard against the moving belt’s flow and clutching the manky toy awkwardly under one armpit.

‘Do they all wear high heels? She looked a bit stuck in that skirt. Why wasn’t she smiling?’ Vita wanted to know as we traipsed away.
On the departure-lounge escalator, we were that family again.
‘There isn’t a single escalator in the whole Far North,’ I wanted to explain to the humourless business men stacking up behind us, as I urged the children forwards.

On the plane, Zen was that child; the one who has a prolonged tantrum because of the seatbelt. ‘Look,’ I finally announced with grim relief, aiming Herbert at the airplane window. ‘There’s Wellington down below.’ 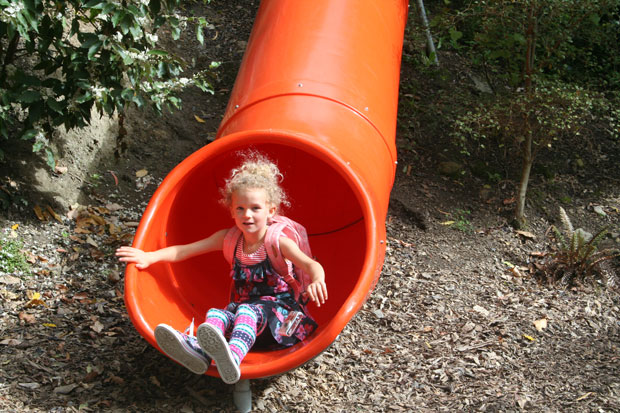 It was like landing into a pair of old jeans for the sense of comfortable familiarity as we descended into the city’s geography of a denim-blue harbour and steep, thrusting hills. Sure there’d been a few cosmetic changes, but as James’s sister-in-law drove us across the city, I could see that below the surface, my old hometown was the same. A geriatric change came over me as I dragged the kids down Memory Lane.

‘I remember the day that sculpture was officially opened. That’s where we got caught sneaking on board an old fishing boat. We used to play up there, where all those houses are. That’s where I learnt to swim. See that window there? I used to work behind it. I took art classes in that building there…’ At the zoo with cousin Isaac.

Pointing out landmarks to the children, I was astonished by the layers of personal history I’d left piled up for recollection in certain neighbourhoods and wondered how many private pasts get erased when bulldozers demolish the present? Some memories are only surfaced by physical triggers, it seems.

It was a trip of reunions, introductions and catch-ups, involving siblings, extended family and friends. With so many people to see, our 10-day itinerary had been carefully planned, and it was fascinating settling into a different household every night or so and seeing how everybody was living.

Vita and Zen will tell you their holiday highlights include trips to the zoo and a hydro-slide. They’ll say a train ride through tunnels was worth remembering, along with a ride to the top of a car-parking building, an elevator and the discovery of an escalator disappearing under city streets.

For James and me though, it was all about conversations and the sorts of connections that effortlessly span distance and time.
Everyone’s life is a story, and everyone we visited had new chapters to share. Nothing is static. Houses had been bought or sold. Children had grown; jobs had been lost and gained. There had been sicknesses, deaths and births. Gardens had been planted, and overseas trips were being planned. The bucket fountain in Wellington.

Some things were startling. Nearly everyone we saw had a ‘P’ tale to tell: an account of immediate family or friends addicted to this soul-destroying drug. This was new. It felt like a black decay creeping in from the edges. As well, we saw friends wobbling precariously on financial tightropes; anxiously balancing weighty mortgage repayments against ballooning living costs.
‘Not everybody’s getting ahead,’ one observed.

As people talked, there was uplift and laughter as well. Visions, dreams, politics, spirituality, memories, and reflections were presented for discussion. More than any meal we took part in; it was this exchange with our hosts that fed and nourished us. And away from the never-ending tasks accompanying life on the land, we relaxed and enjoyed being spontaneous. Surrounded by family and friends, we remembered we belong to a world that’s much wider than our rural community.

More stories you might like:
Lynda Hallinan's Blog: How to sprout a kūmara in no time at all

‘Let’s take this relaxed holiday vibe home,’ I said to James on our last day in the city, but then we turned into that family again, nearly missing our flight out of Wellington. From Auckland, we had to race home before Cyclone Debbie’s rainfall flooded our streams and shut us out. Back on home turf and flooded in, Vita and Zen presented us with a series of behaviours that made adoption look inviting, and we had to put them on the Tough-Love regime. Bucket-loads of tamarillos and apples require preservation. Winter gardens haven’t been sown, ducks are eating the seedlings, and it’s time to harvest more potatoes and kumara.

‘Can we come early?’ the next HelpXers want to know.
James and I sigh and then smile. The holiday is definitely over, but despite all of that, it’s good to be home.