Polly and co take their revenge on rampaging rabbits.

The rabbits were dicing with death. Unaware of the danger, they idled in the herb garden, reducing the chamomile to stalks and obliterating the fennel, sage and thyme.

“Seasoning themselves,” James murmured at the kitchen window. He has a thing for meaty stews.

Across the lawn, bunny Alcatraz stood empty, breached via a loose flap of chicken wire. “You can’t eat family pets,” I hissed so the children wouldn’t hear. “Think of Matt.” Our friend still hasn’t forgiven his parents for serving up Lamb-Lamb with gravy.

“Besides,” I promised, “they’re easy to catch.”

During the darkest hours of last year, when pet-rabbit reproduction had accidentally gotten out of control, and I’d scoured the Far North trying to find homes for them all, we once had 14 escaped rabbits on the lawn and caught them all within the hour. Rounding them up was a breeze.

Only this time it wasn’t. Four-year-old Zendo put in a good effort. Some mornings he chased the three absconders through the bush for a good half hour before retiring. They re-emerged daily, lolloping insolently towards the vegetable beds where seven-year-old Vita lurked fruitlessly with the fishing net. We lunged and cornered to no avail. 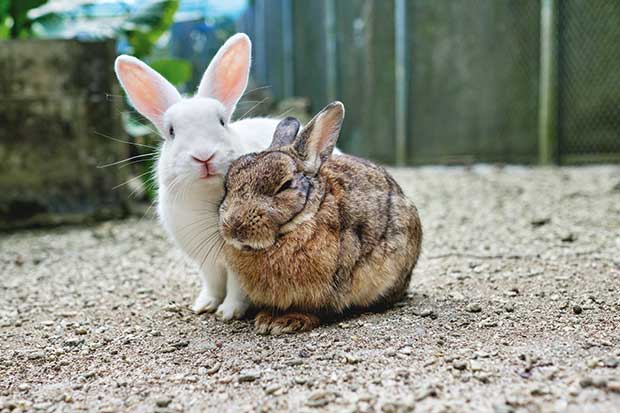 Strawberry plants vanished. Roses were razed. When Coco sauntered past with a feijoa in his mouth, we suddenly grasped why our seasonal harvest had been so scant. “At least they can’t breed anymore,” I comforted but with the discovery of ring-barked citrus trees, annoyance at the bunnies turned to rage.

I nodded appeasement. The conversation about acquiring a pygmy house cow could wait. Ever since I’d released our chooks, roosters and ducks from their runs, domestic creatures had become rather a sore point.

This is what I’ve learnt since the great liberation. Fowl prefer garden greens over slugs and snails. Netting doesn’t guarantee the safety of kale, cabbage or broccoli. The only eggs you’ll ever find from now on will be unexpected and six months old.

Chickens will terrorize young children by pursuing them relentlessly for food and the doorstep will become a communal defecation site for poultry awaiting their morning
maize. The 4am crow of roosters under the window isn’t welcomed either. “Free ranging” hadn’t created the idyllic pastoral picture I had imagined.

So far, seven ducks and five chickens have gone the way of James’ pressure cooker, confirming that revenge can indeed be a dish served hot. After too many barefoot encounters with stinking, sticky bird poo, the children were surprisingly unsentimental about eating our feathered friends but, I cautioned James who was eyeing his rifle. I doubted Coco would sit so well in their stomachs. 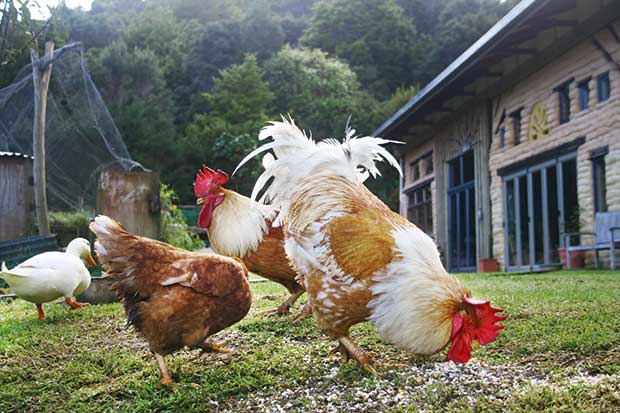 I blame a supermarket cashier for the rabbits’ escape. Scanning my grocery items at the checkout, she’d hesitated as a bag of rabbit food pellets rolled along the conveyor belt. “You’re not going to feed this to rabbits, are you?”

When I told her I was, she sucked her breath in so sharply, a cold wind seemed to blow. “I’m training to be a vet,” she said, “and I’ve just learnt this stuff is really bad.”

“And I am a vet,” the man behind me in the queue piped, “and everything she’s telling you is true.” Rabbit pellets came off the menu.

“Doctor’s orders,” I told the sulky flemish giants who had run over for their morning fix of mortality. They sniffed with disdain at their new hay and escaped within the week.

Avoiding the vet-in-training, I bought a new bag of the addictive pellets and rattled it hopefully on the lawn. From the safety of the bush, the rabbits watched with interest. Like a child lured by lollies, Pippalita, the youngest, inched cautiously forward and was nearly flattened as Zendo hurled himself on her. Next, Coco allowed himself to be caught. Clover, however, opted for independence.

She had time for one last brazen assault on the calendula bed before disappearing forever. A stoat had beaten James to the feast.