It’s taken five years but the electric gate closer is finally connected, much to the delight of the girls.

The youngest wished the job had been done before Halloween as she’d wanted to use the intercom to scare the kids wanting treats but without decent tricks. The eldest is happy she gets a remote in her car – a continuation of her elevation into adulthood.

The sliding gate was installed after a truck, delivering concrete, accidentally reversed into our old gate. The insurance covered replacing it, but not hooking it up to electricity. The now electric gate is a vast change in the security status of our house because, well, there is very little security.

Perhaps because we had a dog for so long, doors are seldom locked when we wander down to the beach and friends are encouraged to drop in unplanned.

It’s Mum’s legacy. She saw friends as vital to the vibrancy of a home and keys as best left under mats or in shoes on the back porch.

As a kid, our security was ensured by a German shepherd that looked tough but was a big softie and a steady stream of people coming and going. 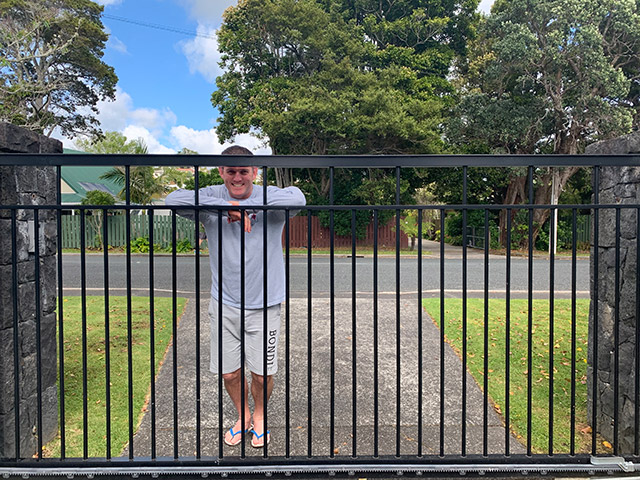 Police friends say burglars are opportunistic, knocking on a front door, and if no reply, kicking it in. As a kid, there was seldom a time when no-one was home.

I was reminded of this recently, not just because of our now electric gate but because of a funeral I attended.

I’d never seen John as a lonely fella, just as a nuisance who arrived at dinner time or when Mum’s tasty scones came out of the oven on Sundays. We used to joke that he could smell Mum’s scones from five blocks away.

I locked him out one day. Home alone, and having seen him coming down our long drive, I dashed to the front porch, grabbed the key and locked the door.

It was juvenile, but I was young. And it worked. Much to John’s amazement, the Kayes’ front door was an impenetrable force.

All these years later, his funeral exposed me to a more rounded view of the man. My sister spoke of his struggles with his disability and sexuality and finished by saying she hoped he was now free of the burden of his body. Her eulogy was quite beautiful.

One man spoke of John’s relentless and selfless work for others who, like him, struggled with cerebral palsy; a woman spoke of the positive influence he had on her at university; another on how John had given him the confidence and strength to “come out”.

One woman spoke with such a severe speech impediment I could understand only a few of the words she uttered but I remain in awe of the courage it took for her to get up in front of a congregation.

These people were the other parts of John’s life and it was a reminder that my teenage impression of John was a skewed one.

Helen Clark wrote to my sister after the funeral. John had been a staunch supporter of the Labour Party and of Clark. This was noted at his funeral and then again by the former Prime Minister in writing.

“John faced enormous difficulties during his life – but he was a battler,” Clark wrote in a lovely letter. “His style was his own, and all the more memorable for it.”

I used to think John’s great passion was politics. It wasn’t. It was people. Which is why he and Mum got on so well.

It’s also why the front door was seldom locked because Mum loved her house full of interesting people. When the electrician left we realised the gate always closed automatically. So we called him back.

“I want it so we can have the gate open,” my wife said, “so people can easily come in.”

It defeats the purpose of the gate a bit we know, but Mum would be pleased about that. And if there is an afterlife, a heaven above, I hope she’s having coffee and a few scones with John.