Jim Kayes’ blog: My musical tastes are heading in One Direction (and that’s downhill)


Jim Kayes has been a journalist for 25 years. He survived growing up with four sisters and is now married with two daughters. Despite this, he thinks he’s in charge. This week Jim blames the girls for a bad case of musical infection.

The most graphic and horrifying example of the disease hit me between the eyes while I was cooking dinner with the youngest daughter and realised we were both bopping away to the music I’d put on.

This wasn’t a case for pride. She wasn’t humming away to U2 or The Eagles, there was no David Bowie or Pink Floyd flowing from the speaker. It wasn’t a Genesis moment, it’s wasn’t a case of the Joneses (Ricki Lee, Grace and Howard) there was no sign of Crowded House, Bruce Springsteen, Supertramp, Bob Marley or anything else written at a time when music was great.

No, somehow, inexplicably, I’d played Slow Hands by a bloke called Niall Horan. I’m still scratching my head. For years I’ve fought the good fight. I’ve slapped away hands that have tried to change the car stereo to The Edge or ZM, steadfastly sticking to The Sound or some other station that, like me, is rooted to the 70s, 80s and 90s.
There was an episode, a few years back when I was carting a load of girls to a Mystics netball game as part of my eldest daughter’s birthday. The rule, according to one of her friends, was that if you picked the station, you had to sing the song it played. They sang every song from home to the netball stadium. In full voice, barely missing a word.
I should’ve known I was fighting a losing battle that night. On the return leg I decided we’d start on my station. By some miracle Hotel California came on. It is, I think, the only non-U2 song I know every word too so I belted it out, flat and out of tune but as loud and proud as I could.
I failed at song two and it was back to the teeny bopping stuff that does my head in. Jim Kayes’ musical tastes are heading in One Direction (and that’s down).

I blame myself. I should be a better influence on them. My musical tastes were passed down by my older brother and sisters with the dial, back then, fixed firmly on Kevin Black and Hauraki, and vinyl spinning on the stereo.
There was the odd misstep especially when one sister seemed fixated on Air Supply, but in general it was a musical education I’m proud of and that’s stood the test of time.
I’ve tried to pass the baton, to be a good role model, but I’m fairly sure I’m failing – though I do enjoy small victories. Earlier this year, driving home from netball training, as the battle for musical control ensued, my daughter and I agreed that we could chose a song each from Spotify. I went first, and Stairway to Heaven, in it’s almost nine minutes of glory, billowed from the speakers.
“This was a mistake,” she declared. She was right. Her songs were brief, repetitive and meaningless, mine were detailed, thought out, beautifully crafted and magnificently long. It was a good car ride home.
But I’ve realised such victories are increasingly few and far between. For some reason Spotify has a virus. It spews out Miley Cyrus and Shawn Mendes, spits forth Selena Gomez and Taylor Swift (I draw a line at Justin Bieber though). 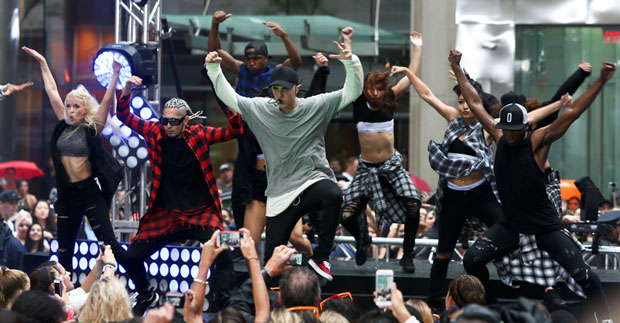 Jim Kayes is not a Belieber

And what’s worse, what scares me witless, is that I know their songs, I recognise the tunes, I don’t know the words, but I hum along and, yes, this bit is true, I’ve been found dancing away to the beats.
There has to be a cure.That night when we were cooking dinner the youngest, when confronted with the startling fact her middle-aged father was playing her music, cackled away before cleaving the generation gap again.
“Stop thinking you’re young and funky Dad,” she said with a smile and a giggle. “And please don’t start dancing.”

Jim Kayes’ blog: Am I turning into my mum?