As Jim helps his daughter rearrange her room, he recalls the territorial bedroom wars of his past.

It was 9pm and somehow I’d been roped into helping the youngest rearrange her room. On a school night, as my mum would say.

She wanted the bed moved from under the window to the other side of the room. It didn’t seem too big a deal even if I was just back from a relaxing few drinks at our local with my wife.

I had been looking forward to telly and the couch rather than pushing furniture around, but it was just one bed. And besides, I can remember being a teenager and doing the same late at night because the fancy took me.

It was almost nostalgic. And then it wasn’t.

After the bed, a shelf had to be removed from a wall and then a photo frame hung and a clothes hook moved off the inside of a door, and then on second thoughts put back on. Detailed coordination of my hands was not forthcoming, it must be said, but the taskmaster showed little sympathy. I tried to do a bunk with the hook mostly screwed back in, but not completely.

“Come on Dad,” she said, “do you seriously want to have to come back tomorrow to finish the job?”

I hadn’t wanted to start the job, let alone finish it, I told her. So she used one of my favourite lines against me. “Do it once Dad, do it properly.”

What I wanted was a wee lie down.

Moving rooms, or even rearranging them, is exciting when you’re a kid and when I was a lad, it was often also about territorial protection. 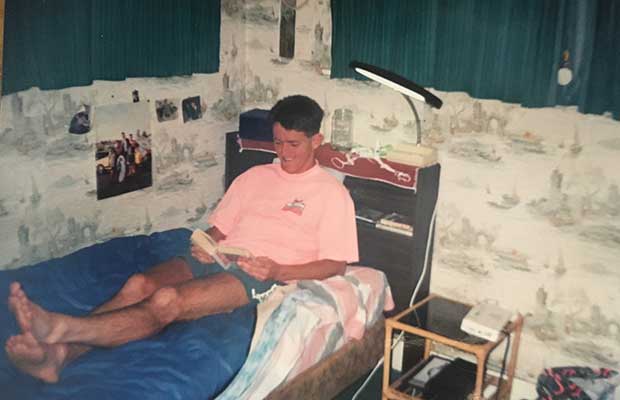 Jim in his room as a teenager.

I shared a room with my younger sister for a while and lines were literally taped to the floor to mark out who was allowed where. In a large family getting a room of your own was a luxury and never to be surrendered. One room, at the back end of the house that caught the afternoon sun, was my oldest sister’s room forever. Even when she had moved out and was living in England that room was “Beth’s Room”.

That is impressive familial domination.

For most of my teenage years, I lived in a garage/sleepout Mum had built when I was very young. It had two bedrooms and a rumpus room. It was superb because it suited my personality. If I wanted to be part of the action (ok, the centre of attention) I could go inside the house, but when I wanted peace to read I simply slipped out to the garage.

And as I got older it was easy to come home late at night (early in the morning) without being noticed by mum.

Though, she was clever about that. If I took her car, she specified the time it was to be returned by and insisted on a goodnight kiss. It was a nifty way of knowing I was home and checking if I’d been drinking.

But back to rooms. The eldest now has a similar set-up to what I had as a teenager and since we’ve installed a heat pump she has restricted her tertiary study options to those close to home.

“I love my room,” she declared the other day, suggesting she was more than happy to stay there for the next three or four years.

“Why would you want to spend money on a hostel when I can live here?” she asked.

And why not. It has its own toilet (a luxury I didn’t have) and a little lounge off it. But her sister is keen for her to leave and has the furniture mover (me of course) on standby. One sign of weakness and the room will be hers.

Her other idea is that we knock out her bedroom wall to provide her with a larger space! She is an almost irresistible force. For now, though, she is content with the look of the rearranged room which is a relief.

After everything was in place and I was ensconced on the couch with the remote, she reappeared, asking if I could perhaps help her make the bed.

Sometimes it is simply easier to agree so off we went, but, again, my attention to detail was poor.

“Oh my lord Dad,” she declared when the blanket wasn’t perfectly aligned with the top sheet, “why did Mum marry someone who can’t make a bed.”

I should have stayed in the pub.