I bought a dozen eggs today. It felt like a breach of contract, but our chooks have begun their autumn moult and balding hens have better things to expend their energy on — most notably new feathers — than our breakfast.

I have a dozen hens. They’re a motley crew of brown shavers, who reliably lay an egg a day, and heirloom beauties who don’t. We used to keep them in separate flocks — the brown shavers in a run by our house, for ease of egg collection, and the haughty heirlooms in a paddock — but when the brown shavers turned their run into a mud bath, as they invariably do, it didn’t seem fair to keep them locked up while their good-for-nothing sisters free-ranged wherever they fancied.

The brown shavers still lay an egg a day but, unfortunately, they have now taken to reliably laying those eggs anywhere but in the nesting boxes in our posh hen house. I’ve found eggs in our shed, in the neighbour’s hay barn, in my herb garden and under a dahlia bush. 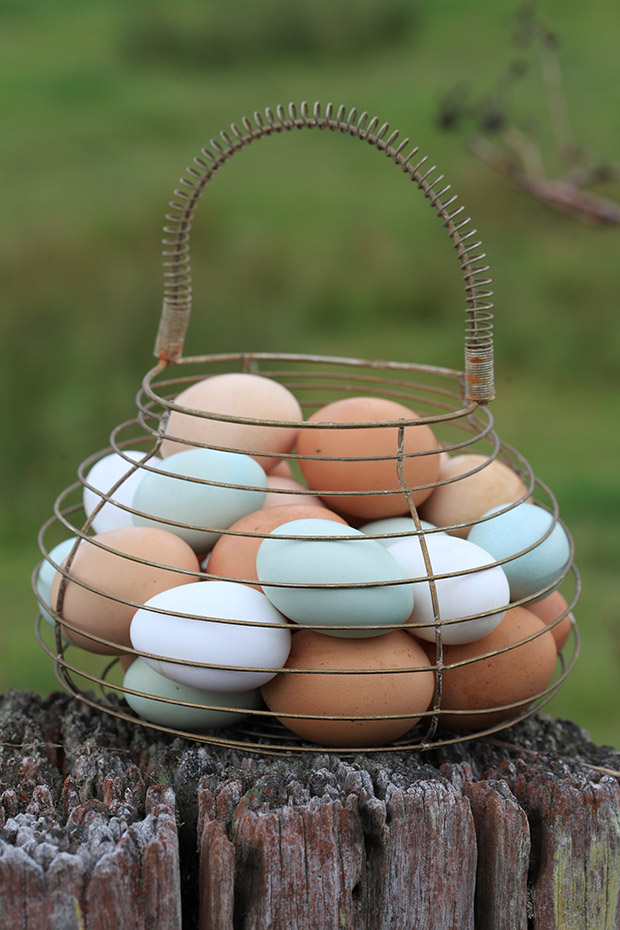 It turns out there’s no vacancy at The Hen & Chick Inn, because the bantam araucanas have all gone broody and won’t shuffle aside to let anyone else sit down and ovulate in comfort. Not that I’ll be counting any of those chickens before they hatch, for of the 30-odd eggs that my broody hens sat on over summer, only one resulted in a live chick – and she showed up with a motherly brown shaver who I hadn’t even noticed was missing for three weeks.

In summer we can’t keep up with all the eggs we get, so autumn’s diminishing egg supply-and-demand situation actually feels like a relief. Space clears in the fridge and we can eat porridge with bottled plums for breakfast instead of eggs over easy, soft-boiled or scrambled.

In winter, whenever I’m asked to bring a plate, I feel no guilt at showing up with store-bought sausage rolls and homemade sweet chilli sauce, whereas at any other time of the year my standby savoury plates are egg mayo and cress club sandwiches — white bread, liberally buttered, crusts cut off — or savoury eggs.

Ah, the savoury egg! Few mouthfuls are as moreish. Also known as delectably delicious devilled eggs, they are the first to get scoffed at funerals, golfing luncheons and garden club get-togethers, long before the salmon blini, fancy sliders, smoked fish vol-au-vents and mini mince pies are wolfed down. A couple of years ago, I hosted a fundraiser at Foggydale Farm for the school gardening charity The Garden to Table Trust. I invited the local ladies from the Hunua Women’s Institute to frock up then twisted the arm of celebrity chef, restaurateur, author, television personality and Garden to Table ambassador Al Brown to join us for a moolah-raising morning tea.

Having been asked to bring a plate, Al decided on passionfruit lamingtons and curried eggs. “Them better be some fancy eggs,” I told the ladies, though I’ve never met a curried egg – hot or cold – I didn’t like.

When I was growing up, curried eggs on toast was Mum’s standby for all those busy nights when time was too short for a traditional meal of meat and three veg. I’m pretty sure she’d never heard of bechamél sauce, but while the eggs were boiling she’d whisk together melted butter and flour with straight-from-the-cow milk and a heaped tablespoon of Gregg’s Curry Powder. When the sauce thickened, the eggs were peeled, sliced and quartered into the pot.

More stories you might like:
From Malawi to Britain to Auckland: Cookbook author Ashia Ismail-Singer’s journey to My Indian Kitchen

Like her infamous boiled mince (flavoured with a packet of Maggi mushroom soup), Mum’s curried eggs were served on buttered white toast that soon turned soggy, making it as effective as a Chux cloth — or a tongue, if no-one was looking — at wiping your plate clean of creamy sauce.

Unlike Mum’s calf poo-coloured culinary creation, I assumed Al’s curried eggs would be served as cold canapés, and I was right. He figured the savoury egg could do with being taken “up a notch or two” on the culinary ladder, so his were swanky with a capital S, the gently spiced filling piped into perfect swirls and garnished with fried curry leaves and slivers of fresh chilli. 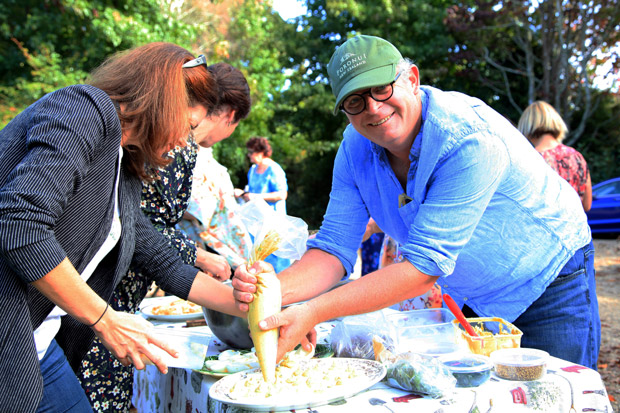 Having bought a dozen eggs today, I’m feeling motivated to whip up a batch of Al’s eggs, because farm-fresh isn’t always best. As anyone with their own hens can attest, eggs straight from the henhouse are almost impossible to peel without leaving half the white stuck to the shell.

Why? According to an intriguing investigation by Wired.com, it’s because fresh albumen has a lower ph which, for some reason, causes the outer layer of the egg white to stick to the membrane inside the shell, rather than to itself. Also, as eggs get older, the egg dries out a little and the air cell inside the shell gets bigger, increasing the gap between the inner and outer membranes.

And here’s a handy hint: if you have no choice but to boil fresh eggs, add half a teaspoon of baking soda per litre of water to tweak the alkalinity and help them slide seamlessly out of their shells. Peel a dozen hard-boiled eggs and slice them in half, lengthwise. Scoop out the yolks into a mixing bowl and chill the whites in a single layer on a tray in the fridge.

Once soft and translucent, stir through 1/2 teaspoon ground turmeric, 1 teaspoon garam masala and 2 teaspoons each of ground cumin and curry powder. Cook for a couple of minutes then add to the egg yolks.

Set aside to cool, then add 1 1/2 teaspoons Kaitaia Fire (or a similar hot sauce), 1 cup mayonnaise and 1 tablespoon lemon juice. Mix with a fork until soft and creamy, then season with flaky sea salt and black pepper.

Use a piping bag to swirl the curried egg back into the halved whites. Chill until ready to serve, then garnish with fried chillis, fried curry leaves, fresh coriander and a sprinkle of dukkah.