Polly’s Blog: Stacks of work to do

One of the lesser known initiations into off-grid living involves servitude to a terrorising document known as The List. Unaware of the power it would come to yield over us, James and I launched our inventory with a series of useful jottings when we first arrived on the land. Titled, Things to do, it included such tasks as finding a drinking water supply, constructing a road, building a home and putting in gardens.
Yet despite more-or-less ticking off those jobs, the list didn’t shrink. Looking back at our innocent selves, we now bark hollow laughter that we thought it ever would. The List is without end, as any homesteading veteran could have told us. So long as the seasons keep turning, chores pile up. Like cells in a petri dish, they divide and grow; divide and grow. Add on a quest for refinement; for outdoor courtyards and medicinal herb beds, grapevine trellises and separate children’s bedrooms and the list extends ad infinitum. 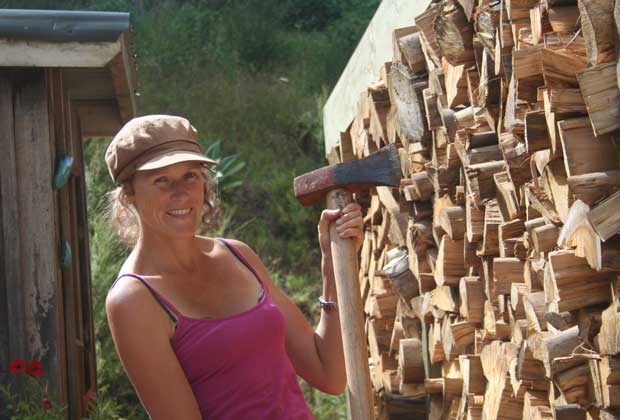 A sign of progression on the land is that our list now has categories, subsets and footnotes. It tails off into realms of pleasant hazy fantasy (the truffled oak circle; the flying fox down from the ridge), but its beginning is always demanding and urgent, with things underlined and shouting in exclamations. Unlike last summer, James and I did a doggedly good job of ignoring the list this January. Novels were read and holidays taken, but the list’s an insidious master, creeping into dreams and pricking our conscience with its 5am whispers of potato harvests, chicken-coop cleaning, seed sowing and firewood cutting.
We had two massive trees to saw up; felled in earlier years and left because our chainsaw wasn’t big enough to tackle them. At the end of January, when the sight of neighbours’ firewood neatly stacked and drying became too much, we finally hired a forestry saw, and James got cutting.
One of the logs lacked drive-on access. My job was trundling up the steep hillside with the wheelbarrow before careening back down with heavy loads, cursing as the wheel buried in hidden potholes, and lamenting for electricity each time the barrow tipped over, and firewood spilled down the slope.
‘You mustn’t speak like that,’ I hypocritically admonished three-year-old Zen over meals as he experimented with his new collection of expletives.
‘It’s better than going to the gym,’ James offered brightly as I headed uphill for the 40th time in sweltering heat. ‘More of an all-over workout.’
Whether our wood dries out before winter remains to be seen. The list is so long; there’s always the option of ticking it off as next year’s firewood instead.
Meanwhile, an unexpected visitor landed suddenly at the list’s top position. Six-year-old Vita dumped it there during a summer storm.
‘Save it, save it,’ she shrieked, depositing a newly hatched baby bird on the chopping board and weeping dramatically into my side. 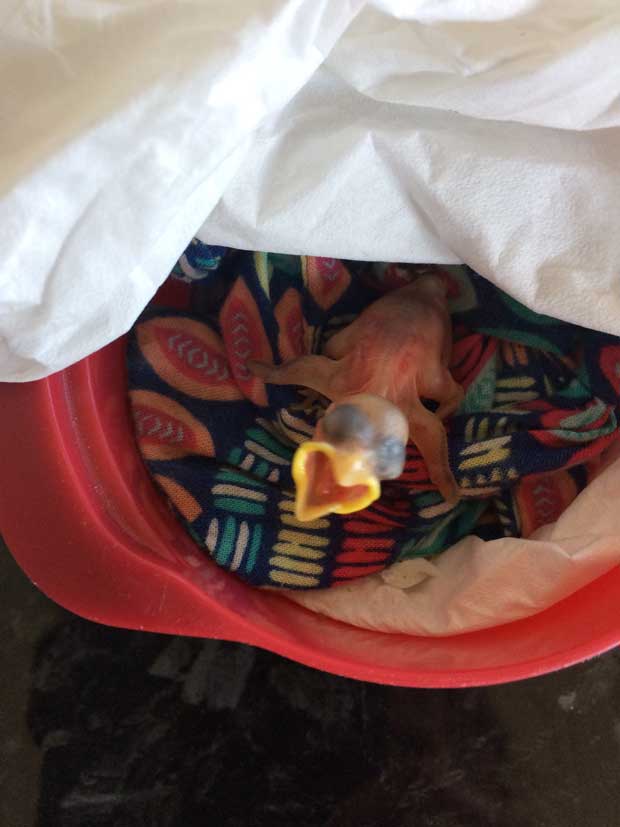 It was a tiny sack of translucent pink skin with hair-like veins and purple blood blisters for eyes. When it opened its yellow beak, an entire universe of critical need and burning dependency gaped before me.
‘Why don’t you put it back where you found it,’ I suggested lamely as torrential rain flash-flooded the lawn. Of course, Vita couldn’t.
‘Do something,’ she cried, still full of faith in my superpowers.
The children fashioned a nest from kitchen utensils before I poked gobs of fish down the creature’s gullet.
To my dismay, it survived the night. I had to go out the next day, so the baby bird came too, accompanying me in its measuring-cup.
Babies are meant to look endearing. Cuteness is a survival mechanism for helpless beings, supposedly twanging at our heart strings and reducing us to obliging servants but my baby bird was so ugly, pity and mild repulsion were the only sentiments it raised.
Imagine being that unloved.
Feeling ridiculous at taking on the task, I tweezered food down its beak at 20-minute intervals. The job’s demands lightened momentarily as I considered the reward of a hand-reared pet tui or falcon perched on my shoulder, but deep down lay the awful suspicion I was raising a sparrow.
As if burdened by its many shortcomings, the bird stopped lifting its head.
‘It’s alive,’ Vita sang when I brought it home later, but only just.
We placed it out in the garden, where I hope it slipped quietly into the birdsong of a wide blue-skied afternoon.
Over at the bunny enclosure, Clover had just given birth to baby rabbits. The children poked the lifeless, ugly bird, silent for a moment and then they turned back to life’s calling, running to be first inside the hutch.
I went indoors to add ‘neuter rabbit’ to the list.