Jim defends the English language as his youngest muddles it up with acronyms and alternative meanings.

It’s a text that almost brought me to tears.

The eldest had offered to pick up a few things from the supermarket and fired through a note to confirm what she’d bought.

“I brought bananas thinking I was being forward thinking but you’d already bought them,” she said, leaving me distraught not at the fact that we now had an oversupply of bananas, but at the second word in the text.

So I replied: “You can bring home a boyfriend with his nose pierced and tattoos but you cannot use brought when you mean bought.”

English is a confusing language, as our lovely Japanese student who is with us for the year knows all too well, but it’s not that complicated.

She admitted she knew it was wrong, and blamed auto correct, but that failed to ease the pain. Nor does the fact I know she’s intelligent and on track to do great things with her life. It’s because some words used wrongly grate more than others.

Brought instead of bought is near the top of my list alongside the misuse of their and there, and when to use I and me.

Recently, my sister and I simultaneously corrected her university-attending daughter when she said ‘me’ instead of ‘I’. 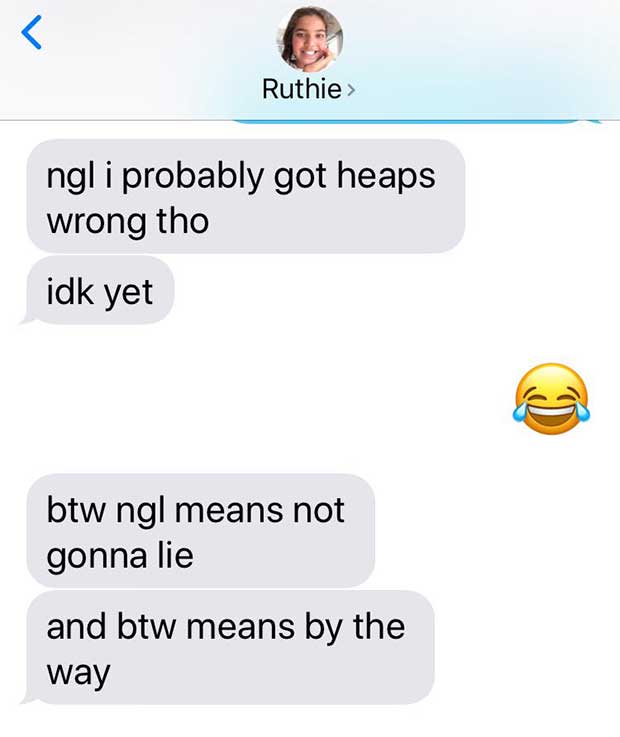 She rolled her eyes at us and I mused that the echoes of our English teacher mother are still strong.

I’m engaged in a losing tussle with the youngest over her text messages because her obsession with acronyms (though many strictly speaking aren’t acronyms) is driving me crazy.

The other day, as she was spamming me about a math test she’d found easy, she reached uncharted territory when she fired through acronyms and then explanations.

“ngl I probably got heaps wrong tho.”

“and btw means by the way.”

And “idk” means I don’t know, which is pretty much how I feel when I ask myself if these strange creatures I call my daughters are actually mine.

Yes, yes, yes, I know languages change. I used to tease mum that we didn’t speak as Shakespeare wrote so she had to get used to different uses of words.

But allow an old curmudgeon a few minutes to bemoan not being able to understand what should be a simple text message.

Part of the problem is that she has slipped from a smartphone to a version of the old Nokias we used to have, so typing out the whole word is painful.

And I sense that part of the issue is that she knows it winds me up.

Driving to the bus on a recent morning she revealed Maori was her favourite subject, equal with Spanish which was taught in the first half of the year.

“Perhaps you have an ear for languages,” I suggested, which led to a savage assessment of some of the silly rules in English.

She’s not impressed by the use of silent letters and arrangements like ‘ough’ and ‘ight’ for words like dough, rough, tough, cough, night and right.

“Who was it that decided to just throw all these random letters together to make words that don’t make sense?

“It’s left me very discombobulated,” she said with her trademark cheeky smile.

Discombobulated indeed. She should read back some of her texts if she really wants to be confused.

As for the eldest, she’s using a computer app that types out her speech as she ploughs through endless school assignments.

It’s a nifty thing but she admits she has to re-read everything because it does, at times, misinterpret what she is saying.
I know how it feels.

And she’s adamant that when it comes to her texts she is regularly betrayed by predictive texting and that she knows the difference between bought and brought.

Which is just as well because there is no way a dude with a pierced nose and tattoos is getting through the front gate.