A bonsai collector shares the lesson of caring for artfully pruned trees.

The meticulous clipping of a bonsai may not seem demanding, but for enthusiast Jay van Lent, it is equivalent to caring for a baby. One wrong move and it could be another decade before the bonsai is perfectly balanced again.

The Auckland-based landscape designer blames his addictive personality for the 60 bonsai in his 180-square-metre Christchurch garden (now looked after by his parents). Jay got his first bonsai at age 21, and the seemingly innocent hobby soon spiraled into enthusiasm.

“The addiction started from there,” he says. “I just kept buying them.”

The ancient Japanese art form can take decades to master and requires physical and emotional patience. That was an instant draw for Jay, who found that clipping and shaping a tree was meditative. “Bonsai calms me and stops my brain from thinking. All my anxieties leave my mind as I focus on clipping and cutting,” he says. 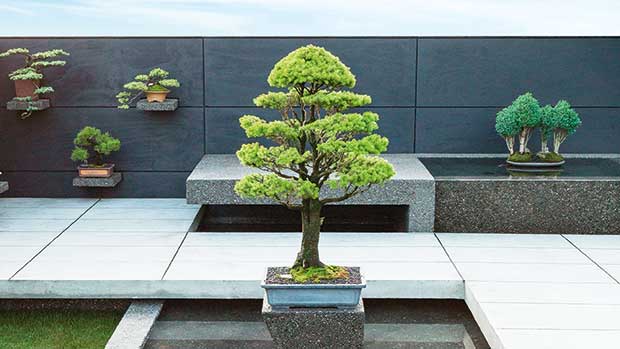 He didn’t realize bonsai could be so enthralling until he met his mentor Alan Van, one of Canterbury’s early bonsai masters. “Alan would nearly hit my hand if I did something wrong. I had to do everything correctly because bonsai is a serious thing.”

Decades of training are apparent in Jay’s garden today. Teeny bonsai are perched on dramatic concrete cubes while 30-year-old maples add fiery orange to the predominantly green garden. It’s a thriving, meticulous collection, but Jay would be the first to admit he’s made a few mistakes.

When he struggled with substance abuse after splitting with his wife, his bonsai collection suffered from years of neglect. His attention only returned to the garden when three of his bonsai – all decades-old and two inherited from Alan – went missing in 2017.

“It wasn’t until those trees were stolen that I realized how important they were to me. It was a real kick in the guts and a massive turning point in my life. So instead of partying, I started spending more time with my trees and getting into the garden.

“My hobby has been a big part of my rehabilitation. I reconnected with the bonsai by caring and nurturing them,” says Jay.

Many bonsai collectors have trees that they’ve nurtured for decades – in some cases, bonsai are a living extension of the family, and when it’s time to retire, many enthusiasts prefer to gift their trees than sell to a stranger.

“Some bonsai don’t have a price. For collectors, it’s not about the money. It’s about passing them to someone who’s going to keep them living,” says Jay, who has inherited several bonsai from retired collectors.

The art of bonsai requires more just than precision and a steady hand. Successful collectors must remain resilient after an imperfect trimming or even worse – a tree’s death. Reflecting on his own losses, Jay says that the hobby can teach people how to move on in life.

“I’ve killed some really old trees. But the best thing about bonsai is that if it dies, you get over it and start again,” he says.

Jay knows a thing or two about starting over. After sobering up two years ago, he moved to Auckland to try garden design. His landscape design company, called Arko, combines his pruning skills and those he learnt while running his parents’ concrete business to transform gardens and sell bonsai.

I've had an awesome time over the last month working with the kids from Transformation academy teaching about the art of bonsai, nature and healthy hobbies. #youth #ourfuture #Auckland #bonsai #tree #forest #nature #hobbies #inspire #mothernature 🙏

Jay hopes that by selling bonsai and teaching workshops, his hobby can serve others as it’s helped him. Earlier this year, he taught at-risk teenagers how to prune, shape and re-pot a bonsai at the Transformation Academy. His most important lesson? Accept failure and start again with a new tree.

“Bonsai is a great way for people to learn to care for something and have pride for it.”

What is it? Bonsai is more than a perfectly clipped tree. Jay defines bonsai as studying the art of nature and telling the story of the tree with clipping and shaping.

Bonsai isn’t restricted to one species or size. “Even plants and shrubs can be turned into bonsai,” he says.

How to start? Jay recommends beginning with a Juniperus procumbens ‘Nana’ and keeping it outside (never inside, he says). Learn clipping techniques on YouTube or at a bonsai society.

“Have a bit of fun by snipping and making shapes. Who cares?” says Jay. And if the tree dies, don’t give up too quickly. “Although bonsai is a personal thing, you just have to start again.”

How to make a perfect kokedama, Japanese moss balls

Kath Irvine’s pruning fundamentals: When to prune and the three golden rules of pruning