Some like it pop: Former DJ finds his groove with comic book and graffiti style 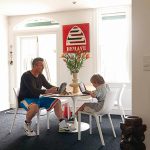 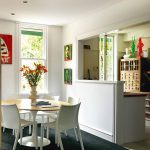 Eating out and socializing is one of Matt and girlfriend Cristina’s favourite pastimes so his kitchen doesn’t get much use. 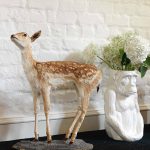 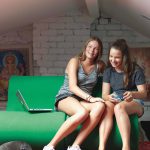 The loft is the haunt of Matt’s daughter Bella and good pal Sofia (Cristina’s daughter). 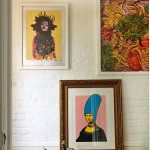 “So wrong but so right,” is how Matt describes the Mona Simpson print by English artist Nick Walker in the hallway. 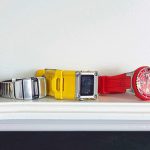 Matt says he has a bit of a thing for watches and sunglasses. 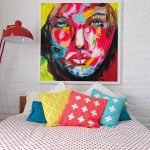 Another new venture for Cristina (she’s also moving into real estate) this year is importing artwork from South America. The neon piece in Bella’s bedroom is an oil-on-canvas replica of a Françoise Nielly. 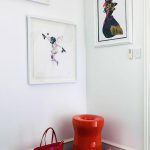 A Taurean, Matt says the bull is his blood. The bull artwork by Antony Micallef is one of a series of three and is one of his favourite pieces.

A former DJ- with an intensely colourful streak- is dancing to the beat of his own drum in the Auckland urban jungle.

This article was first published in NZ Life & Leisure March/April 2016. 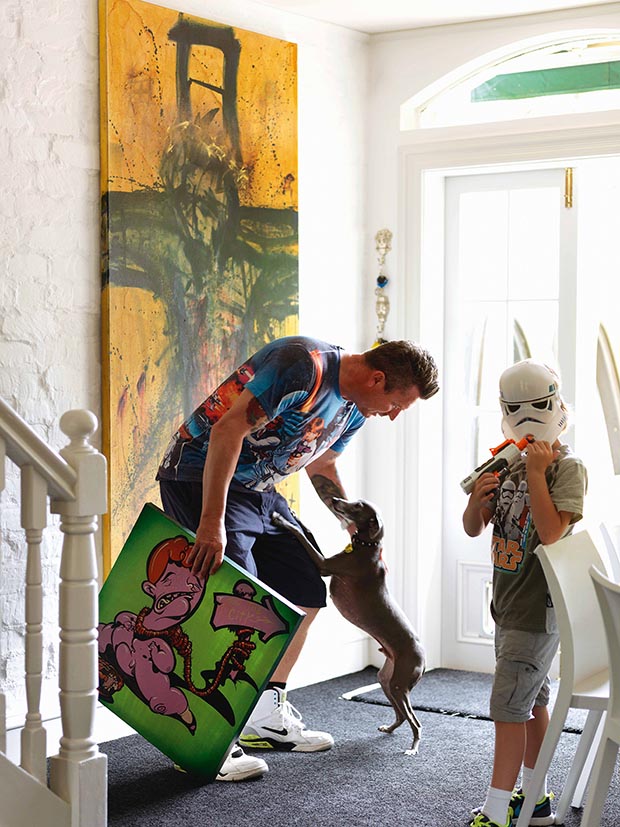 Matt’s favourite part of moving to a new home is deciding where to hang his art. The Jesus-on-the-cross painting by John Madden is one of several Jesus artworks and sculptures in the house. The green artwork in Matt’s hand is by Kiwi spray artist Elliot Frances Stewart.

If only the world could get along like the characters in Matt O’Brien’s home. The former DJ-turned-real-estate agent’s townhouse in Auckland’s Grey Lynn is a jumble of colour and culture – think UN peace summit in a funky disco. Matt imagines the taxidermy zebra head had many owners before he bought it at an auction in Auckland. “I love him – he reminds me of something from Alice in Wonderland,” he says.

Circling his living room are artwork and pop-culture figurines from each of the four corners – a neon Harajuku-girl painting, a Mãori carving. The Six Million Dollar Man chats with African tribal ladies and then there’s Jesus Christ himself. An elder-statesman zebra (head-only) presides as secretary-general.

Matt’s home is a collision of worlds but between the mad competing ideas is a peaceful dissonance that comes with abandoning the rules. “The clash creates a real energy,” Matt says. “My life is all about having fun and making the most of things so I try to have colour in my life. I want my kids to grab life.” 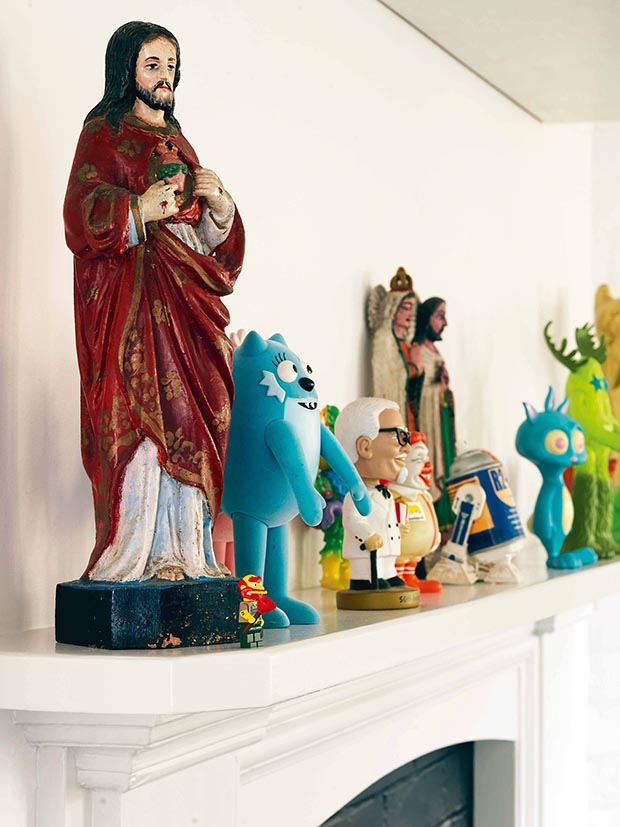 A Jesus sculpture bought in the Portuguese settlement of Kerala in India hangs out with a toy from the kids’ puppet show Yo Gabba Gabba!

Matt’s home, filled with competing customs and ideas, reflects his working life, which is at times like a conflict zone. Today he’s on the frontline of Auckland’s real estate market, the Barfoot & Thompson CBD auction room on Shortland Street. Inside, bidding tug-of-wars take place between couples hoping to plant their flag on a piece of the quarter-acre dream – a dream now downsized to a more affordable two-beddy townhouse (this is the City of Sales, dude). 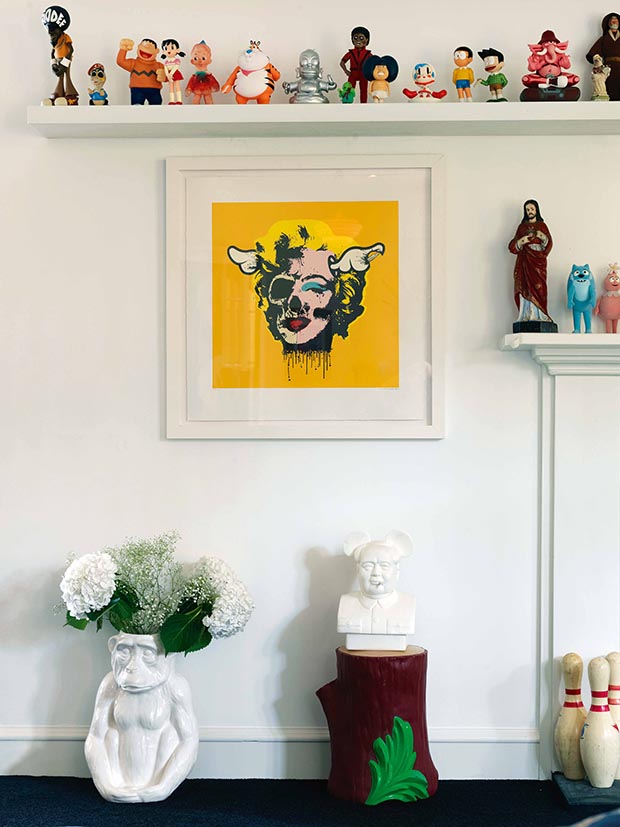 There’s more emotion than a Shorty writer could ever muster – the dash of the auctioneer’s gavel giving rise to the squealing elation of bidders, who have bought their home after months of hunting, and reducing would-be buyers to quivering messes, their future plans dissolved in seconds. Facing such a daily gauntlet of feelings might lead some to prefer to come home to a defragged world of beige. But not Matt. “I love the energy of the city – I’m the sort of person who would rather have a view of the city than the country,” says Matt. “For me colours don’t need to go together. I prefer to have a contrast and for things to clash.” The wild Auckland property market has helped Matt provide for his two children Bella (14) and Bobby (eight), and connecting successful buyers and sellers is immensely joyful, he says. And he loves Auckland. A bit of his heart is mixed in with the mortar that holds together the city’s hodgepodge landscape of brick-and-tile state houses, grand old-dame villas and upstart millennial pads. 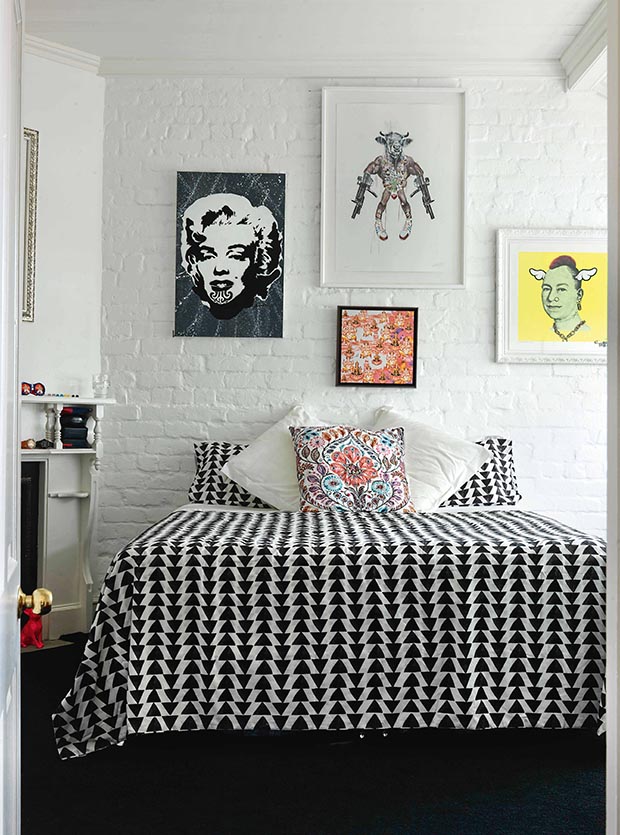 Matt saw the Marilyn-with-a-moko artwork sprayed on a wall in Auckland. He tracked down the artist (called Scum) and asked him to spray it on a canvas.

Matt’s role as property expert on television’s Our First Home is a chance to help couples who might not otherwise get their foot on the property ladder. The TV One reality show which aired last year sees him guide three young families as they buy and sell their first home. His DJ name OB1 is a tell-tale sign of Matt’s love of Star Wars, now passed down to “stormtrooper” Bobby. “The first Star Wars movie came out when I was six, the same age as Bobby is now. I was Star Wars mad when I was a kid and Bobby is now that he’s watched all the movies… Being a Star Wars nut is almost right of passage.”

“It was nice doing something like this, I didn’t realize how much the show and the families would mean to me,” he says. Christchurch-born Matt’s colourful streak was visible from an early age – literally the time his mother Saskia, then a hairdresser, first had her way with her dyes when he was five. He finished school without ever completing a curriculum book from cover to cover before deciding to dance to his own “doof doof” beat as one of the founding DJs in the 90s dance music scene in Christchurch. 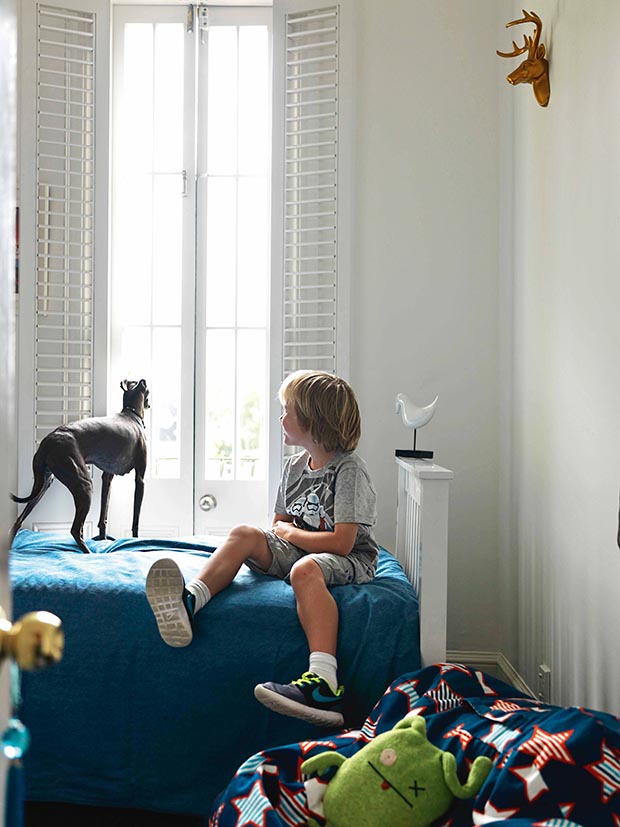 But after partying his butt off for a few years as his musical alias, DJ OB1, he travelled to a galaxy far far away – Osaka, Japan, where he worked as a kindergarten teacher by day and DJ by weekend… “a bit like the movie Kindergarten Cop”. The social isolation of not speaking a lick of Japanese when he arrived taught him to be comfortable in his skin. “It brings you back to that basic human-instinct stuff; you’re down to the real basics of human communication – a total contrast to where I’d been nattering away in rave-land.” A year DJ-ing in London followed but it didn’t gel with Matt, and he returned to New Zealand to help 15,000 Kiwis dance the night away in the new millennium at The Gathering Festival in Canaan Downs, Motueka.

“DJ-ing and dance music for me is all about forgetting the rest of society and having an amazing time. It’s this incredible energy exchange.”

His daughter Bella arrived in 2001 and one thing his DJ-ing had prepared him for more than most new parents were the sleepless nights. Fatherhood was a wake-up call, he says. Paternal instincts didn’t happen overnight; yet the urge to provide for his child saw him hang up his headphones for a job in radio advertising sales. 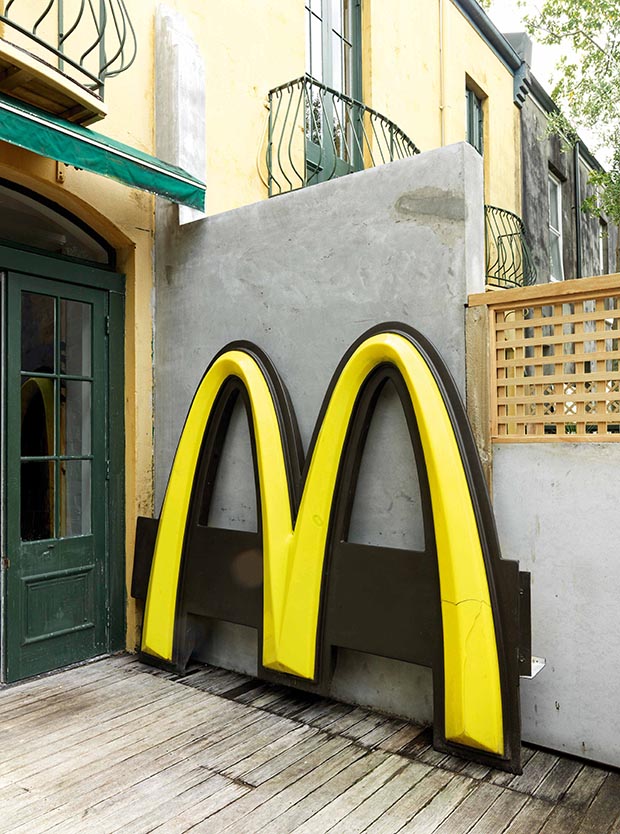 He’d worked his way to being one of MediaWorks’ top sales performers when redundancy came out of nowhere. It was a shock. Matt credits his parents and jewellery-designer sister Brigit with arming him with the skills to turn around his misfortune. “Redundancy made me realize I was resting on my laurels… the experience let me rewire my brain.” Music will always be in his bones, but now his art collection is his main creative outlet; that and the self-deprecating real estate videos he makes in which he mocks real estate clichés, such as baking cookies for open homes. “Did you know six per cent of Kiwis are gluten intolerant? That’s why I’ve baked these gluten-free almond meal and quinoa cookies. Celiacs bid at auction too you know,” he says in one.

With the Auckland property market the way it is, Matt could work as many hours as he wants – open homes mean his weekends are fragmented. But he’s careful to draw a line. He makes the most of his time with his kids and Argentina-born partner Cristina, packing their days with walks with the family dog – an Italian greyhound called Mini – concerts, and fishing in the Waitemata Harbour. “You have to make sure there’s an off switch and to make the most of it – especially when it comes to my kids since I don’t get to see them all the time. It’s about maintaining life balance; real estate isn’t going to get any quieter. I’m so about keeping things in check.” 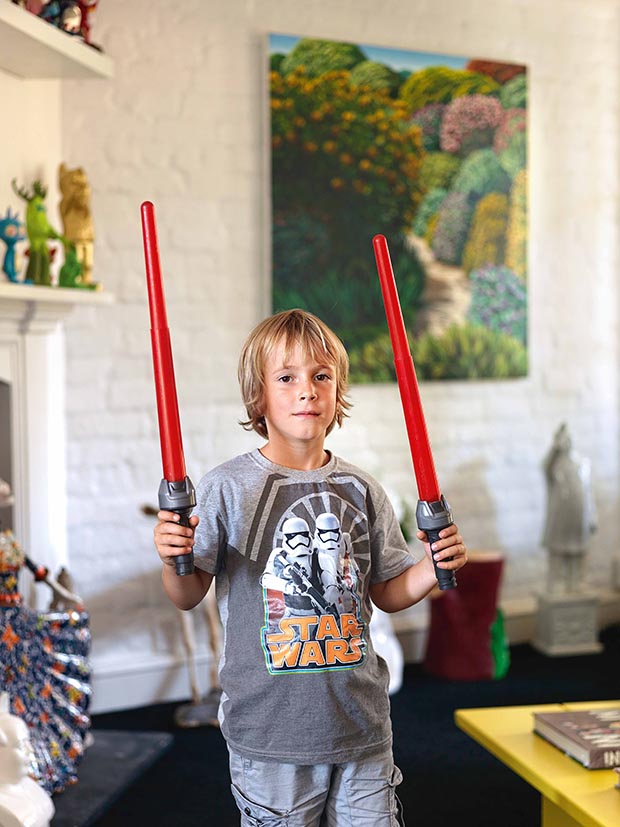 HOW THE COUPLE MET

While suited-up as Captain America at a costume party a year and a half ago, Matt asked Cristina, a Charlie’s Angel, for her phone number. The Auckland-based pair had met before – Cristina’s 15 year-old daughter, Sofia, is friends with Bella – but in a room filled with superheroes she wasn’t quite sure it was the same person. “I was pretty sure it was him but I had to ask him to take off the mask,” says Cristina. Cristina is a 3D-animator, who has worked on Nickelodeon shows such as Penguins of Madagascar, Fanboy & Chum Chum and Robot Monster. “I used to go to see animated movies on my own and I was so happy when I had kids because I had someone to go with,” says Cristina, also mum to Marcos (16). She’s at home among Matt’s toys and figurines and the couple plan to move in together later in the year. “We like the same things, we both love travel and pop art. Matt’s really genuine and authentic and we have a colourful social and entertaining life together,” she says.

1. Don’t get emotionally attached to homes before an auction to save tears.

2. If you are a buyer and keep missing out at auction, work with a real estate agent to be on the alert for properties in the right price bracket so you can scoop as soon they come on the market.

3. Trying to add value for re-sale? The old indoor/outdoor flow does it every time, as does creating an extra bedroom.