The enterprising Martinborough sisters behind Thunderpants – the intentionally unsexy underwear The Bidwill sisters in front of Thundies HQ in Martinborough. The mural was painted by Greta Menzies, who does many of the sisters’ textile designs.

A pair of Wairarapa sisters are two decades in to making comfy underwear designed for the wearer, not the viewer.

Josie and Sophie Bidwill are wearing identical black tights covered with tiny, colourful triangles. They often unintentionally wear the same clothes. Sometimes – frequently in fact – they discover they separately went to the same café for lunch, even ordered the same food. When they look at each other, they often laugh.

The sisters live a block apart on the same Martinborough road, just a couple of streets away from their ethical clothing and underwear business, Thunderpants. Their 90-year-old mother Joan lives over the back fence from Josie and her renovated, stucco house. 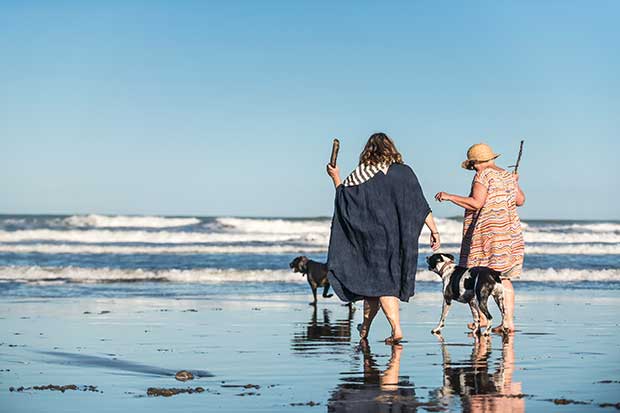 Sophie and Josie Bidwill at Riversdale Beach with their two SPCA dogs, Pebbles (left) and Boo.

During summer weekends and in the holidays, the pair often retreat to the family bach, a 1960s beach house hidden in the dunes at Riversdale Beach, where they spent whole summers as children. Their lives are so interwoven that when they aren’t working, they share meals or spend time with family and their many joint friends. They take turns at popping a meal over to their mother each evening. Both are keen cooks – Josie (57) cooked for a career for 15 years and Sophie (49) followed her into restaurant kitchens some years later.

They each have a daughter, teenagers they jokingly nickname Ebony and Ivory. Billie (14) is Sophie’s daughter, pale-skinned with white blonde hair; Maddy (13) is the daughter of Josie and her partner, Tahir Ali, of Fijian Indian-Polynesian decent. The cousins spend so much time together they could be mistaken for sisters.  “They share a love of horror films,’’ says Sophie. 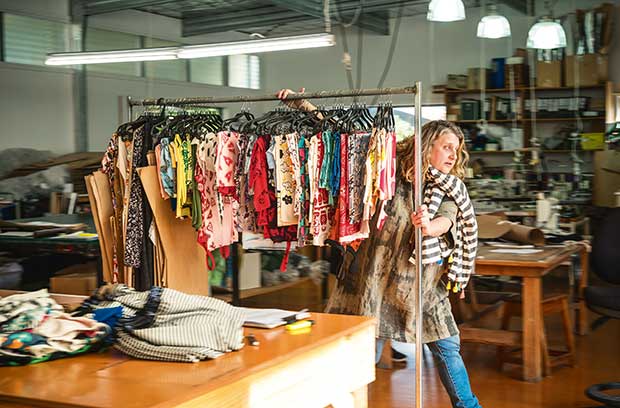 Thunderpants are go… Sophie with a rack of designs inside the company’s workshop.

Josie and Sophie and their three older siblings, sisters Kate and Becky and brother Sandy, grew up on a farm in Kahutara in the Wairarapa, which Sandy now runs. Josie was eight when Sophie was born – the family story is that their parents had a naughty weekend in Rotorua and Sophie was accidentally conceived. Josie set up Thunderpants in 1995 and Sophie joined her two years later. The brand’s legacy dates to their childhood when the sisters and their siblings nicknamed their large  bloomers “thunderpants’’.

Josie has pedalled a sewing machine since she was a teen at Woodford House in Havelock North, and has a passion for screen printing. Sophie is an artist and ceramicist, who when not running the company’s production line is moulding clay in her ceramics studio. 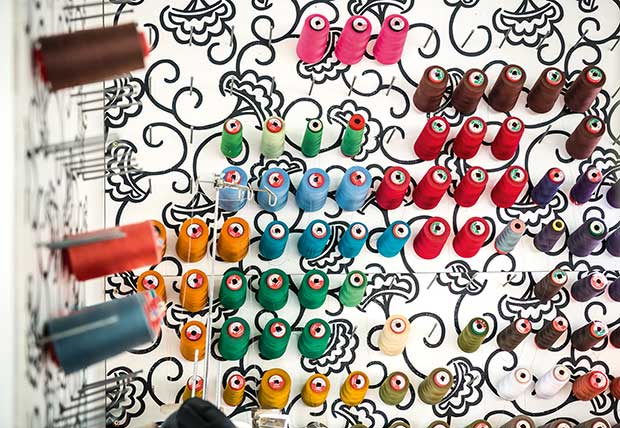 The sisters are advocates of slow fashion – a movement similar to slow food embracing quality, fairness and sustainability – and from the sunny deck at Thunderpants headquarters in Martinborough they observe that their business is as big it needs to be. They’ve always designed clothing for “authentic” people – a value that has become more important over time. “We are often told to send our garments to social influencers. We’re not interested… unless they’re hairy and authentic,’’ jokes Sophie. 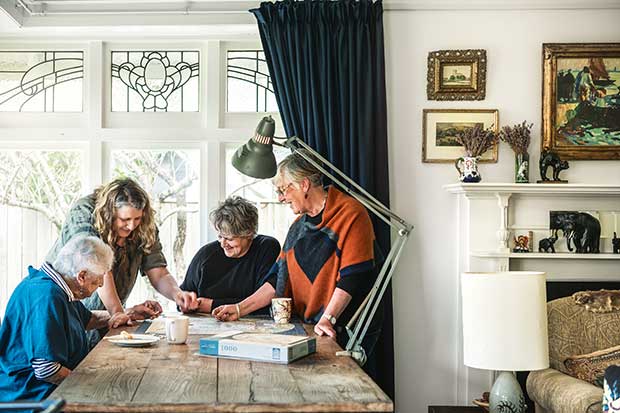 They never follow fashion fads or launch seasonal ranges and the business must fit into their lives. All five full-time equivalent staff are paid a living wage and the sisters say they love their work as much as they do. Babies and dogs are welcome in the Thunderpants headquarters. “We have always said people over profits so staff can pretty much do what suits them as long as the work gets done. If they need time off, they take it. If they have a crisis, they don’t need to worry about work,’’ says Josie.

Built to last is not just an ethos. One story is of a young boy who wears a pair of Thunderpants boy’s undies handed down by his older brother, who inherited them from an older cousin. Inside their workshop and pop-up store, kids’ leggings decorated in a banana print dangle on hangers near a black Thunderpants bikini made from recycled nylon fishing nets. Each is symbolic of what makes the Bidwill sisters tick – they like to have fun, they spend a lot of time laughing, and they care deeply about their community and the environment. 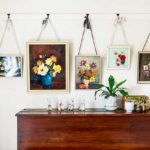 All of Josie’s flower pictures were found at op shops or were gifts from friends. “Flowers are really hard to paint and I love looking at how people manage it”. 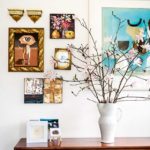 The large white framed painting (on the right) on a gallery wall in Josie’s house is by elder sister Becky. The small dog picture was a gift from Josie’s daughter Maddy. 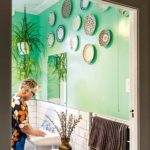 Josie wanted to find a better way of enjoying her plate collection so she now displays them in the bathroom. 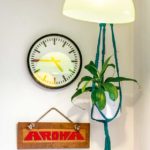 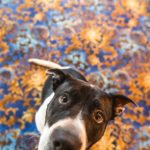 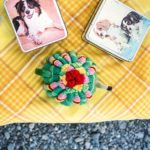 Undies are the biggest seller of the 50,000 Thunderpants items sewn annually by a team of Carterton women. While they have introduced other garments over the years, and even a bed-linen range, Josie and Sophie are best known for their undies. “Thundies’’ are comfortable and long-lasting, designed for the wearer – not the viewer.  Says Josie: “We are bigger people ourselves, so we understand that once you get to a certain size, the grading gets all wrong. Most of our customers appreciate the level of comfort and modesty.’’

“They’re not sexy. They fit your body where they’re meant to,’’ adds Sophie. 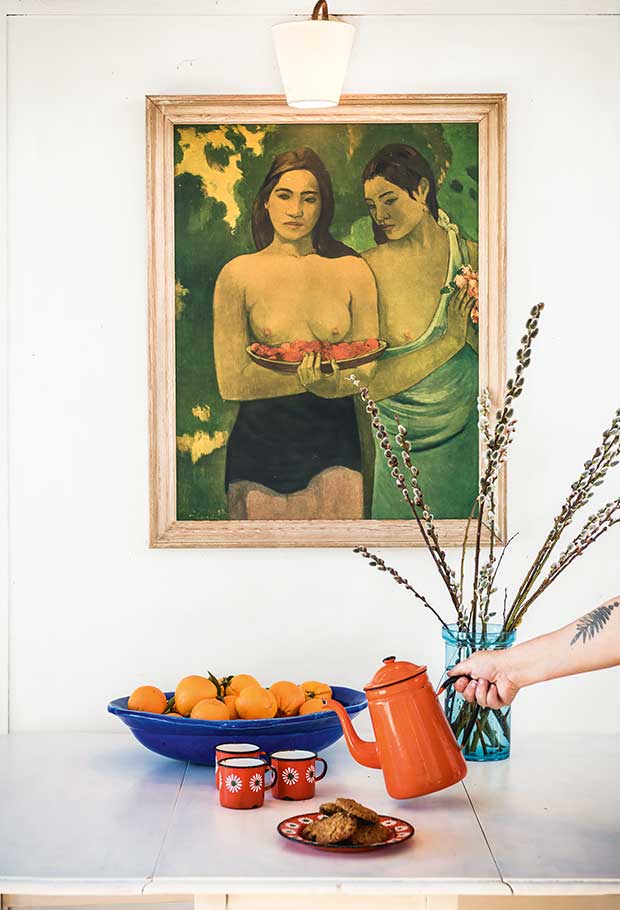 While Thunderpants are a snug fit for their customers, the business of becoming a clothing and underwear manufacturer wasn’t initially a natural fit for the Bidwill sisters.
They both started their adult lives as cooks, reflecting now that they weren’t given adequate career advice at school so fell into food. Their mother was an accomplished cook who passed on her skills to her daughters.

Their childhood revolved around food, and the collecting of it. They spent weekends foraging on the farm for mushrooms, pulling in crayfish pots at Riversdale Beach and collecting paua off the rocks. Says Josie: “Our house was always somewhere people wanted to come for food. Young single farmers randomly turning up at 5–5.30pm as they knew they would be asked for dinner. Teenagers were always happy to end up at our place after parties as Mum could feed large numbers with amazing food and plenty of it.’’ 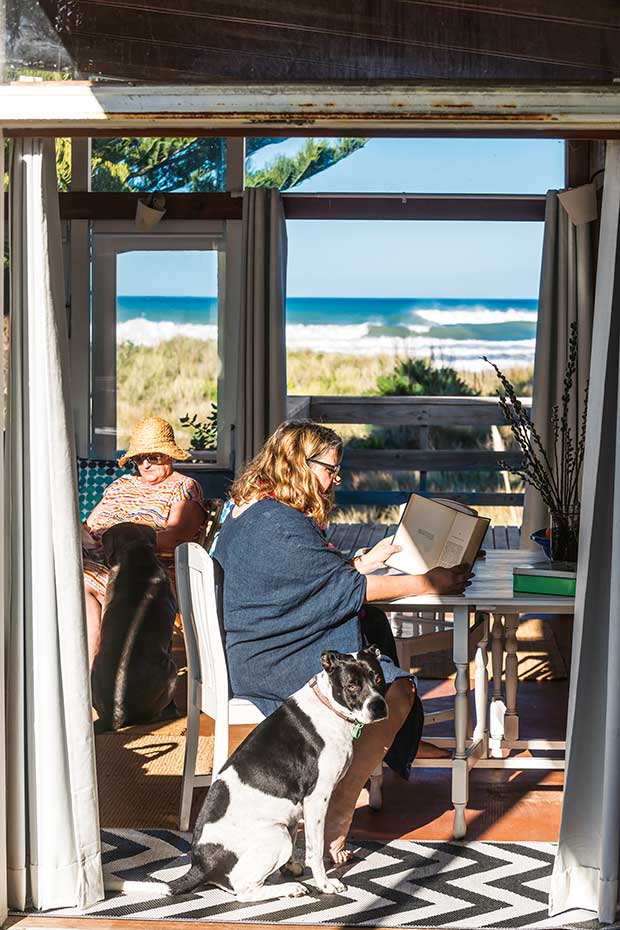 As children, the sisters spent weekends — sometimes even whole summers — at Riversdale, their mother literally shutting up their farm homestead and heading out there.

After Josie left school, she shifted to Christchurch to study horticulture but ended up working as a cook. At 19 and eager to travel, she hand-stitched 500 felt mice she then sold to fund a one-way ticket to London. She caught the craft bug from her maternal grandmother, Granny Chennells (Bee), who taught her how to make the mice, which were sold at a craft store in Greytown. After working in a London restaurant at the height of nouvelle cuisine, Josie attended Paris cooking school La Varenne École de Cuisine. “It was full of Americans, taught in French and translated. There was a guest chef every week – mostly Michelin-starred. My favourite was a woman who did everything with a paring knife.’’ They remember regularly piling into the family’s Mini Moke so their dad could drive them along the beach to collect shellfish off the rocks.

Back in Wellington in the late-1980s, Josie cooked with Peter Gordon when he was firing up the Sugar Club. Gordon moved into her Karaka Bay flat. “Wellington was really small. I loved it. The place was full of characters.’’ While Josie went to Australia – cooking in the West Australia mines and then in Port Douglas – Sophie left school and took over Josie’s former Wellington life. She moved into Josie’s Karaka Bay flat, got a job in the Cuba Street fashion store where Josie once worked, and even took over Josie’s job pasting posters on lampposts to make extra money.

More stories you might like:
Queenstown Artbay Gallery founder Pauline Bianchi on why she trusts her gut instincts

But eventually Sophie had enough of the heat of the kitchen and followed her real passion, enrolling for a visual arts degree at Nelson Polytechnic. At 24, she got pregnant so Josie returned from Australia to help her little sister plan an open adoption and to be there for the birth. The sisters drove to Pukekohe to meet the baby’s future parents.  (Sophie’s first daughter is now 25, lives in Auckland and is part of the Bidwill family.) 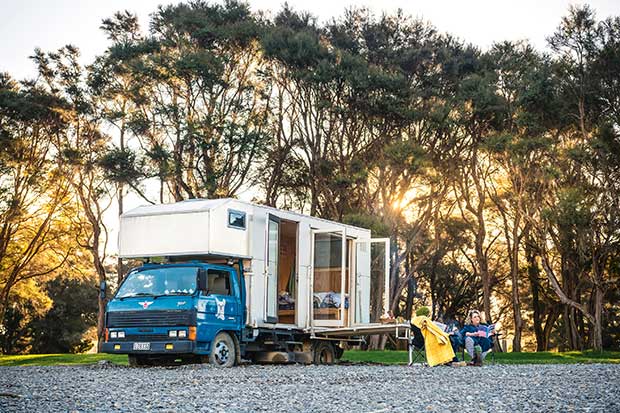 When Sophie was in her third year of study, Josie decided to follow her sister to Nelson. At 30, she enrolled for a diploma in fashion and textiles in Nelson. “Textiles was my first passion. I was in the art or sewing room any spare time I had.’’ One of her polytechnic assignments was to design comfy undies that “don’t go up the bum’’. In 1995, with her friend and flatmate Victoria McKenzie, she screen-printed $30 worth of fabric, sewing it into the first Thunderpants, which the duo sold in a Nelson gallery. Josie says her whole flat was taken over by undies. “We spent many hours drinking coffee on our veranda plotting Thunderpants world domination and cutting wood blocks for the original screen-prints. They were fun and exciting times planning our first commercial run.’’ 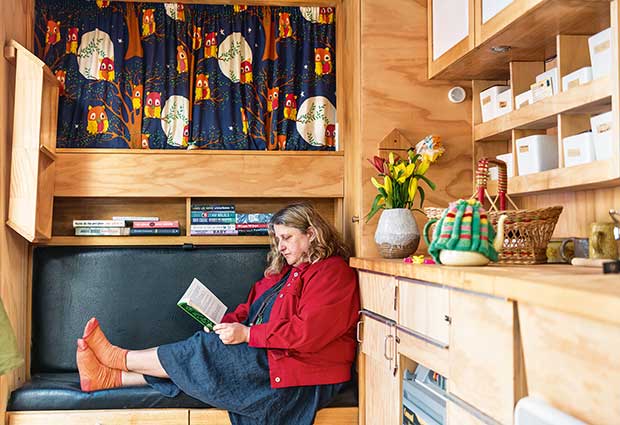 Sophie in her house truck where she currently lives while building a house on her property. The existing house is the former Martinborough Plunket rooms, where Sophie has her ceramics studio and her kitchen quarters.

When Victoria moved to Auckland and left the small business two years later, naturally Sophie stepped in. The sisters moved to Martinborough that year to be closer to family. The original Thunderpants came in three colours (aubergine, rust and broccoli), screen-printed in three patterns (limpets, artichokes or hearts).

“Not very girly,’’ says Sophie. A year later, they opened a retail shop on Martinborough’s main street. “We were so excited to be opening our store that on Boxing Day we painted the floor of the whole shop. We were so fired up we did, actually, paint ourselves into a corner,’’ says Sophie.

Sophie in her studio making ceramic pieces that will be pit-fired and turned into necklaces — she wears one in the next photograph.

Fast forward to today, and Josie is the boss, nicknamed Tony, à la The Sopranos. “She’s extremely generous and suffers no fools,’’ says Sophie. “Sophie,” says Josie, “is very smart and intuitive and feral. We complement each other well.’’ The sisters are so connected that they have been known to finish one another’s sentences and to parrot each other. The women’s original Thunderpants, sizes medium and large, are still their biggest sellers. Asked about most popular colour, they chime in unison: “Black”. 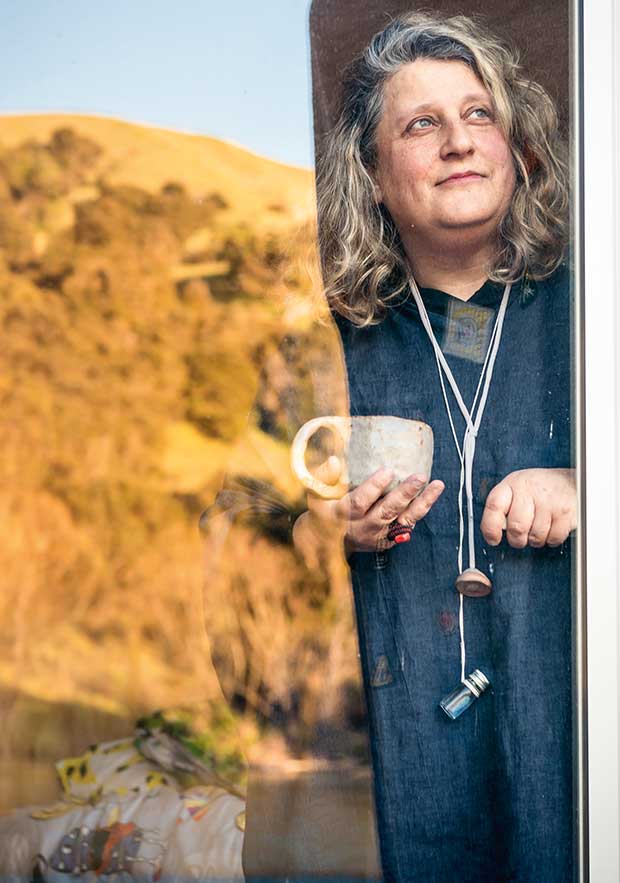 The cup Sophie holds is made by local potter and friend Rachel Bartlett.

THE SUCCESS SECRETS OF JOSIE AND SOPHIE’S FASHION BUSINESS 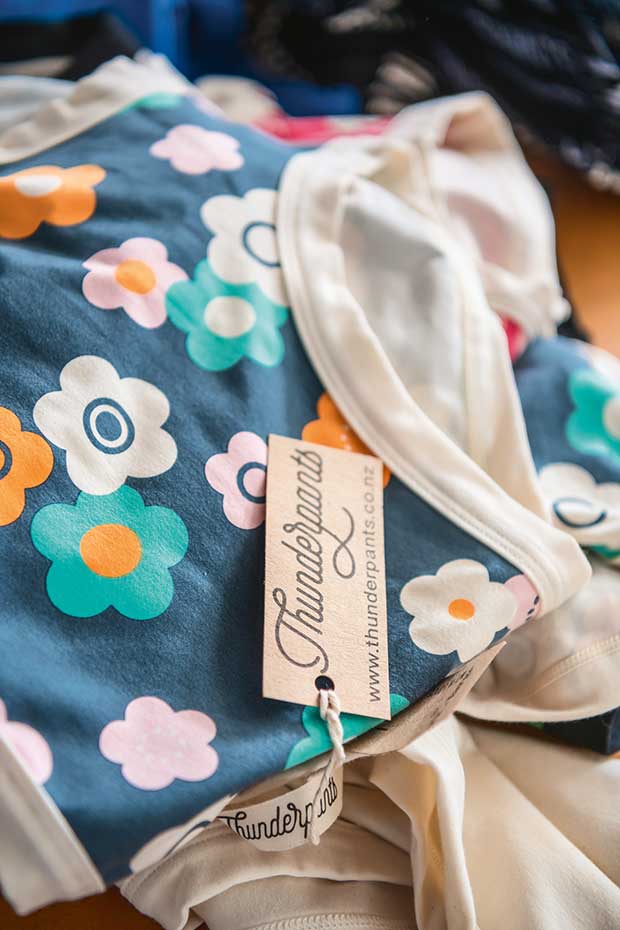 Careful costs: Being based in Martinborough means low overheads, especially significant in the set-up phase

Being modest: “We don’t need the flash stuff. We’re often happy to make do,’’ says Sophie.

Attracting loyal customers: “We have some customers that have only ever worn Thundies undies. It’s an inter-generational thing – they grew up with Thunderpants,’’ says Josie.

Being prepared to change with the times: “We have changed our model so many times over the years to accommodate being predominately New Zealand-made and have now ended up with an online business,’’ says Sophie.

Being transparent about the supply chain: The sisters source material from one supplier in Auckland, and a team in Carterton make the garments. “It’s essential that we retain the ability to get things locally. We wouldn’t have been able to do what we did in 1995 if we had to look offshore for everything,’’ says Josie.