The Italian/Maori romance behind the Cinema Italiano Festival Whanau, film, theatre, love and Neapolitan sauce are paramount in the lives of a super-creative couple who have masterminded the revival of Italian cinema in Aotearoa.

It’s just as well that Renee Mark decided after practising law for a year that it wasn’t her scene and quit. “I must have watched too much television with lawyers dressed in power suits.

“I’d imagined myself embroiled in courtroom litigation but, in reality, I worked in conveyancing and my inner spirit was dying. It wasn’t the most transcendental experience and it showed me that I wanted to pursue something bigger than myself.”

At the time Renee’s lawyerly pay-packet helped support the now-iconic bohemian café Fidel’s in upper Cuba Street, Wellington, which she co-founded. When Renee turned her back on law it was a bold pronouncement. Of Ngāti Tahu, Tūwharetoa and Te Arawa descent, she was the only member of her wider whānau to attend university and there was no absence of expectation from her family in Hawke’s Bay.

“It was a big deal and there was enormous pride. My father is pākehā and my mother is Māori and one of 21 siblings. When I graduated from Victoria University with law and a BA in Māori, a busload of family supported me.”

But imbued with her mother’s fearless spirit and strong values – Lorna Mark received a Civic Award for services to welfare in 1995 for her dedication to the rangatahi (youth) of Ngāti Kahungunu – Renee plunged from the rigidity of conveyancing into the inventive realm of writing, publishing and research. Renee in Tainui Reserve near the family’s Havelock North home.

“In the first six weeks after leaving my law job I wrote the most appalling novel – a dismal failure on a literary level and a clumsy fictional treatment of my political discontents. But it helped me understand that I wanted to work with Māori organisations.”

Propelled by pluck, Renee went to Huia Publishers in Wellington – a producer of books with a Māori or Pacific perspective – and asked to see the manager.

“I was so naïve. I said, ‘I have a law degree, I love writing, I love books and I have a strong interest in Māori, are there any jobs please?’”

Her audacity paid off. A starter role in the book department became a springboard for a highly engaging career which has encompassed creative production for leading Māori theatre company Taki Rua Productions, strategic planning, writing and researching for television companies and a seven-year stint as head of Te Paepae Ataata, New Zealand’s national Māori film development organisation. Eleven years ago, in the auditorium at the Auckland War Memorial Museum, her life flipped on its head.

“I was a researcher for a television show called Here To Stay about Italian immigrants in New Zealand and I went to a performance of Strange Resting Places about the Māori Battalion in Italy, co-written by Kiwi actor Rob Mokaraka and Italian playwright Paolo Rotondo. We had Paolo earmarked for the series. I met him after the show.”

While the multi award-winning production draws on the cultural clash and connectivity of Italians and Māori in a poignant war-time setting, Renee and Paolo experienced their own romantic collision.

Love at first sight has since converted itself into an engagement on Capri, two Italian/Kiwi tamariki, Sofia (9) and Dario (8), and a bilingual household, first on Waiheke Island and for the last two years in Havelock North.

Paolo says there is a powerful synergy between Māori and Italian. “For both peoples the cult of the individual doesn’t exist – life is about whānau, the importance of sharing food, song, intergenerational living, spirituality, tūrangawaewae or, in Italian, di dove sei,” he says.

“Through Italian eyes I connect to the passion and emotional aspects of Māori culture and I deeply relate to the pride, care for ritual and living with history.”

Whenever Paolo returns from Italy he mourns the loss of “the two kisses on both cheeks and the affection it holds” but says the hongi fills the gap. While the hongi connects Paolo with his beloved second homeland – “it is a privilege to live in this country” – when he arrived in New Zealand from Naples aged 11, he thought he’d come to another planet.

“It was traumatic. I couldn’t read or write English, I spoke the language with a poncy accent and I had frittata in my lunchbox. We had to go to a health food shop to buy olive oil.”

Paolo’s Italian father, Fabrizio, from an aristocratic Neapolitan family whose patronage of the arts stretches back centuries (and benefitted 18th-century Italian composer Rossini) and his Kiwi mother, Margaret, from Titirangi, met on a train in England in the 1970s. Paolo with son, Dario, Renee and daughter, Sofia, on the terrace. The children are bilingual and deeply connected to both parent’s cultures. Renee’s father, Eric, lives with the family – a source of great joy. “We are huge supporters of intergenerational living. We are very respectful of each other, we eat together, our children see their grandfather every day and there’s another voice in their lives apart from ours.”

“My mother was intrepid. Her own mother passed away when she was 19. She studied business then she and her best friend went on their big OE. The two Kiwi girls met my father and his cousin on the train. Both couples married.”

Paolo’s parents lived in Naples for 20 years but the family’s high-profile status combined with agitation over mafia kidnappings spurred a decision to emigrate to his mother’s country.

“Naples is a city of extremes and the disparity between rich and poor is insane. Our home accessed a private beach and the mafia used it as a drop-off for contraband. Our family dog was poisoned to stop it from barking.”

While a new life in Titirangi brought freedom and respite from the political unease in Naples, the move proved too difficult for Paolo’s father – the marriage ended and Fabrizio returned to Italy. “My father was an old-worldly chap, an idiosyncratic Neapolitan man who always wore a three-piece suit and was a fish out of water in New Zealand.”

“When I played soccer at school, he’d drive his car across the playing fields then lean on the car bonnet in his suit with a cigarette. All the other fathers were in shorts and gumboots. It was embarrassing but hilarious.”

Over the ensuing years Paolo has zigzagged between Italy and Aotearoa. A week after he finished boarding school in Auckland he left to study at the University of Perugia where he discovered literature, theatre and film. 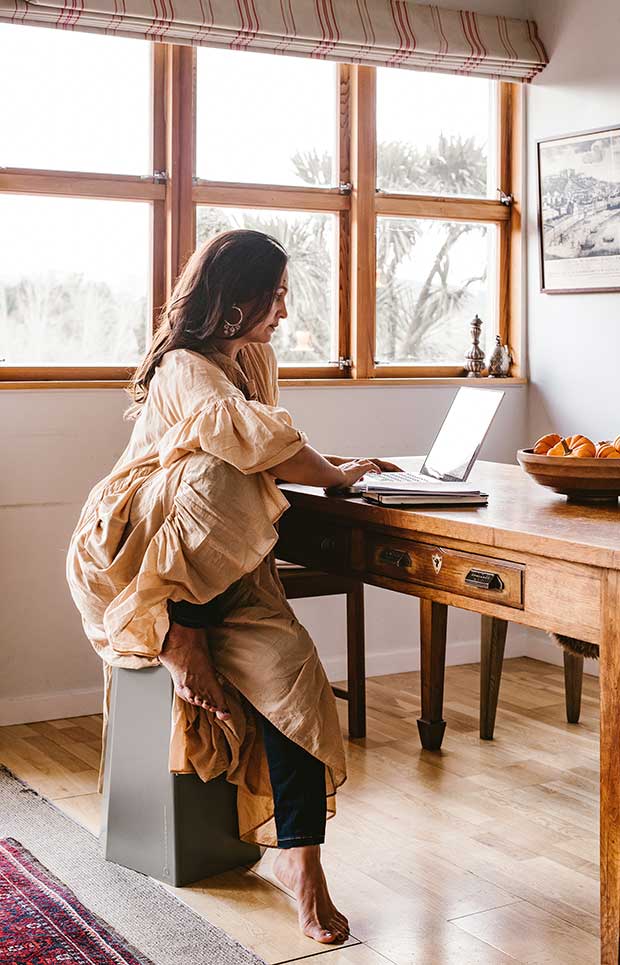 Renee at work on an Arnold Circus Stool by Italian designer Martino Gamper. Her dress is by Auckland designer Mahsa. In 2013, Renee was a recipient of a prestigious Arts Regional Trust: Te Taumata Toi-a-iwi ART Venture award – an action learning programme for high-achieving Auckland-based creative entrepreneurs. The skills she learned proved invaluable for her role with Cinema Italiano Festival.

Fueled by pressure from his Neapolitan family to ‘get a proper job’ he returned to New Zealand to study architecture at the University of Auckland. But his studies were short-lived and he exited to immerse himself in designing theatre sets, playwriting and acting. “My father said, ‘Oh my God are you serious?’ but I took comfort from the fact that my Italian whakapapa had long appreciated the arts.”

Along the way Paolo has studied acting in Paris and London and has appeared in a raft of New Zealand feature films and television series including The Ugly, Stickmen, The Insider’s Guide to Happiness and Shortland Street. His plays include Black Hands and Little Che, two award-winning short films The Freezer and Dead Letters and the feature film Orphans & Kingdoms.

In addition he’s been the recipient of a New Zealand-initiated scholarship for Italian film-makers to study at the famous Cinecittà Studios in Rome and a Shakespeare’s Globe International Actors’ Fellowship.

His latest play Kororāreka: The Ballad of Maggie Flynn, about a feisty Irish woman who arrives in New Zealand as captain of a whaling ship, is currently touring New Zealand.

“It’s inspired by my mother who has a beautiful strength of character. I don’t think it’s any coincidence we have strong female voices in New Zealand – Kate Sheppard, Jacinda Ardern, Merata Mita, Dame Whina Cooper – it’s our cultural conditions. I hope my daughter will be part of the same tradition.” 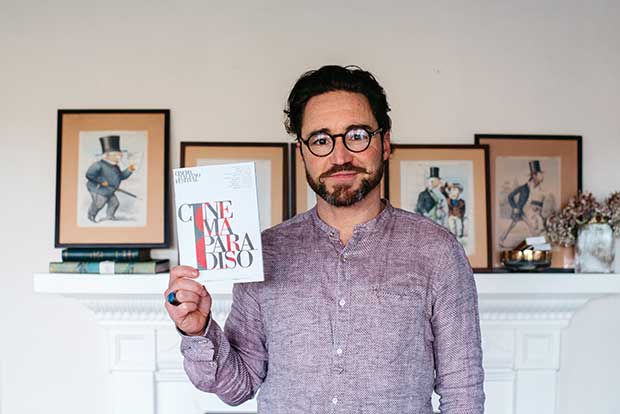 Paolo and the festival programme filled with Italian cinematic treasures. The caricature prints on the mantelpiece are early 19th century Neapolitan residents and are from Paolo’s family home in Naples –– a large homestead with a chapel in its grounds. Renee and Paolo operate an online shop, Effetto Brama (on the Cinema Italiano Festival website) which sells a finely-curated range of Italian products.

Three years ago Paolo and Renee pooled their creative brainpower to take the helm of New Zealand’s annual Cinema Italiano Festival. With the demise of the old festival, the couple didn’t blink at the challenge.

“Our friends in the Italian community were very supportive. Over the years Italian cinema has allowed me to keep my connection with my culture,” says Paolo.

The pair attends the annual Italian Film Festival in Melbourne and source most films through Australasian distributor Palace Films. “Italian films are beautiful, outrageous, cheeky, comedic, passionate and delivered with a rich self-awareness. They poke fun at themselves, there’s a touch of Māori humour and nothing is too PC,” says Renee.

The couple says New Zealanders are hungry for culture and diversity and they seem to love all things Italian – design, food, fashion and film. “Provincial New Zealand is now worldly and sophisticated. A while ago if I wasn’t wearing typical Kiwi-bloke clothes I’d get a look of ‘steady on mate what’s that about?’ Now that would never happen,” says Paolo.

What does still happen occasionally is Paolo’s profound longing for his childhood city of Naples. “Napoli is a sub-tribe. It’s ridiculously chaotic and the rules almost apply in reverse – if the lights are red people drive, if they’re green they stop. It’s beautiful, ugly and the poverty breaks my heart.”

But when the ache for Naples presents itself, Paolo turns his hand to his eternal comfort food – a simple Salsa alla Napoletana sauce made with San Marzano tomatoes and served with rigatoni. Eaten at the kitchen table with Renee, the world is once more in sync.