First chemistry, then food, followed by painting and now sculpted and wearable art — for several decades, this artistic soul has been fully occupied creating what inspires her.

It must have been an odd moment in a busy London kitchen when a chef, so struck by the beauty of the dish she’d just created, stopped the waiter from serving it while she quickly sketched it.

That first drawing of aubergines and peppers in ratatouille was when Amanda Kemp started creating art for its own sake. Before that, while working in eateries to support her science studies at Otago University and as a chef in London, her focus was on building a career she hoped would take her to the top of the culinary world. 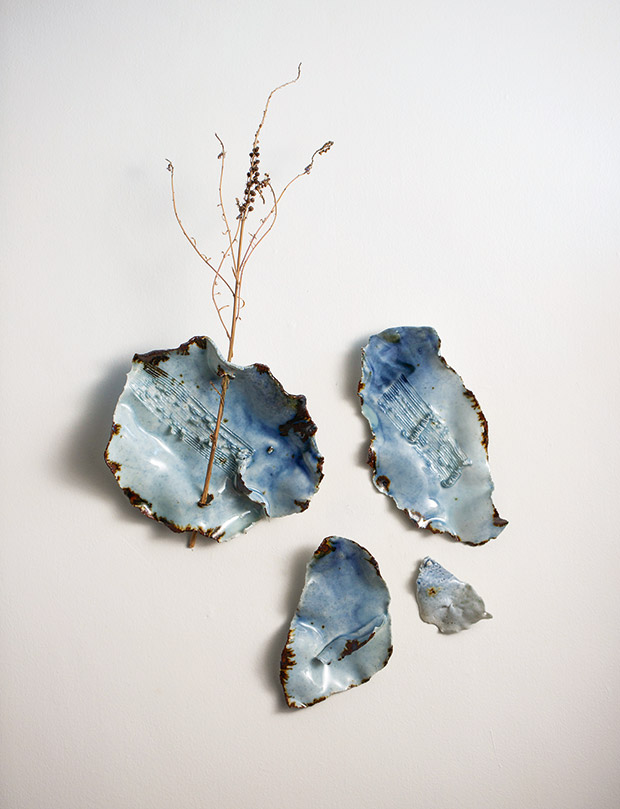 “Porcelain is a challenging product to work with, and I had to go through many different clays before I found the right one for me. Called southern ice, it is beautiful, and its fine texture contrasts with the organic items I also use, such as mud, soil, and stones. My pieces, whether wearable or wall art, involve the chemistry of glazing and firing.”

But beauty, in whatever form and colour it presented, was not something Amanda could overlook or ignore. “I was often mesmerized by the beauty of the food and, if I had an opportunity, I’d sketch a dish before it went out to the table. Other times, I’d photograph it or commit it to memory. Then I’d go home to my little flat in Battersea and paint what I had cooked that day.”

When she took two paintings to a framer, he asked if she had any more, saying he loved her work and owned a gallery. He would like to exhibit them. That’s how a young Amanda Kemp, born in the small Gisborne town of Manutūkē, had her first exhibition in trendy London Docks. Amanda’s studio at the art collective Further Doings in Auckland’s Grey Lynn is also home to the talents behind Lil Ceramics, Mahy (leather bags), and Sly & Company (fashion). Amanda says they are a group of hardworking women with a mix of skills and are inspirational to work among.

At the time, she was head chef for Barclays Bank in the private dining room where bank executives entertained clients that included royalty and heads of state. (Prince Andrew, Duke of York, and a French president whose name she can’t quite recall…)

More stories you might like:
Springboard diver Shaye Boddington lands lightly on the planet with an innovative 14-sqm tiny house (with a full height bedroom and walkway)

“It was seriously intense, but I was so in love with creating food, drawn by the psychology of it and the emotional way it brings people together. At night back in my flat, painting what I had cooked that day was my way of preserving the beauty of it and de-stressing.”

Before the exhibition, Amanda had thought so little of her paintings, she stored them stuffed beneath her bed. She didn’t want to be an artist; her family wasn’t short of them, and she hadn’t been drawn to the life, not at all. The woodcuts are used in the making of her ceramics, and the oil sticks are for painting her ceramic prototypes. “My work has been about the big questions and diving deeper into who I am and why we are here. Trying to create this feeling and thinking in a visual form is challenging.”

“My mother’s side of the family — Rongowhakaata — are mostly creatives, with plenty of colourful and eccentric chaos. Growing up, I didn’t want that life and the sciences became my go-to. But as I got older, my artistic DNA kicked in. I now incorporate art and science into my work and it creates a somewhat dynamic balance, which is integrated in all I am and do.”

Since art called and Amanda responded, she has explored many different mediums while rearing her two children (now in their 20s). When her British visa expired, she returned to Auckland after two and a half years, moving from Titirangi to Muriwai before settling in the inner-city suburb of St Mary’s Bay. These days, she is a full-time artist. She uses recycled gold chains for her wearable art and likes to insert natural materials, such as grasses, into her wall art.

“The inspiration behind my work has ultimately been grounded in nature, so moving from Muriwai into the city was in some ways a difficult transition,” she says. “I had to shift out of my comfort zone, decide where I was coming from and find my sense of self in the middle of the city.

“It was challenging, but I know the importance of occasionally moving out of your comfort zone. It takes you to an uncomfortable place that you must navigate your way through, which positively impacts your work. I now draw from many different places. My work still ultimately feeds from the natural world, but it has expanded.”

Her painting/sculptural work has, over the years, been recognized in various art awards and collections. One of her larger works, Mind 2012–2014, inspired by her interest in memory and consciousness, hangs in Auckland University’s psychology department. 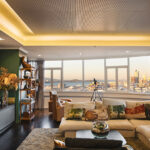 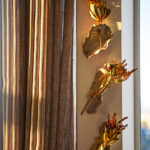 Amanda likes to bring nature into her home, inserting dried seed pods into her wall sculptures. 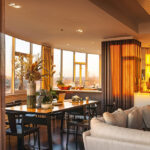 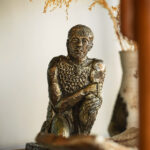 Today, Amanda is also skilled in another medium — ceramics. It’s another workable platform, sometimes incorporated into her others, she uses to express ideas. She is currently making art jewellery and wall sculpture and feels she has come a full circle back to her science studies. “Ceramics is very much based in science, and with the glazes, you might as well be sitting in a lab as it is all about chemical reactions mixed in with problem-solving.”

Southern ice, the porcelain clay Amanda uses for her jewellery, is a challenge to handle. “It requires a high firing temperature, which is a bit of a pain, but it makes it very strong for something that looks so fragile.

“It is so beautiful. I can create semi-translucency and the feeling of movement not readily associated with clay. It is like music; it moves, it flows, and the light passes through it.

“When I’m working, I have learnt to switch off my mind chatter — it creates a very pure state of creative flow and somehow helps with my growth as a person.” While her mind may be in a profoundly switched-off state when working, this is not the case when driving. She has developed a passion for raw clay and drives with one eye on the soil alongside the road and a sharp shovel in the car boot.

Proudly unearthing a bag of iron-rich clay from beneath her workbench, she says: “I often use hand-dug local clay in my sculpture work. It’s a powerful medium for representing tūrangawaewae [belonging]. The respect I have for the way traditional Māori culture connects with the natural world has become central to my sculpture work.”

More stories you might like:
How Willy Coenradi is reviving antique printing presses — one letter at a time

This passion for ceramics emerged seven years ago when she enrolled in a pottery course at Auckland Studio Potters in Onehunga. “I had the privilege of being taught by Peter Lange before he retired. It continues to be one of my happy places.” A collection of works that make up a whānau wall in the couple’s home. (From top) a historical scene of a waka on a lake, a painting that belonged to Warwick’s great-aunt, photographs of Amanda’s direct ancestors, including her nana Huia, auntie Heni and great-grandparents Thomas and Matahaere Halbert, whenua vessels that were salt-fired in a wood kiln for 24 hours, and an anchor stone.

With skills across several artistic forms, she is still unsure how she chooses which medium to use. “It is feeling, not a head thing. It doesn’t come from thinking. It’s deeply intuitive, more like: ‘It needs to be this clay with this glaze and this drawing in this colour.’

“It is not something that I plan and write down. Ideas often come to me when I’m not thinking about anything — say, walking or half asleep — and I have no choice; I literally must create it. But it’s not easy turning a feeling or idea into a visual form.” In pre-pandemic days, when Warwick headed overseas each European summer to work in international sailing regattas, Amanda generally stayed home except to join him for a few weeks.

Amanda says that making jewellery from ceramics was a massive call as people do not generally associate the two. “There was nothing out there that looks like what I am doing. It started when I took things out of the kiln, and I felt some pieces had a jewellery element to them. I modified them to wear, and when worn, they drew admiring comments. I realized they are still sculptures, like my wall sculpture but in a wearable form. Although creating something new is exciting, it can also make your life more demanding as a workable artist.

“There is sometimes tension between what the gallery wants you to make, which is often familiar and sellable. But it’s essential to keep that authenticity and integrity about who you are and, in turn, what you create. You have to believe in what you are doing, and it can be tough to do while people transition with you. New takes time.

“You learn to ride these times out, trust in yourself and what you are doing. And, as an artist, you don’t just do that once in your life but multiple times. It’s a vital component in creating anything authentic.” 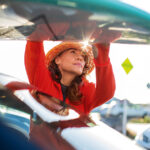 Daily paddleboarding from the city beach near their home keeps this pair connected to nature. 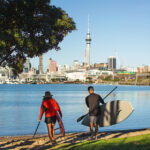 Warwick feeding his need to be on the water, Amanda refueling her energy by being outdoors. 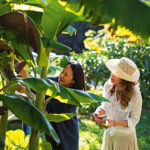 Amanda’s good friend Jenny Yee Collinson (@culinaryjourneys) is also originally from Gisborne and takes her on regular food and foraging expeditions. In Kelmarna Gardens, near Amanda’s home, she and Amanda check a babaco tree for edibles and look out for wild greens, fruits, and anything else edible.

While her primary market is New Zealand, this coming European summer, Amanda is branching out to promote her work in Spain and Portugal, where her international sailor partner, Warwick Fleury, is likely to be working. She says European galleries find it valuable to offer beautiful works at attainable prices since they attract customers to the store. “I found art jewellery is now in most contemporary galleries over there.

“Being an artist isn’t the easiest of roads, but I feel inspired by what I’m doing and where I’m heading. There is so much more to learn and do, and I’ll be open to all of it.”