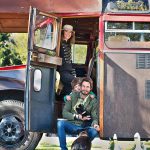 All aboard the 1964 Bedford J4. Mels takes a perch, Koco steals a piggy-back, Jonas snuggles Pepper the chihuahua and Lola the staffy looks for a cuddle. 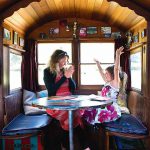 Having lunch in the booth 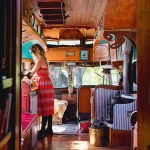 Water for washing dishes comes from a 200-litre fresh-water tank, hot water is care of the gas califont, drinking water is filtered. 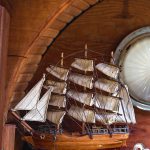 The sailing-ship look of the bus was always the plan. Mel and Jonas love all things nautical. 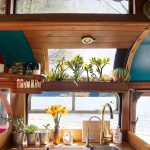 The kitchen is tiny but Mels is adaptable and used to tiny kitchens. 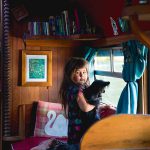 The swan cushion is from Iko Iko and the picture on the wall Mels bought in Amsterdam. 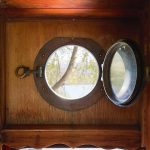 The porthole comes from a ship called the South Seas, which sank on 19 December 1942 after a colliding with the inter-islander ferry while on patrol as a minesweeper. Her wreck is still in Wellington Harbour. Mel’s dad Ivan salvaged it in the 1980s. 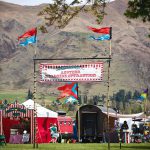 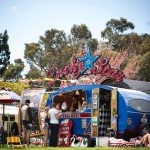 The glitter sequins in the lucky star sign come from Canada. 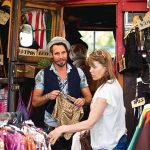 Jamal helps out when exams are finished and school is over for the year. ‘This will look great on you…’- Jonas sells clothing the couple designs and imports. 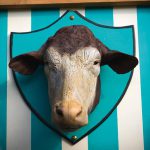 The mounted cow’s head was cast in silicon from an actual cow for a horror film by a friend who worked for Weta Workshops.

Life is a movable feast for these house-bus-living, fun-loving, free-spirited ‘gypstas’.

Stepping up, up and away into the marvellous steampunk-meets-pirate-galleon interior of the home of Jonas Karsten, Mels Berg, son Jamal Berg (15) and daughter Koco Karsten Berg (almost 5), you half-expect to be piped aboard. Thrown a small parade, maybe.

With her snug cabinetry, high castles and a galley worthy of the Golden Hind, there’s more living than you would think in 20 pipsqueak square metres, and a definite maritime murmur. 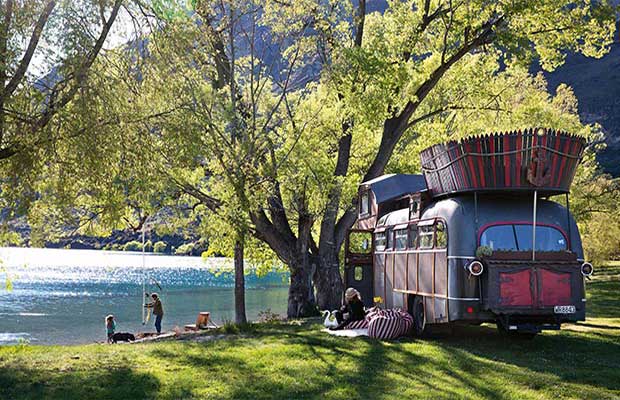 Add the gentle rocking of the wind, the creak of timber and your imagination sets sail on hurdy-gurdy tides.

Much of this whimsy has to do with Jonas’ self-taught approach to alterations. In a feat of solar hydraulics only possible if you didn’t first know it was impossible, the roof hatch lifts thanks to a 12-volt Hitachi drill, driving a caravan stabilizer.

The entire bay window pops out by virtue of a mechanism made from skateboard bearings welded into steel tubes; the whole thing so light (“we can push it with our legs”) even when occupied by Lola the staffy (moist brown eyes requesting attention and a spot under your armpit) and Pepper the chihuahua (a bit of an ornament chewer, I’m sorry to report). 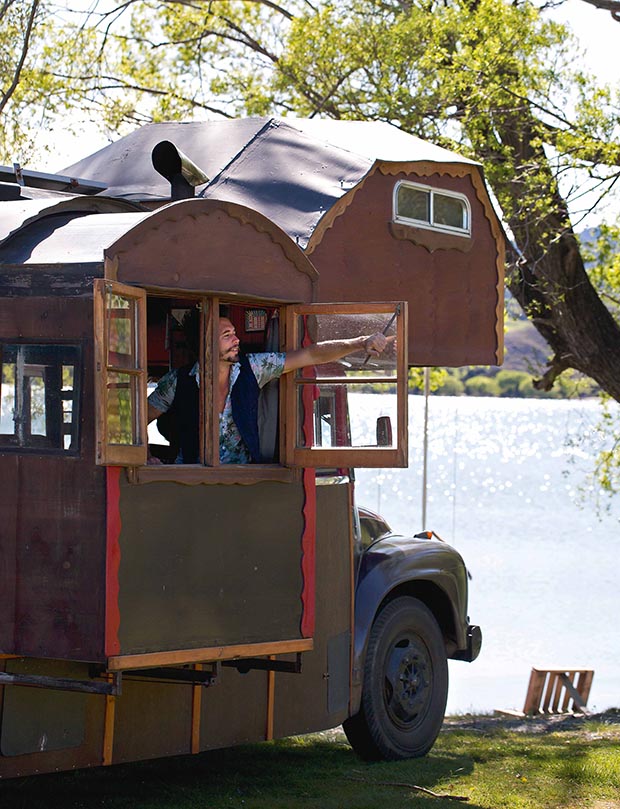 Jonas opens the windows of the hydraulic pop-out. Most examples of these are square and boxy- he wanted theirs curved, with a vaulted timber ceiling, which only made it more of a feat of engineering and carpentry. A robust construction, it glides out light as a feather on its skateboard bearing-filled rollers.

Brass portholes come courtesy of Mels’ father, Ivan, who used to be a shipwreck diver. An intricately-wrought stepladder pulls down from the roof space (the original ceiling was the first thing to go, sliced and removed like the top of a boiled egg) to allow access to a picket-fenced stern.

Climb up, high enough to see forever, and it’s impossible to resist a “Yo ho ho!” − mezzanine sleeping quarters making a bosomy prow for this rambunctious ship of the road.

White lines and blue skies are in the blood for Mels, who grew up in Wellington, travelling the country with her dad on the back of a motorbike during the school holidays. 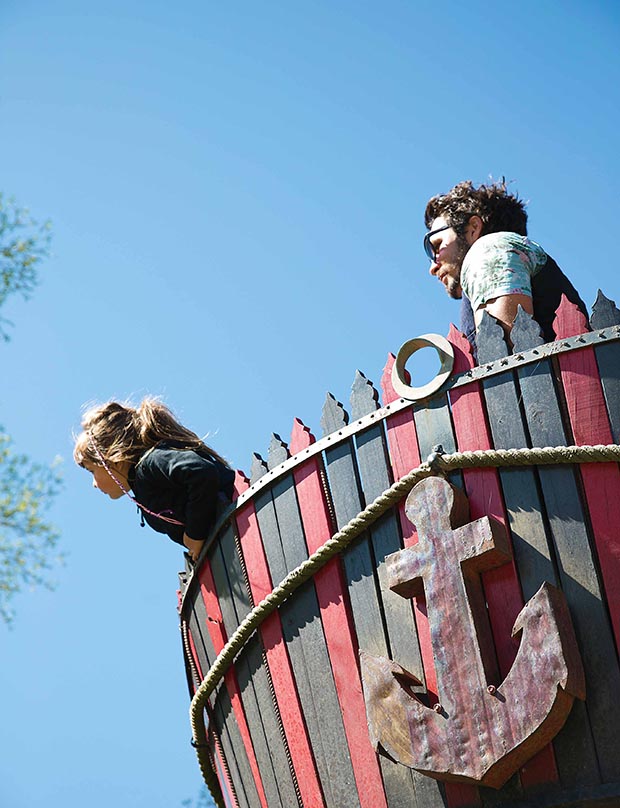 The steel anchor is made out of old oil drums and imported from Bali.

Jonas, child of more permanent fixtures, arrived from Bonn, Germany, with plans to backpack the world. They met at the 2003 Big Day Out in Auckland. Mels working as a chef in Wellington at the time, it was there Jonas followed her, and to the Capital’s Whopper Chopper − a beach festival that has been a huge influence on their lives.

Having found love in a windy place, “why don’t you buy a house-bus?” said Mels’ dad (“Poppa” to his grandchildren), a man who so prefers wheeled accommodation, he moved out of his own home to live parked alongside. A 1964 Bedford J4 bought from a Dannevirke hippy, the house-bus was, in a former life, the Mt Cook school bus and 50 years of fine, silty, dust fell out of her channels when Jonas cleared them recently.

She leaks in a West Coast storm, weighs several ton and *lowers voice to whisper* has had some work done: three engine replacements, in fact.

She’s caught fire, been electrocuted, lacks power steering so corners like a tank, needs to be rocked out of stall position and climbs hills like a decrepit Sherpa. A motorised Blanche Dubois, relying on the kindness of strangers; luckily people are lovely, says Mels. Maybe it’s also, suggests Jonas, a respect for keeping old things on the road. Vintage cred in a world of Tupperware vehicles.

“To begin with I thought one year picking apples,” says Mels. It’s been 12, some spent creating chill-out zones – “bubbles of calm” – and running stages for gatherings such as Splore, Parihaka, Womad and Cuba Dupa.

Now, as Another Roadside Attraction, they’re touring the Gypsy Extravaganza, a festival of their own with 25 stall-holders, 30 trucks, 16 caravans and a mobile stage, tootling the highways and byways of New Zealand in a rustic cavalcade. 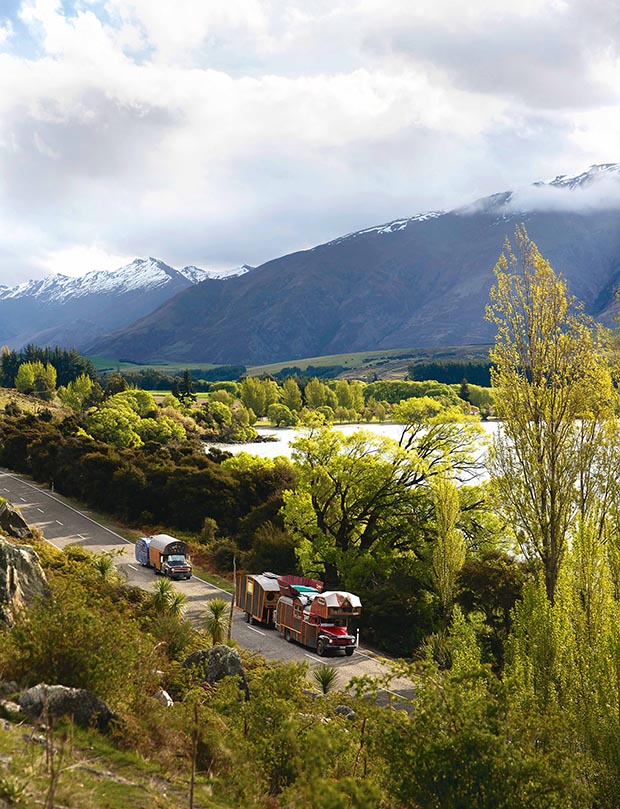 October to April is when you’ll find them, circled on green domains, top to bottom of the North and South Islands, backs to the dark elements of boredom and blandness. Jonas, silver buttons on his pea coat, moustachioed and top-hatted, sells the fabulous range of women’s clothing they design (and import), while Mels makes a hair-lifting brew inside the bedazzled Lucky Star, the coffee and juice caravan they tow with them.

The ease with which they do this belies the problem-solving pioneer ingenuity behind it. All the fun of ye olde-worlde fair, the Gypsy Extravaganza is a lovely controlled chaos where children turn somersaults, bunting flaps, dogs smile and sunshine twinkles on glittery signs.

Associated showbiz silliness such as the mounted silicon cow’s head made by a friend who worked for Weta Workshops add to the festival of colour and music staffed by folks from vastly different walks of life: an ex-rocker turned candyfloss stocker, Swiss baker now bead maker, a tattooed lady peddles the peddle-powered merry-go-round… singers, painters, candlestick-dippers and hoola-hoopers – it’s certainly idyllic, like childhood memories of summer holidays, according to Mels.

But before you start looking for a sign-up sheet, imagining aimless days of hay-chewing indolence and genteel wafting, be warned: it’s fast-paced, focussed, extremely hard work getting a mad gala like this on the road, and keeping it there. 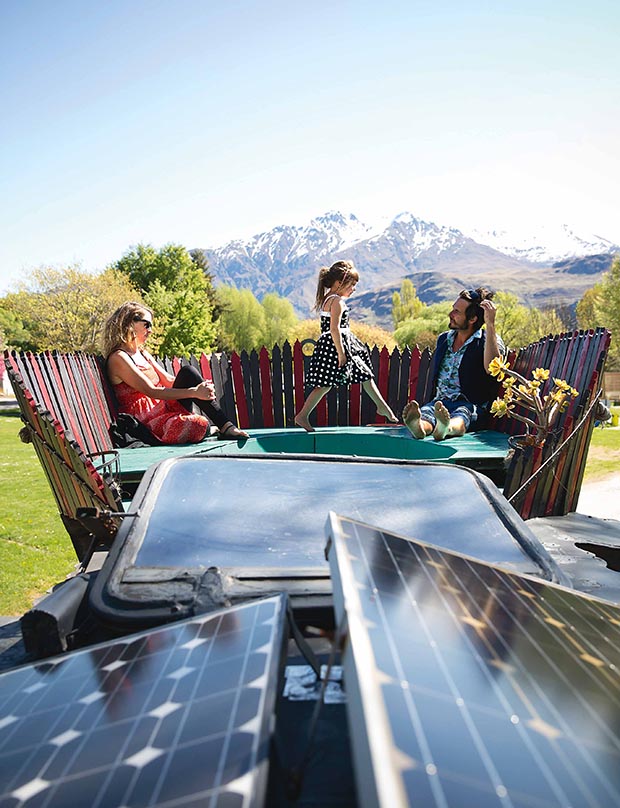 Two-hundred watt solar panels on the roof make enough power to run eight washing machines but who wants to do the laundry when you can sit on the deck Jonas built? Originally designed to take a spa, the logistics of filling and emptying proved ridiculous, so it’s now a conversation pit filled with pillows and cushions and “plants people give us,” says Mels.

Mels and Jonas’ contagious enthusiasm attracts newbies who need to be built a bus and shown the ropes.

“We’ve encouraged them to try this lifestyle,” says Jonas, “and so we feel responsible for them.”

Meaning breakdowns to manage, calls to city councils and newspapers to make, grey and black water to dump, not to mention the rigorous repetitive routine of packing in and setting up: one day to get there, one day to set up and a working weekend of nine-to-five-ing. Not a lot of time to contemplate your navel.

And, “if we park somewhere for three or four days we get itchy feet, feel we’ve been in one place too long”, meaning it’s soon time to pack it all up again, hitch Lucky Star to the towbar and hit the road.

As the wheels on the bus go round and round, the youngest children attend school by correspondence, older ones, like Jamal, go to high school. “They say it takes a village to raise a child,” says Mels.

“I’ve managed to raise both my children in a village, and it’s been wonderful.” Being around people all the time makes for confident, resilient offspring unbothered by a lack of mod cons, and a childhood spent taking on little jobs makes them great little entrepreneurs.

However, it’s not all swimming in hot rivers and waking to dawn pinking the treetops: May and June are spent overseas in India, Thailand or Bali on buying trips. July to September the family turn landlubbers, living off the grid in a cabin on 2.5 acres of land in New Plymouth that Jonas bought in a nesting panic the week Koco was due.

Reuniting with Jamal, attending New Plymouth’s Spotswood College and cared for here by his Poppa during term time; with a couple of big sheds and a workshop, this is the place to make repairs, deal with wear and tear and do the school run for three months.

“Soul-destroying,” says Mels, of doing the same thing day after day, and one can’t help but wonder what these two think of other people’s houses.

“Actually, our friends usually come to us. ‘Cos we’re parked down the road with the million-dollar view.”

ON THE ROAD AGAIN 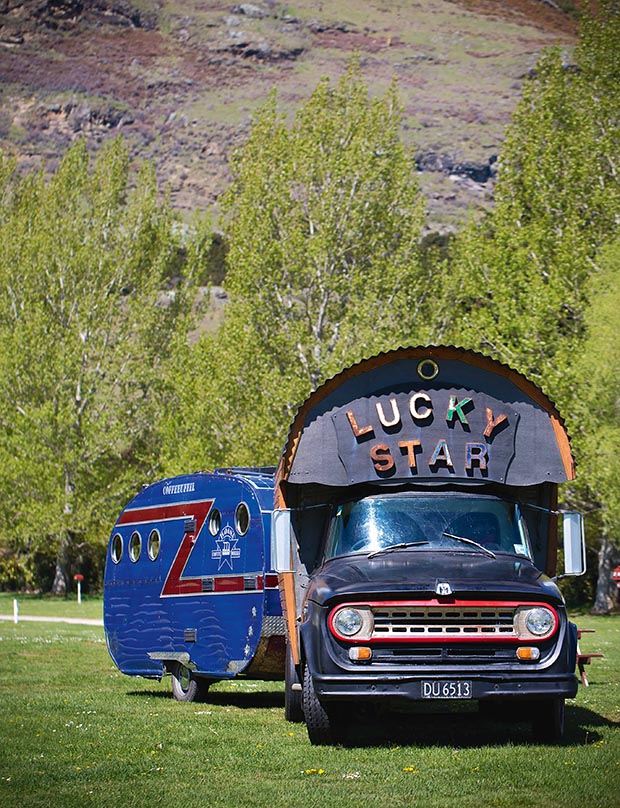 – Solar panels on the roof of the house-bus charge a 12-volt battery bank. An inverter converts it to 240 volts, normal household-appliance wattage. On a sunny day, you’d make enough power to run eight washing machines, lights and music.

– LED lights have revolutionized travelling homes, too. You don’t have to worry about turning them off, or being left in the dark and fumbling for candles, they last so long.

– New Zealand is really motorhome friendly. Every single town has a dump station for black and grey water, some more than one. Passing and repassing the boarded-up shopfronts of little towns, the freshly-painted war memorials of rural New Zealand, the car yards of cities, no one sees better the economic ebb and flow. The couple say they can tell when industry is dying, that when people have brass in pocket, it’s a real barometer.

– Mels and Jonas encourage others into a life of travelling, sometimes inadvertently. For two Greymouth stone masons, all it took was a look around the family’s house-bus as they were passing through. A year later, there they were, in the bus they had made themselves.

– Their house-bus once lost a cylinder on the way from Napier to Gisborne and took two days to wheeze over the long and winding road in second gear.

– Travelling 150-200 kilometres a week, Mels and Jonas offset the carbon of their year by donating to Million Metres Streams Project (millionmetres.org.nz). Food is sold in compostable packaging. “Some things are more expensive but they’re worth it. They make you feel better,” says Jonas.