Lucy Corry’s not one to swoon over a fine china cabinet, but that doesn’t mean she’s going to drink out of an ugly mug.

In the utterly charming TV series Ted Lasso, fictional AFC Richmond football team owner Rebecca Welton is the picture of perfect grooming. Her clothes are magnificent, her makeup and hair always on point.

Rebecca leaves nothing to chance; her appearance is a gilded carapace shielding her fragile core. She also only ever drinks her English breakfast tea (“tea is garbage water,” says her American colleague, Ted Lasso) from very fine china cups.

You might have missed this detail while watching, but I notice it every time. I think it’s because I have not paid enough attention to my own tea drinking vessels (or my ungilded carapace). If attention to teacups was a game, Team Lucy would have been relegated long ago. 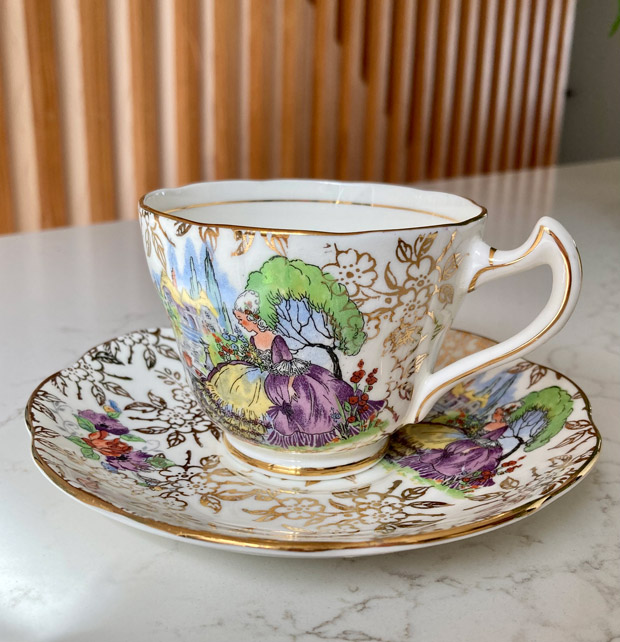 While I write this, I’m drinking a cup of Mr Dilmah’s finest from a pale blue mug that has the name of a mega-famous English chef on the bottom of it. The glaze is slightly speckled, so the outside always looks a bit grubby.

The inside is deeply stained with the ghosts of brews past. It is not an inspiring vessel. It’s the saggy sweatshirt of tea cups; the kind of thing you don’t want to be seen with in public. Rebecca Welton would be appalled.

The ridiculous thing about this mug and its matching three friends (why buy one ugly cup when you can have four?) is that they’re not the only ones we have, just the ones that are most convenient to drink from.

Both by accident and by design, I have a reasonably large collection of cups and mugs, acquired through family inheritance, op shop hunting and random gifts. They’re not as ugly as the specimens you find in communal office kitchens (none of them are chipped or covered in teddy bears, for a start), but many of them aren’t very nice. 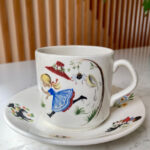 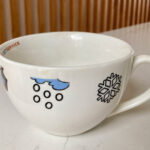 My sentimental favourite is the Kelston Ceramics ‘Nursery Rhymes’ cup and saucer I’ve had since I was a child. Now and then, when I’m feeling generous, I make my daughter hot chocolate in it.

My husband drinks his tea from something we call ‘the big boy cup’ — a huge, bowl-sized teacup emblazoned with weather symbols. I received it years ago after interviewing a meteorologist (she was so pleased with the resulting story she sent me the cup and its matching saucer as a thank you afterwards).

The saucer sat beneath a pot of lemon balm on the deck at our old house for years, but didn’t survive when we moved. The big boy cup isn’t attractive and takes up a lot of room in the dishwasher or sink, but it is very functional.

It certainly fits two or three times’ more tea than the very pretty china tea cups (mostly all with matching saucers and side plates) that we inherited from my husband’s Great Aunty Shirley. 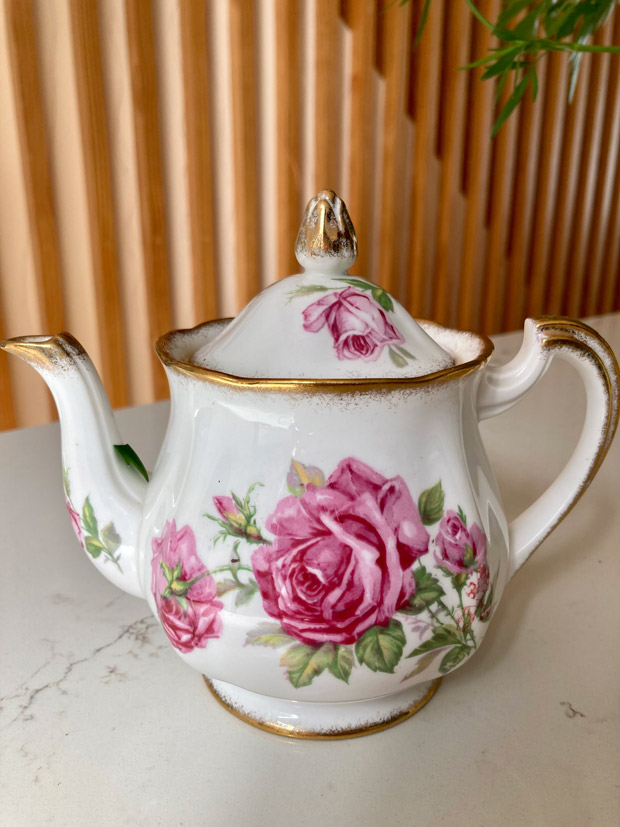 Before they ended up in my kitchen cupboards, these cups had been for display purposes only. Some of them must have been more than 50 years old before they ever felt a splash of tea hit their sides under my stewardship. For Aunty Shirley, the joy came from acquiring gilt-edged fine china patterned with flowers rather than using it.

I’d like to think she’d be happy to see it in service — and to know that I think fondly of her when I make a pot of tea in her pink ‘Orleans Rose’ Royal Standard teapot. I think appearances mattered to Shirley for more than superficial reasons.

For her, being surrounded by beautiful things was a way of telling the world that she mattered. Thinking about her has made me realize that if life’s too short to collect china you never use, it’s also too short to drink tea from an ugly mug.